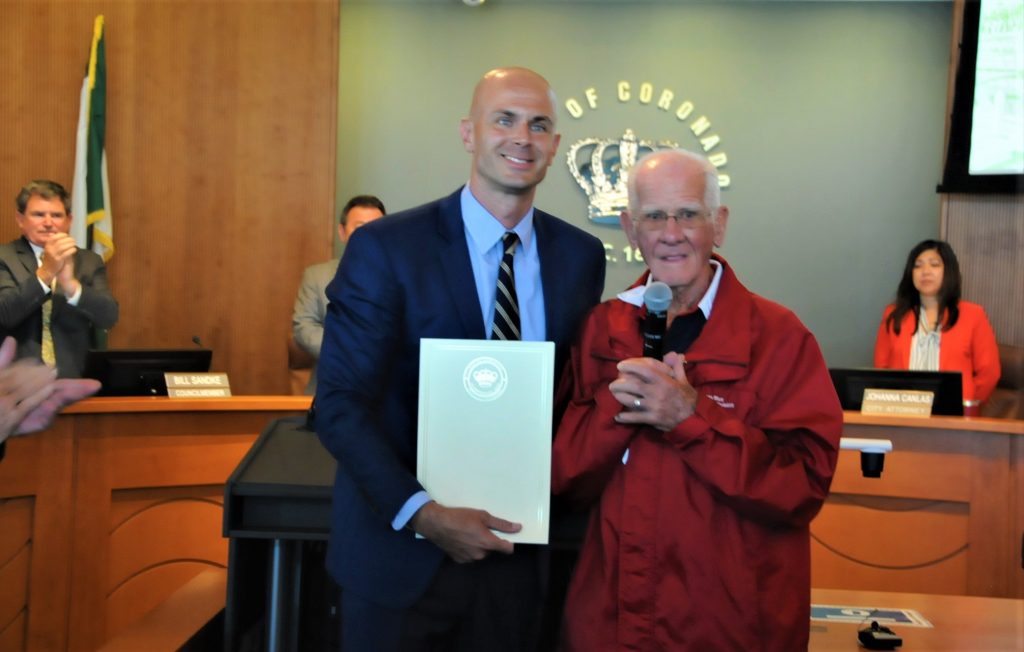 At 97 years young, Tom Rice is not just a notable resident of Coronado, but is also well known for his recent 75th D-Day anniversary jump. He was congratulated by the city council and received a standing ovation from the audience after Mayor Bailey presented him with a proclamation proclaiming June 6, 2019 as SSGT Thomas Rice Day. Rice is a 1940 Coronado High School graduate and enlisted in the U.S. Army in 1942. He was part of the elite 101st Airborne Division, 501 Parachute Infantry Regiment “Screaming Eagles.” He has jumped on D-Day to remember and to honor his fellow paratroopers since 2014 and plans to jump on D-Day until he’s 101 years old for the 101st Airborne Division.

The majority of the meeting was a lengthy discussion about the future of Utility Undergrounding, which has been four decades in the making. King pointed out that seven projects have been completed since 1999, (see chart) and presented a brief history.

It was noted that Coronado Cays is completely undergrounded. In January 2018, the Council retained Harris & Associates to develop a city-wide Utilities Undergrounding Master Plan which was completed and accepted by the Council in September 2018. Priority areas were determined (see chart) and community input was solicited. 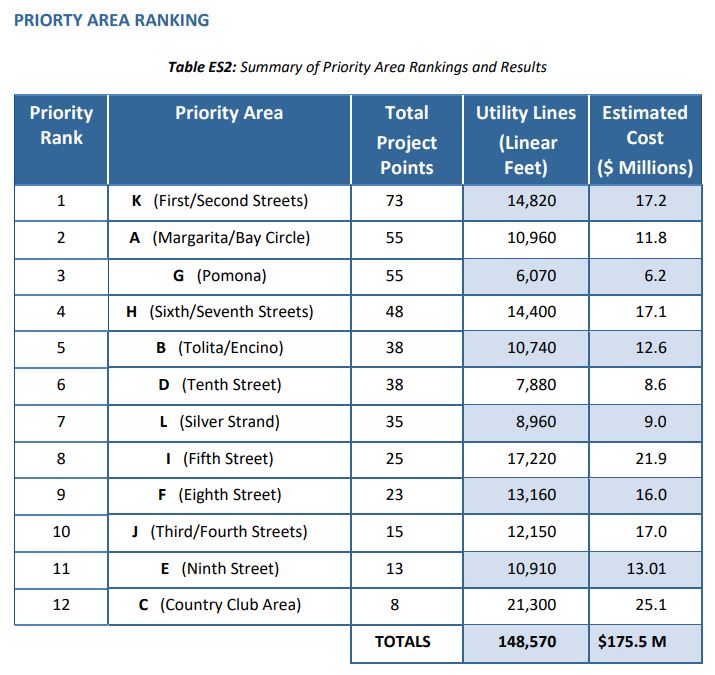 There was a lot of back and forth discussion amongst the council with everyone agreeing on the positive benefits of aesthetics, increasing home values and safety and the only downside being the cost. The Mayor proposed putting it to a public vote on the 2020 ballot, but Councilmember Benzian said “it is time to seize the opportunity with this unique long-term benefit for the community;” but pointed out, along with others, that residents need time to organize into Benefit Assessment Districts. Councilmember Donovan felt that the three-month assessment period should be extended to at least six months and said that “the longer we wait, the costs go up.” He also suggested pursing other funding options for the Silver Strand as has been done in the past with the Navy and federal funding. Councilmember Sandke mentioned that he was “bummed that no one came to the council meeting to voice their opinion,” and stressed that he and the council want the money to be used wisely and buy-in is an important element and agreed with Councilmember Donovan about sending a letter to all Coronado property owners. Star Park Circle was used as an example of an area that made undergrounding happen when the residents organized themselves.

As the discussion was winding down, the Mayor reiterated, “I want the community to have the option to form their own districts.” Councilmember Heinze agreed that this “put the onus on the people to help themselves.” After several attempted motions, two motions were unanimously approved. The first was modified motion number two to accept, for six months, non-binding petitions from at least 60 percent of participants from a minimum of 65 contiguous parcels; and motion five to direct the City Manager to initiate the design and cost estimates for undergrounding the Silver Strand Highway utilities within the timeline prescribed by SDG&E. Motion number three was modified and approved by Councilmembers Sandke, Heinze and Donovan with the mayor and Councilmember Benzian dissenting to wait six months, take into account any interest to form Benefit Assessment Districts, then proceed with City-initiated districts pursuant to the Utility Undergrounding Master Plan.

The council unanimously approved the proposed EDCO rate adjustments after a comprehensive presentation by Steve South, EDCO President and CEO. He said that the state of recycling is changing, as previously over 65 percent of recycling in the world was shipped to China, but now they have withdrawn from worldwide markets and India has withdrawn from the plastics market. “There has been a paradigm shift, it’s no longer a pot of revenue, and while it’s a more sustainable disposal option as opposed to landfills, it has a cost consequence,” South said.

The rate increase of $1.74 breaks down as follows:

Rates will increase from $19.71 to $21.45 monthly. Councilmember Heinze pointed out that Coronado still has the third cheapest rates of the 17 cities in San Diego County.

King said that the public was notified of proposed increases after the April 16 council meeting and allowed to voice their protest and concerns regarding the rate hike. Since only one protest was registered at the meeting, it fell short of the needed 3,631 protests for denial. King pointed out that it is a mandate from the state to reduce our organic waste and EDCO is our partner is helping do this.

EDCO is working on complying with the various California State Mandates for recycling with the two main categories including commercial organics recycling and methane emissions reduction. They plan to expand the green waste service to include food waste and will offer a residential kitchen caddie which is dishwasher safe and odor and bug resistant. South described their state-of-the-art Anaerobic Digestion (AD) Facility which produces renewable natural gas (RNG), assists in meeting state mandate, has a carbon neutral fleet that will begin serving customers in January 2021, which is when the new organics rates will take place. They will be launching a campaign to educate the public about how to participate in the new comingled organics recycling program.

The agenda item concerning combining the FY 2018-19 and anticipated FY 1019-20 annual street preventative maintenance projects was pulled from the Consent Calendar by Councilmember Donovan for clarification. This project would combine the regularly scheduled road slurry seal with the Active Transportation Plan (ATP) priority items, including the 10th Street bicycle lane which was where he had concerns. He pointed out that a full bike lane would impede the traffic on this busy street which includes commercial, multi-family and residential areas. He suggested that sharrows would be a better option than a Class 2 bike lane that would create a safety issue in the “door zone.” City Manager Blair King said that they have a backlog of projects from the previous year and they need to move forward. The motion was approved to allow staff to complete the maintenance program and come back with more details on the 10th Street project and notify residents of upcoming changes.

A variety of topics was covered during Oral Communication including a thank you to the City Council from Sharon Sherman, PAWS Board Chairman, for approving their budget and trusting them for the past five years. She highlighted that they have strong Board of Directors, including former Mayer Casey Tanaka and no animal has been euthanized during this time. Other topics included concern over the Port Master Plan, the safety issue of Navy flyovers to the Cays residents, and housing issues.

Dave Roland from Senator Toni Atkins’ office gave a brief update saying that the budget that passed last week was “responsible and bold.” Responsible because it has $19.5 billion in reserves, and bold because it addresses key issues like schools, healthcare, sewage, and homelessness, among other needs. He reported that $5 million is designated for an environmental impact study addressing suicide prevention on the Coronado bridge. He also said that undergarment donations are being accepted at the Coronado Library for Skivvies for Stand Down, which benefits military families. Due to the success of the previous Socks for Stand Down, this year’s campaign is collecting new underwear, bras, and undershirts for men, women, and children in need through June 24.

In the City Manager’s Report, King had City Attorney Johanna Canlas define the Tidelands Overlay Zone (TOZ) which was adopted by the council in the early 1980s and she pointed out that the Port Authority and Coastal Commission don’t recognize the rules in the TOZ, which they feel only applies to the City.

Mayor Bailey gave an update on SANDAG’s Regional Housing Needs Assessment (RHNA) and said that the proposed 1800 units for Coronado has been scaled back to 800, but he is still working on lowering that number. He pointed out that the current methodology of jobs and transit stops doesn’t accurately reflect the Navy presence in Coronado, and he will continue to lobby on this issue. He also mentioned that Coronado has been well represented at the SANDAG meetings.

After clarification that the proposed crosswalk at the corner of Fifth Street and D Avenue will be yellow, not white, because it is located in a school zone, the council unanimously approved marked crosswalks and pedestrian warning signs at the intersection on Fifth Street.

Tricia Olsen, Associate Planner, HRC staff liaison, Christian Rice, architect, and Alexandra, the homeowner, all spoke about the proposed changes to 848 Glorietta Blvd, which is a historically designated and Mills Act property. The scope of the project includes a new garage, second story and rear additions. The original design submitted for approval to the HRC was denied due to the contemporary part of the project. Rice came back with option A which received a split vote from the HRC. He brought another option B to the council meeting, which the HRC had not seen. Mayor Bailey and Councilmember Benzian were in favor of Option A, but Councilmember Sandke, Heinze and Donovan prevailed with their concerns regarding Floor Area Ratio (FAR), set back exemptions and maintaining the historical integrity of the property and voted to approve Option B, which they felt was more compatible.

Garry Bonelli, the Port Commissioner, was unable to attend the meeting, so he will present his report at the next meeting.