Thursday’s day full of sunshine, with no fear of rain in the forecast like so often lately, could not have been more perfect for the Coronado High School artists to showcase their skills at Chalk Walk.

The talent these students displayed was beyond phenomenal. Of the approximately 160-170 students who participated, all are in classes with either Laura Hill, the head of the visual arts department of the high school, who teaches beginning, advanced, portfolio and AP art, and/or with Karrie Jackson, head of the visual arts program with Coronado School of the Arts (CoSA).

According to Jackson, preparation for the event takes about a month. The students begin by choosing a group to work with, groups seem to range from two people to five or six. Then collectively they select their image. In speaking to some of the artists, their image selections were based upon liking a recording artist and their album cover to wanting a colorful, artistic challenge, like Paul Gauguin, with everything you can imagine in between. Several of the groups kept it local with iconic Coronado images.

After their images were selected, the students applied mathematic scaling to enlarge the size of the image for transfer to the sidewalk. (Yes, math in art for the win!) The sidewalks around campus were prepared a few days ahead of the event by the students with grids for the drawings. There was also a day spent practicing technique.

The chalk that is used is very similar to chalk used on a chalkboard except is has higher pigmentation and is denser, but not an oil pastel kind of chalk. This is why the weather played a big factor in the day’s success. Rain will wash these beautiful pieces away. I can’t imagine the thought of this beautiful work being temporary, but that’s exactly what it is.

The students began their work on Thursday morning at 7:30 and the school campus opened at 10:30 for public viewing. Several of the large pieces were surprisingly completed by 1:30 and many artists were still working furiously. The campus was open until 4:30 for the community to visit. While I was there, there were groups of students from Village Elementary and Sacred Heart on walking field trips for the event. They all seemed amazed at what they were seeing. 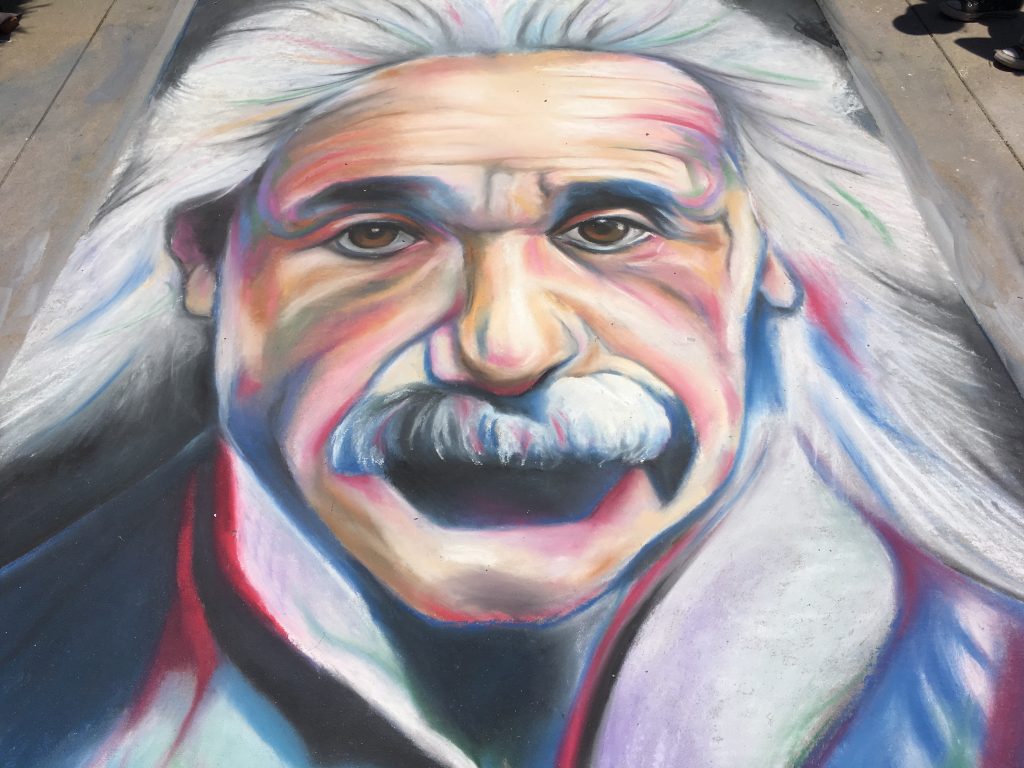 “Einstein” by seniors Ily Alfred, Paloma Goulding, Juleon Weimann (all who will be attending Mesa College in the fall), Alyssa Agarwal attending Yale and Summer Haddaway who will be attending UC Santa Barbara. They are all AP art students and their rendition of Einstein took about 6 hours from start to completion. 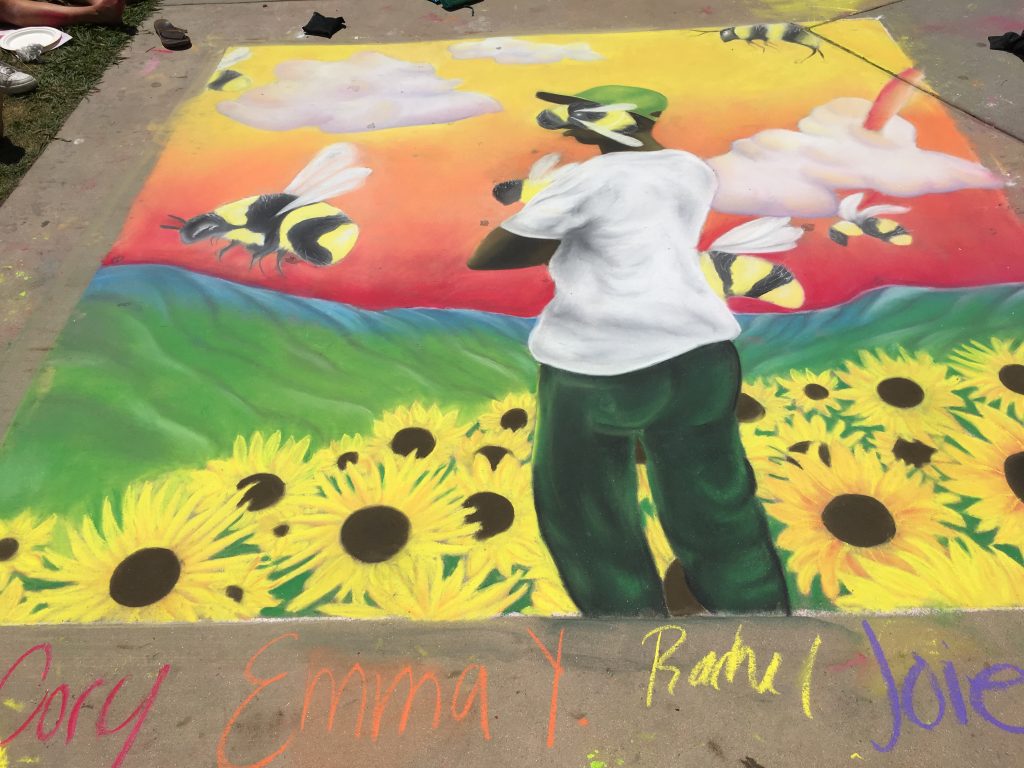 “Tyler, the Creator” album cover by Rachel, Emma, Amy, Joie, and Cory. Chosen because they like the music of this artist. 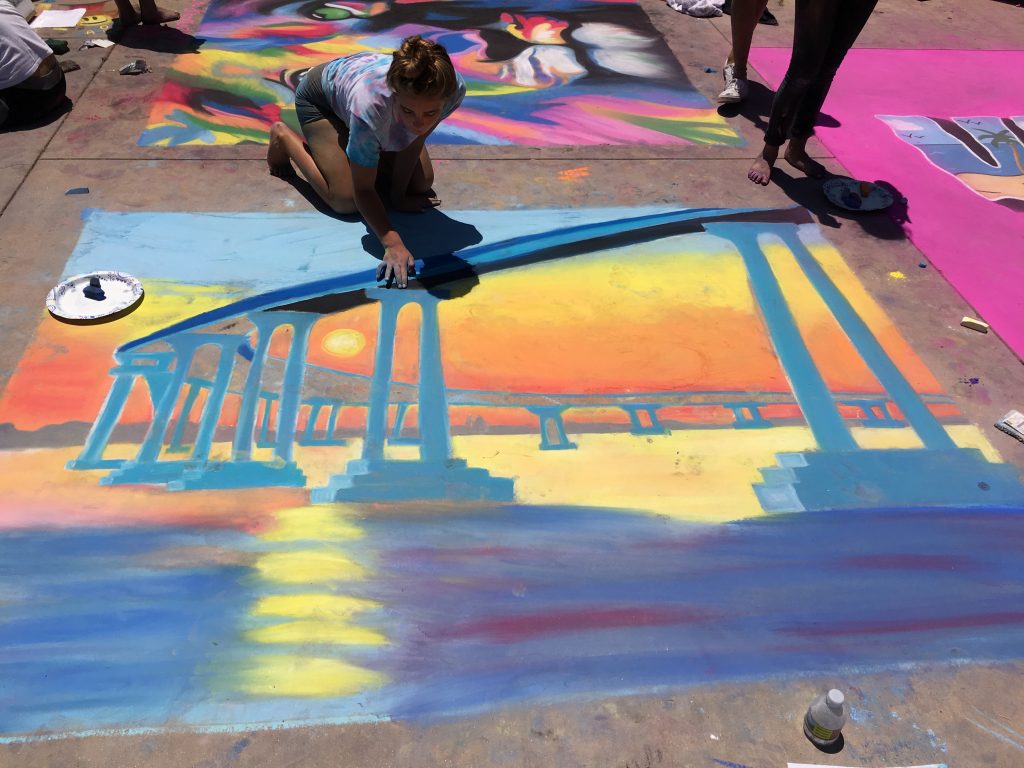 “Coronado Bridge” by Emma Colom Bildstein and Charley Shipton. Emma is an exchange student here from Germany and her partner Charley hails from Australia. Her father is an exchange student in San Diego. She and her family have been here for five months. It only makes sense as students in Coronado from different countries that their image selection would be the iconic bridge. 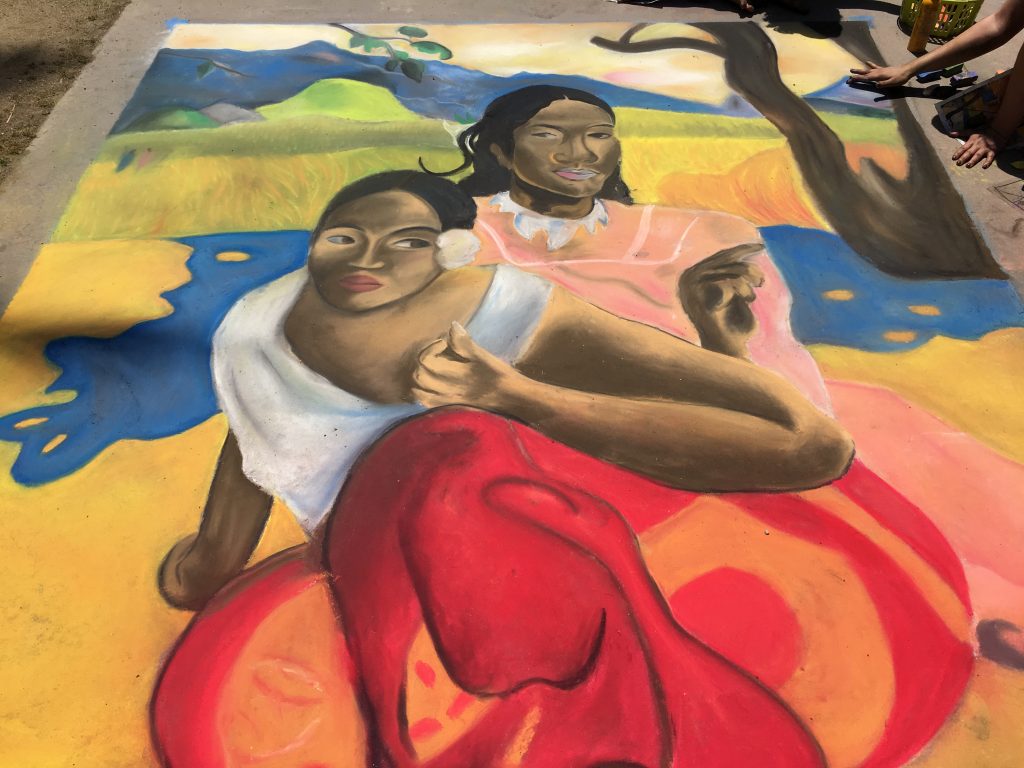 “Gauguin” was chosen by Lauren Griffin, Bryna Glass, Bella Anderson, Xavier, and Ava. They had originally selected an image that was even more iconic of the Gauguin style 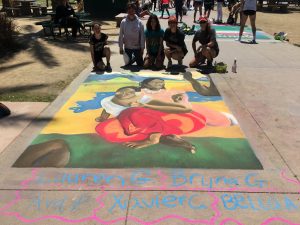 but came back to this one for its vibrant colors. Vice Principal Tom Hopper was circulating and wanted a picture with this crew as he spoke words of encouragement and amazement to all of the students. 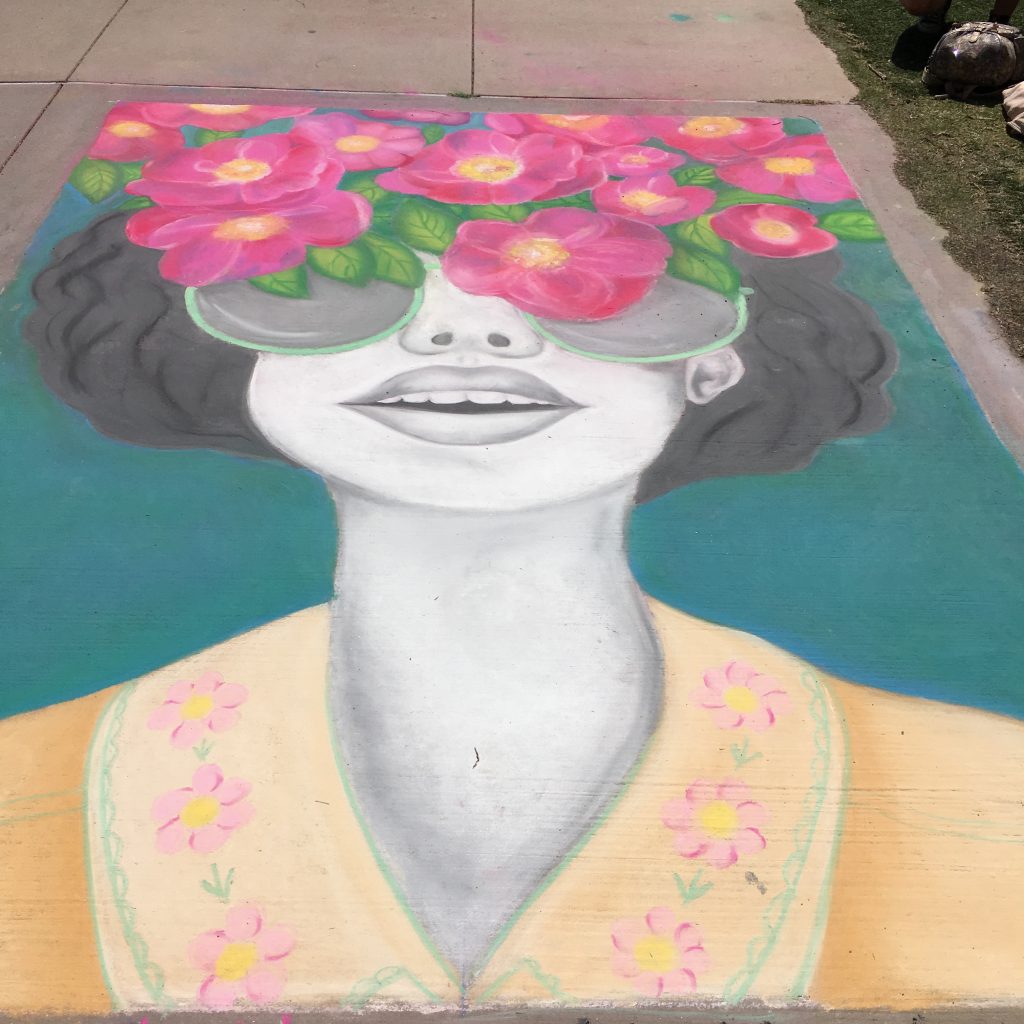 “Flower Girl.” Okay, so I gave her this name. The image was chosen from on an image online by the group of five: Jema, Zofia, Kelly, Vic, and Gabby. I was told they just liked the image and I agree. This was my daughter’s favorite. I did ask one of these artists if they are sad considering that their art is temporary and will be gone sooner rather than later, and she replied, “no, all art is temporary.” My gauge of all the artists was that this was part of the project and understanding. The conclusion of the project – it disappears. 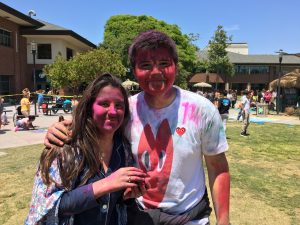 And then there were those who didn’t participate in the same way as others, like Alejandra and Bernardo who chose no image, but instead one another. Everyone was covered in chalk but these two made it their project.

Attending Chalk Walk was a treat and evidence of the talent both in students and instruction at Coronado High School. For your viewing pleasure enjoy more chalk art: