Disease-free by 2050. Sound impossible? Not for Coronado resident Chris Petersen, who was recently awarded the 2019 Cox Business Exemplary Award as part of San Diego’s 2019 “Top Tech Awards.” The award recognized Petersen and his company Scientist.com for exemplary contributions to the medical research field and business and technology communities.

Chris’ career began in computer programming in the late 1990s and shifted to the biotech industry during the aftermath of the dot com bubble in the early 2000s. Petersen’s expertise in programming and biotech, combined with his growing network of similarly-accredited peers in San Diego led him to his current role as co-founder and chief technology officer at Scientist.com, an online marketplace for outsourced scientific research. Petersen describes the business as “kind of like an Amazon.com for pharmaceutical research. We put tools and access to information into the hands, or ‘at the fingertips,’ of people and companies working in the medical and scientific research fields.”

Like any science experiment, Chris explains there was a lot of trial and error in the process of developing the Solana Beach-based business.

“Scientist.com was a sort of serendipitous New Year’s Resolution. My co-founders and I built the website, we built a lab, we offered a slick, online service that was unlike any other. We launched the business on January 1, 2007, and spent the next few years fine-tuning it. It took until 2015 for us to settle on our current model.”

The current model, with subsidiary offices in the UK, Boston, and Japan boasts more than 2000 service providers worldwide with suppliers and reps in 150 countries. Last year the company ranked #12 on Entrepreneur magazine’s E360 list of America’s Best Companies and was recently named One of America’s Best Workplaces in 2019 by Inc. magazine. Despite the exponential growth of the company and accompanying accolades, Petersen remains humble about his success:

“To be honest, I was really surprised and flattered when I found out about the Cox award. The award is determined by past winners and peers I respect and admire. I’m told it was more or less a unanimous decision, which is a really validating endorsement of our work.” 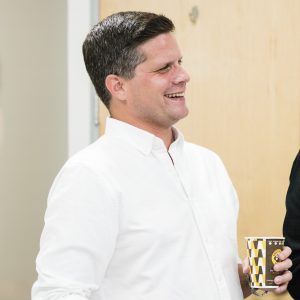 Originally from the East Coast, Chris and his wife Dana were purposeful about establishing permanent roots in Coronado during the most formative years of the Scientist.com business.

“California is home, and we love Coronado,” says Chris. “We moved to the Cays in 2013 just before our first child was born and were determined to make it work so we could raise our family here.”

Since 2013, the Petersen family has grown from two to four. With their eldest daughter now in kindergarten at Silver Strand Elementary and youngest at Crown Preschool, the Petersens spend their free time at soccer games, ballet, or Chabad House where they are active members.

As for what the next decade (or three) brings for Chris and Scientist.com:

“I would love to run and operate Scientist.com for as long as possible. I hope I’m around in 2050 to see the mission of being able to cure all human disease realized. But in the meantime, I’m grateful that I can ride my bike and take the ferry and train to work every day and be able to spend time with my family in Coronado. I wouldn’t have it any other way.”

CUSD is Hiring Lifeguards for BBMAC