Del Master Plan: Bringing Back the Past for The Del’s Future

As the $200 million expansion and restoration get into full swing, you can’t help but notice more fences being erected around The Del. As Robert Frost famously quoted, “Good fences make good neighbors.” In this case, the new fences on the corner of Orange Avenue and R. H. Dana Place are obscuring the major construction of the North Parking Structure from its neighbors until the final product is unveiled. “Creating this parking structure will give us the needed parking, as we move forward in other phases of construction. It will offer more than 700 new parking spaces with two underground parking levels and surface parking enhanced with landscaping,” says Kathy Breedlove, Master Plan Communication Director.  She estimates this project will be finished by the end of the year. Upon completion of this phase, a temporary new entrance for the hotel will be created off R.H. Dana Place. It will be built out to accommodate luggage and storage, and then visitors can cross through the atrium and enter the long-standing lobby to check in.

The current entrance will then be closed to start construction on the next phase of the hotel improvements. The revamped entrance on the south side will take two years to complete. Breedlove pointed out that “the first step for the new light at Avenida del Sol has been met with the recent approval by Caltrans for the need at that location. We are in the encroachment permit approval process now. The new signal is key to the new main entry and restoring the historic sense of arrival to The Del with a direct view of the turret.”

The next project encompasses a new Conference Center, with a 15,000 square foot ballroom, which can accommodate up to 1000 people. Currently, the Crown Room and Grande Hall can each host just over 700 people in a seated capacity. This phase will also feature a new 14,000 square foot outdoor space with 142 new guest rooms, which will be one-, two- and three-bedroom units and are approved to sell as Condo-Hotel, with owner occupancy restrictions, similar to Beach Village. The 97 California Cabana rooms are being updated, along with the Sun Deck Bar and Grill and main pool area.

May 2019 will see some fences coming down, with the completion of the new and improved Vista Walk, located near the shops at The Del ocean-side entrance. “We are elevating it to one level with a scenic ocean view which will offer an amazing outdoor space for events,” commented Breedlove.

“We are renovating one building at a time. We are currently working on the Oxford Building and will move to the smaller brick Laundry Building when it is fully renovated in May.” The transformation of the former 1500 Ocean restaurant will emerge with the opening of Serẽa. “The Del partnered with Clique Hospitality and San Diego-native Chef Jojo Ruiz to bring an elevated, yet approachable seafood-themed dining experience, in a contemporary setting, with an indoor/outdoor bar,” said Stacey Ellis, Director of Public Relations.

David Marshall, AIA, President and Senior Principal, Heritage Architecture & Planning, is working with OBR Architecture and has been tasked with the historic preservation and renovation. He recently gave a presentation at the Coronado Historical Association, where he detailed the architectural history of the hotel, 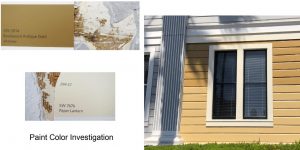 down to describing uncovering the Oxford Building’s original color scheme. “This is one of the most exciting projects I’ve ever worked on, but paint color investigation is not as glamorous as it sounds. We literally scrape away paint layers with a razor blade. We identified the original gold color as matching Rookwood Antique Gold from the Sherwin Williams Victorian Palette and we worked with the Design Review Committee to select a toned-down version.  A color match has also been identified for the off-white trim color,” commented Marshall.

Upon completion of the realigned driveway to the main entry, on the right side will be the restored industrial buildings, including the Oxford Building, that pre-dates the hotel and was moved on-site in 1983 from 1st Street and Orange Avenue, the Laundry Building, which was operational until 2018, and the Power Plant. The left side will feature the new Conference Center, which will have red trimmed window sashes to match the original hotel windows, which will also be restored to red as updates continue.

Bringing back the iconic porch many remember from the 1959 movie “Some Like it Hot” featuring Marilyn Monroe, is a key element to the restoration. “The porch floor will be hardwood boards that will give it an 1888 feel and acoustic sound. The new porte-cochère will be historically reminiscent for guest drop off with a restored cathedral ceiling and lighting,” says Marshall, who pointed out that originally there was one entrance for couples and men, and another for single ladies, with a veranda in between where men in bowler hats sat in rockers enjoying mint juleps.

Marshall highlighted that, “The new veranda and lobby will all be on the same level with a crisscrossing ADA ramp with three angles, allowing for landscape beautification. We will also be bringing back the balconies on the second floor to further restore the original look.  The balconies didn’t used to have doors, but had large windows that you opened up and walked out. The new veranda will be the original size, but 16 feet further forward to keep the current functionality. It will actually be bigger than the lobby.”

“The project design is about 30 percent complete, with porch construction starting within a year and then about a year time frame to complete,” said Marshall. He pointed out that original photos show a brick chimney on the front of the hotel that was removed when it was converted to steam heat, but brick detail will be added to the front facade to mimic that look. They are currently working on completing the Historic American Buildings Survey (HABS), which includes documentation, professional photos, drawings, and written history.

Marshall pointed out key elements from the Queen Anne Victorian asymmetrical design of the hotel and expressed delight at finding a craftsman surprise around every corner. “With a lot of repetitive details to recreate, we fortunately found original perforated molding and columns in the kitchen, so they can be perfectly replicated. There are also some original tongue and groove boards that can be repurposed. It’s like a treasure hunt to find the hidden details. We discovered additional original details when we removed some of the ceiling tiles in the gift shop. Most of the restoration is being done on the first and second floor.”

He went on to highlight that the original stained-glass window from the second floor was moved to the fourth floor and was reversed to be viewed from the exterior. When it’s restored to its original location, it will once again be seen from the lobby. Breedlove says, “We are doing everything we can to preserve and respect the revered history, while moving forward with future trends.”

It’s hard to believe the foresight that Elisha Babcock and Hampton Story had when they first envisioned the Hotel Del in 1885. “When it’s done, I want to be able to stand there and take a similar photo,” says Marshall, who has always had a love of historic buildings and has a collection of 60 plus postcards of the old Hotel Del Coronado, and 60 plus of Tent City. “There have been continuous changes to The Del throughout its 130-year history and we are now working to return it to its original glory,” he concludes.

Breedlove pointed out, “We went into the project knowing that parking would be a challenge. There was no way around this, especially during peak seasons like the holidays and summer. There has been lots of signage and resources to make it work as smoothly as possible. Overall it is working as planned with no major construction setbacks.”

The entire project, which will complete the 28-acre property, is expected to be finished by the end of 2021 or in early 2022 and will see many more fences put up and come down.  With all the attention to detail in this project, it will be fascinating to see the end result, when the final fences come down showcasing The Del’s past as it’s poised for the future.