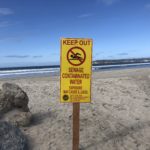 Coronado beaches have long been one of the top tourist attractions in the city of San Diego. Tourists and residents of all ages can enjoy the beautiful ocean for swimming, surfing and other nautical activities. Clean ocean water has always been, and hopefully always will be, an expected part of a trip to the beach in Coronado. However, with the unfortunate regular flowing contamination from the Tijuana River, the issue of safety has been raised by the community and a group of high school students is working to help.

Mrs. Tippets, a passionate surfer herself, participated in BWTF as a student at La Jolla High School. When she found out that CHS would start its own chapter, Mrs. Tippets jumped at the opportunity to teach students how to use science in order to protect the environment.

“It had made such a positive impact on me when I was in high school and made me so much more interested in understanding how we impact the environment,” says Mrs. Tippets.

The process of testing the water starts at the beach, where one to two students collect samples of the water in plastic bags. This sample is then brought to the lab room at CHS to ensure that sterile procedures are followed and the sample does not become contaminated. Once the plastic bags reach the lab room, the bags are ripped open to continue with dilution of the sample. A chemical reagent is added to the sample, which tests for enterococcus bacteria. This bacteria is often found in the ocean from fecal matter in stormwater runoff.

After the reagent is added to the diluted water, the sample is then separated in a quanti-tray sealer where it is incubated for twenty-four hours. The following day, the students can then determine whether it is safe to go in the water. By putting the sample under ultraviolet light, the enterococcus bacteria, if any is found, would be seen as fluorescent.

Once the students determine the level of contamination, they publicize their results to inform the community of water quality in certain areas. Click here for BWTF data in Coronado and San Diego.

“By doing the routine water testing, it gives everyone in Coronado and San Diego an idea of how clean the water is and if they should be entering the water,” says Mrs. Tippets.

Not only is this project beneficial to the environment, but it can also be a tool to show students how science is connected to their daily lives in Coronado. Students can understand why there are beach closure signs and how their oceans are being affected by pollution. This procedure, although complex, is fairly accessible to students, as they are doing real science that has practicality. Since many of them are surfers themselves, they have become extremely motivated to improve the contamination situation at their beaches.

Senior Sydney Zoehrer explains the impact it has on her life as a surfer: “As a surfer, I’m directly affected by contaminated water and often can’t surf for several days after a sewage spill. I was motivated to start the water testing in order to have full disclosure of the water quality issues that face our town.” Zoehrer’s role in the BWTF is to pass the samples through the quanti-tray sealers and testing for enterecoccus under UV light equipment.

“Eventually, I hope to step back and just be someone that they can contact if they have questions,” says Mrs. Tippets. “My goal is that this becomes a club on campus perhaps or that we always have a key group of students that are doing the water testing because ultimately, we should be doing this water testing every time of the year.”

The Surfrider Foundation grant will be enough for one year of testing, after which CHS will have to fundraise to continue the program. Since sterile procedures consume a fair amount of plastic, the BWTF at Coronado is also looking to purchase an autoclave—a lab device that ensures sterile procedures by using reusable glass instead of disposable plastic. Although CHS will continue to test during the school year, the BWTF hopes that the community can get involved to help test the water quality during the summer. For more information on how to get involved or how to donate, visit the Surfrider Foundation website.

Mary Jane Osmeña Perry, Commander, USN (Ret), passed away on April 6, 2021 at the age of 53.Born into a Navy family on September...
Read more
Business