At a press conference yesterday, arranged by Citizens Against Sewage at the Tijuana Estuary Visitor Center, former Border Patrol agent, Joshua Willey, shared his story, known risks and warnings about the waters off our local beaches.

In 2010, at age 33, a healthy and fit United States Border Patrol agent, who also served as a border patrol EMT, was one of 50 agents selected from thousands to participate in special advanced training for the U.S. Border Patrol Search, Trauma and Rescue Team. Joshua Willey was living his dream protecting the border just a few miles from where he grew up in the South Bay region of San Diego and next to the waves he had spent twenty years surfing in Imperial Beach. 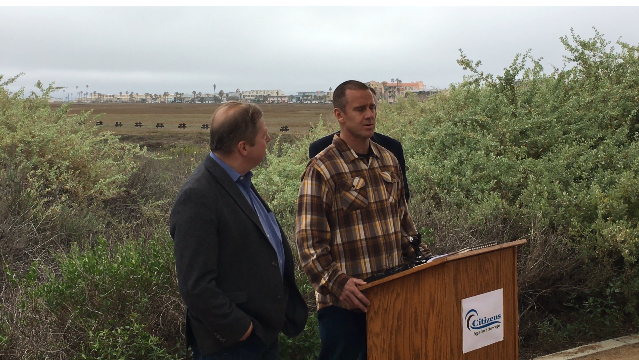 To say that this selection to train with the upper echelon of elite athletes was a privilege and honor was an understatement. The training began in April 2010. He and the others stayed in the barracks at the Naval Amphibious Base Coronado where they also trained on the same course the Navy Seals use. It was to be weeks of rigorous activity; Joshua was in tip-top shape as was necessary for selection. The training included low ground and belly crawls in the sand which left him with scrapes and breaks to his skin as well as Pacific Ocean swimming in the waters off the Silver Strand beach which have been contaminated with toxic waste for decades from Mexico. During the time they were training, there was rain.

On days 8 and 9 Joshua began to experience redness and pain in his left arm. He attributed it to muscle exertion and pushed through. The next couple of days the pain increased radiating down his arm, up into his neck and into his chest. By day 12 his arm became so inflamed, the skin was stretched tight like a balloon. So tight it was shiny and look like it was going to pop. But Joshua wanted this training so much, he persisted. The 12th night he woke with night sweats, excruciating pain, mental confusion, shaking and knew it was time to seek medical attention. The following day he was sent home because he could no longer perform. He expected to rest it off but instead ended up having a febrile seizure due to high fever. He was transported by ambulance to Grossmont Hospital where he was later diagnosed with group A Strep – Necrotizing Fasciitis, commonly known as flesh-eating bacterial infection. The doctors discussed the possibility of the need to amputate his arm. Joshua was hospitalized for a couple of weeks; treatment was effective and his arm was saved. Upon his release, he spent several months recovering and receiving physical therapy. His left arm has two scars about three inches long each where the infection had to be drained to rid it from his body and reduce the pressure on his skin.

Willey was eventually cleared to return to work but was never the same. The waters he grew up surfing and loving in spite of the staph infections, sinus infections, stomach issues, skin rashes and other ailments he and his surf buddies got from the water, had now extinguished his lifelong dreams. His career came to a medically induced retirement in 2013, in part, due to the infection. Now 41 years old, Joshua receives Federal Disability 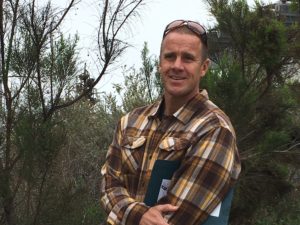 and is doing his best to move on with his life as a husband and new father while he battles depression. He said the reason he decided to come forward and share his story as the first former Border Patrol agent to be gravely impacted by the contaminated waters the agents trudge through daily is that “in his heart, it’s the right thing to do.” He hopes that sharing his traumatic experience will be a reason for President Trump to agree to walk along the Tijuana River and understand the need for appropriate action to mitigate this continuous life endangering problem during his visit to the border next week. He hopes that Trump will take the necessary steps on a federal level to protect residents, visitors, our military, and those whose work puts them in the locals waters here in the southernmost waters of California.