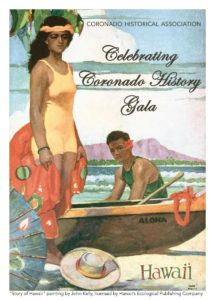 The Coronado Historical Association & Museum is excited to announce the annual Celebrating Coronado History Gala on Saturday, February 24, 2018, 5:00pm-10pm, and for the first time ever, the gala will be held at the historic Hotel Del Coronado. The Museum will honor John D. Spreckels–a pioneer in Coronado’s early history. The Hawaiian-themed gala emphasizes Spreckels’ legacy as a forefather of the Coronado community who brought the Hawaiian Islands to San Diego’s own “Island.”

Before coming to Coronado, Spreckels built his shipping empire out of his family’s success in the sugar industry in Hawaii. The family’s ties in the tropical island extended to the Hawaiian Royal Family, who even visited Spreckels and his wife at the Hotel Del Coronado.

This year the guests will enjoy a cocktail reception, silent and live auction with many one of a kind items, a Hawaiian-inspired gourmet dinner, live Hawaiian entertainment and the GEM award presentation. Celebrating its fifth year, the Coronado Historical Association’s GEM Award honors thoughtful efforts of homeowners to preserve and restore, rather than replace, existing homes. The award celebrates our community members who turn potential teardowns into architectural GEMs. These owners truly Go the Extra Mile (GEM).

The Coronado Historical Association’s GEM Committee is pleased to announce this year’s finalists: Edry Goot’s 1433 7th Street home, Mike and Lauren Holman’s 917 A Avenue home, and Peter and Karen Laedlein’s 944 I Avenue home. The award is sponsored by Coronado Bank and Commerce, and the winner will be announced at the gala.

The proceeds from “Raise the Paddle” auction will benefit the Museum’s educational and outreach programs which include the Third Grade Program, STEAM workshops, Summer Camps, Junior Historian Program and community events.

Tickets for the event can be purchased online at www.coronadohistory.org/gala2018, in person at the Museum, 1100 Orange Avenue, Coronado (winter hours 10am-4pm, Monday-Sunday) and by calling the Museum at (619) 435-7242.

The Coronado Historical Association Museum was established in 1969 by a group of concerned citizens with an eye toward saving the intriguing history of a unique community. Their first goal was an inspired one–to raised funds to save a Coronado ferry that had been retired with the opening of the Coronado Bridge. When that goal proved to be beyond reach, the Museum took on an activist posture, vigorously seeking artifacts, records, photos, and remembrances of Coronado’s past. Since then, the Museum has grown in membership, collections, and education programs that impact the community of Coronado and greater San Diego.

The Coronado Historical Association Museum’s mission is to encourage and promote the appreciation, preservation, and understanding of Coronado’s unique history, culture and historical resources to enhance the essence of our unique village community. The Museum emphasizes the importance of keeping the history of Coronado alive for generations to come.