An Off-Season Trip to Sequoia and Kings Canyon National Parks

We breezed into Sequoia National Park around 4:30 pm on a Saturday in late November. The sun was setting, making the winding road drive slightly uncomfortable given the likelihood of wildlife in the waning light. And yet, it was just that timing that made the beginning of our visit to Sequoia memorable in the first fifteen minutes.

First, within minutes of passing the National Park Service gate, it felt as though we had entered the land of giants. The mighty trees, some of which are over 300 feet tall and 2,000 years old, began to appear almost immediately. If that weren’t enough, just around a turn in the road, a black bear trundled across the road in front of us and then stopped on the other side to take a good, long look at us. “Bear,” we cried, so that everyone in the car would look up from whatever they were doing. The bear looked as curious as we were to see what all the commotion was about. He stopped and looked at us, long enough for us to think that maybe we should turn on the hazard lights for anyone coming up too fast behind us.

As we continued down the road, the amazing soft play of pink and blue of the early sunset began to scatter across the sky, reflecting off of the mountains opposite. The light was something I had read about. It was nonetheless stunning. And, I say that as someone who has seen some pretty fabulous sunsets recently in Coronado.

As the sky darkened, we reached our destination, Wuksachi Lodge. The lodge itself holds just the registration desk, restaurant and bar, and a small gift shop. The sleeping accommodations are in a series of buildings across the street and a bit down the road.

When we entered, we found the lodge bustling with people checking in, coming in for drinks or an early dinner and setting up games and reading by the wood-burning stove. Just the right scene for a fall dinner. 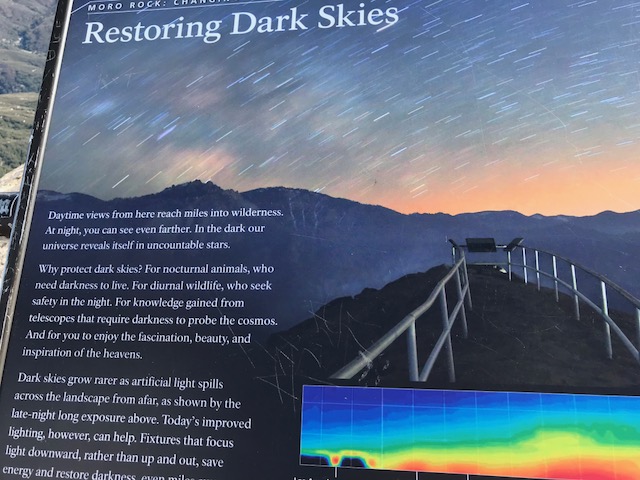 By the time we left the lodge, we were already able to see our third beautiful natural phenomenon – stars. An entire sky full of stars – more than I could remember seeing almost ever – sparkling, almost dancing in the night sky.

We stayed three nights, which was long enough to do a few hikes, but not nearly long enough to see all there is to see in Sequoia and Kings Canyon National Parks. As those of you who have visited National Parks will know, the Parks Service publishes a complimentary newspaper and guide to the various parks. This guide listed 12 separate trails – although they often criss-cross and converge – of varying levels of difficulty. We chose to see two of the biggest trees – General Grant Tree, which is practically spitting distance from a parking area, and General Sherman Tree, which required quite a bit more walking (the trail is 2 miles round trip), but was also easy to reach. The third trail we followed was more difficult, but certainly worth the effort. It required a 400 step climb up Moro Rock (a granite dome) that afforded views of the Great Western Divide from the top.

With two boys, ages 10 and 14, the trip was amazing. We saw a lot of wildlife, including bear, deer, and a wolf (or large coyote), and many hawks. There was plenty of physical activity, climbing and running, even outside the trail system. And, the lodging was adequate if not luxurious (although the lodge is dubbed the most luxurious in the park). Food could have been a problem as the only place to eat at this time of year near the Wuksachi Lodge is the Wuksachi Lodge. Luckily, we brought a cooler and had a store of food for the day. But, the Lodge also offers box lunches to go for a modest price.

The Giant Sequoia National Monument is part of Sequoia National Forest and was established in 2000 for the purpose of protecting the existing groves of Giant Sequoia trees, which only exist on the western slope of the Sierra Nevadas. The Monument encompasses over 300,000 acres and 30 groves of Giant Sequoias – the largest (although not necessarily the tallest) trees on earth. Because it is a designated National Monument, it is protected from logging or other activities. For now. It was on a list of National Monuments that Interior Secretary Ryan Zinke considered shrinking or abolishing. While it did not make the final list of those Zinke recommended changing, the proposals are still under consideration by the administration.

We drove from Coronado. The route we took went through McFarland, in the central valley, on highway 99 – a nice little detour for those who have seen the movie of the same name. The trip would have been a lot faster going both directions if Los Angeles wasn’t between here and there. Plan for about 8 hours, at least, without stops. 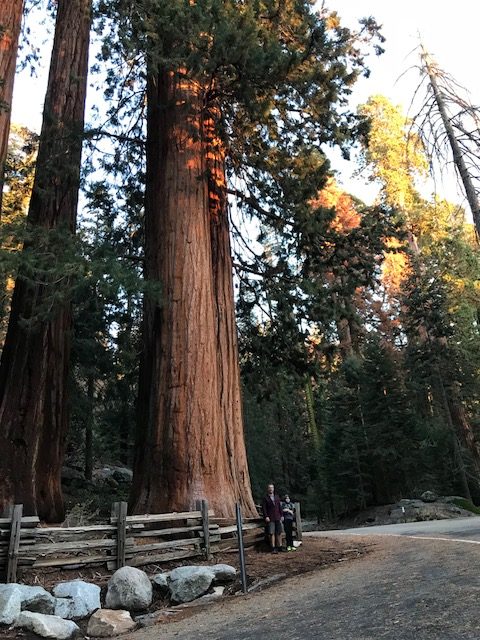 Vandemic Adventure: A Trip up to Tahoe

For my first longer trip I chose to travel up to Lake Tahoe with my dog Bhumi, a one and a half year old...
Read more
Business