The biggest rumor that everyone has been talking about is confirmed: Buona Forchetta is coming to Coronado! The restaurant will open in the location of the current El Cordova Garage.

Matteo Cattaneo and his wife, Alexa Kollmeier, who own Buona Forchetta, invited The Coronado Times to visit with them at their home in Coronado to discuss the much-anticipated restaurant.

Those of you who are foodies know that Buona Forchetta has had a meteoric rise in the San Diego food world. Buona Forchetta opened in South Park in 2013 and almost immediately began to top San Diego “best of” lists, including making San Diego Magazine’s Critics’ Choice for Best Pizza in 2014 and Zagat’s list of San Diego’s best pizza places in 2016. Just recently, it made three categories in San Diego CityBeat’s Readers Poll of Best Food – it was named San Diego’s Best Restaurant, Best Italian Restaurant, and received Honorable Mention for Best Restaurant Staff.

From Italy to South Park

Matteo Cattaneo was born and raised in Italy. From the time he was young, he was headed toward a professional, white collar career. After finishing his degree in law, he came to San Diego to pursue a specialization in business law. Surprisingly, he quit the program after several months to pursue what had become a passion – the food business.

Matteo said that food was always important to him. He grew up in a household where there was always cooking going on. “We didn’t really have the money to go out and, in Italy, everybody cooks at home. So, my grandma and my great grandma. Everybody was just cooking and cooking and cooking all day long.” Matteo said that his mother passed her passion for cooking to him. She was an accountant, but always loved baking. “Her friends would say to her, you should really open a restaurant.”

Matteo, however, had not intended to follow a path to the restaurant industry. But, while working in a friend’s restaurant in San Diego to make extra money while studying, he found that he really loved it: “In Italy,” he said, “a restaurant is more like a place you just go to eat. But, here, your waiter is a big part of your experience in the restaurant. And, I really enjoyed that.”

Over time, Matteo said that customers would come in and ask for him, and his friend started giving him more and more shifts. Matteo loved the interaction with customers and getting to know more people. Pretty soon, he was working almost every day. At some point, he and Alexa started thinking that if he was going to work so much, maybe it should be for himself. So they started thinking about opening a restaurant.

By 2008, Matteo and Alexa had moved to South Park; but one thing that they found missing in their neighborhood at that time was a nice, neighborhood hangout. Alexa said, “At that point, South Park was not the vibrant neighborhood that it is now. … we lived there and we knew that it was an awesome neighborhood with great people and it needed something like this. You know a neighborhood gathering spot.” Matteo added, “A place that you go with your friends, big tables, lot of fun, noisy. That’s the experience we wanted to try to replicate.” And, the kind of food that Matteo found lacking in San Diego was authentic, Neapolitan Pizza.

So, they had their idea, but they needed a space. As they walked around the neighborhood and thought about the business that they wanted to create, they noticed a building that had been empty for a couple of years. That building eventually became the location of the first Buona Forchetta.

It ended up taking more than a year to negotiate the lease. While the negotiations stalled, Matteo and Alexa considered other spots. But, they were really attached to the one they had found. It was a historic building, with a great deal of character – like the house they by then owned in South Park – and they wanted to restore it and breathe new life into it. It would have been hard to walk away, Matteo said, “It was like falling in love with that place.”

They opened Buona Forchetta in 2013 and the rest is a bit of history – an Encinitas location has been in the works for a couple of years, and will likely open later this year, and the Liberty Station Officine Buona Forchetta opened in March. And now, Coronado.

The Move to Coronado

Matteo and Alexa moved to Coronado with their two daughters, Sofia and Isabella, and two dogs, Dante and Beatrice, in the summer of 2016. They chose Coronado for many of the same reasons others do – it was such an idyllic location to live and to raise a family.

That was the plan – live in Coronado and open the Liberty Station and Encinitas locations. Then one day a broker approached Matteo and asked if they might like to open a place in Coronado. Matteo said it was a dream, but he and Alexa had not expected it would happen.

When they were shown the space of the El Cordova Garage, they couldn’t believe how perfect it was – beautiful, historic, with real ambience: “It’s such a unique building,” Matteo said as he began to recount how they expected to use it.

First, they were adamant that it would not be torn down as many on social media have feared. “We care about preservation,” Alexa said, “It’s important to us.” That’s part of the reason they liked the building in South Park, part of the reason they chose a historic home in Coronado, and a huge part of why they were attracted to the El Cordova Garage. Matteo added, “We want people to know that we want to keep as much as possible from the garage. Designate it [historic] if we can. Try to influence [Bruce] Kleege [the property owner] to do that. In the end, it is his decision. But, we are trying to work on it because we know that the community wants to keep it that way.” 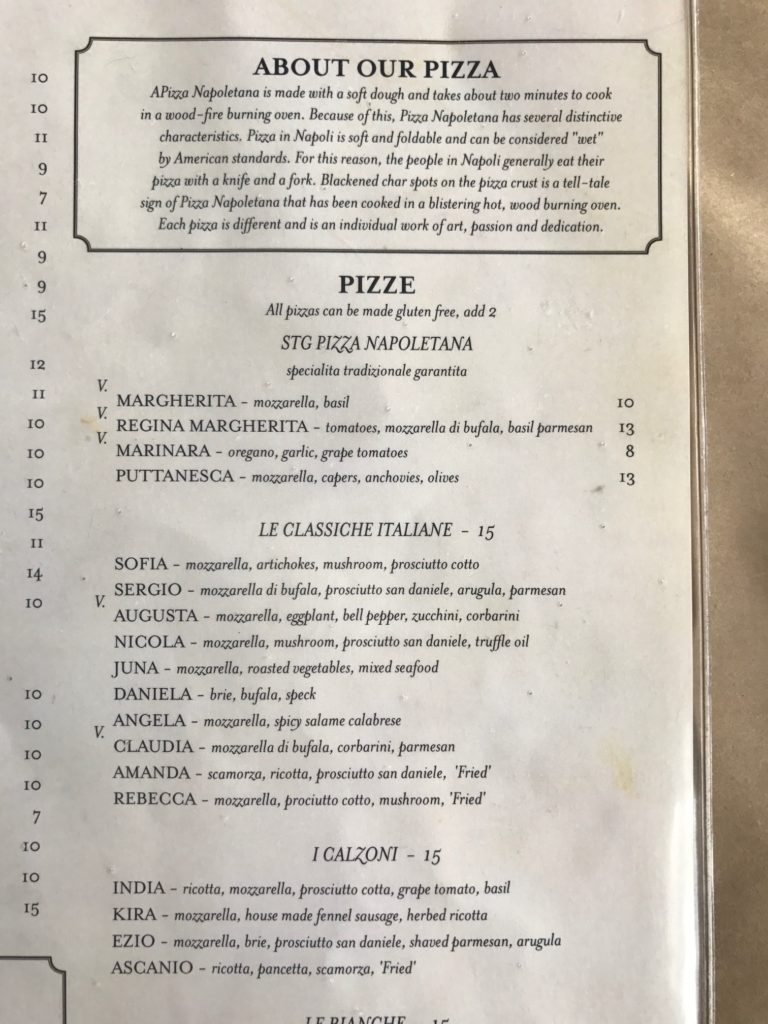 Second, the restaurant will focus on locals, not tourists. There are a lot of young families in Coronado and Matteo and Alexa want to focus on them, with a kids’ area. Alexa said, “We want a place where you can go any night of the week. Where you’re not going to spend a fortune, you get good quality food, a nice atmosphere, and you can bring your kids.”

With regard to the menu, Matteo said that he expects the restaurant menu to remain very similar to the one in South Park (including the prices!). But, he wants to add some other items as well: Pizza Romana (which is a pan-type of pizza) and Teglia Pizza (which you cut with scissors and sell by the pound). He said he is also exploring Bottega ideas – food that you can pick up and take home: a slice of pizza, fresh pasta, and bread!

One notable part of the current menu is the dessert section. Matteo’s mother, who had always loved baking, has been making all of the desserts for the restaurants. Nonna, as she has come to be known, has added some helpers, so hopefully, she will be supplying all of the desserts to the Coronado location as well. Matteo said, of his mother: “She’s like a machine. You cannot stop her. You won’t find another person with the same energy. You’ve got to give her something to do.” Over time, she has become something of a personality in the restaurants: “At the beginning, people would ask where we got our desserts. And, we’d say, ‘Nonna made it.’ People didn’t believe it. So they started making her come out. Now everyone knows her. Everywhere we go, all the restaurants, they know her.”

Alexa and Matteo expect that it will be a while before the restaurant opens – Matteo says he is hoping for 2019. In the meanwhile, they know there have been a lot of negative emotions over the closing of the El Cordova Garage and the entry of a restaurant. They want people to know that they did not push for the space. It was presented to them as a place that was going to be vacant. Matteo said, “When we read your article about [Rock Walton] getting his notice, we were the first ones to be surprised. We didn’t know.”

Alexa and Matteo have mixed feelings about the opening. On the one hand, it is a dream come true for them – they love the building and they are excited about opening a place here where they live. But, they are sorry that they are displacing a business. In the end, Matteo said, “We know there are people who cannot wait for us, there are others who will not like us. But we would like at least a chance. I think everyone deserves that.”

Looking down the road, Matteo said that he does not expect to open another restaurant after the Coronado one: “This is our last one. It has to stop … It has really been a crazy ride. We started with nothing and all this came. Believe me, it’s a lot of work … But, I think we got all the right places. We really like small communities and [here] you sense the community. We trust the community. We try to give back as much as we get.”

One lingering decision still not made for the Coronado location is what they will name the oven. Buona Forchetta in South Park is well-known for its dramatic and beautiful stone oven. The oven was made by an Italian artisan, Stefano Ferrara. When Ferrara was building the first one, he told Matteo that it had to have a name. So, he and Alexa named it Sofia, for their first child. Their second child, Isabella, is sharing her name with the oven in Encinitas. When contemplating the name that he would give to the Coronado one, Matteo offered, “Oh, I think it will have to be Alexa.” Alexa said, “No.” “No?” Matteo asked. “No,” she said. So, on that, we will have to wait and see.