On Tuesday, July 4, 2017, the skies around San Diego Bay will light up with a thrilling pyrotechnics display in the 17th annual Port of San Diego Big Bay Boom. 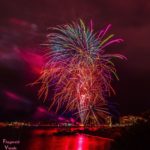 The approximately 20-minute show will be choreographed to music broadcast live on MAX FM 105.7 radio and The Mighty 1090 AM. A live telecast of the show can be viewed on both FOX 5 (San Diego & Baja, Mexico) and KTLA (Los Angeles and Southern California region).

Boaters in the Glorietta Bay area of Coronado will not require a permit between 12 p.m. on Friday, June 30, 2017 and 12 p.m. on Wednesday, July 5, 2017. City of Coronado Lifeguards will direct boaters to the special anchoring area. Vessels will not be permitted to enter the special anchorage area prior to 12 p.m. on June 30. The A-5 Anchorage in Glorietta Bay will be closed due to its close proximity of the fireworks barge.

All boaters interested in viewing the event on the water are asked to be extra cautious and pay special attention to the Coast Guard Auxiliary patrol boats with flashing yellow lights. They will be ensuring boaters do not get within the 300-yard perimeter safety zones around the four fireworks barges. All boaters are also encouraged to review the ABCs of California Boating. A new law requires children under the age of 13 to wear a lifejacket on a vessel of any length.

The All Schools Movie and Back to School Bash is Something to Phone Home About!

You’re invited to get cozy, snuggle in with your family, and savor an iconic (and nostalgic) movie under the stars! The “All Schools Movie...
Read more
Entertainment

The Coronado Cultural Arts Commission and the City of Coronado look forward to celebrating Arts Education Week from September 13-19, 2020. As part of...
Read more

On Friday, August 7, a special ceremony was held at Sharp Coronado Hospital to mark the 50th anniversary of the dedication of the four-story hospital tower,...
Read more
Advertisement
Advertise Here (Get Rates)