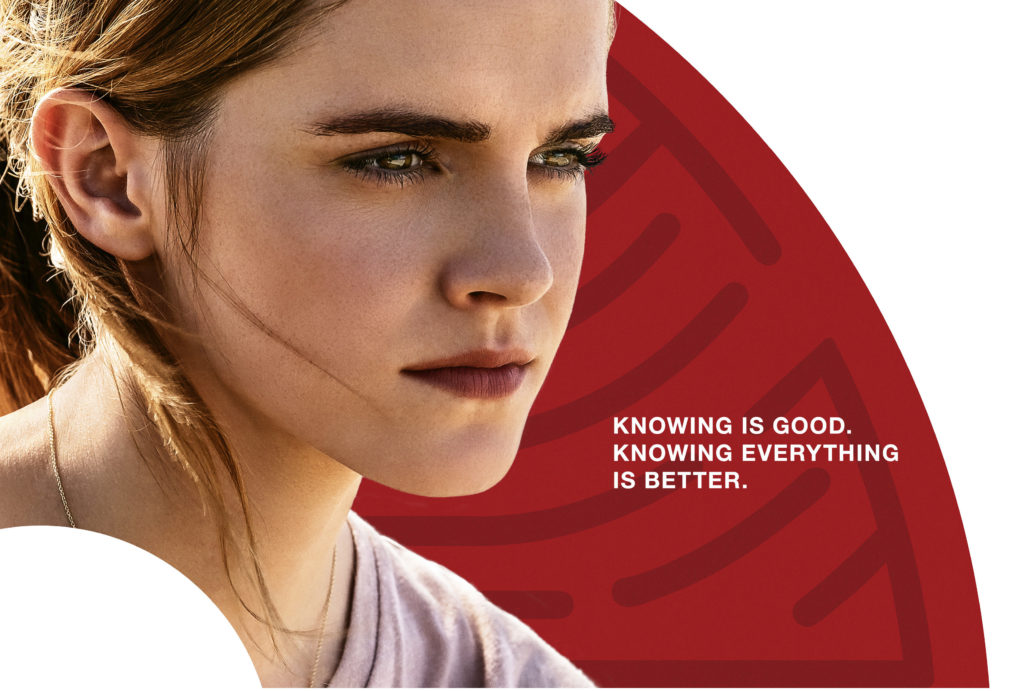 It is the not-so-distant future, and young Mae Holland is bored out of her mind. She’s working for a telephone company in her hometown, all her colleagues are twice her age. She wants out.

And then she lands her dream job. Mae’s glamorous, larger-than-life college roommate, Annie, tells Mae she secured her an interview at The Circle, the most innovative, fastest-growing company in the world. Mae gets the job, and her career begins a dazzling trajectory.

Life at The Circle is utopian, with diverse young people working in glass-enclosed open office spaces, chatting on green lawns around sleek tablets, or playing squash in the campus’s state-of-the-art gymnasium. Mae is in heaven. Within a couple of weeks, she is getting the hang of the new social order, too, where participation in campus events and social activities isn’t mandatory, per se, but very much expected. She learns the ropes and soon becomes a favorite at The Circle.

She watches in awe as The Circle rolls out new technologies, including incredible little cameras the size of large marbles that are easy to hide around the world. Through the tiny cameras, “Circlers” hope, the world can fully share and participate in life together — and perhaps also prevent or dissuade crime before it even occurs.

One night, though, feeling distraught about her father’s worsening medical condition, Mae steals a kayak from her regular rental spot and goes out onto the bay alone. When a tiny Circle camera catches Mae’s crime, she finds herself answering to the masterminds behind The Circle, including Eamon Bailey (Tom Hanks). Through this connection, though, Mae steps into the inner circle of The Circle itself.

The movie is based on a book of the same name by Dave Eggers, popular indie author of A Heartbreaking Work of Staggering Genius and philanthropist in the Bay Area. The book The Circle is an international bestseller; I picked it up in an airport in Stockholm. The premise, as described above, is fascinating, and the characters are easy to love. I tore through the book, and found myself conflicted but also nodding my head at the ending.

The movie, however, left me with a different taste in my mouth. My issue is not so much with the plot itself — although the author and the director did work together to make some significant changes to the screenplay — but is instead with the delivery of the movie. My husband, who saw The Circle with me, said, “I have to admit I was cringing at times. Emma Watson and Tom Hanks were good, but otherwise a lot of the acting was awkward and flat. The plot seemed forced, like they were trying too hard to get us to care about the characters or the story.”

Unfortunately, I have to agree. The secondary actors were all especially stiff, particularly the character of The Circle’s founder, Ty (John Bodega), who was as warm and interesting as a piece of cardboard. This was particularly disappointing because the character’s actions in the book are some of the most electric parts of the story. Also, crucial scenes later in the movie were rushed or altered in such a way that they didn’t connect with the audience, or felt forced, leaving all the events afterwards — even the ending — confusing and ambivalent.

So ultimately this film isn’t my favorite, despite Emma Watson’s excellent efforts and Tom Hanks’ familiar brilliance. However, even though the acting and direction leave something to be desired, The Circle does ask some very thought-provoking questions about our lives online, the future of privacy, and where we may be headed in a world where companies like Google and Facebook are increasingly compiling our information into an online identity that is public for all to see.

Is it true that “knowing is good, but knowing everything is better,” as The Circle claims? The answer isn’t black and white. See the movie (or read the book) to decide for yourself!