Coronado holds a ribbon cutting and reception for the community for their newest facility, the John D. Spreckels Center and Bowling Green, and also unveils the Transition sculpture by Jon Koehler. 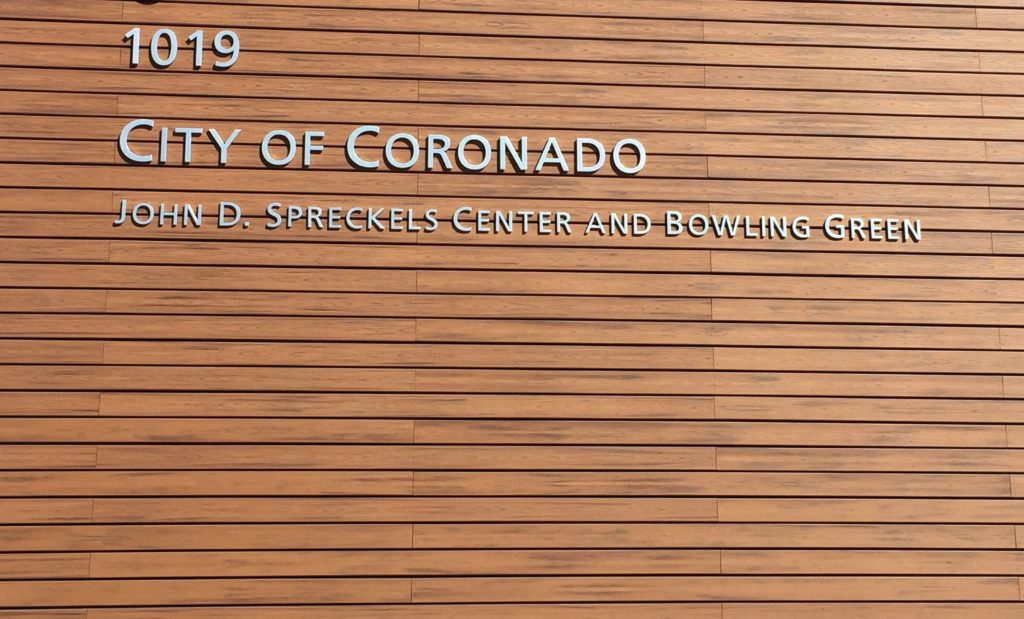 Last Thursday some 500 people came out for a preview of the new John D. Spreckels Center and Bowling Green and the unveiling of “Transition,” an outdoor sculpture the city commissioned for the new facility.

Construction won’t be complete until mid-January 2017. The facility will not actually open for business until February. City planners had assumed that it would be ready by December 8.  When they realized construction had fallen behind schedule, the city executed “an aggressive completion date to push the project along,” City Manager Blair King said.

They kept to the original December 8 opening though because of scheduling conflicts in early January. “[We] also didn’t want to deprive this council of the opportunity to cut the ribbon,” King said. Two of the council’s members, Mayor Casey Tanaka and Councilman Mike Woiwode, officiated at their last council meeting on December 8. They, along with council members Carrie Downey, Bill Sandke and Mayor-elect Richard Bailey, guided the design and financing of this project.

The outgoing council was joined by host of local movers and shakers. Along with local dignitaries, as well as Port Commissioner Gerry Bonelli and Naval Base Coronado’s Executive Officer Captain Timothy J. Slentz, were two women who played a key role in this project. Linda Rahn, the former Recreation Department Director, helped launch the project more than five years ago, guiding it though its early stages. She conducted surveys, organized workshops and navigated the needs of lawn bowlers and seniors. Francette Roeder lobbied tirelessly for the new center. Nary a council meeting went by without Roeder stepping forward to remind the council of the need for a new building for seniors to gather. Along the way she enlisted hundreds of other seniors to join the cause.

Unlike the Spreckels Center itself, “Transition” was ready for prime time. The towering stainless-steel kinetic sculpture by Jon Koehler stands in front of the center.

In his work Koehler strives to “bring opposing forces into equilibrium, turning cold hard steel into a graceful kinetic balance within its environment.” Indeed a brisk December wind propelled the sail-inspired blades as soon as Mayor-elect Bailey pulled off the canvas covering.

This is the second work the Point Loma-based artist has created for Coronado. Another sits at the promenade on Glorietta Bay by the Coronado Yacht Club.

The $5 million Spreckels Center was designed by Orange County architect Robert Coffee and landscaped by Patrick O’Connor with native, drought-tolerant plants. Money for the project came from unrestricted funds bequeathed to the city by Frances Goodrich Harpst in 2010.

The 9,000 plus square foot building features an open floor plan and large windows, a large multipurpose room to accommodate popular programs such as Armchair Travel, and smaller spaces for special interests, such as bridge or book clubs. There is also a modern kitchen, and dedicated outdoor living and patio areas. All are features that seniors and lawn bowlers requested. At the city council’s insistence the building is LEED-certified. This is Coronado’s third green building; the Animal Care Facility and the Boat House/Club Room are also LEED-certified.

Beginning in February 2017, the center will offer myriad programs and services, including fitness, education and arts and crafts.  The building will also function as a club house for lawn bowlers, whose green sits just behind the new building. Other volunteer organizations will also be able use the center for meetings and other activities at no cost.

This new community facility was named for the San Francisco businessman who put Coronado on the map. John D. Spreckels owned the Hotel Del and Tent City. He gifted the land for Spreckels Park and the public library. His great-granddaughter, Chris Bleacher Donald, attended the ceremony.