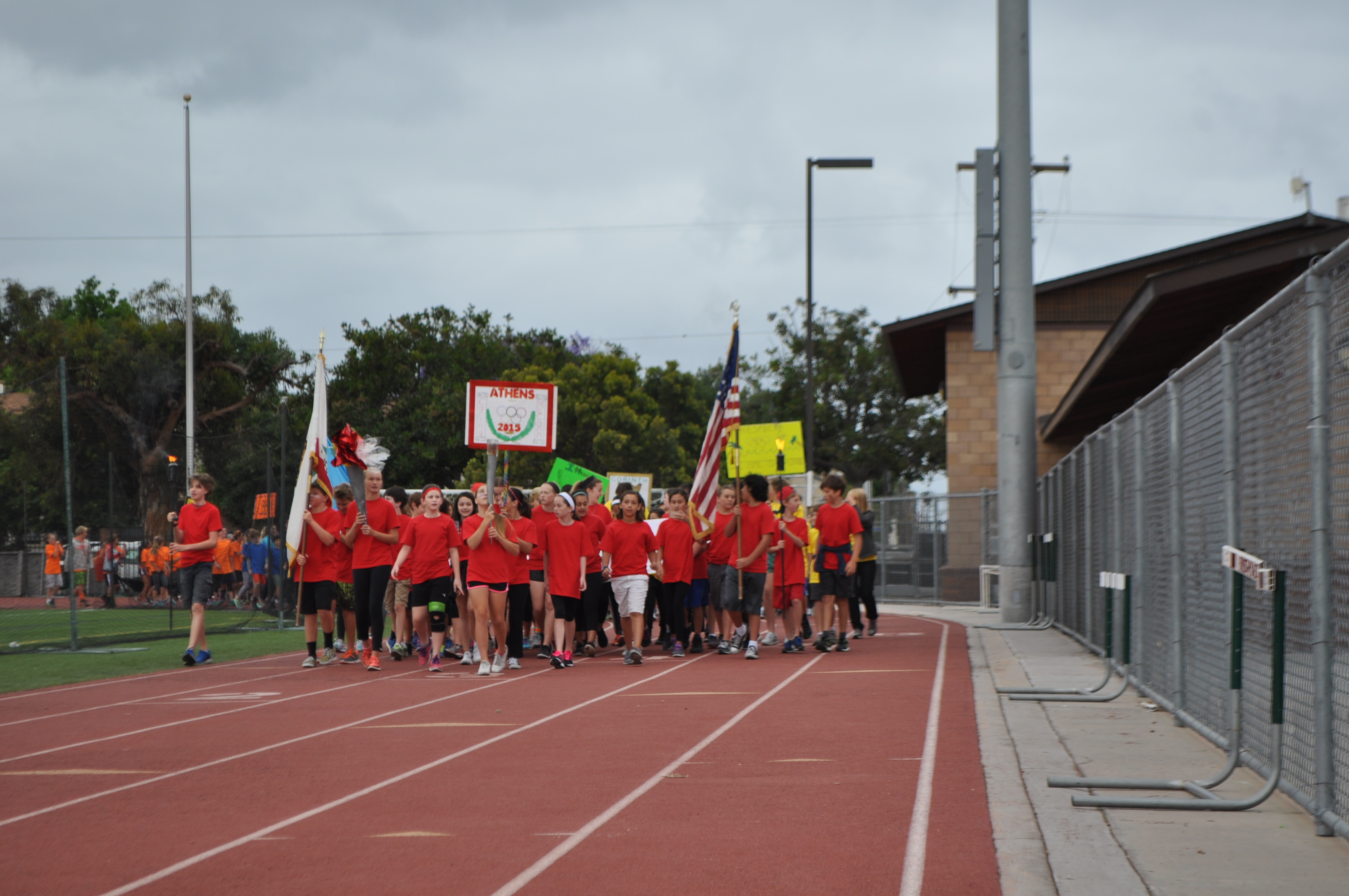 The event started with a parade of athletes, complete with an Olympic torch.

Thursday, May 7, 2015, was the 22nd Annual Sixth Grade Olympics for Coronado Middle School (CMS). This yearly event is an opportunity for the students in each homeroom to work together on the athletic field and in the pool while displaying the ideals of the Olympic tradition, including participation for “the glory of sport and the honor of [our] teams.” 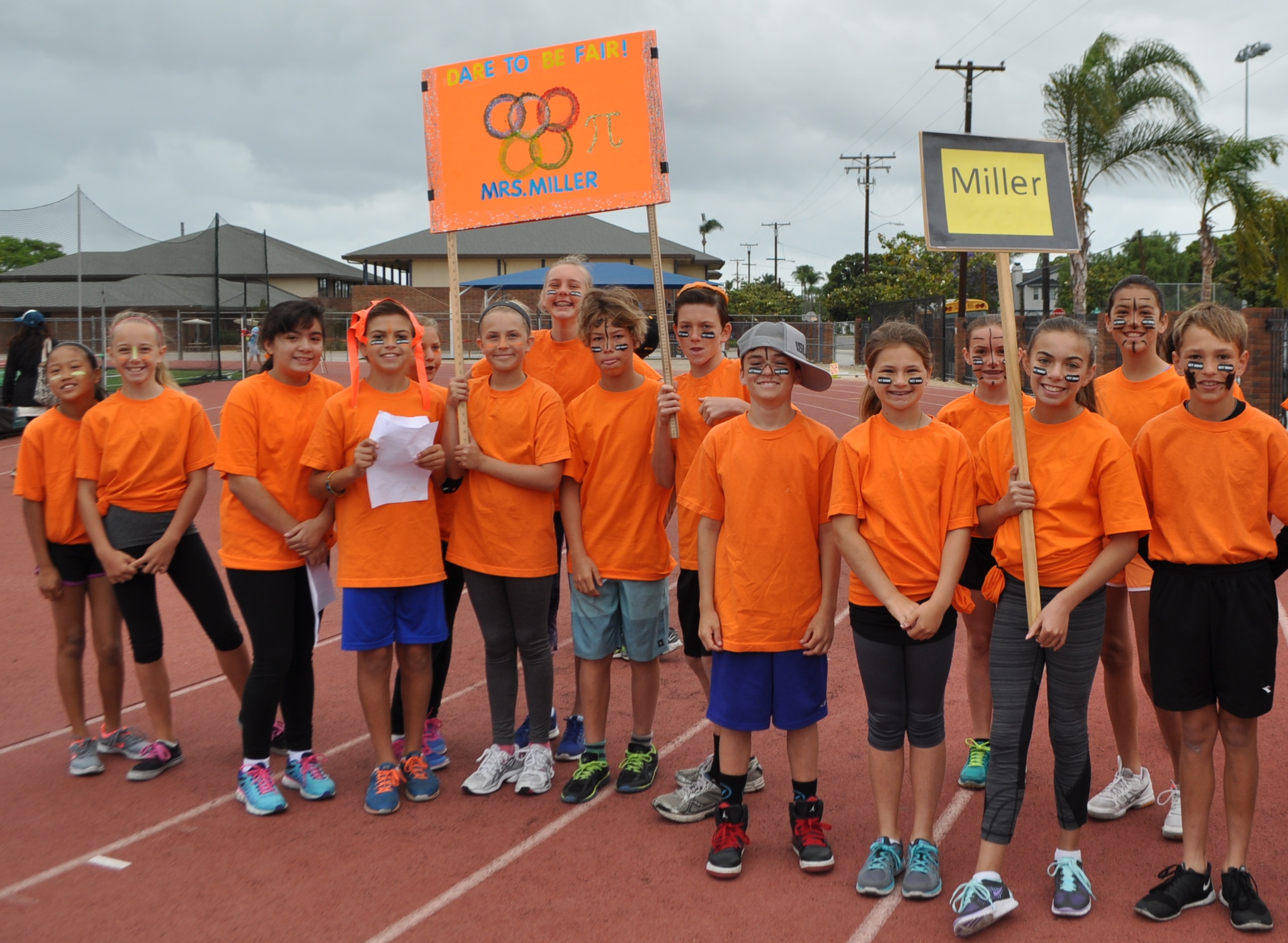 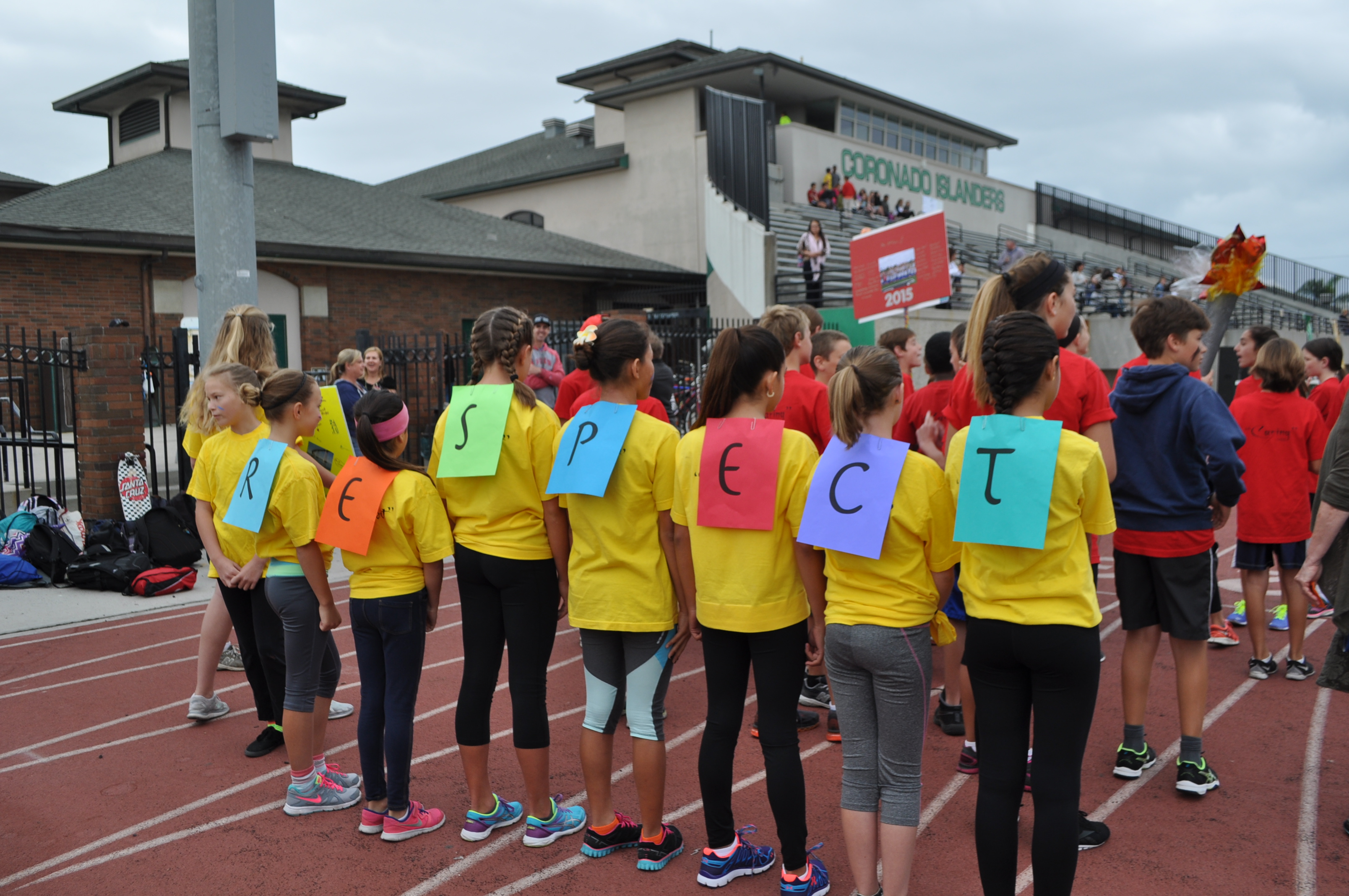 Each class represents a different Ancient Greece city-state and a character counts trait.

Sixth grade Olympics has been an annual event for the last 22 years, evolving with the times, but enduring as a day of excitement and fun, athleticism and character, teamwork and enthusiasm. It takes a great deal of preparation and collaboration, but is a day that both parents and students enjoy and remember fondly for years to come. Many students participate in events they wouldn’t normally try, broadening their experience and pushing themselves physically. 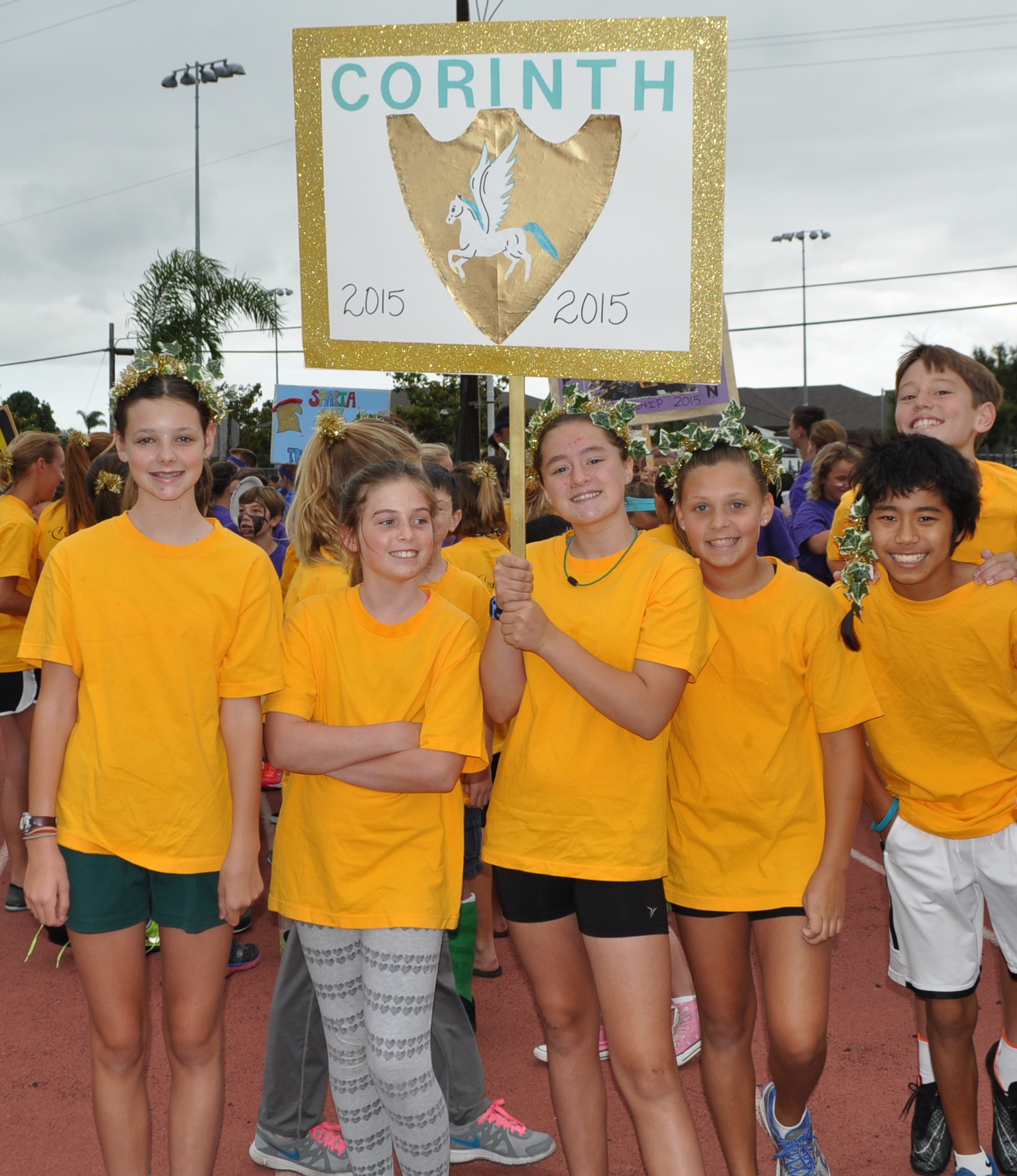 Members of Mrs. Hsu’s homeroom proudly display the sign they made to represent their group.

Bonnie McCann, sixth grade physical education teacher believes “this program is an important addition to the sixth grade year.” She added that the event takes a lot of cooperation between many entities to make it happen. The sixth grade students study and learn the different Olympic events and are each entered in three events of their choice. 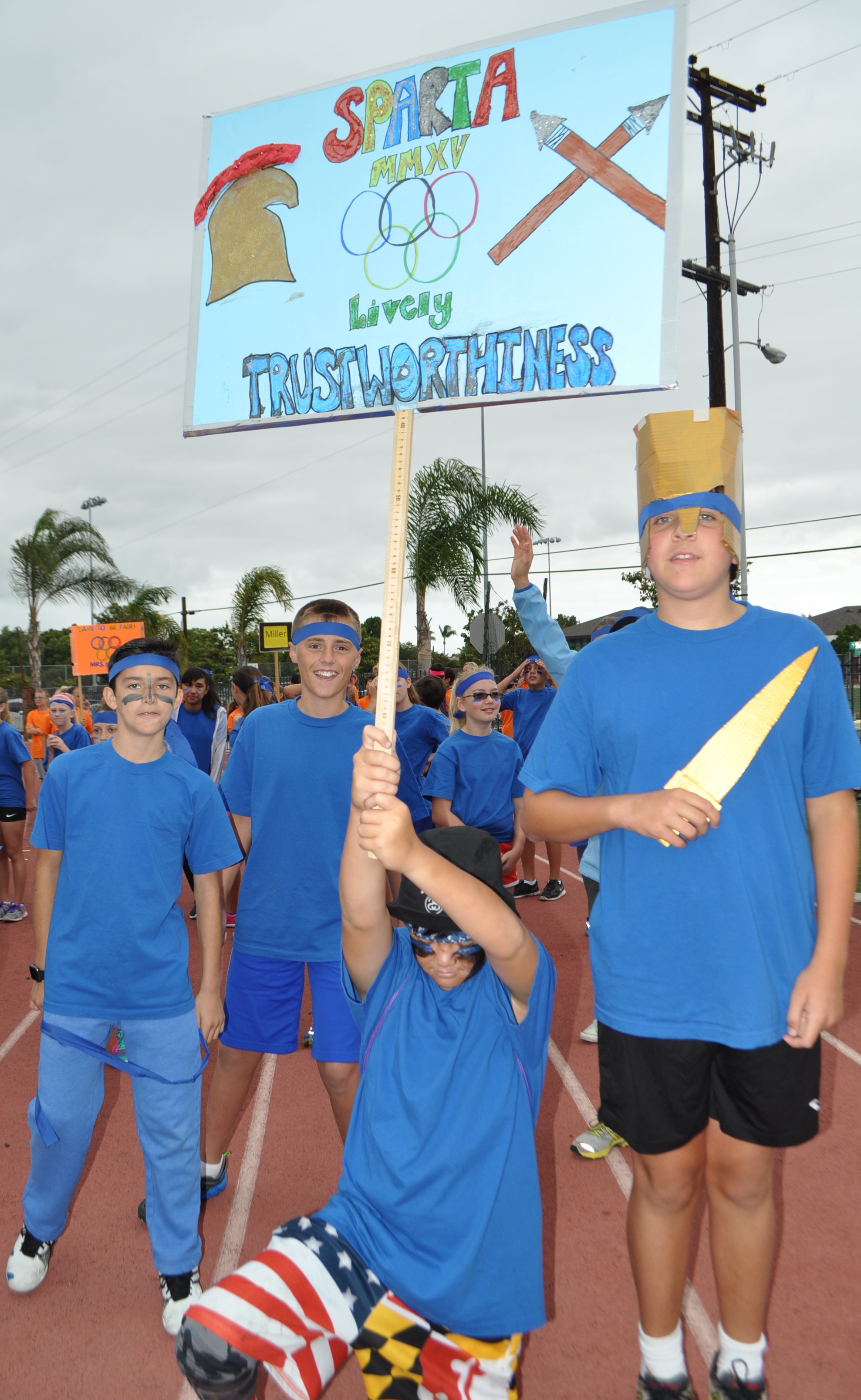 Modeling itself after the Summer Olympic Games, sixth grade Olympics is designed to teach the California state standards for history and humanities related to Ancient Greece, as well as the California state physical education standards, focusing on understanding the workings of a large group athletic competition. The event also strongly focuses on the Character Counts traits taught and modeled by students and staff throughout the district as part of the character education program. 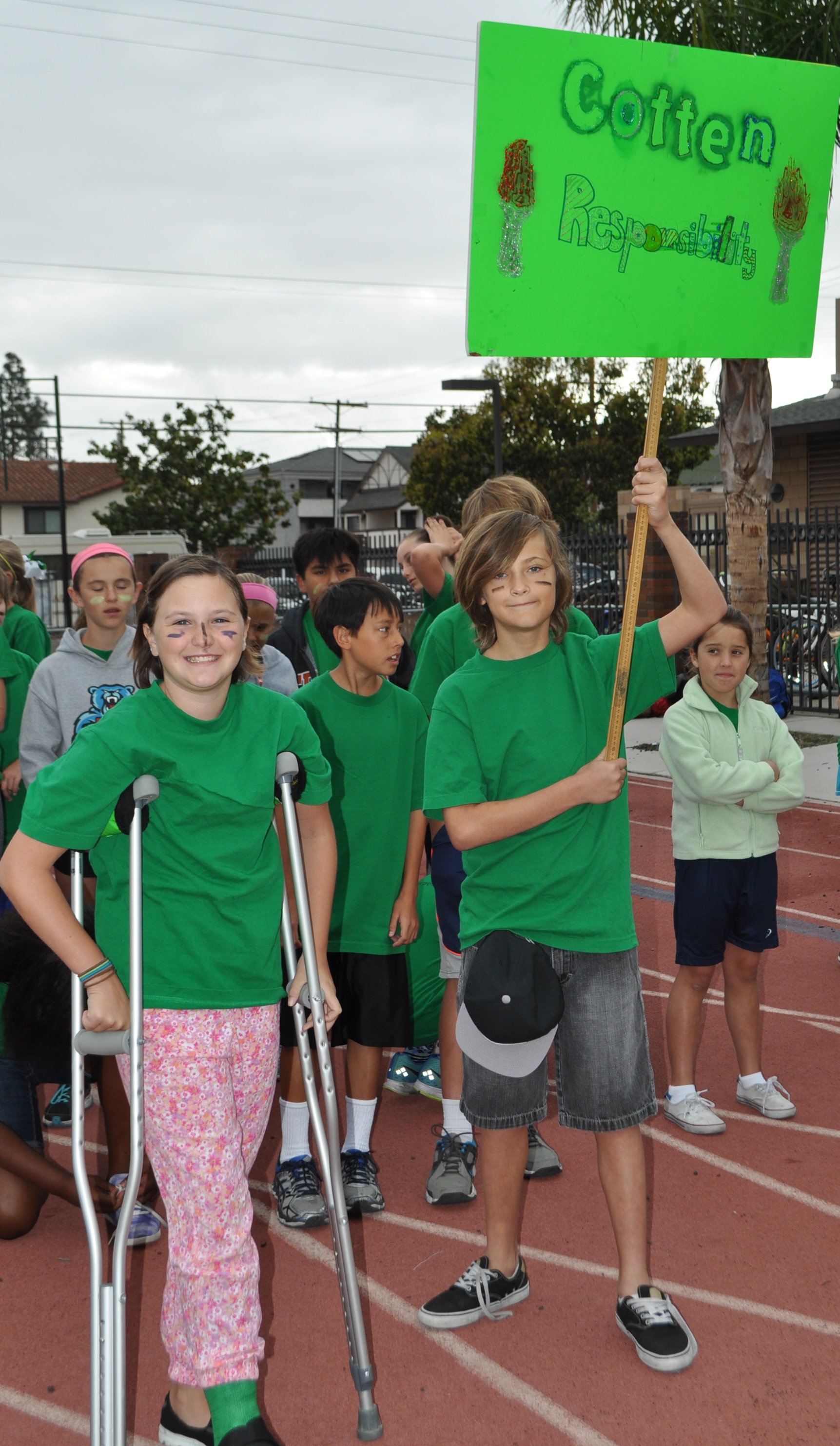 The event started at 8 a.m. on Neidermeyer Field on a cool and overcast day. Each homeroom class represented a city-state from Ancient Greece and a color/trait from the district’s character education program. The students displayed posters they created in class identifying their city-state (carried during opening ceremonies) and wore shirts generously donated by the Optimist Club of Coronado (CMS Mouse Squad helped organize and distribute the shirts.) The shirts are screen printed with the homeroom’s character trait on the back. 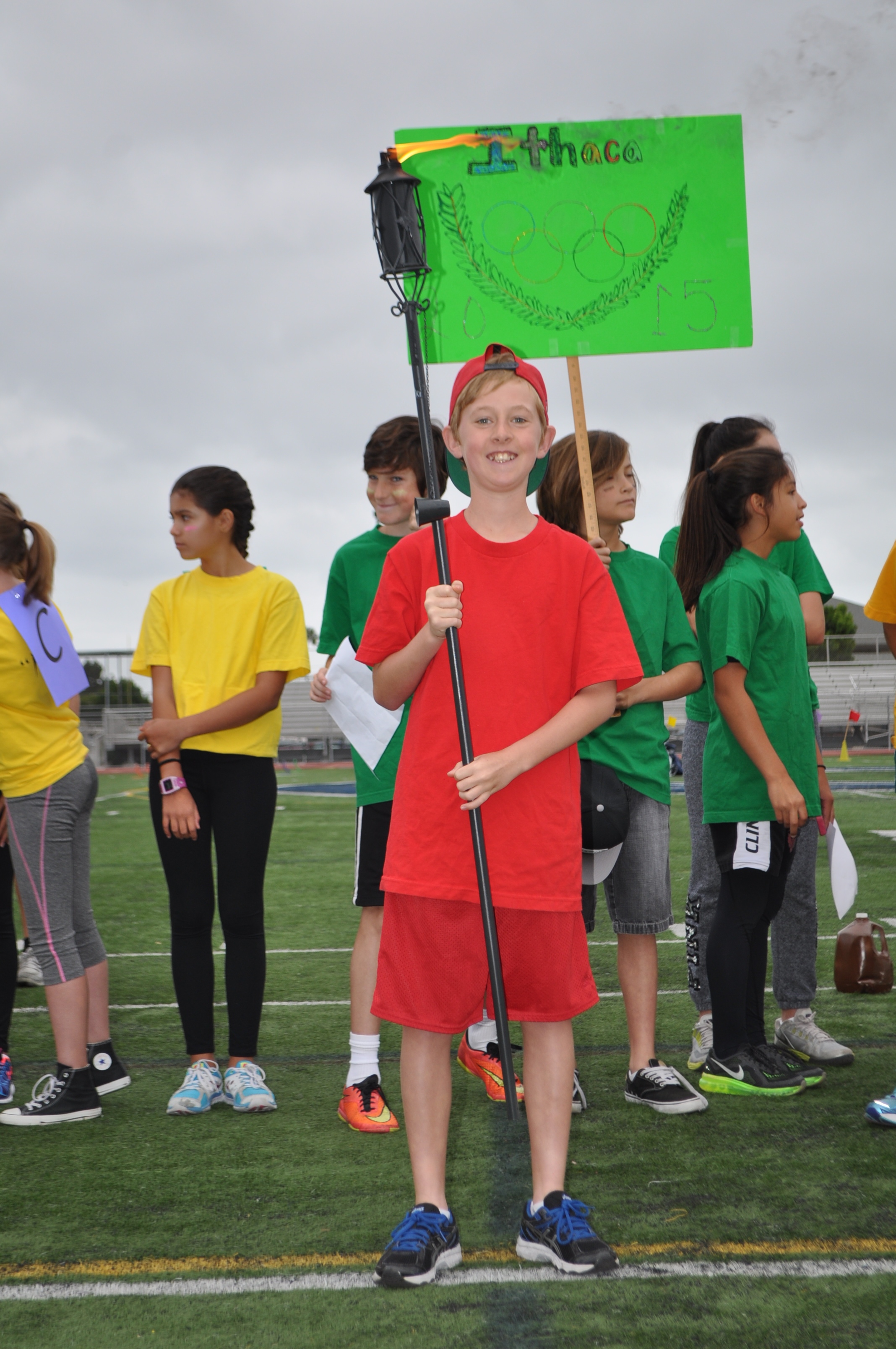 Jackson N. carried this torch during the parade of athletes and opening ceremonies.

The parade of athletes officially kicked off festivities. Each homeroom carried their sign and all students walked the track. CMS sixth grader Christine O’Malley performed the National Anthem with poise and perfection far beyond her years. Jessie Garcia presented the Olympic creed, motto and took the Olympic oath symbolically for all the athletes competing. 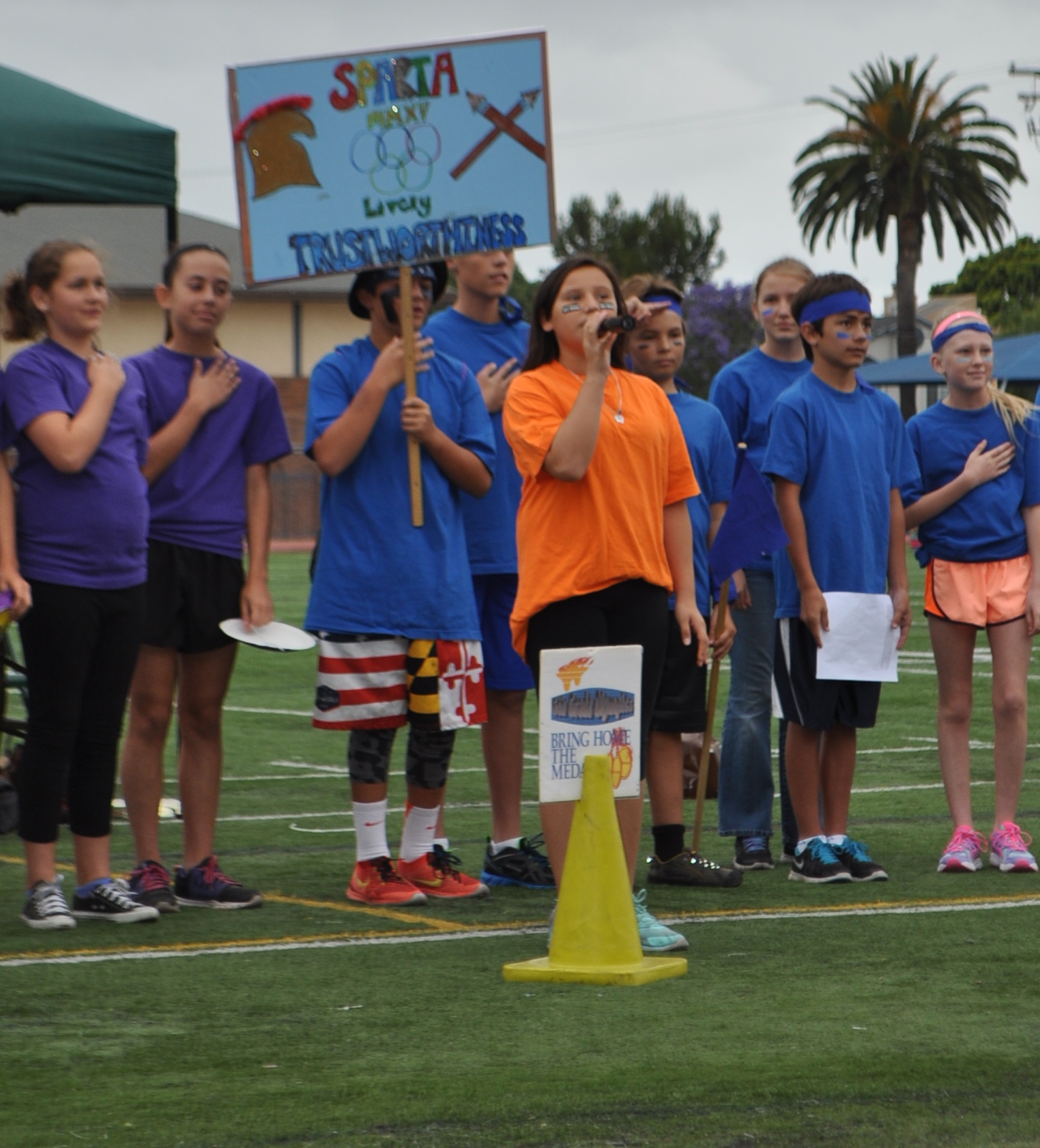 The National Anthem was delivered beautifully.

Each class had representatives who presented a student written interpretation of their character trait. Some were mostly serious and a few were sprinkled with humor, but all were creative and sincere. The pledge of allegiance was lead by Samantha Lorr and Amelia Hawley. 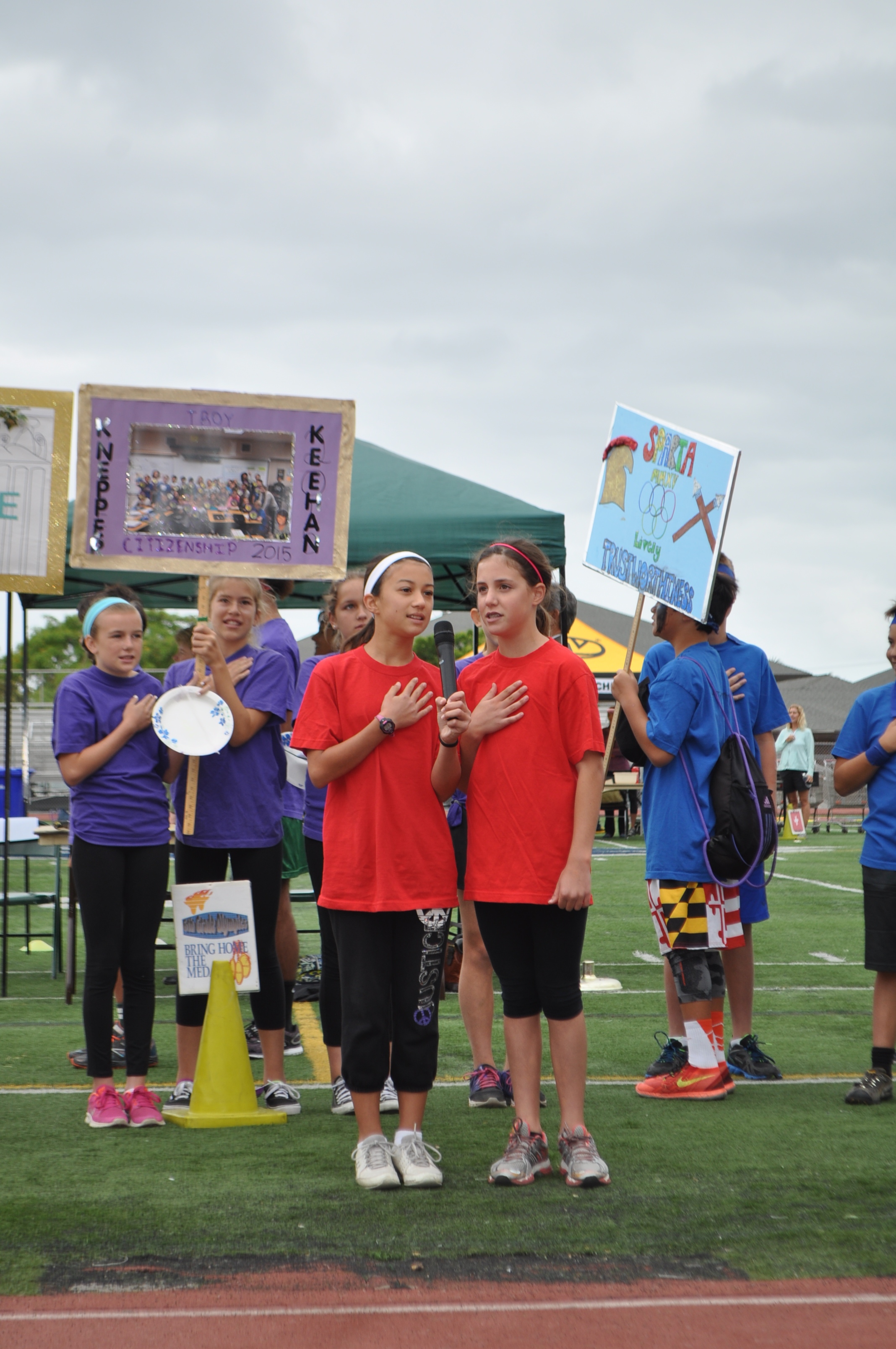 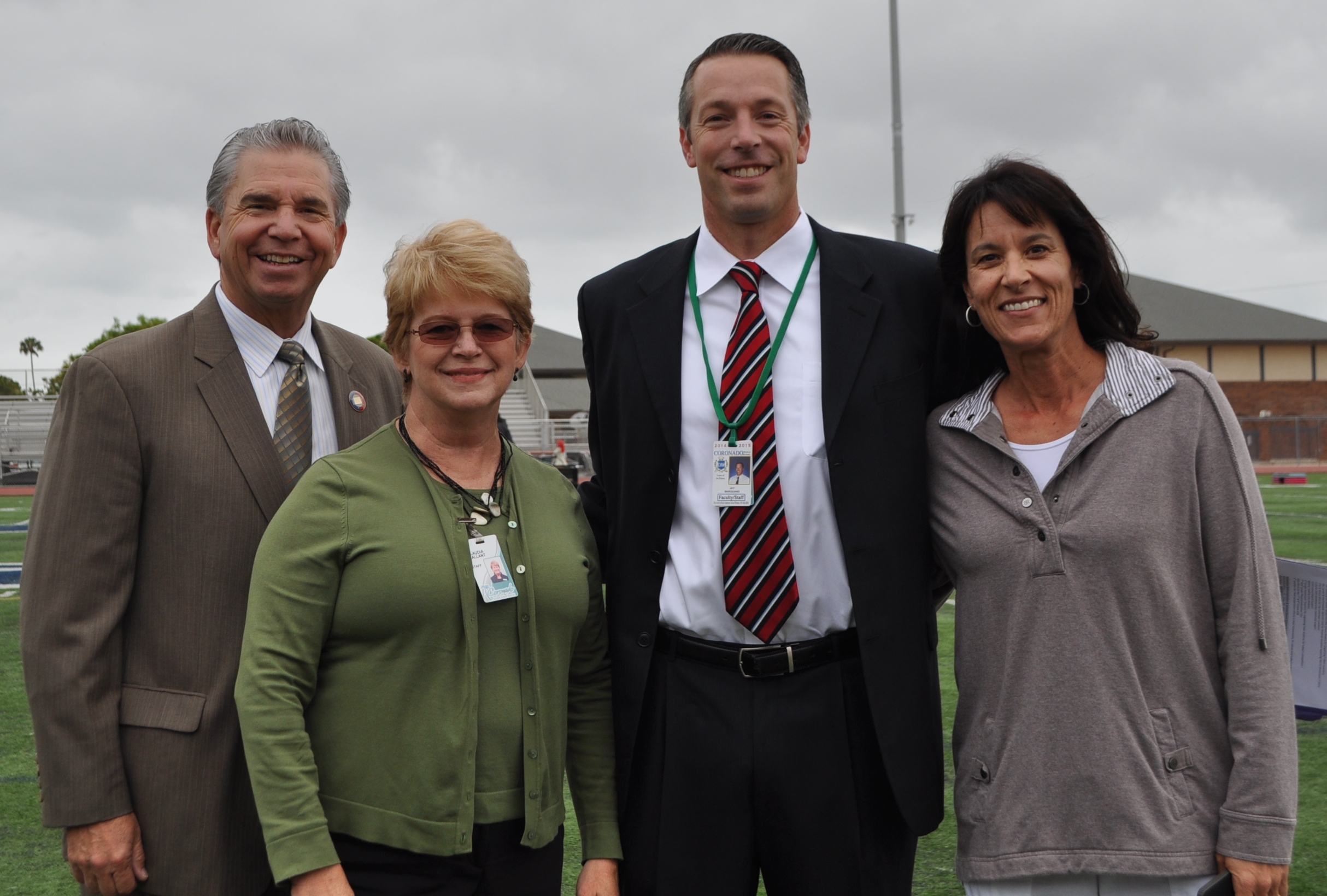 Students engaged in a variety of outdoor track and field activities, as well as competitive swimming and water polo. All competitions were held at Neidermeyer and Cutler fields and at the Brian Bent Memorial Aquatic Complex. In addition to traditional Olympic events, there was an obstacle course and throwing events, offering all students the opportunity to compete in something fun and physically challenging. 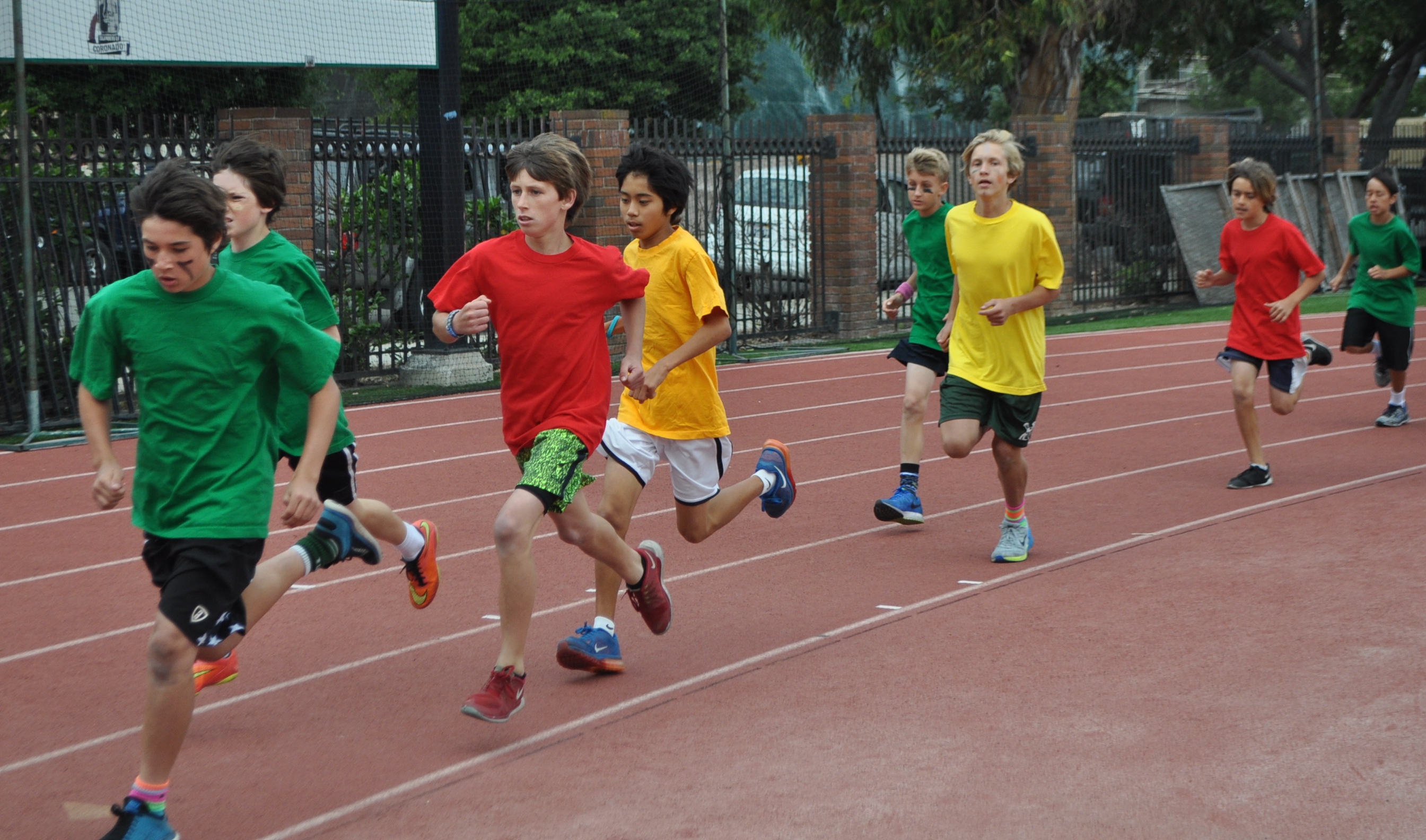 Competitors in one of the distance running events round the corner during their race. 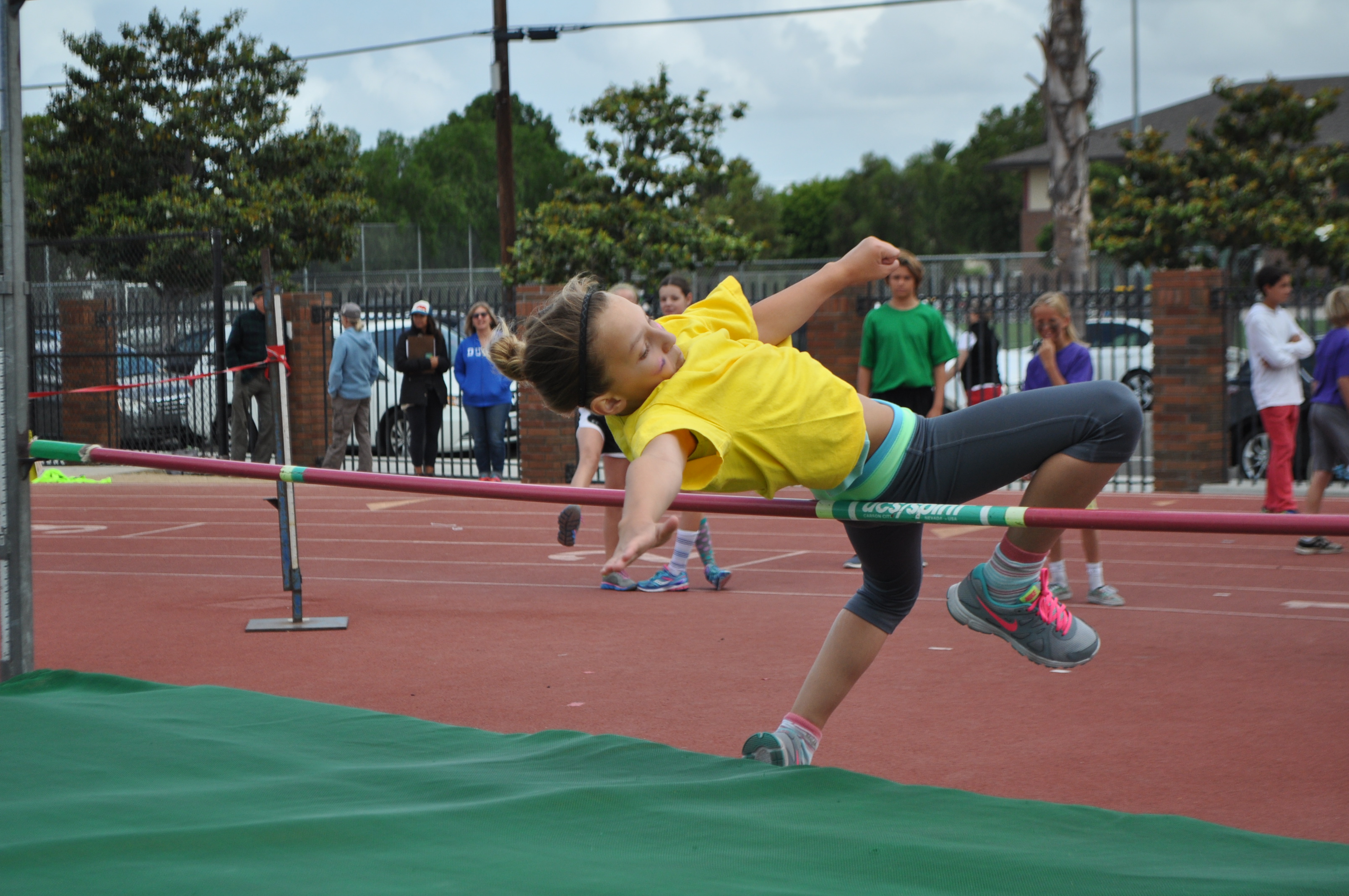 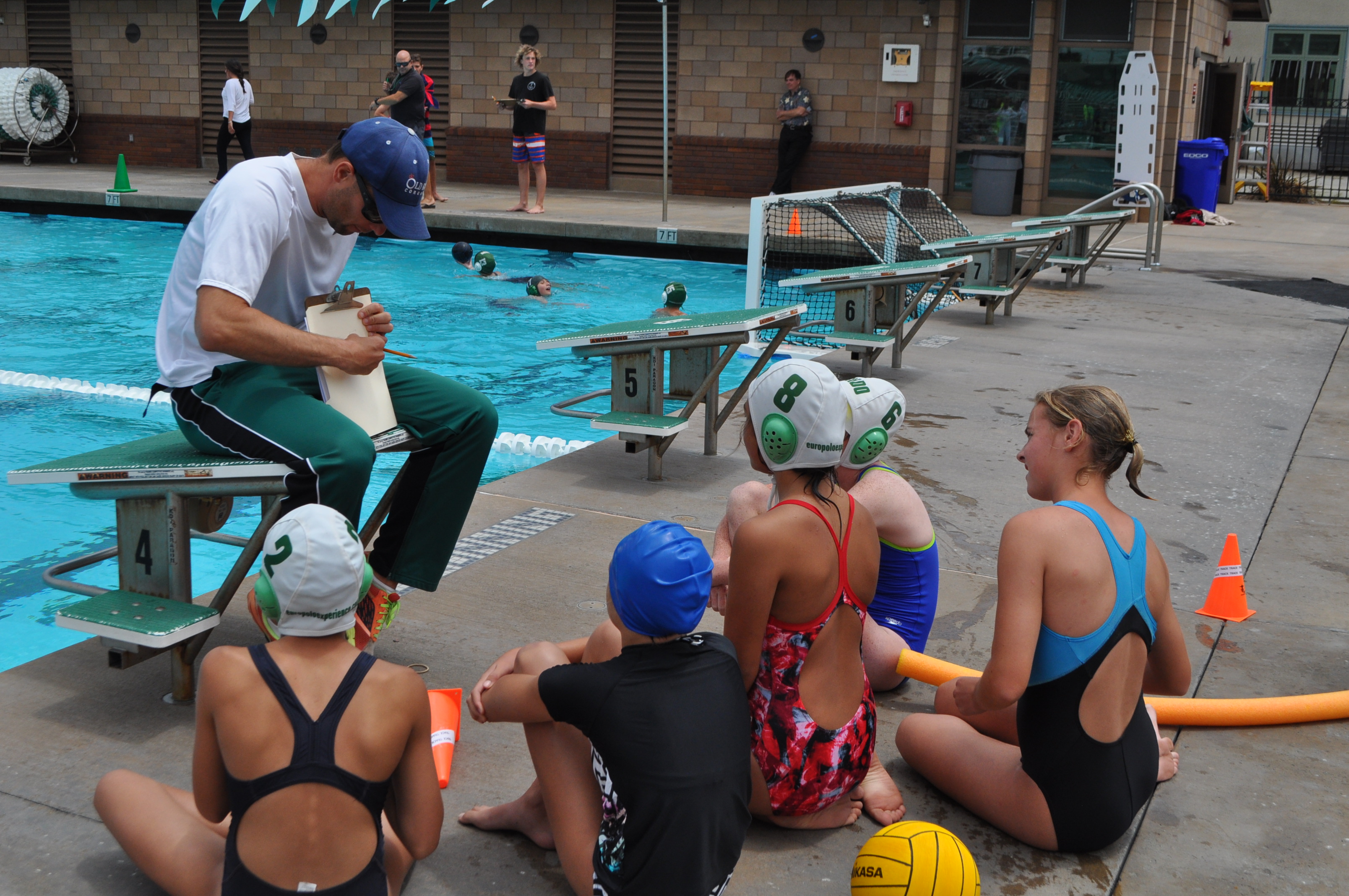 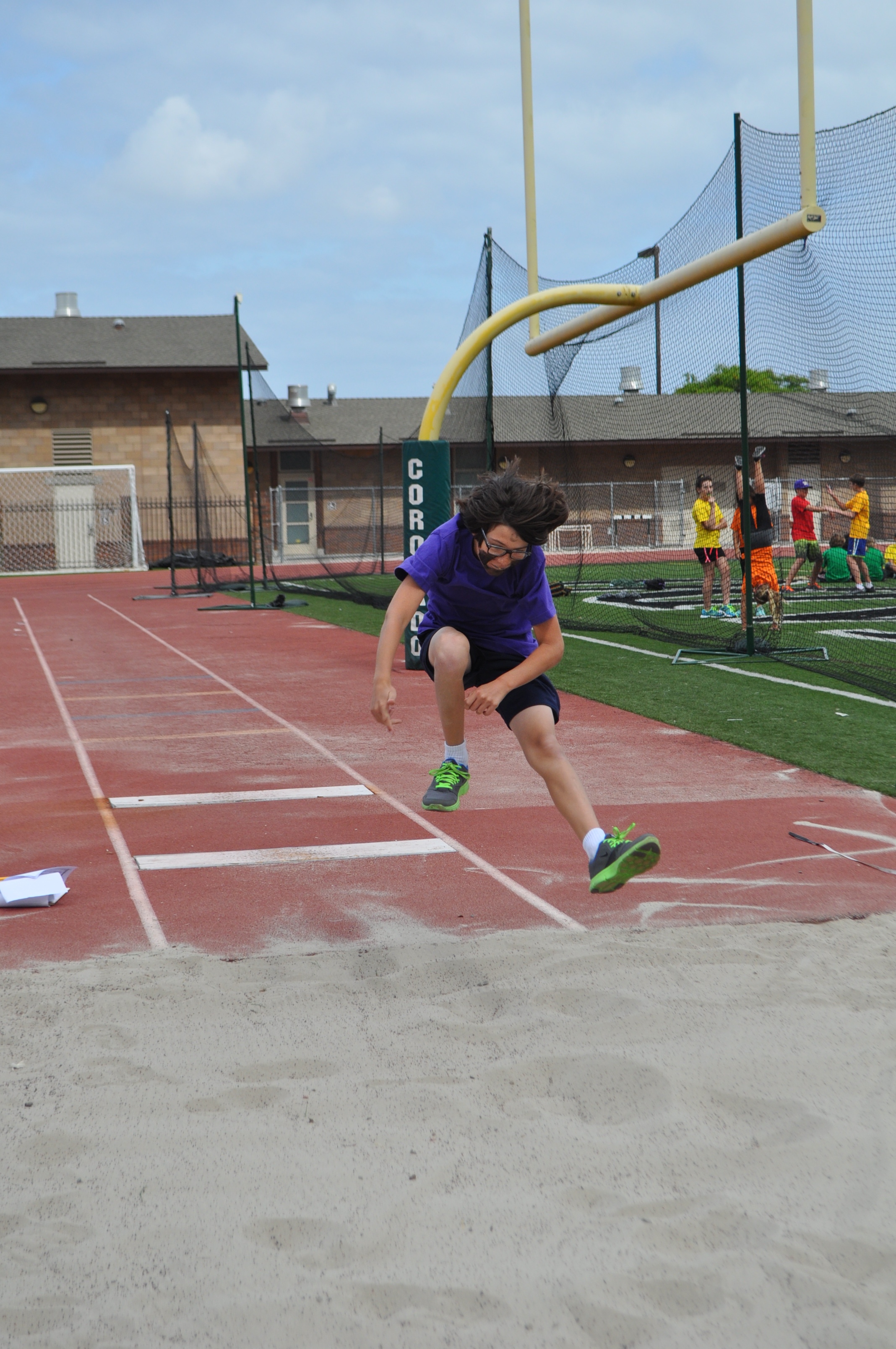 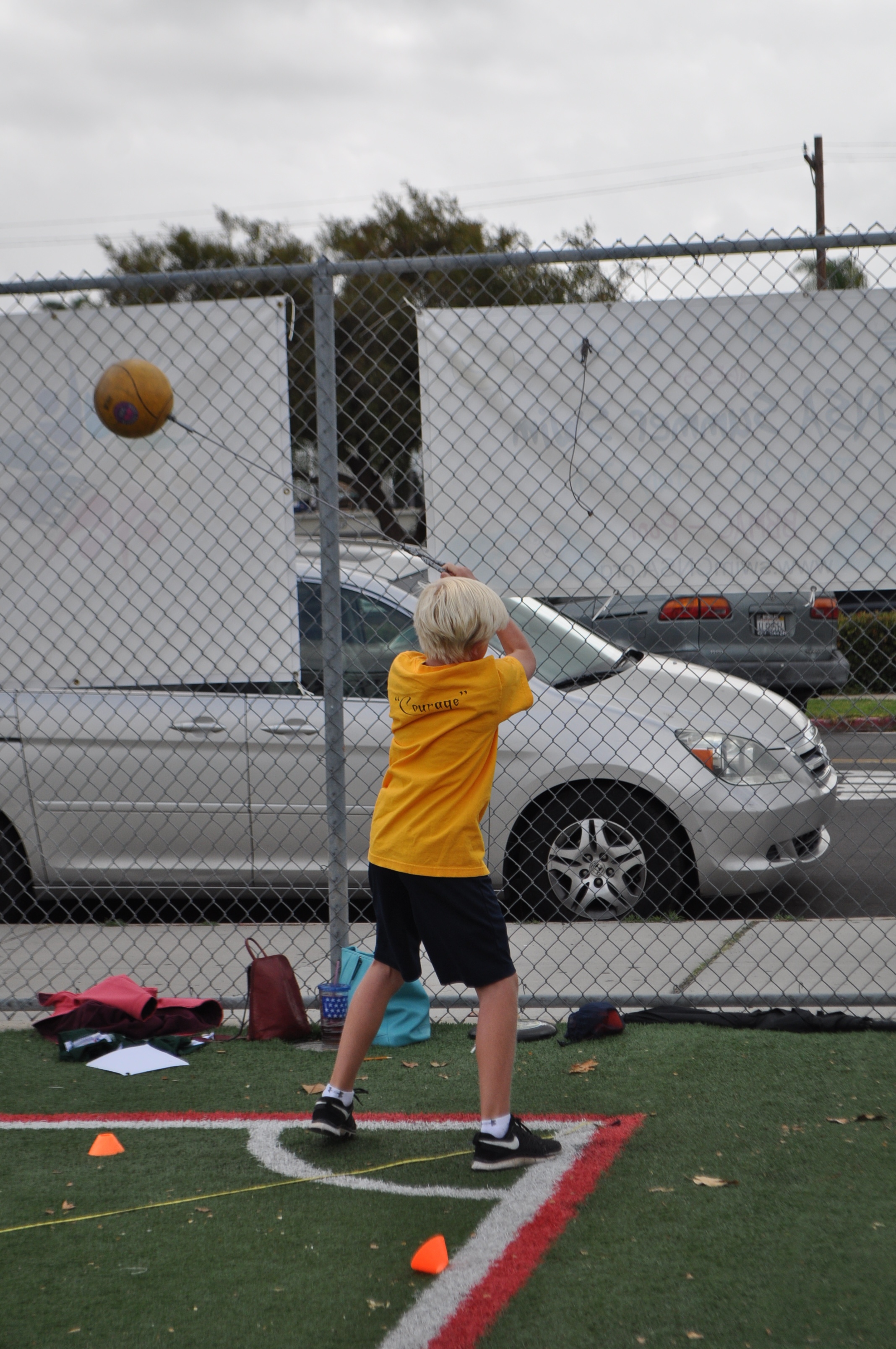 Events included the long jump and a modified hammer throw. 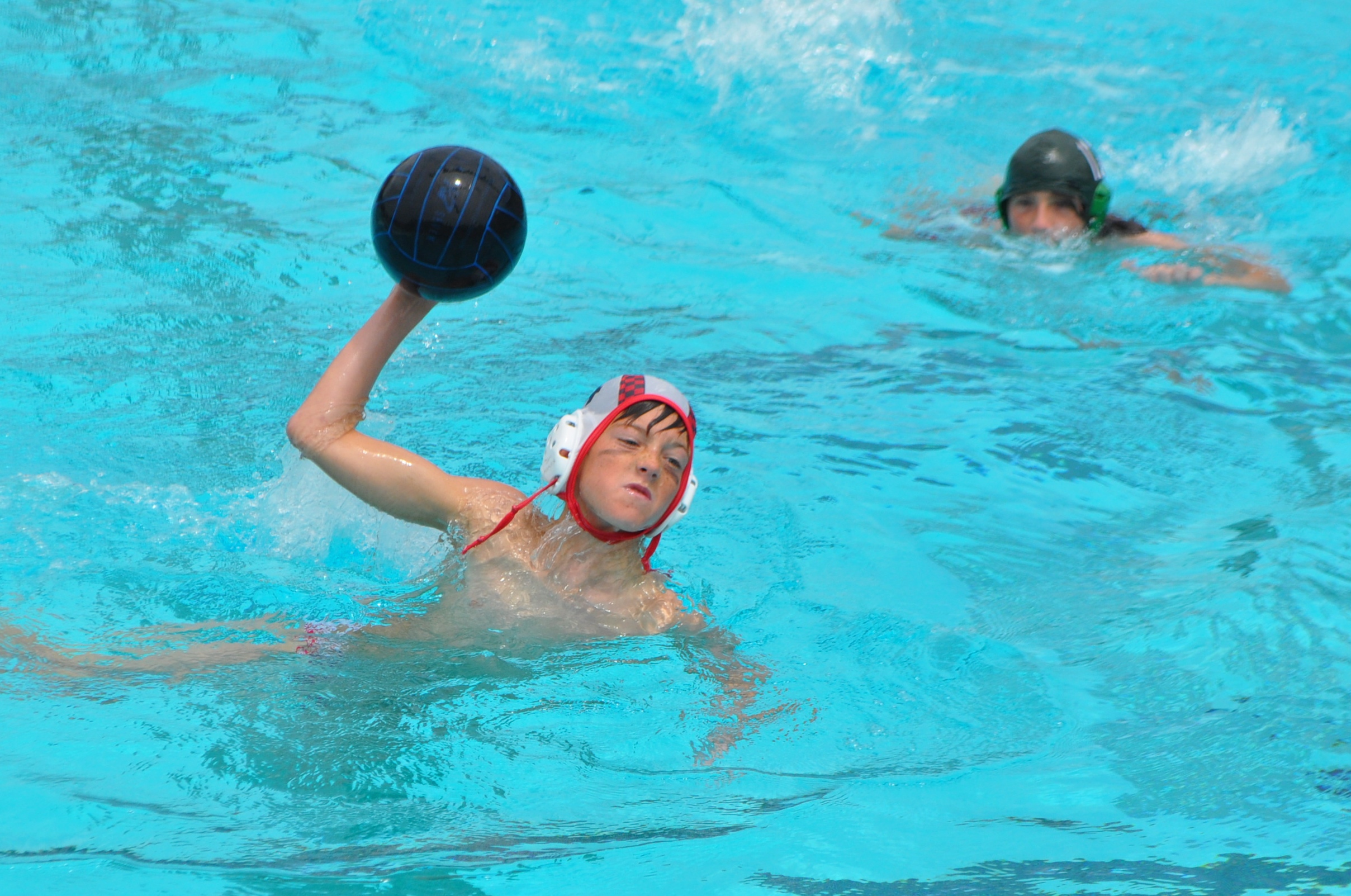 A water polo competitor gets ready to take a shot on goal.

The top six finishers in each event were recognized, places four through six with a ribbon and places first through third with a medal. Medal winners were photographed with an olive wreath. Parent volunteers, lead by Dawna Kevicki for the third year in a row, helped run the entire event, serving as timers, starters, recorders and everything else necessary to make the day a success. Scores were awarded to each homeroom, and at the end of the competition, the coveted trophy was awarded to Mrs. Hsu’s homeroom class.

The girls are off and running during one of the relay events. 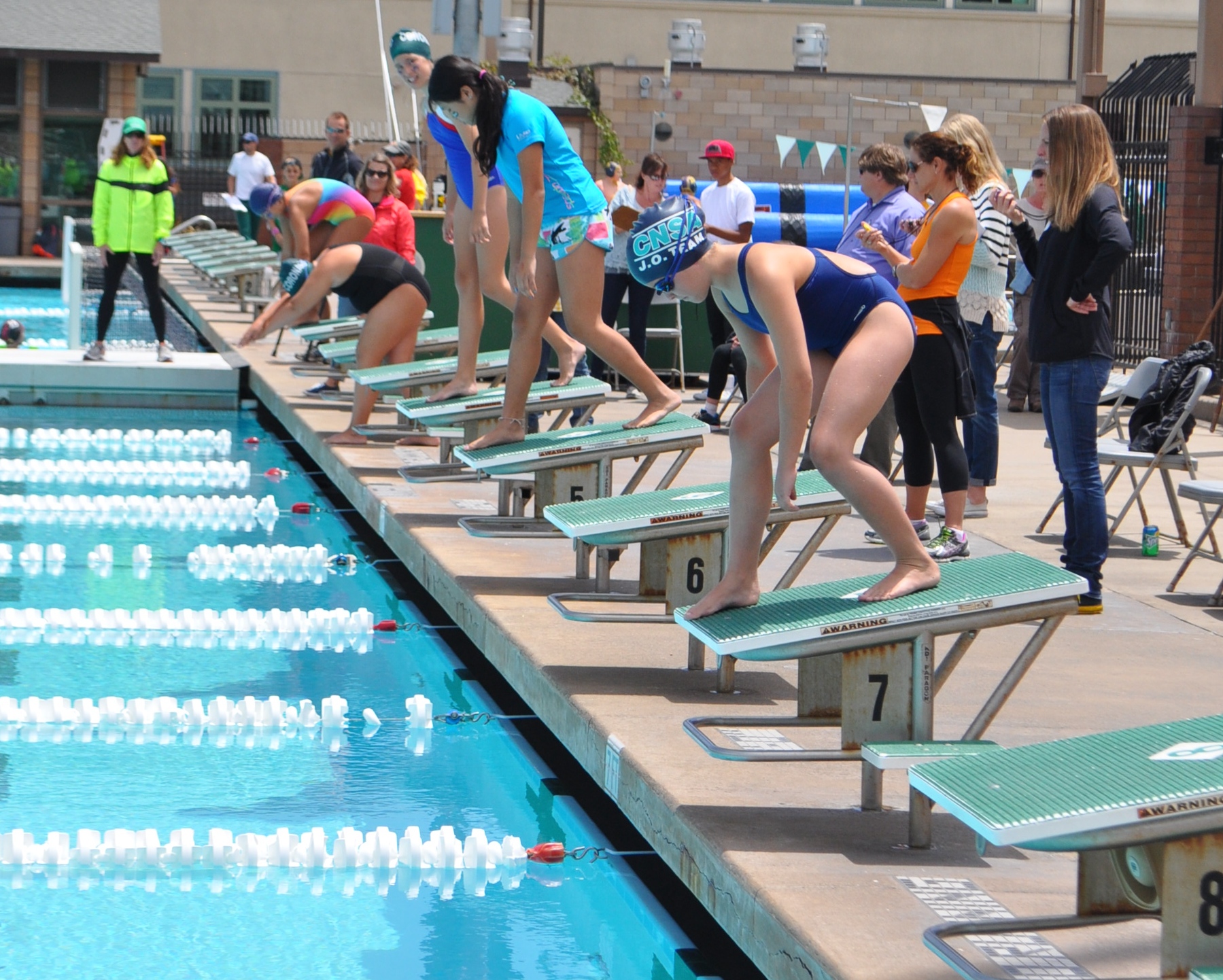 Swimmers competed in individual and relay events at the BBMAC. 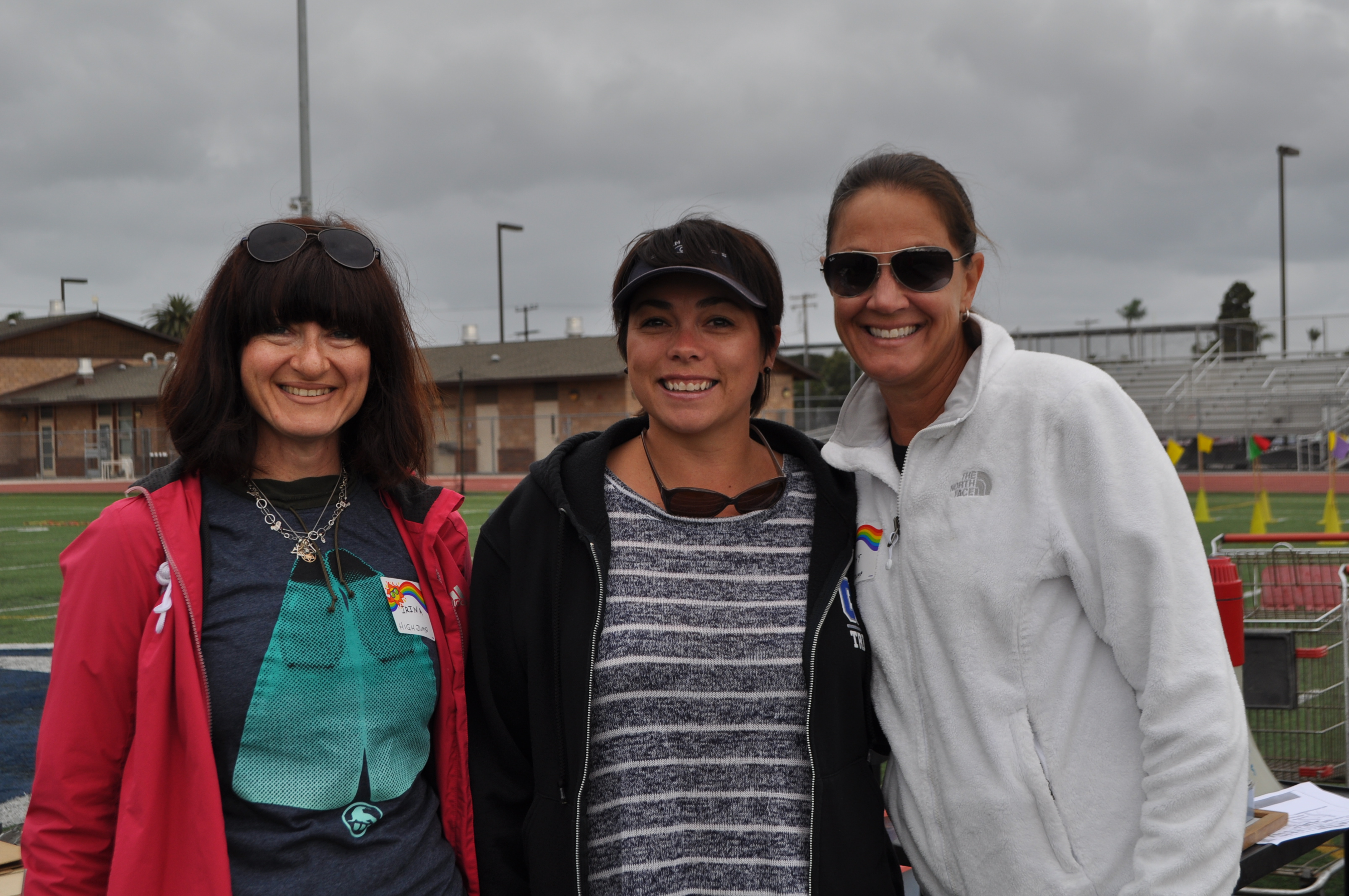 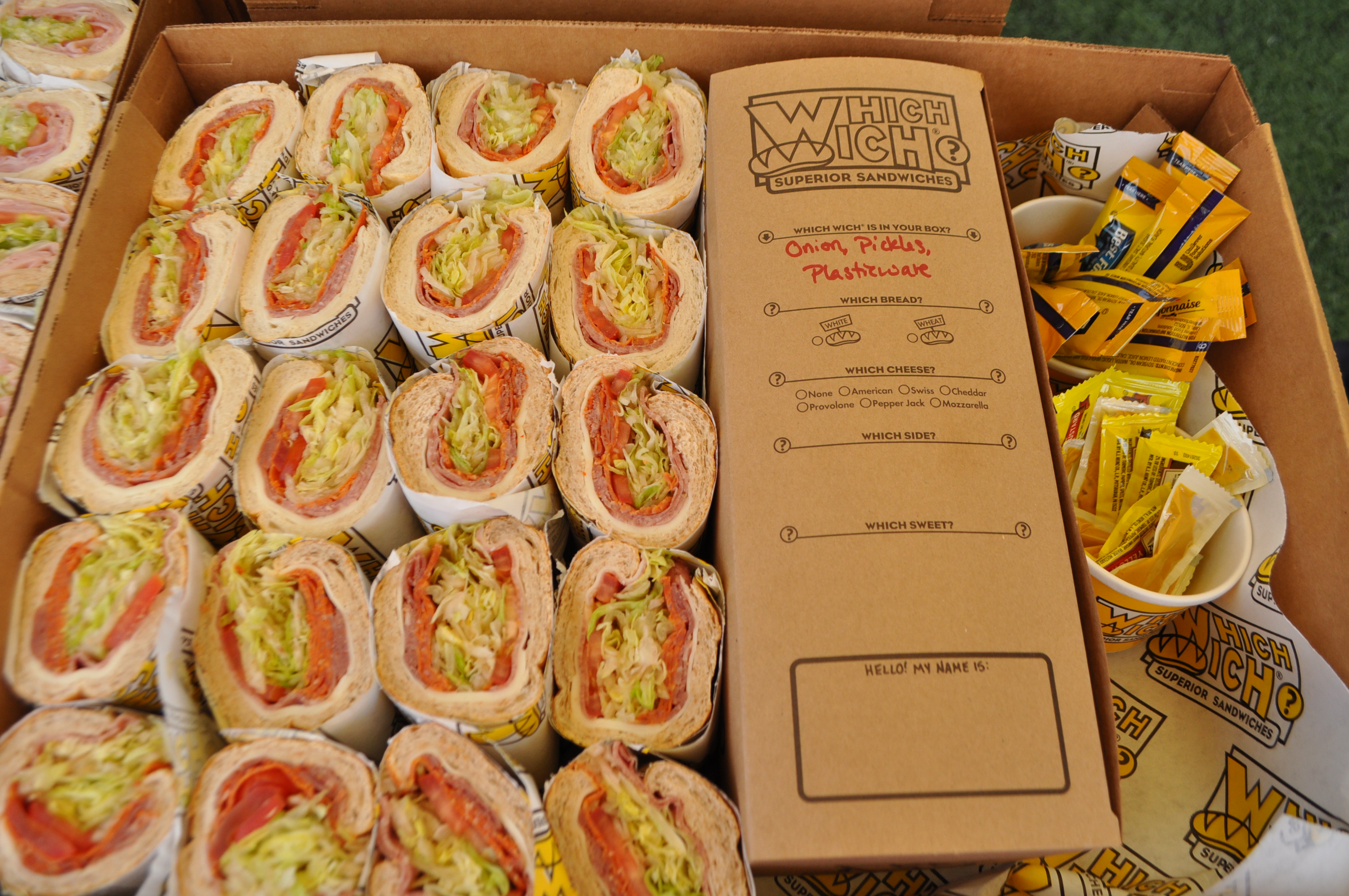 Many people over the years have helped keep this event the success it is, but Ms. McCann especially thanks Dawna Kevicki, Deann Brown and Sherril Altstadt for helping streamline the program and Jennifer Landry “for making stuff happen!” 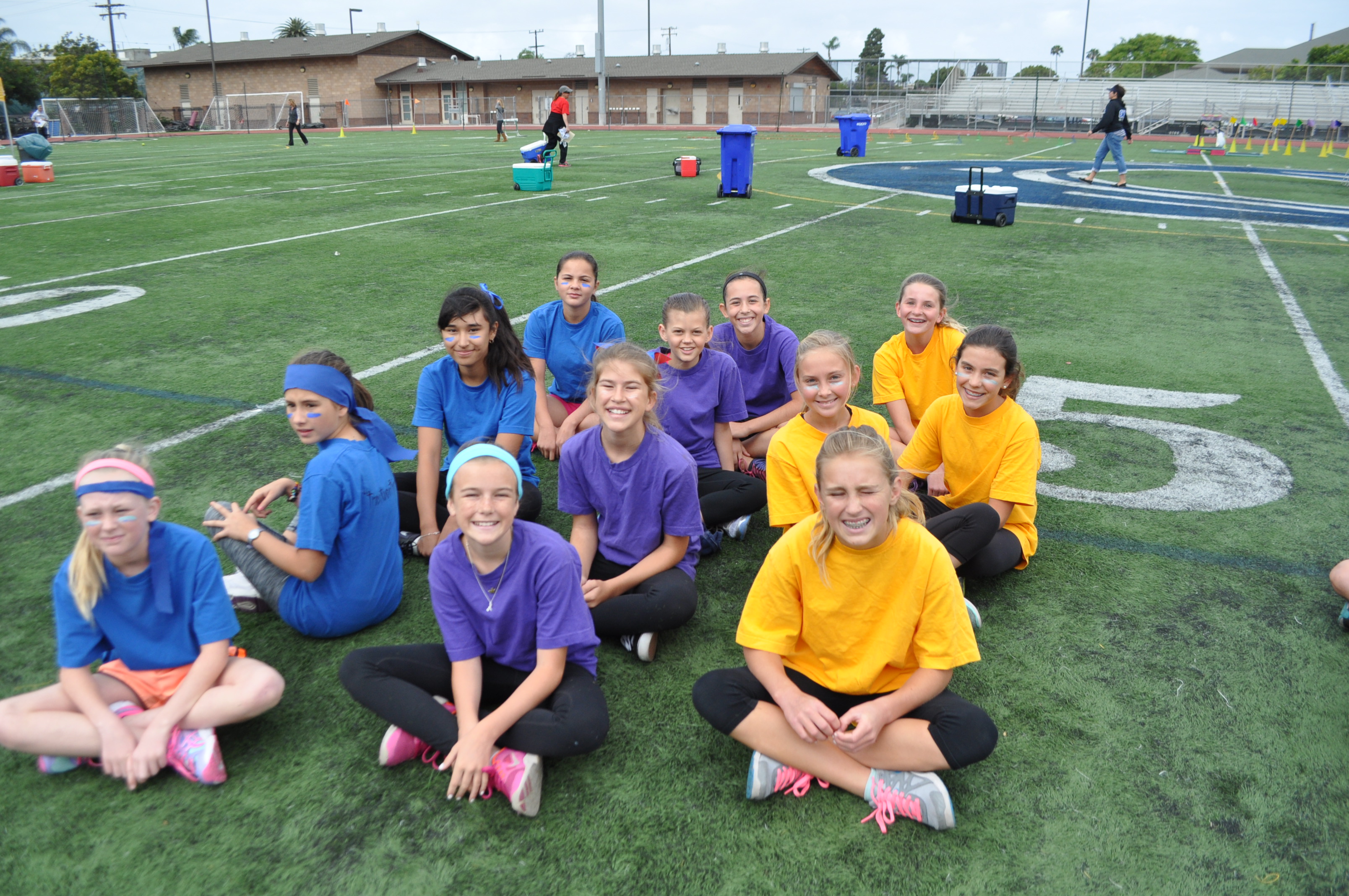 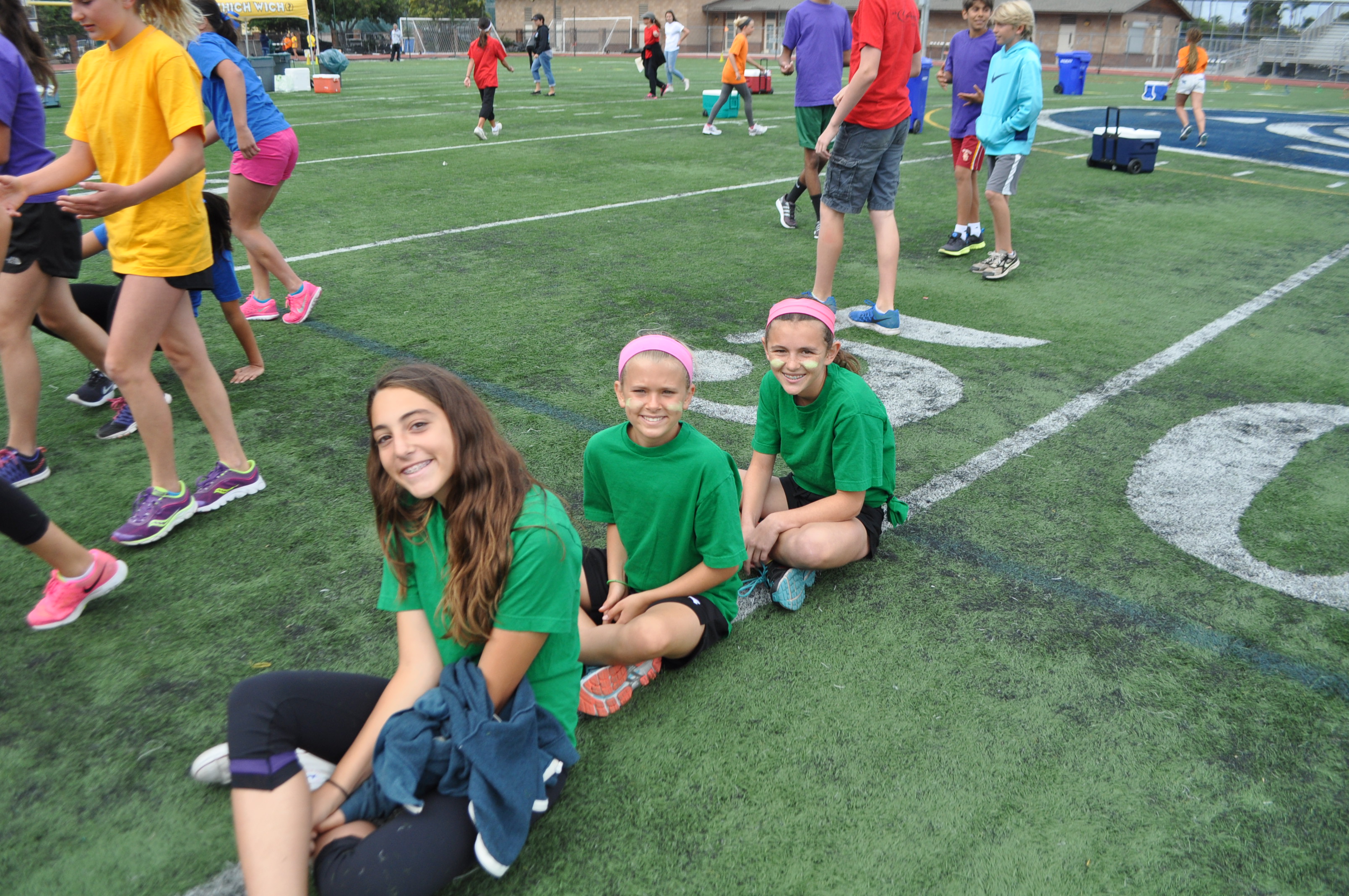 Waiting for their running relay to start. 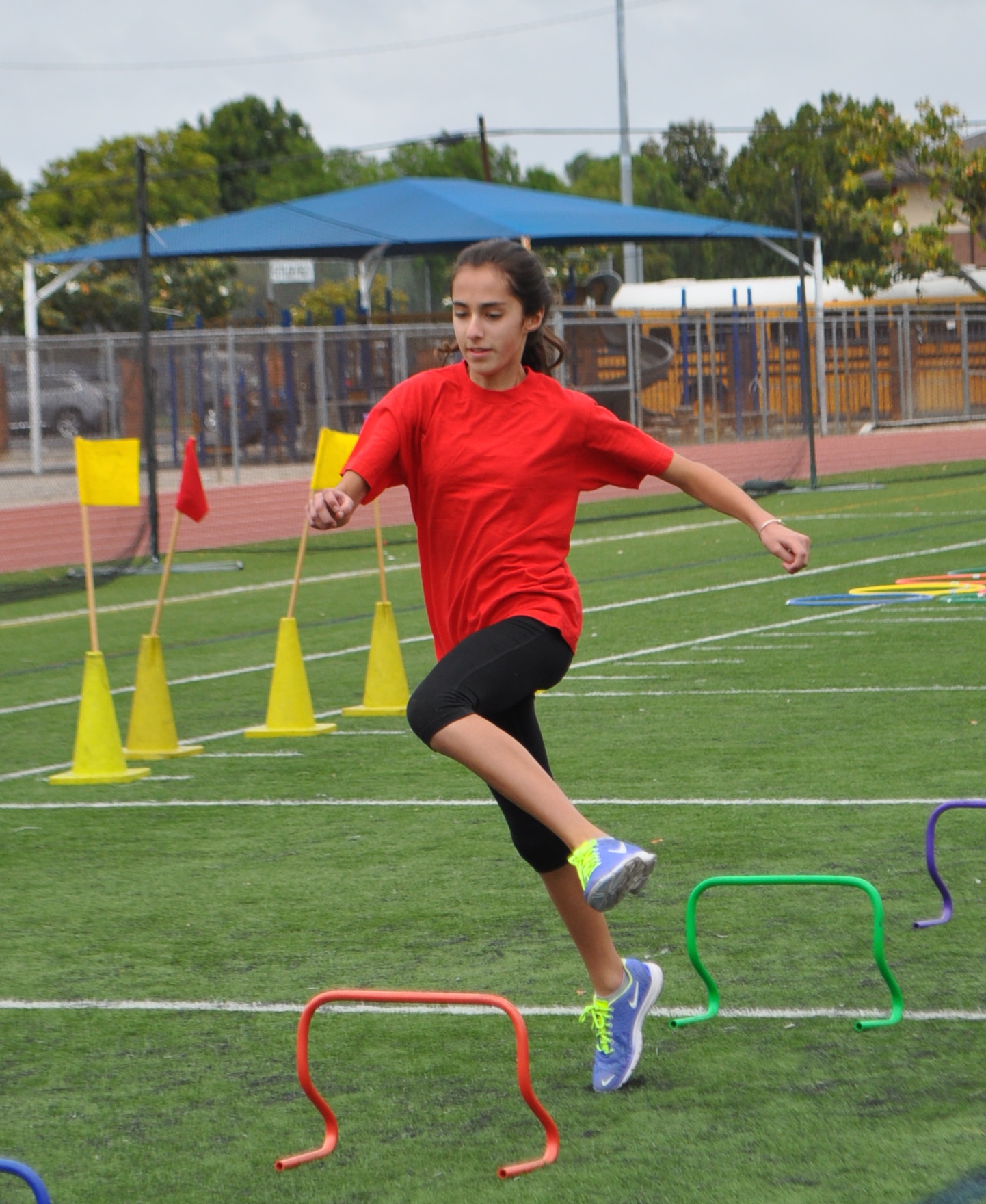 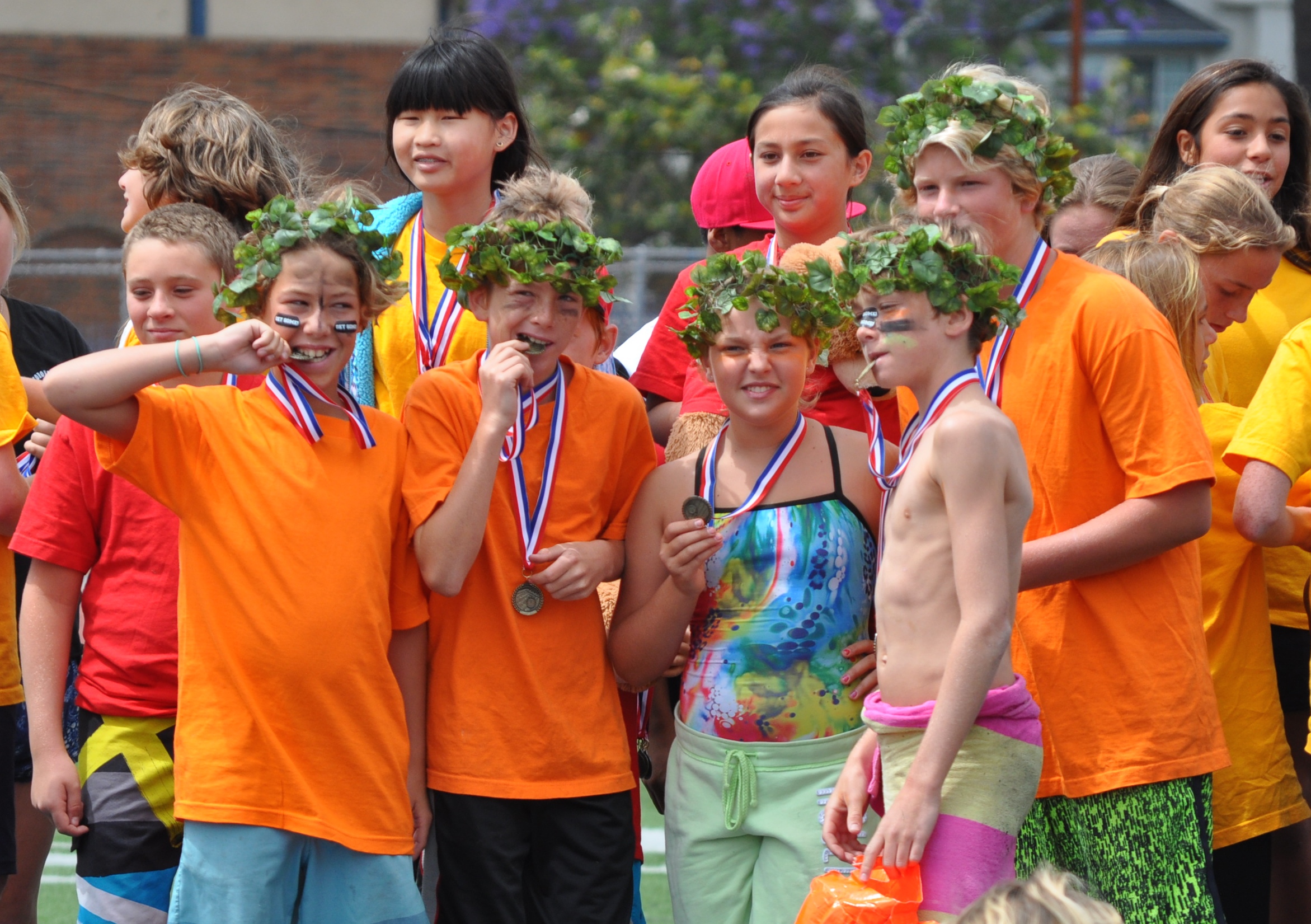 One of the many medal ceremonies. 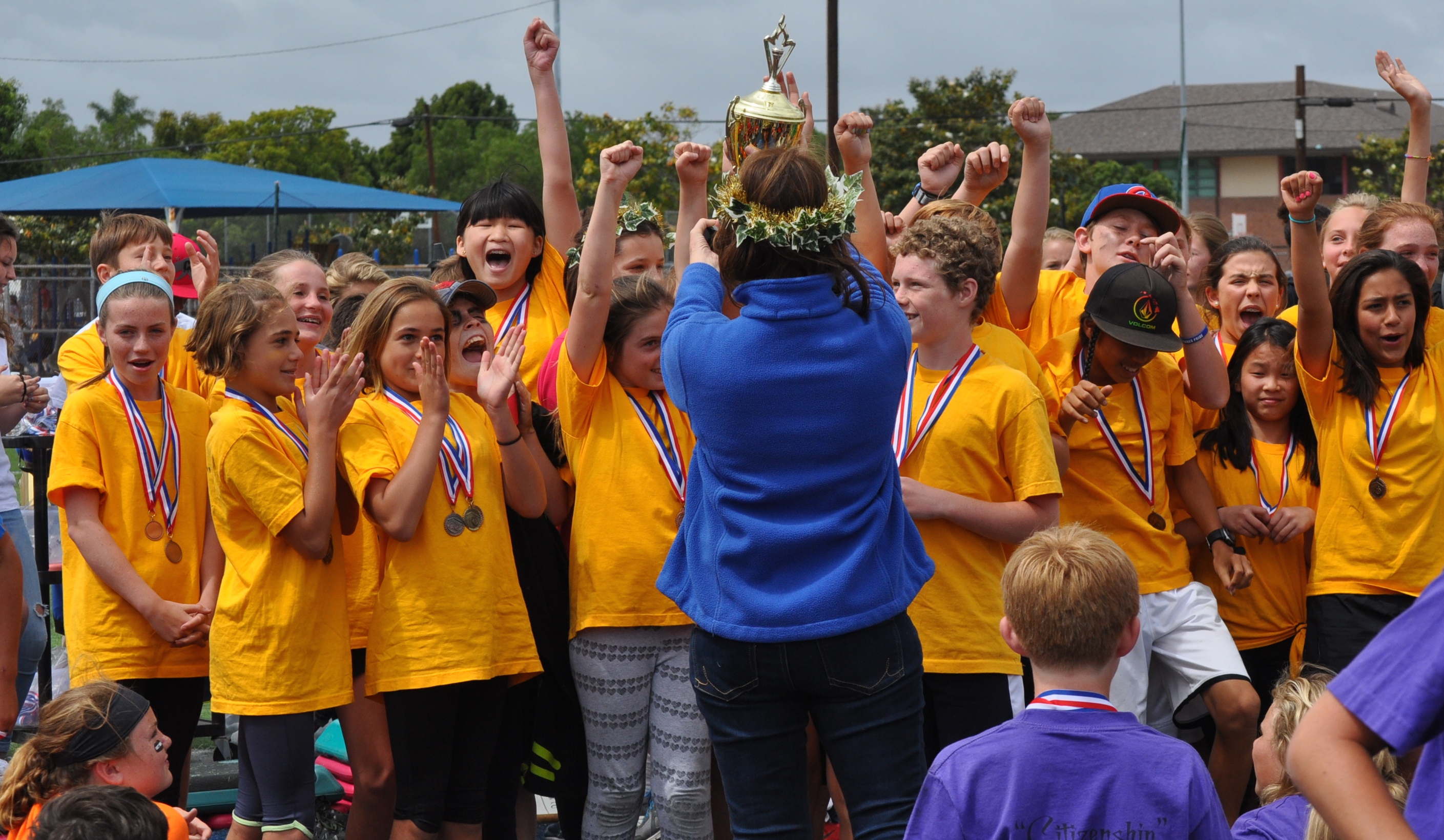 Mrs. Hsu’s class celebrates their victory. They amassed the most points, taking home the team trophy.

Sixth grade Olympics is important to our students because it gives them an opportunity to explore an Ancient culture both academically, in the classroom, and physically, on the field or in the pool. It provides a forum to build cooperation and teamwork, to execute organizational skills and to band together with classmates. The teams aren’t chosen by skill, strength or speed, but a predetermined assignment to a particular homeroom. Witnessing the students coming together for a common goal, cheering for and supporting each other, and exhibiting the best of sportsmanship are the great rewards of this day and evidence that character counts.

Thanks to Anita Lorr for all the pool photos.