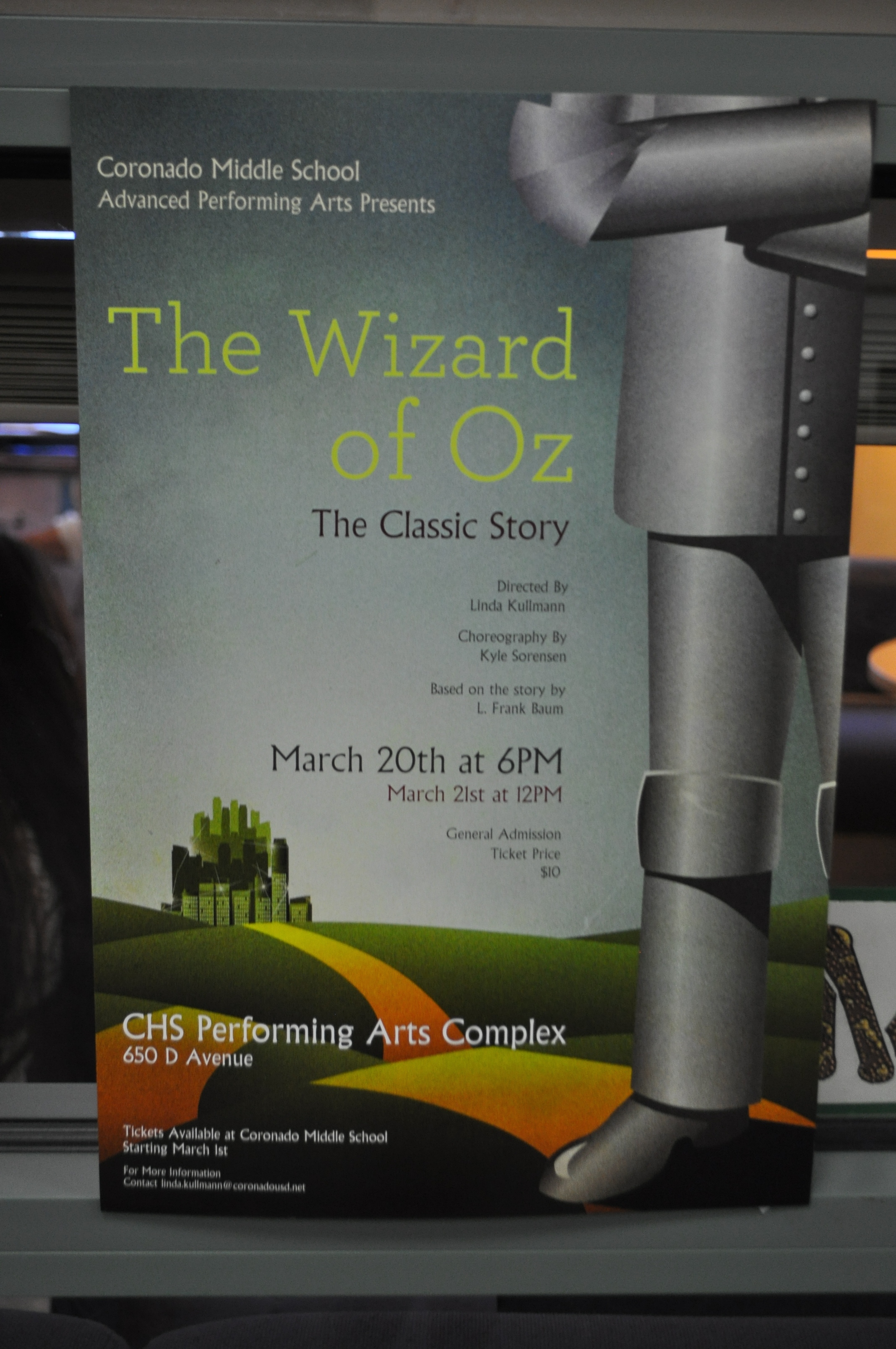 Linda Kullmann is a third generation Coronado resident with “deep roots in this community.” Her mother graduated from Coronado High School in 1947, and Linda attended Coronado schools from kindergarten through her senior year in high school. She ventured off the island long enough to earn a bachelor’s degree in Music Education, after which she returned to Coronado as the music director for the all-schools musical. (The all-schools musical was a big community event that included students in grades 2-12 from the CUSD schools, Sacred Heart and Christ Church schools.)

Two years after initially being hired for the musicals, Kullmann began teaching choir and other subjects at Coronado Middle School (CMS). She has been at CMS for 20 years. Over the years she has taught drama and even high school choir, but in 2001 the idea of offering performing arts was born. She helped develop the classes based on the needs of the students in Coronado. There were so many talented students that an advanced performing arts class was added as well.

Ms. Kullmann describes CMS and CHS teacher Chris McClung as her mentor. “She was one of the most influential teachers I had,” said Linda. “In seventh grade, I developed a love for performing when I was cast as the screamer in Bye, Bye Birdie! and I was hooked.” 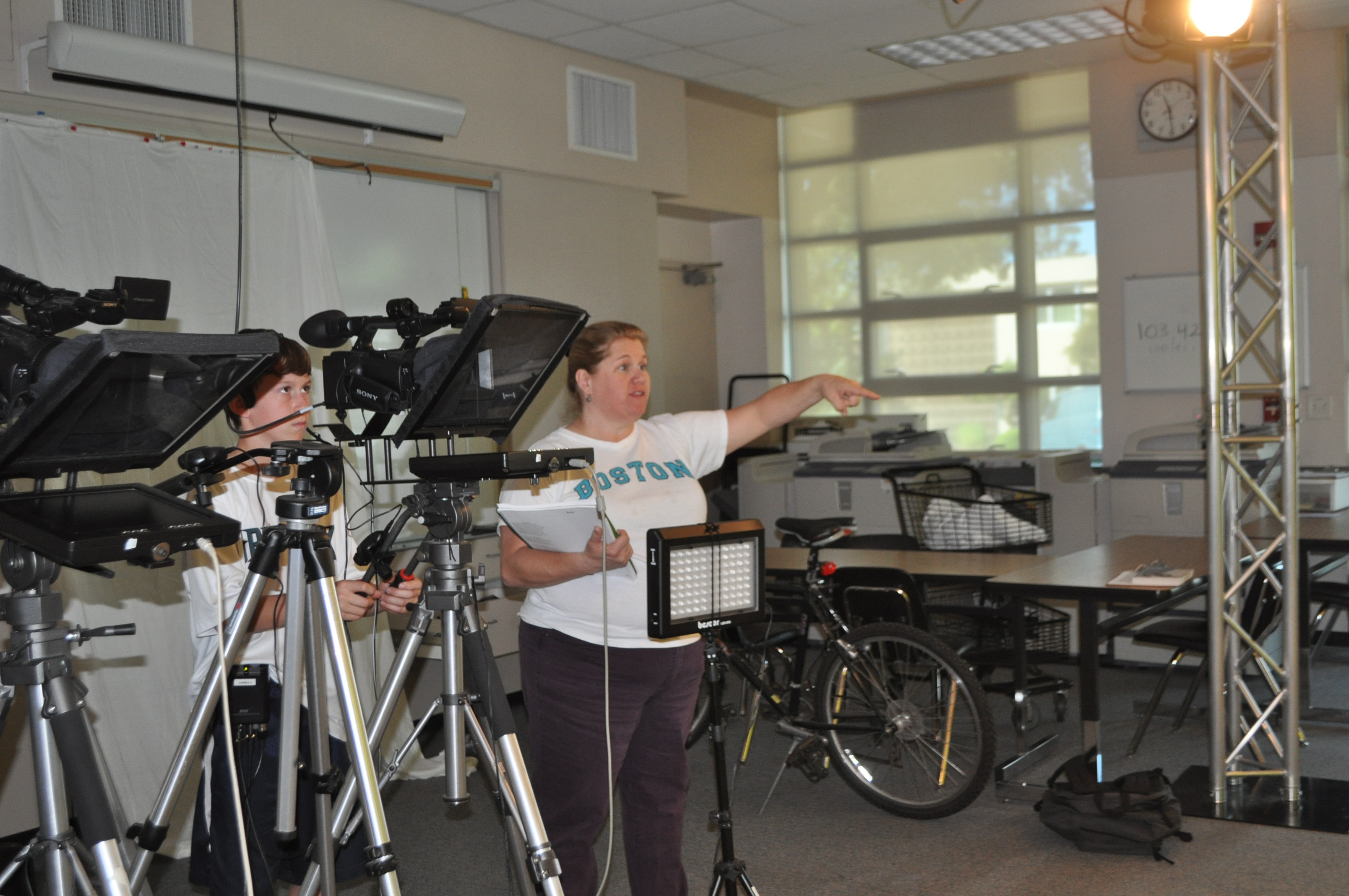 “I have learned confidence, teamwork, and compassion” from performing. “There is a satisfaction I get from the applause of the audience that can’t be replicated anywhere else,” shared Kullmann. Students who participate in performing arts “learn to see someone else’s art and emulate it.” Hopefully the finished product is what the composer, writer or artist intended.(Linda Kullmann, at right, directs a performer in preparation for a production.)

Kullmann’s performing arts class is currently part of the 6th grade “wheel” elective. Students spend 9 weeks in four different courses over the span of the school year (Digital media, life skills, exploring technology, performing arts). There is a yearlong performing arts elective open to 7th and 8th graders which focuses on drama and dance, and also produces a play for each semester. This year they performed Fifteen Reasons Not to be in a Play for family and friends first semester and will be presenting Folk Tales from Around the World second semester. The students are hoping to share that play at Village and Strand Elementary schools. 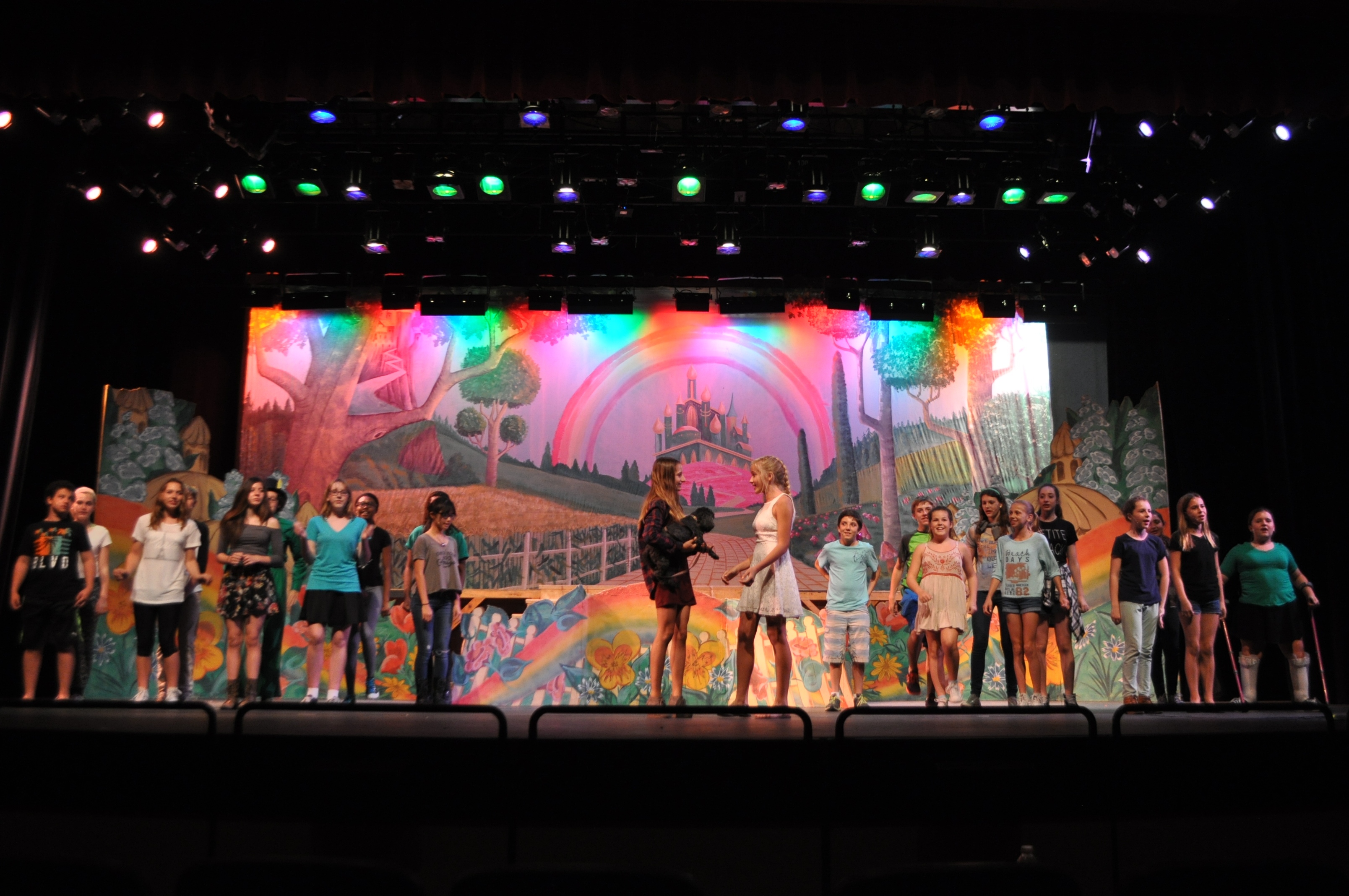 The cast of the CMS production of The Wizard of Oz rehearses at the CHS Performing Arts Complex.

Come see CMS Advanced Performing Arts students in “The Wizard of Oz”, directed by Ms. Linda Kullmann. Author L. Frank Baum penned the story right here in Coronado! Follow the magical journey of Dorothy Gale (Angelina Frances) as a tornado in Kansas carries her to the colorful land of Munchkins. She encounters many friends, including Glinda (Grace Costello), the Scarecrow (Emily Shapiro), The Tinman (Brayden Austin) and the Cowardly Lion (Justin Stella). The jealous Wicked Witch (Simone Ward) causes lots of trouble for Dorothy and her friends who travel to the Emerald City to talk with the Wizard of Oz, played by Coronado Middle School Science teacher Kevin Paiz-Ramirez. Familiar songs such as “We’re Off to See the Wizard” and “Somewhere Over the Rainbow” will remind us that if we click our heels three times, we will discover “there’s no place like home.”

Tickets are currently on sale in the middle school front office for $10.

When choosing the plays, Kullmann examines the talent for the upcoming year and compares that to script availability. Performing The Wizard of Oz made sense because the Coronado Island Film Festival, in conjunction with the Cultural Arts Commission, just sponsored “Oz Con” this past summer, the story was written here in Coronado and, said Kullmann, “I feel my students and I identify with the Emerald City concept.” 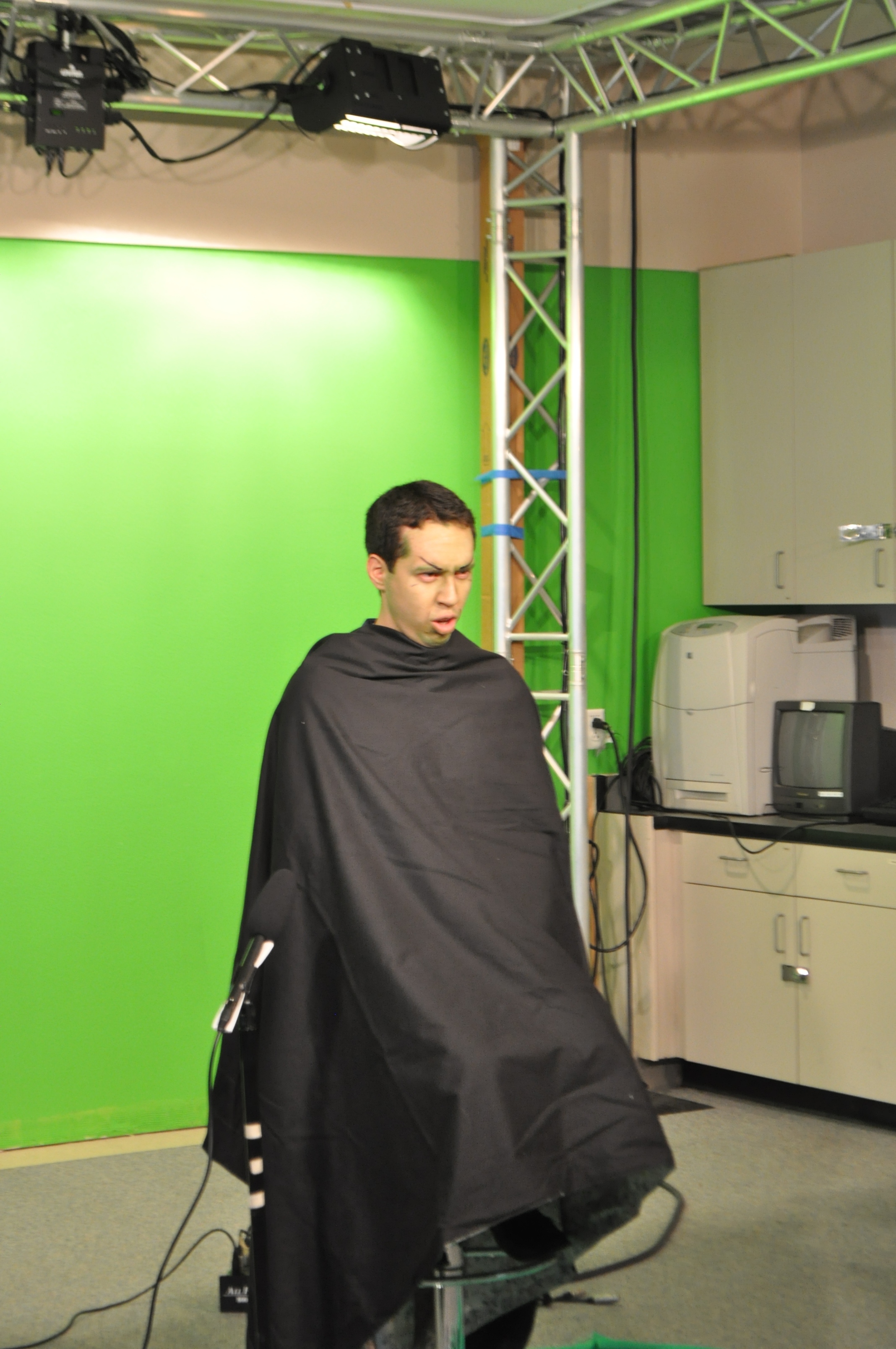 Kullmann always tries to include a staff member in the APA productions. Last year she had a part in the production of “Annie,” as did CMS Principal Dr. Jay Marquand and Assistant Principal Karin Mellina. This year the highly popular Mr. Ramirez will be playing a part in the production. The addition of a staff member to the cast allows the students and staff to work together in a completely different environment and witness each other in a different aspect of their lives. Mr. Ramirez, for his part, confesses he is learning to do something he’s never done. (At right, filming in the KCMS studio for The Wizard of Oz.)

The Wizard of Oz features 29 students (and Mr. Ramirez). There are about ten technical theatre students from COSA who provide the support needed for lighting, sound and other stage logistics. They are knowledgeable and patient when working with the middle school students.

The cast has been preparing for two months, during which time they learned a great deal about the process of putting on a production. According to Miss Kullmann, “the learning really happens in those two months leading up to the curtain rising. That’s where the magic happens. The preparation is the purpose of any kind of performance, learning all the different steps and putting it all together, learning to communicate with the audience.” This year’s play adds a brand new element for the students learn about  working with a live animal. There will be two different dogs playing the part of Toto. This addition will add another challenge for the participants. 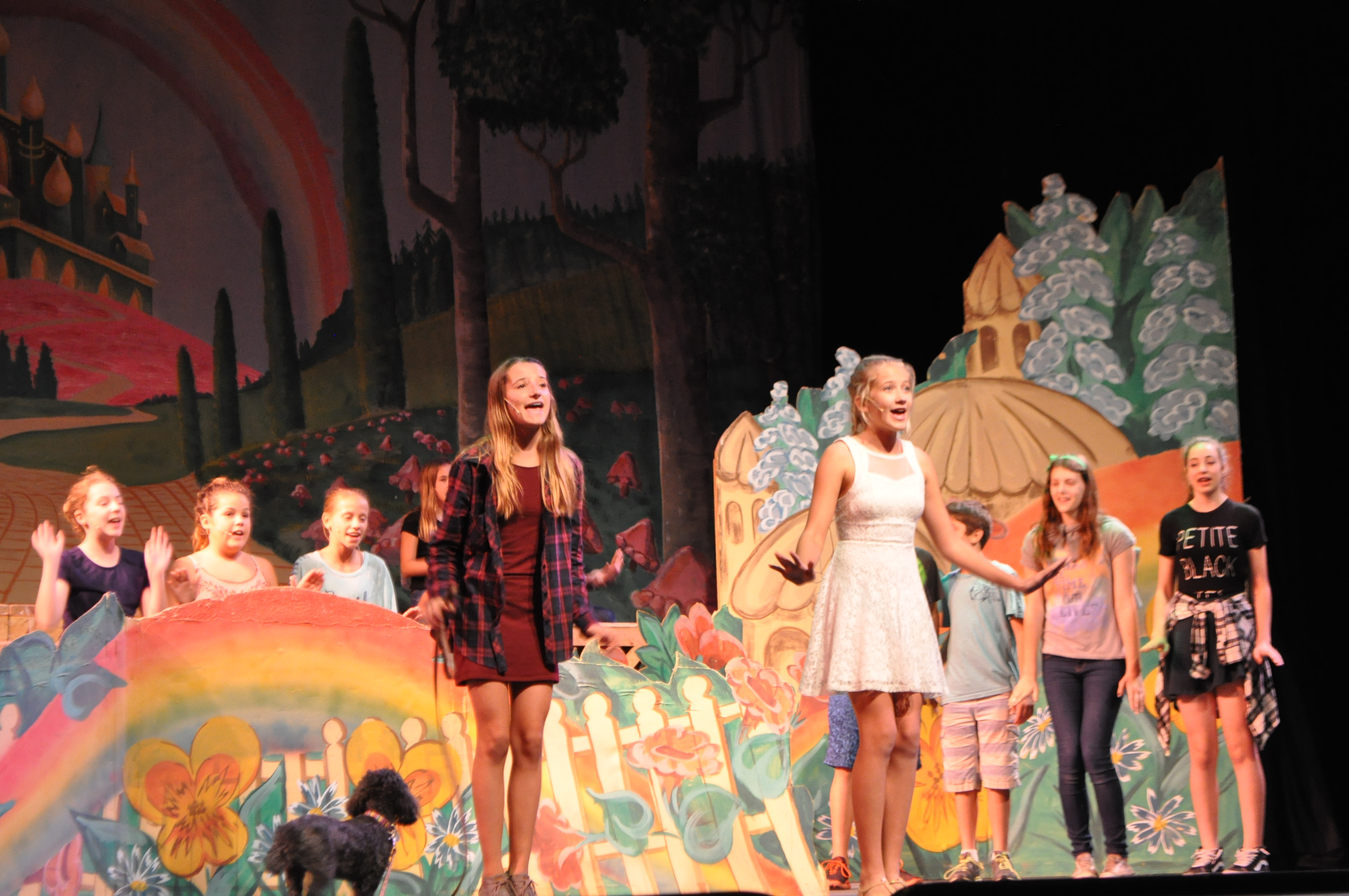 Cast members Angelina Frances and Grace Costello, with others, rehearse for The Wizard of Oz

An experience with middle school performing arts can open up myriad opportunities for students as they move onto high school. CHS has a choir, and there is also the possibility of COSA. Some students decide not to apply for COSA initially and then change their minds. Ms. Kullmann noted that with CMS performing arts, “I plant the seed and help them develop their passions. Maybe it takes time for the passion to develop, but often CMS PA is what ignited the spark.”

A couple years ago, Ms. Kullmann realized “there was a need for to start performing [herself] again.” She contacted the National Comedy Theatre and worked with their artistic director, Gary Kramer. She has presented workshops for teachers in San Diego and has performed with the National Comedy Theatre. She also landed a part at the Coronado Playhouse in “Mistletoe, Music and Mayhem”. She explained, “It was a cast of five and included various scenes of holiday situations with a comedic twist. It challenged me, big time.” 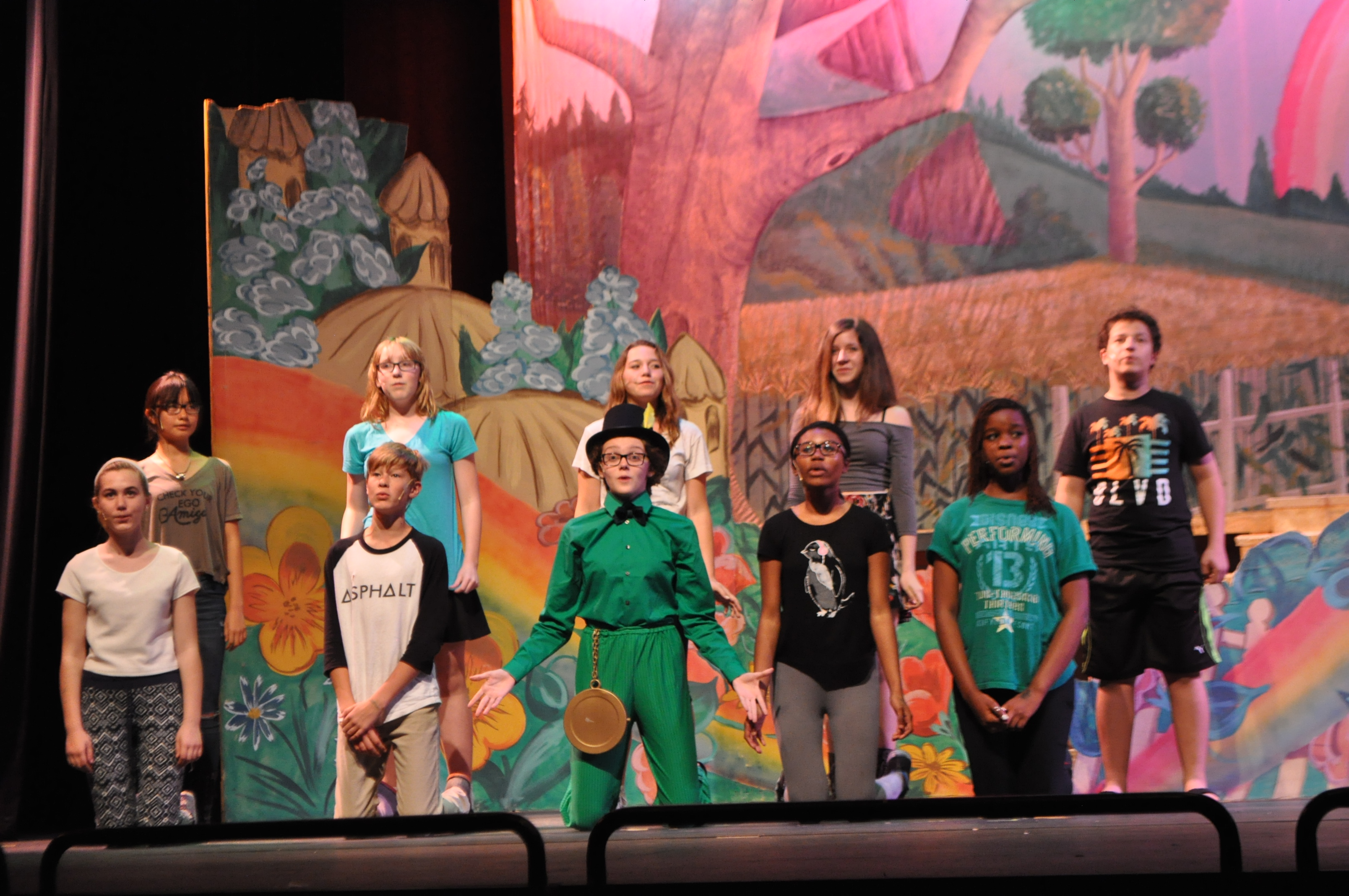 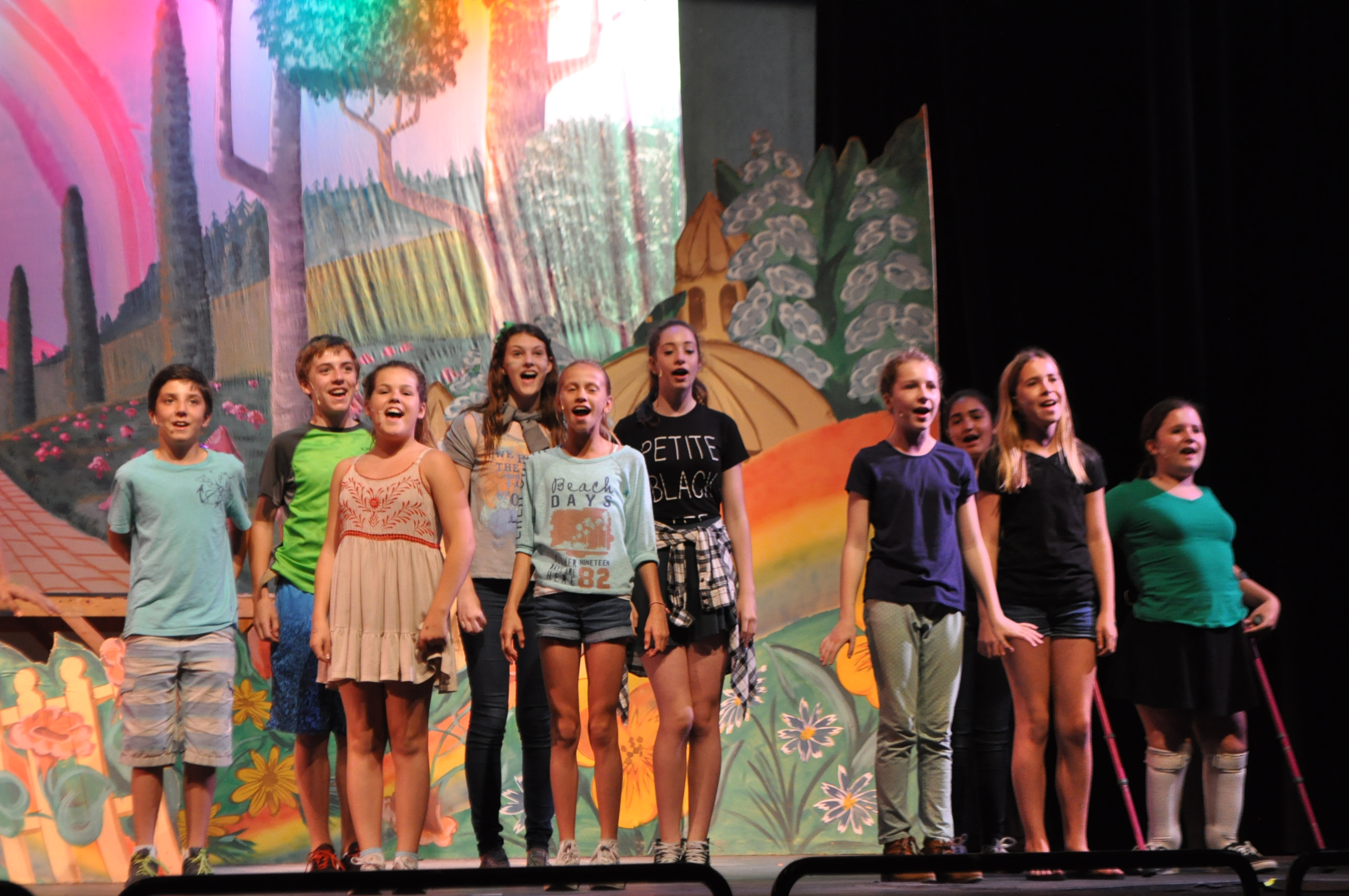 Ms. Kullmann believes that performing again has helped her teach differently. The process is more fresh in her mind; auditions, the call backs, the nerves, learning lines and dance steps and music. She continues to teach after twenty years because, she said, “It’s my passion! It is something that feeds my soul and helps me make sense of the world. I don’t feel like I am working. I feel like I get a chance to play and feel young at heart again.”

Update from CUSD on reopening of on-campus learning: Thank you for your continued understanding and adaptability as we respond to ongoing changes which impact our...
Read more
Education

The Governing Board of the Coronado Unified School District met via Zoom on Thursday, January 21, for their first official meeting of 2021. The...
Read more
People

Everyone is invited to Movie Night at CHS, sponsored by the Class of 2018. The event will feature the Disney classic...
Read more

The Coronado High School Class of 2018 is sponsoring a special pizza night event to help raise funds for their class. ...
Read more

Annual CSF Telethon to be held Thursday; Tent City Activities to return to the quad during the broadcast

LIVE Telethon in the CHS Performing Arts Center Produced BY students FOR students! Under the direction of Amy Steward and Tony Perri, whose...
Read more

Congratulations to the Coronado High School Mens Soccer team who've been seeded #1 in their regional division! They will be hosting...
Read more

All Coronado military spouses are invited to attend the next military spouse gathering offered by the Military Family Life Counselors. The motto...
Read more