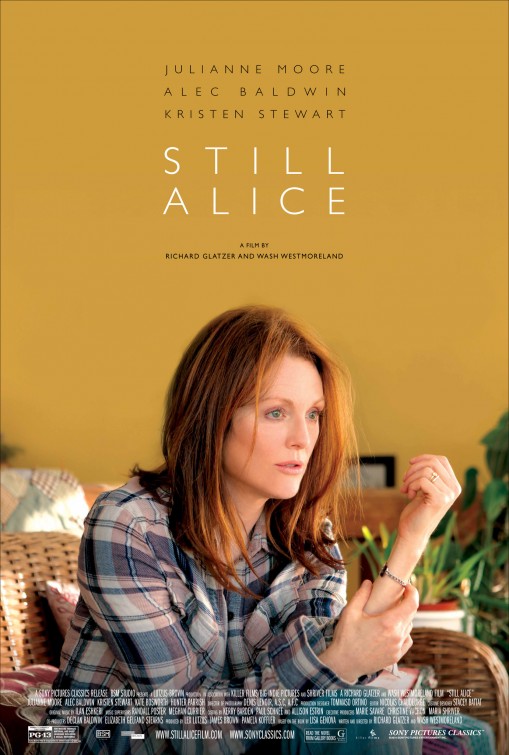 Still Alice is the story of Dr. Alice Howland, played by Julianne Moore, who is, at the age of 50, diagnosed with early-onset Alzheimer’s disease. An ironic twist of fate for the highly educated and extremely intelligent linguistics professor at New York’s Columbia University, her diagnosis turns her life on a dime as she begins to quickly struggle with simple everyday tasks while the disease takes over her mind and her life.

For Alice, it starts simply with failing to remember a few words during her class lectures and other speaking engagements. Soon she finds herself lost on the once familiar campus of Columbia University where she teaches. She begins seeing a neurologist in secret, not wanting to let her family know what is happening until she has more answers. Upon learning her doctor suspects early-onset Alzheimer’s, she shares the shocking information with her husband, Dr. John Howland (Alec Baldwin) during an emotional scene in which she expresses her horror and fear of the direction her life will soon take.

As the Alzheimer’s settles in, Alice slowly disappears in front of her family. Once vibrant, confident and quick-witted, she becomes a shell of who she once was, unable to remember people and places or complete everyday tasks. She loses her phone for over a month, a crushing blow as she relies on it to help store information to help her navigate through her diminished cognitive state. She becomes unable to tie her shoes or even find her way through her own home. Her relationships with her family become strained, naturally, as they struggle to understand and accept what is happening, most of all her husband, who suggests they relocate to Minnesota for a new career opportunity for him. In a tender scene with her youngest daughter Lydia (Kristen Stewart), Alice speaks of her love of butterflies, explaining that like them, her life will be fleeting.

Based on the novel by Lisa Genova, Still Alice is a grueling glimpse of the cruelty of Alzheimer’s disease, a disease that shows no mercy for those who are affected by it. Julianne Moore gives a gripping performance, earning herself her first Oscar for Best Actress at the 2015 Academy Awards. While Moore’s acting was real, emotional and heartfelt, the other performances by her cast mates paled a bit in comparison. Baldwin, who played Alice’s husband, seemed flat and distant, perhaps in conjunction with the way his character was feeling as he watched his wife vanish in front of his eyes while tried to hold on to all that once was. Moviegoer Shelley states,”I think it’s a movie that everyone should see. This hits home for me but it brings a lot of awareness to Alzheimer’s which I think is important.”

Viewers are taken on an emotional journey with Alice as she navigates her way through her disease, and while the film does a great job of showing the torments of Alzheimer’s from multiple perspectives, they are still left wanting more, especially upon the film’s rather abrupt ending that begs the question “What happened next?”

In the film, during an emotional speech before the New York Chapter of the Alzheimer’s Association, Alice states that her memories are her most precious possessions. As they are slowly being ripped away, one thing remains – love – proving that in the end, nothing is ever really lost.