Community Voices: This is Not a Historic Coronado Trolley 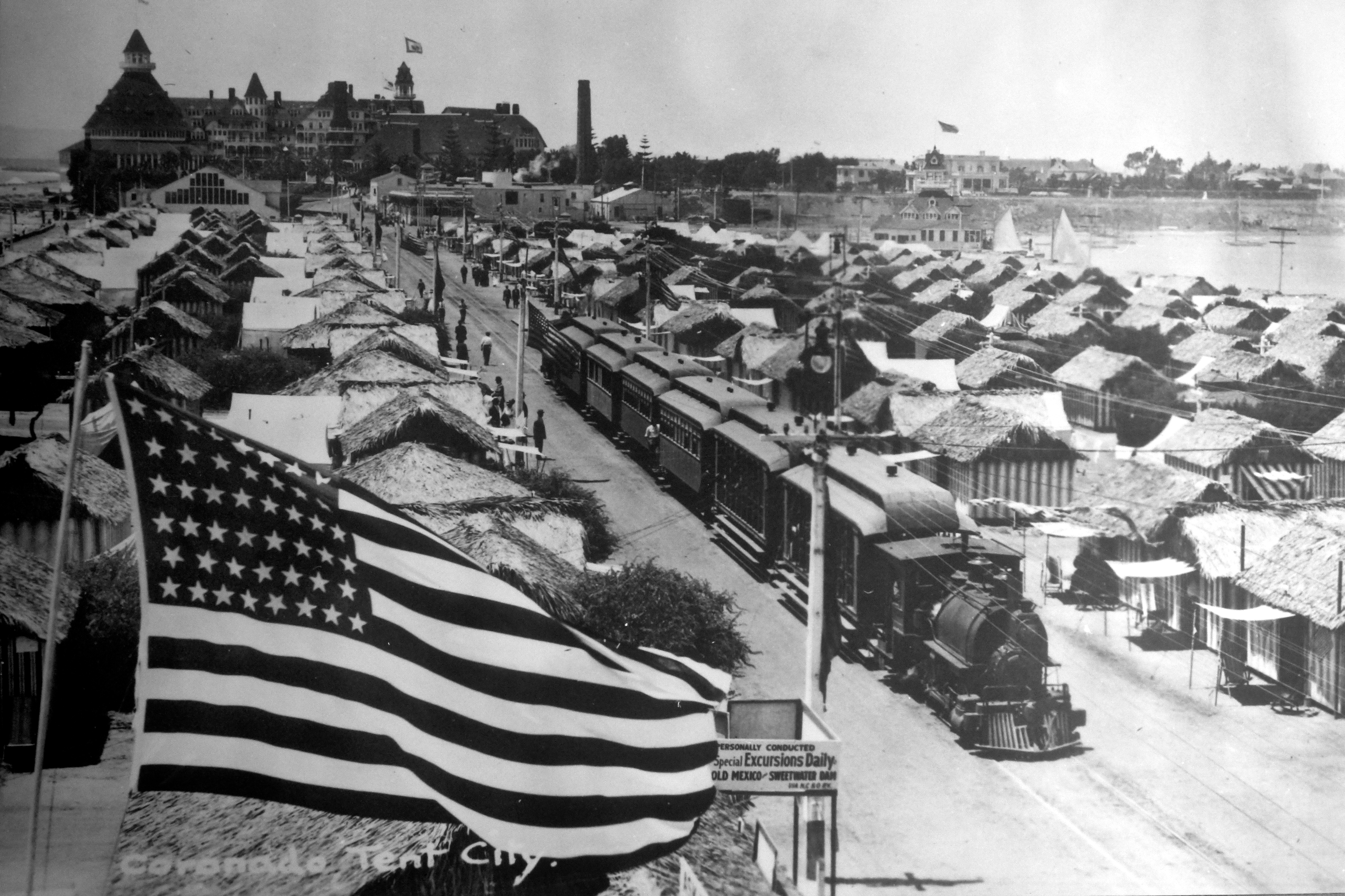 The City Council is being asked to restore a railroad car from National City, and one that rarely came to Coronado at that. The railroad car has been billed as a “historic Coronado trolley,” but no authentication has been provided.

2. This was a special charter for a bullfight in Tia Juana, or possibly a charter for a National City Sunday School picnic held in Tent City.

3. The train never provided schedule service to Coronado and its presence in Coronado was rare occurrence.

Some think that it is a historic Coronado railcar carrying a group of Tent City vacationers on a daily excursion to Mexico. That is because of the sign advertising “Excursions Daily – Old Mexico – Sweetwater Dam”. With the help of a computer close-up we can see the sign also says “VIA NC & O Ry”. 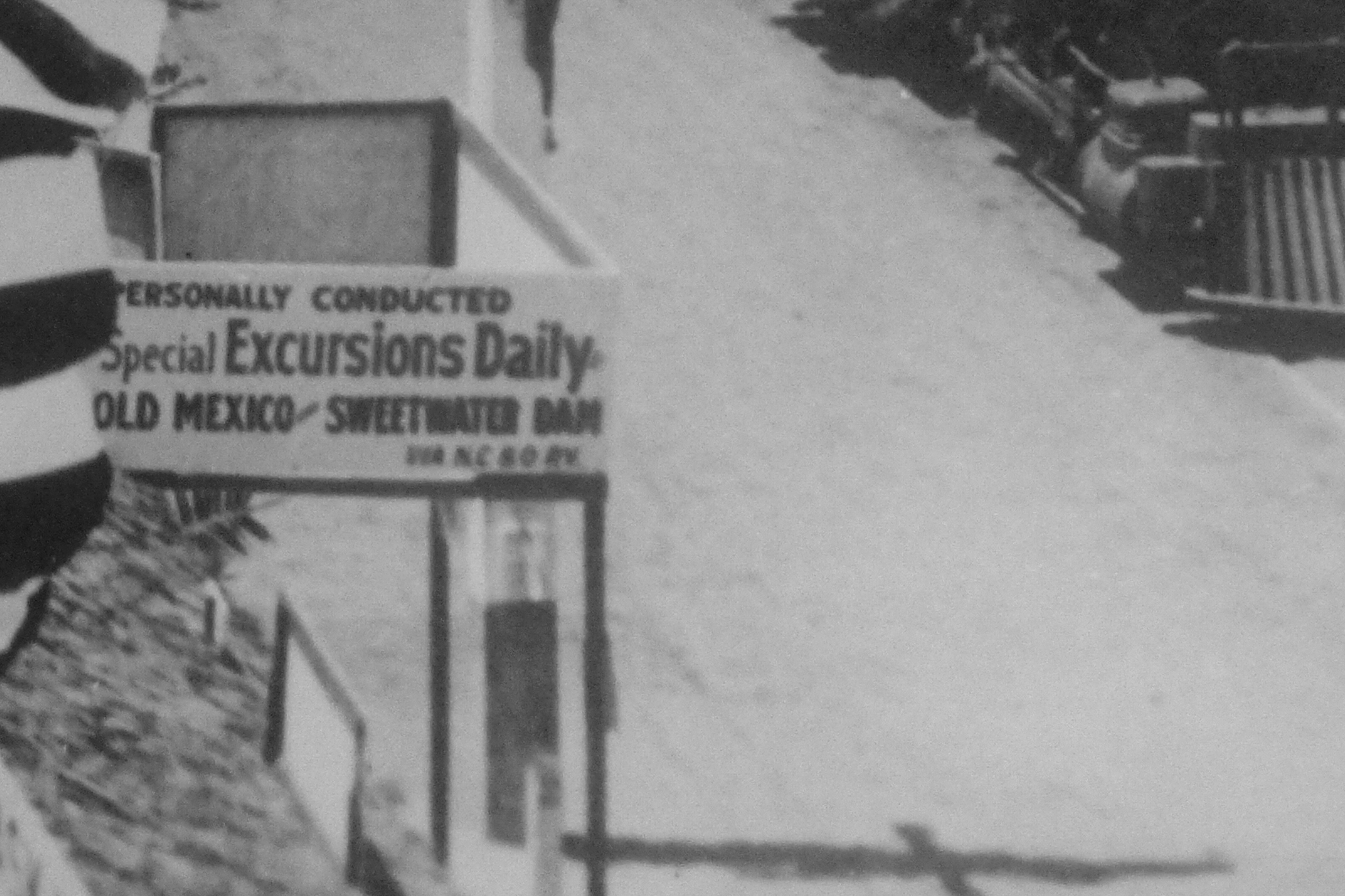 The “Tent City Daily Program” advertised and described the trip from Tent City to Tia Juana in 1903. 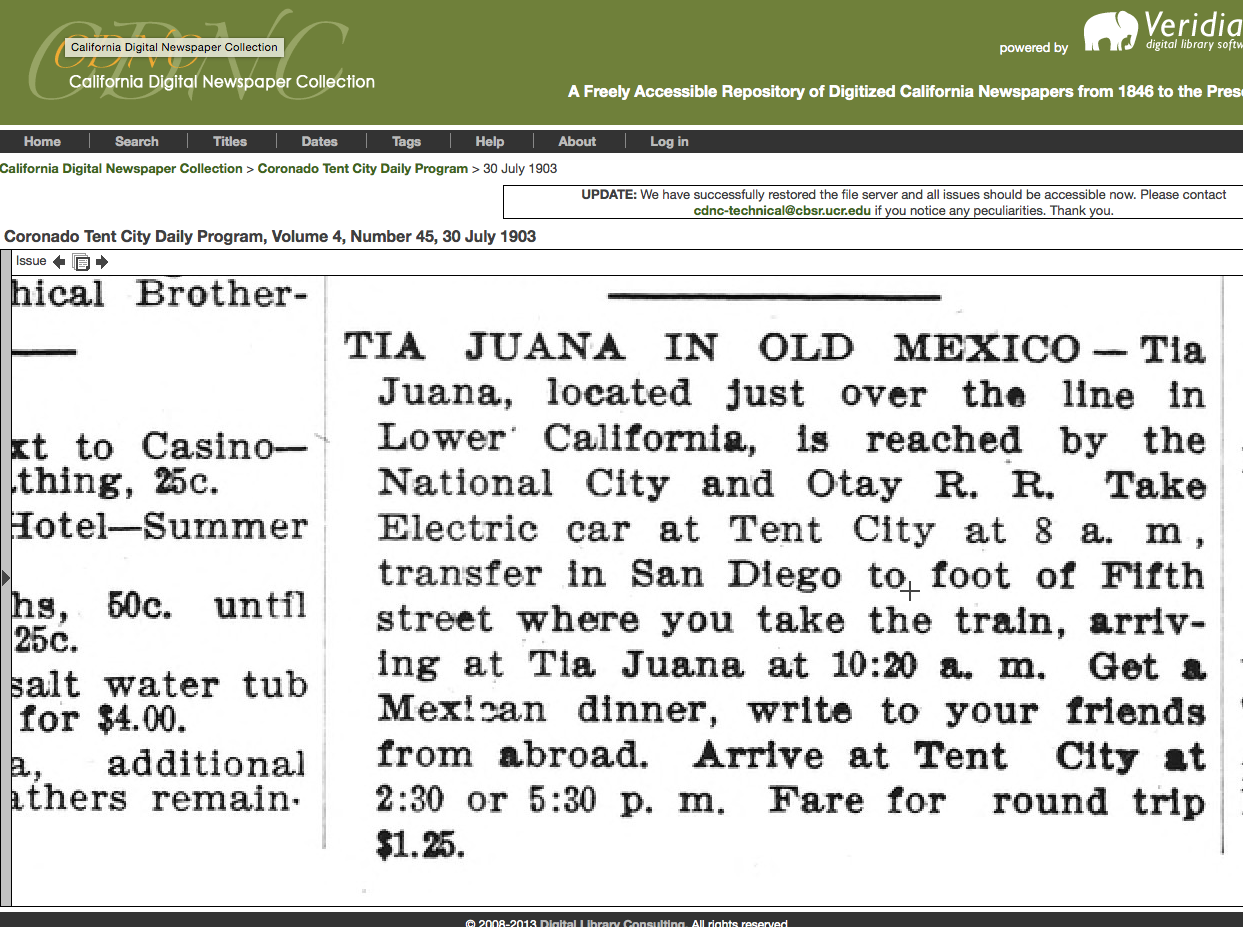 Here is part of a personal account of the trip from the “Tent City Daily Program”. 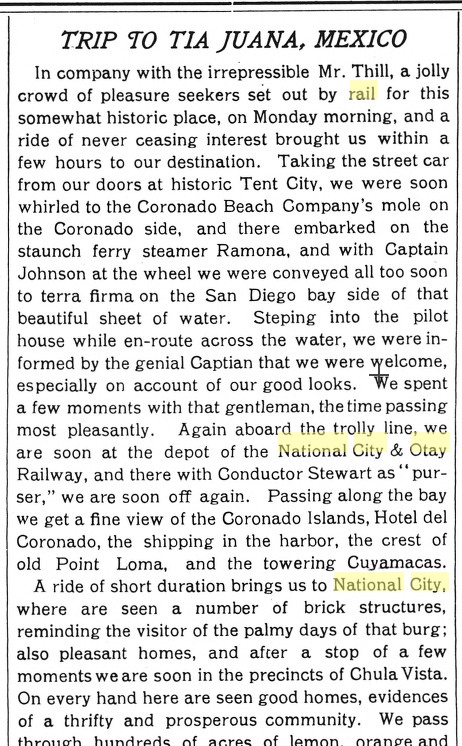 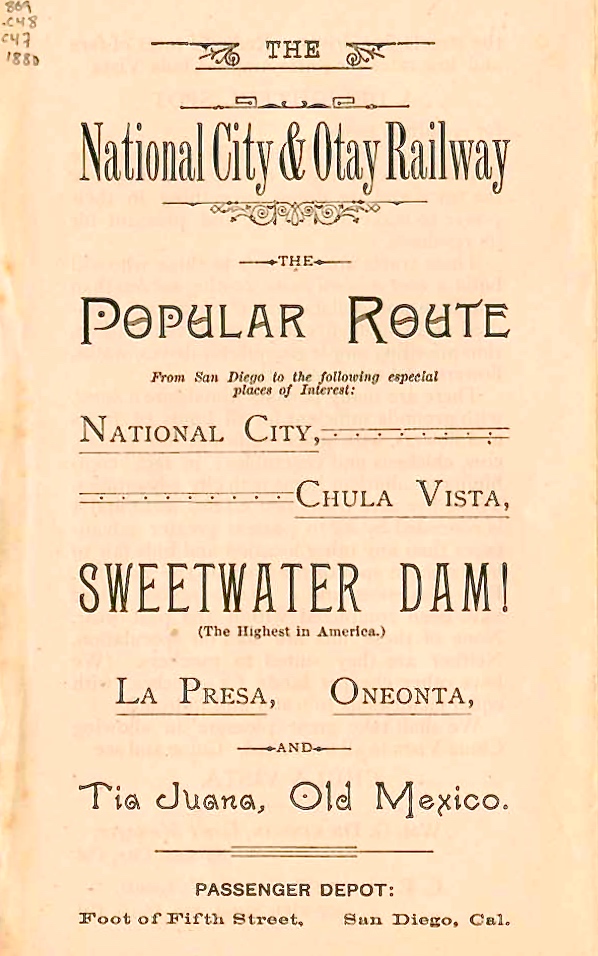 A closer look at the photo reveals “excursion” railcars #1 and #2 of the National City and Otay Railway (NC&O). These two cars are very distinctive because of their two step platforms on each side of the car.

The cars were built in 1888 and were used until they were retired in 1914 and moved to a farm in Descanso. In 1996, National City paid $4,000 for car #1 and had it restored with the assistance of the Port District. It sits today at the National City Railcar Museum. Many photos exist showing the cars in and around National City. 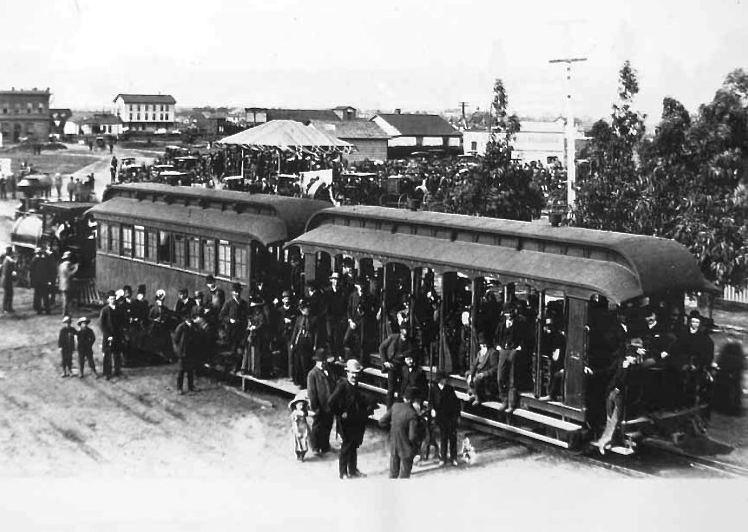 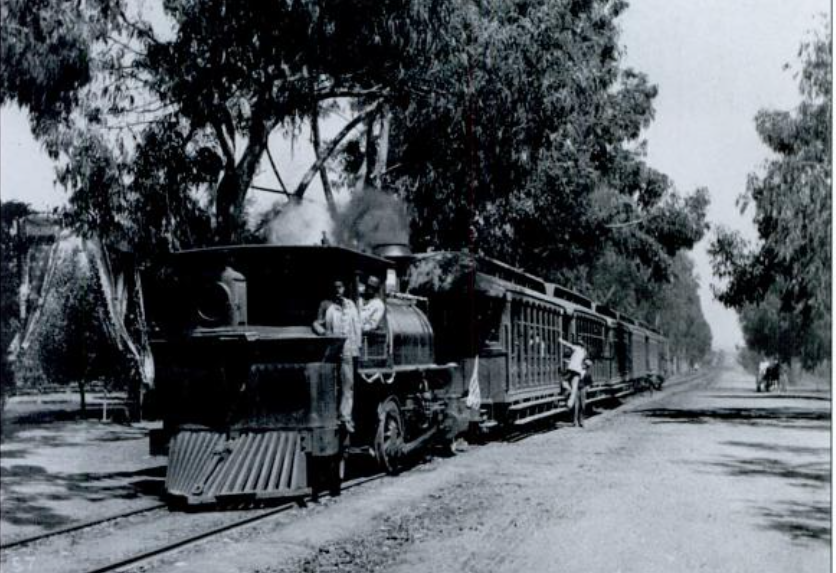 The photo on the left is of National City car #2, the car the City Council is considering for restoration. It was taken on April 19, 1888 at 23rd Street and Cleveland Avenue, during the celebration of National City’s new water system.

The picture to the right is looking eastward on 24th St and the one below is near the Sweetwater Dam. Note the two steps.

These are described in the 1887 San Diego County Directory and shown in the route map. 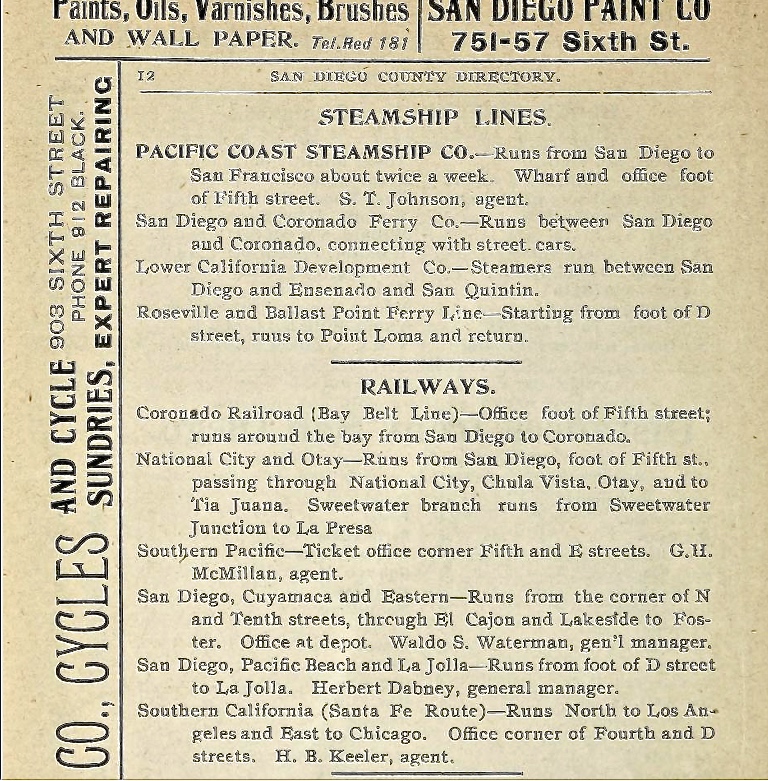 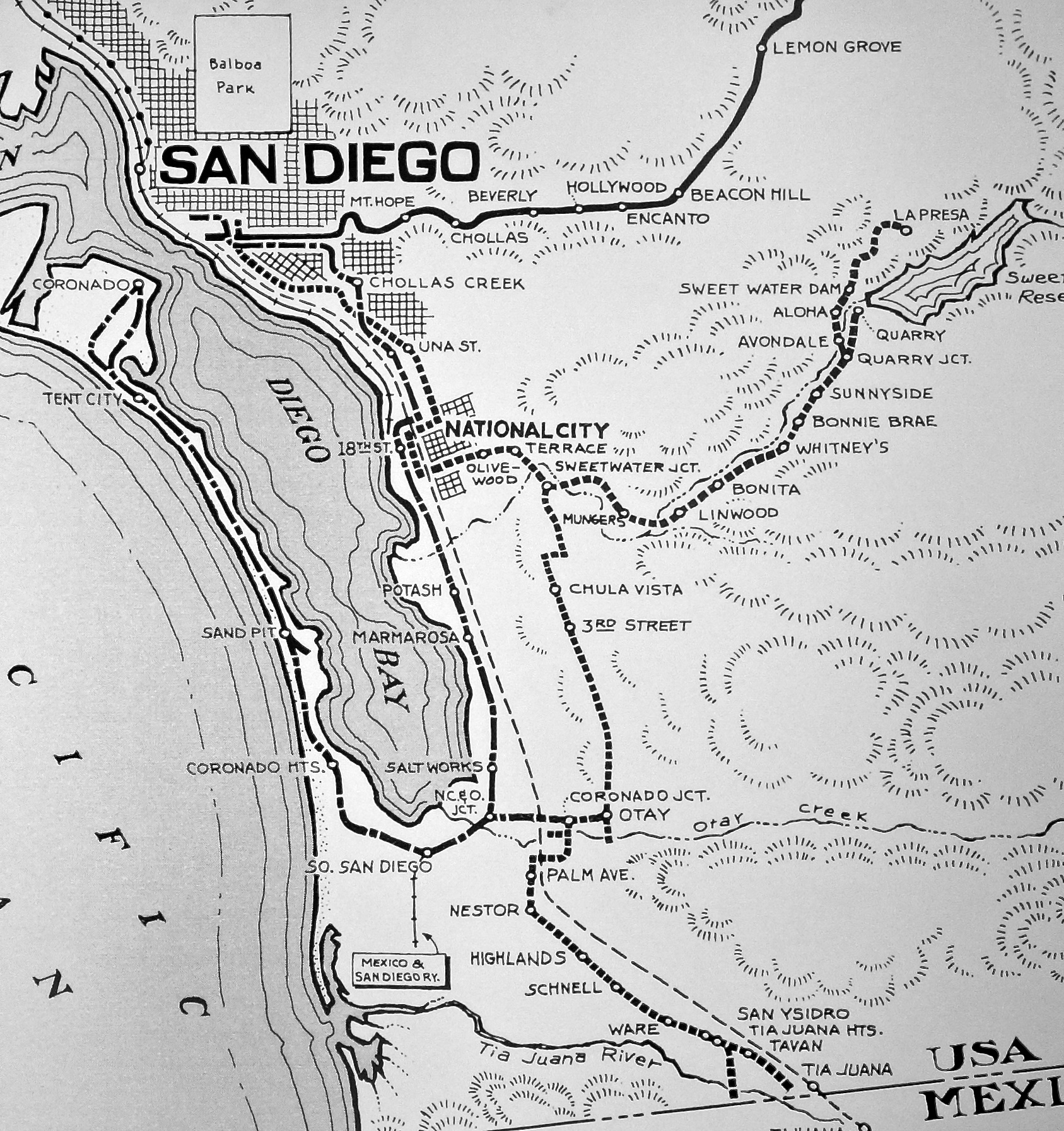 Time tables, advertised daily in the SD Union for the NC&O, list trips daily to Tia Juana but never to Coronado. 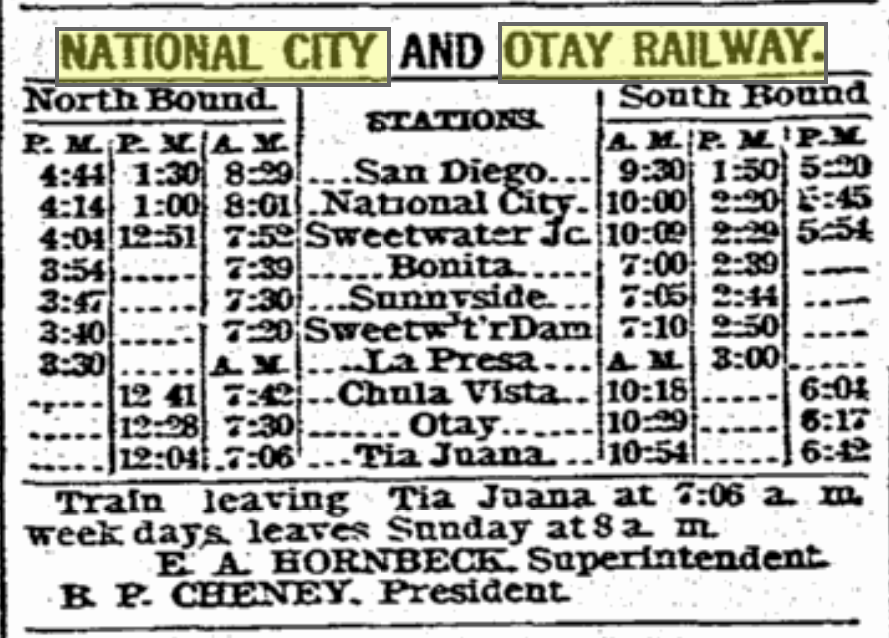 So when was Tent City photo taken? Enlarging the horizon of the photo shows the Spreckels Glorietta Bay home behind the boathouse. The SD Union said the house was to be built during 1907-1908. 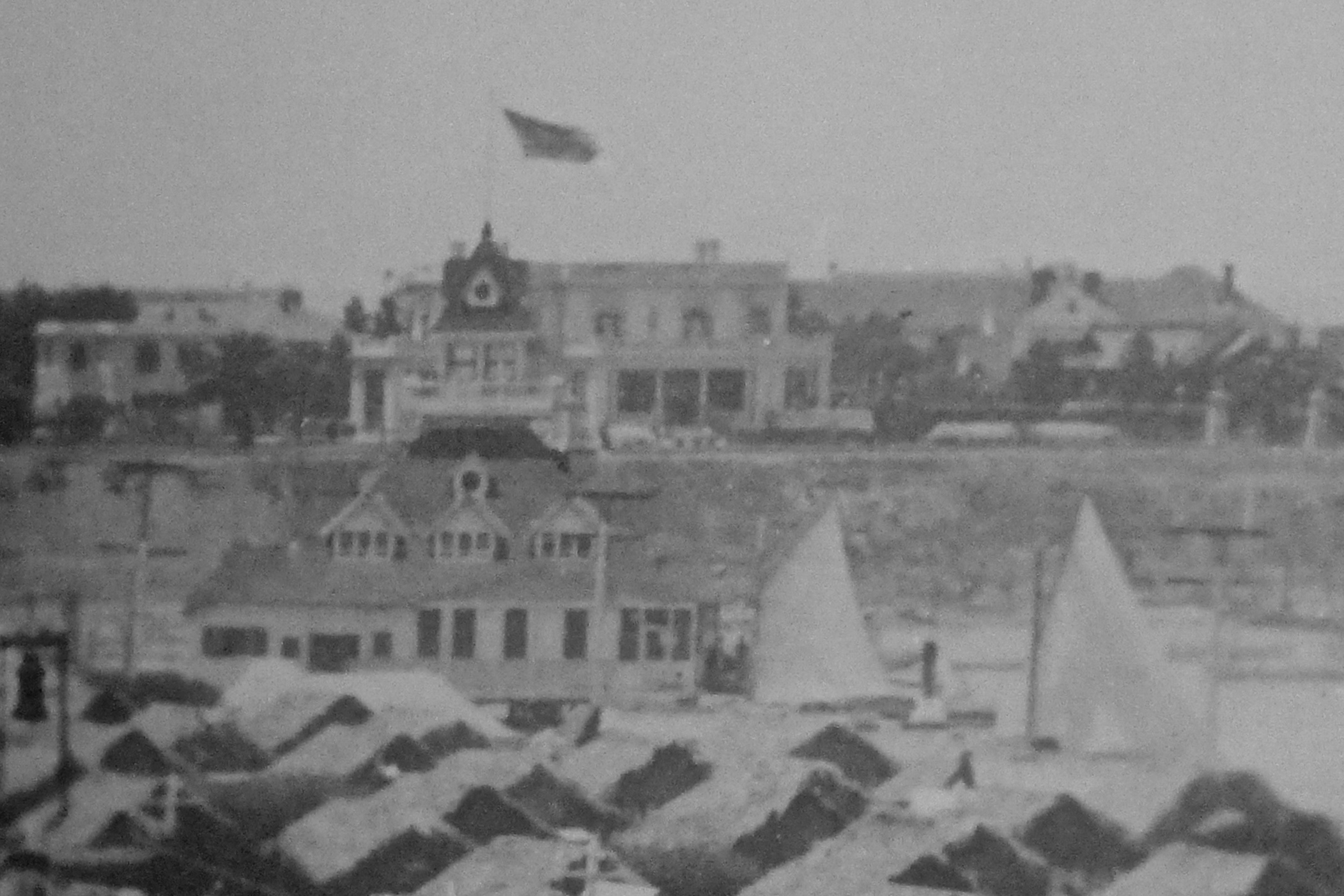 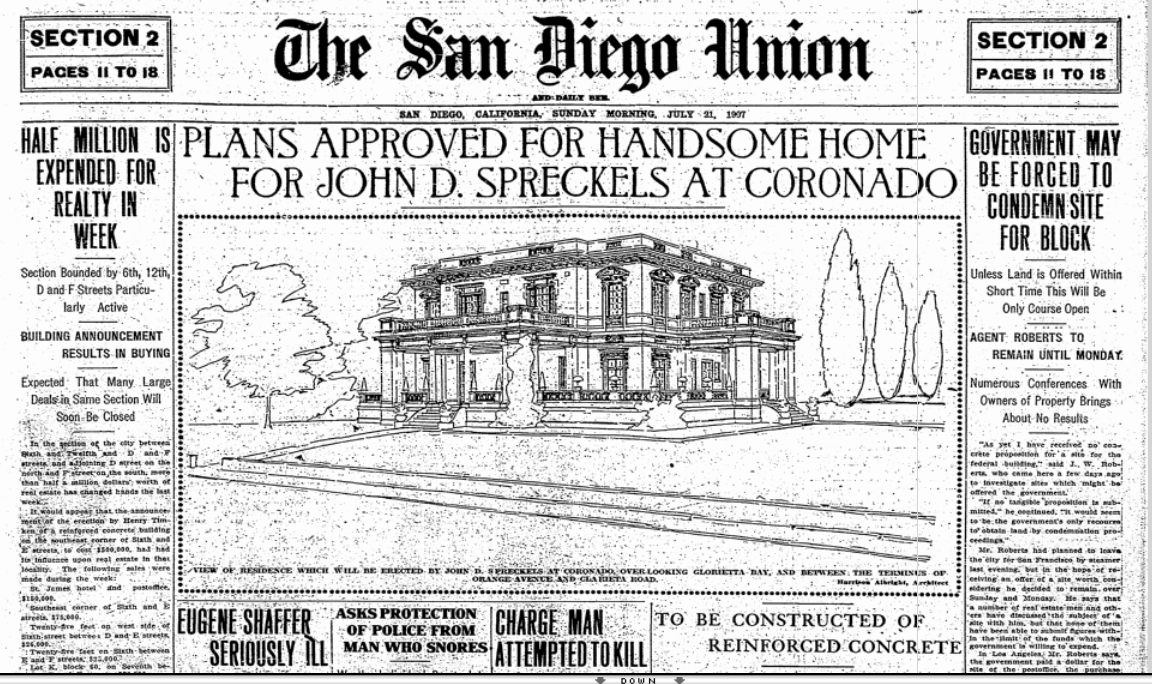 On July 1, 1908, the Coronado Railroad and the NC&O were merged into the San Diego Southern Railroad and from that time on, it is impossible to tell from newspaper stories about special “excursion trains,” whether the cars were from the original Coronado RR or the NC&O Ry.

However, news stories from the time indicate that the trip around the bay and up the Strand was a very unusual event.

The SD Union from 6/14/1910 mentions that the San Diego Southern RR will run a special train for the University Club of LA from Tent City to the bullfights in Tia Juana, if they are assured of a minimum of 200 passengers from the trip. The article goes on to say –

“As the peninsula trip is a particularly delightful one and the opportunity of making it occurs, but seldom, many San Diegans will probably cross the bay and visit Tia Juana next Sunday by this route.” 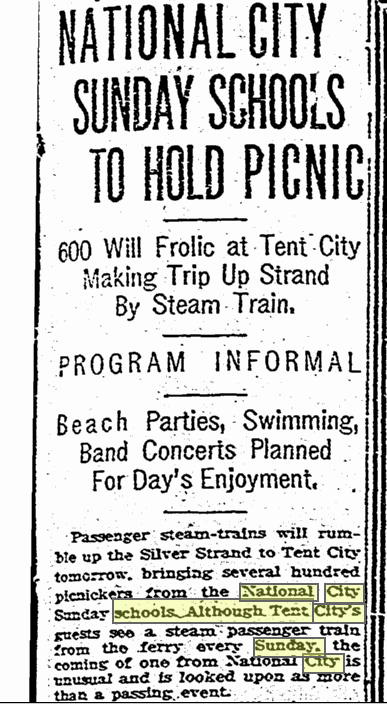 The SD Union on 8/27/1914 describes a special train for the National City Sunday Schools’ picnic. The article states –

“Although Tent City guests see a steam train every Sunday, the coming of one from National City is unusual and is looked upon as more than a passing event.”

“. . . of late the “tide-water” track has not been used for passenger service, and and many of Tent City’s guests last night were surprised to learn that Tent City had direct rail communication with the mainland.”

This 9/01/1914 Time Table from the dispatcher’s notes during the peak of Tent City, shows the number of trains Northbound and Southbound. 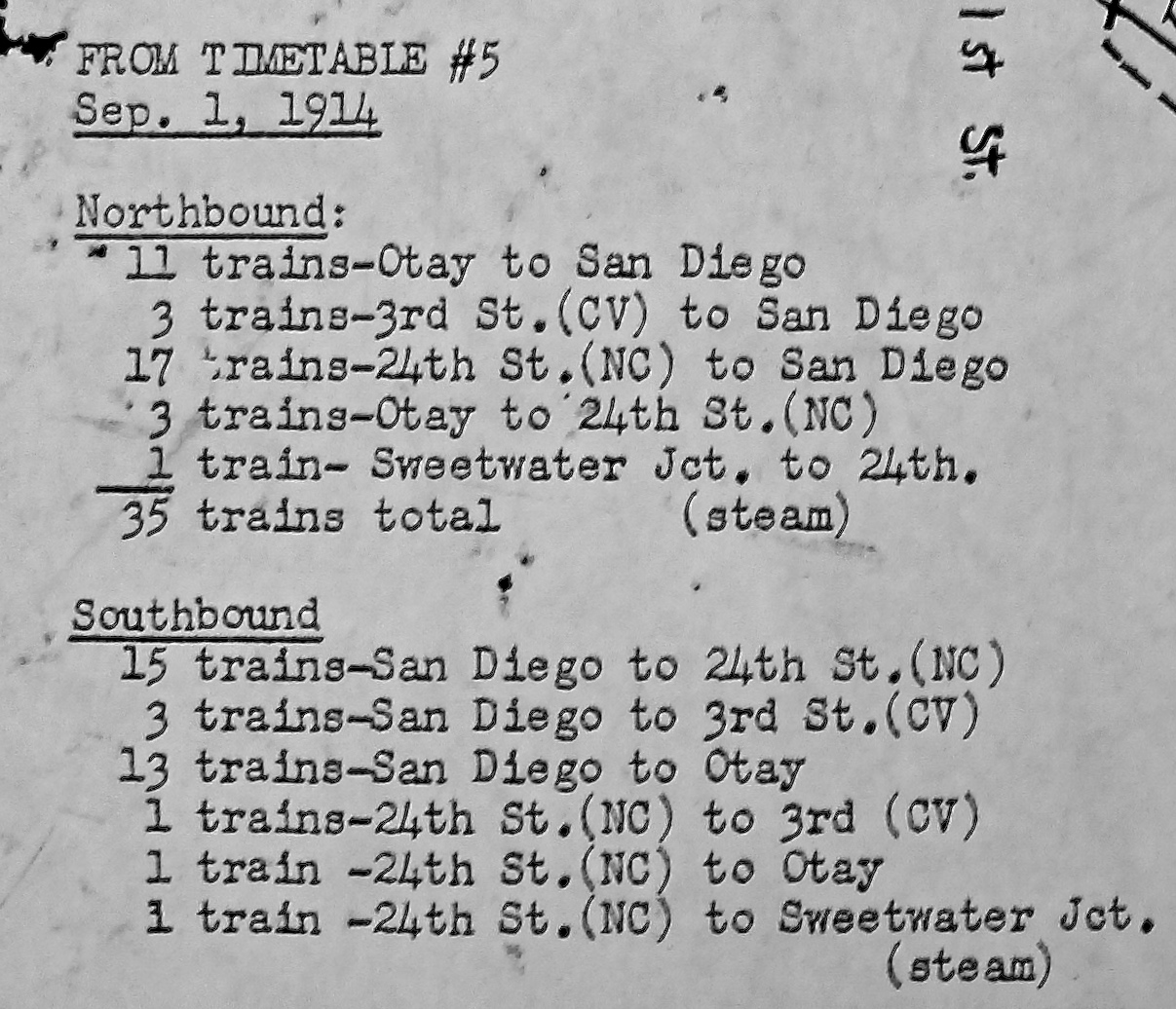 A total of 28 trains were scheduled to or from Otay (Tia Juana) – but not a single one to Coronado. 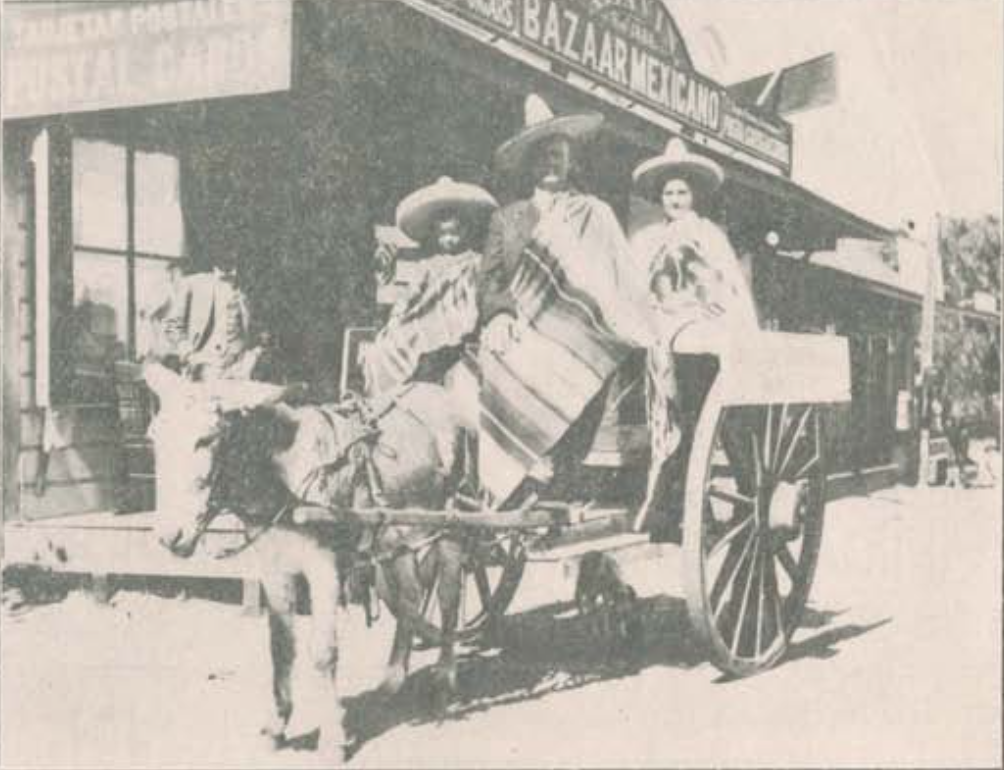 If you would like to expand on or verify my research, watch the 1- minute video which shows how you can access the Historical Union-Tribune Online.

https://youtu.be/w0wptnFogSoThe three-day Fourth of July holiday weekend is here. Find out what City facilities are open and read a list of Fourth of July...
Read more
City of Coronado

In January 2020, the San Diego Association of Governments distributed its allocation of planned housing units under the regional housing needs allocation (RHNA) to...
Read more
City of Coronado

Historical San Diego Union and Tribune newspapers are available online from the Coronado Public Library. They can be word-searched, which makes it easy to...
Read more
Video

Should a railcar from the National City & Otay Railway be restored and placed in a Coronado park or Orange Avenue median?
Read more
Video

ZINIO 1. Register for a Zinio account at http://www.coronado.ca.us/library/ You will need your library number. 2. Choose your magazines. 3. Download...
Read more

I took this shot this earlier this morning.
Read more