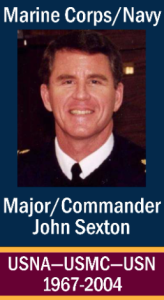 John Sexton spent 37 years in a Naval uniform achieving the rank of major in the U.S. Marine Corps and commander in the Navy. He enlisted in the Navy in 1967 to attend the Naval Academy Prep School before attending and graduating from Annapolis in 1972.

Major Sexton served in all three combat arms as a Marine Corps officer from 1972 until 1983. He commanded two artillery batteries and an infantry company before serving as a tank battalion fire support coordinator. He earned a master’s degree in counseling psychology from the University of Northern Colorado, and a master’s degree and a PhD in clinical psychology from the California School of Professional Psychology.

He became a Navy clinical psychologist in 1983 and served in varied assignments around the world. CDR Sexton was one of the first graduates of the Congressionally mandated Department of Defense Psychopharmacology Demonstration Project, in which he completed approximately 75% of the medical school courses at the Uniformed Services University School of Medicine, followed by a one-year residency at Walter Reed Army Medical
Center, both in Bethesda, Maryland. He was assigned to Naval Medical Center, Portsmouth, Virginia; and in February 1995, became the nation’s first independent practitioner prescribing psychologist. He continued to serve as a prescribing psychologist with tours at Naval Hospital Camp Pendleton in Oceanside, California, and Naval Medical Center, San Diego.

CDR Sexton made more than 80 national and state-level presentations to psychological associations and state legislators and was featured in nationally broadcast radio and television programs. In addition to his many military awards, CDR Sexton received two American Psychological Association Presidential citations.

He retired after nearly 32 years of service as a Naval officer and then served as a staff psychologist at the Counseling and Psychological Services of the University of California, San Diego, where he co-founded the San Diego Chapter of the American Foundation for Suicide Prevention. In addition to his national impact on psychology and suicide prevention, Dr. Sexton helped our community by serving for a dozen years on the Coronado SAFE board of directors.