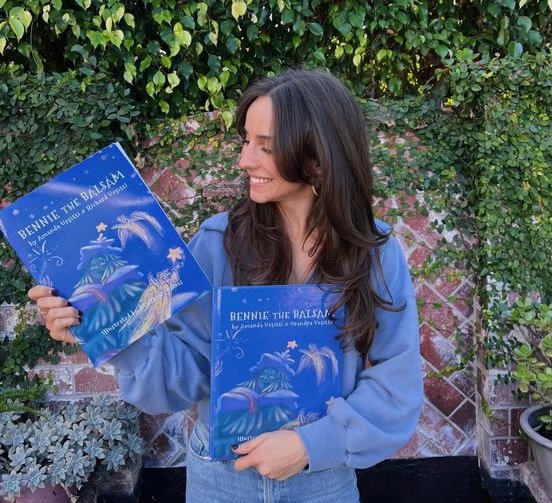 This book tells the charming tale of Bennie, the very first Christmas tree, and how he came to be. Encapsulating the joy of the Christmas season, “Bennie The Balsam” shines a bit of starlight onto the real reason we put a star on top of our beautiful Christmas tree. May this book bring extra love and belief into your holiday season.

Coronado local Amanda Ursitti has self published “Bennie the Balsam,” a joyous tale about the first ever Christmas tree, to encompass the reason for the season.

Five years ago, her grandfather was on his way to a Christmas party. Practically scribbled on a napkin, he wrote a poem. The heartwarming tale has been a special piece for the Ursitti’s family and friends, so Amanda was inspired to expand the story as a gift for him.

The holiday idea ignited for her around August. She rewrote the poem to get a better grasp on how she could adapt the story from its original roots and the ball started rolling. The character was created by her grandfather and she developed the story behind the cherished balsam. Amanda shared that a large portion of the book was written during a family vacation to Lake Tahoe.

She later connected with illustrator Matthew Macais, who is a family friend from Orange County, to work together on the project. She shared how Matthew was super passionate, because he was previously familiar with the poem so many years ago. He even had sketched scenes before he was approached with the idea. Amanda expressed that it was a great experience to “learn together,” as a new author.

When asked about the writing process, she shared that it took a lot of rewrites. She would find inspiration from songs for words that rhymed in order to create the meter. Trial and error was a common theme being self taught, however she overcame it by researching and reaching out to other self publishers. Amanda explained, “The writing community was very supportive and welcoming.” By October the book was published.

Excitingly exceeding expectations, “Bennie the Balsam” has been well received with 200 copies sold so far. Amanda weaves her story parallel to the first Christmas to shine a light on the joy of the season, which she hopes to share with children everywhere.

Amanda graduated from Coronado High School in 2017 and has recently graduated from USC in 2021 earning a film and television production degree. As a script writer, she loves the art of storytelling and is excited about publishing more children’s books. Babysitting in high school sparked an appreciation for kids’ bedtime stories, which is the whimsical feeling she desires to create on the pages she writes.

“Bennie the Balsam” is available online at Barnes & Noble and Amazon.