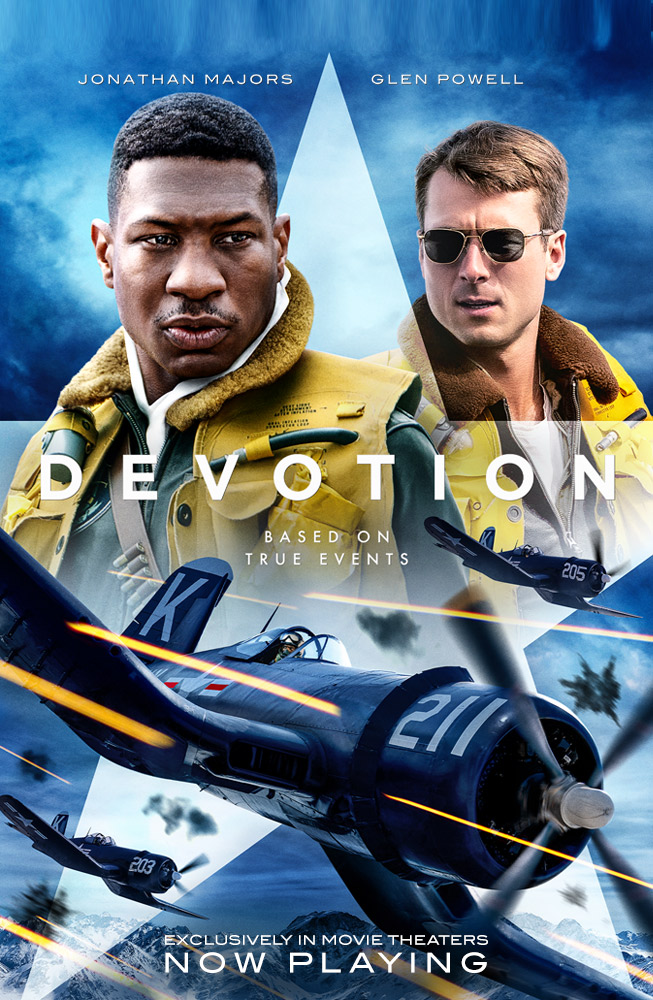 Director J.D. Dillard takes movie goers on an emotional ride through the true story of wingmen Jesse Brown and Tom Hudner. “Devotion” illustrates the pages of the bestselling book by Adam Makos to uncover the history of Jesse, the first black Navy aviator, during the Korean war.

It is 1948, three years after WWII when the camera reveals Tom Hudner, played by Glen Powell, entering the locker room at the Naval Air Station Pensacola. As he is settling in, a growing voice travels across the seemingly vacant space. Jesse Brown, played by Jonathan Majors, appears around the corner. The screen exposes Hudner’s charismatic formality contrasting with the reserved man in front of him. They are consequently paired up during training, and their barrier of two different worlds begins to break.

The audience is further introduced to a glimpse of Jesse’s life as a husband to Daisy Brown, played by Christina Jackson, and father to their daughter. Leading up to the deployment on the USS Leyte Gulf there is much pressure and fear piloting a Vought F4U Corsair for Jesse. As the couple is enjoying the last evening together before his deployment Daisy sighs, “You’re the only person I ever met belonging in the sky. Just remember, you belong down here with us too. Okay?”

Overall, the friendship between Brown and Hudner is strengthened through revealed insecurities and past scars. It clearly illustrates that their relationship was one built on respect. Jesse‘s attitude towards race was radical, because he was determined to showcase he was simply an airman just like the rest of the men and women serving their country.  Ultimately, his character as a husband, father, friend and airman truly reflected his devotion to what he loved in life.

I had the privilege to see the movie with my grandparents. Leaving the theatre, their feedback was shared, “We really enjoyed the movie, especially since our son is a naval aviator. The friendship that evolved between Tom Hudner and Jesse Brown exemplified the best in naval camaraderie and brotherhood.”