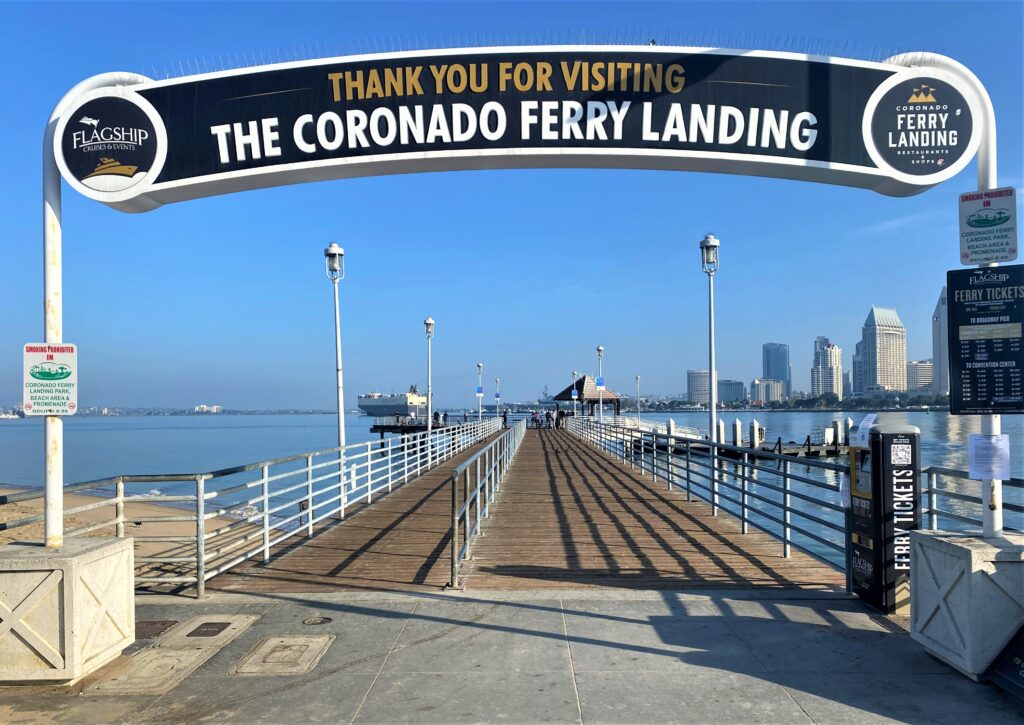 The November 1 City Council meeting focused on approving the 26 Coronado special events for the upcoming year, as well as extending the ferry service contract with Flagship Cruises and Events. City Manager Tina Friend introduced the new Director of Recreation and Golf Services Tim Farmer, who was selected after a nationwide search. He brings 25 years of experience working with parks and recreation departments for the cities of Santee, Escondido and most recently Chula Vista, for the past 19 years. Friend also congratulated city staff on receiving the 2022 Excellence in IT Practices Award from MISAC, for excellence in information technology practices. She shared that the city is continuing its advocacy in achieving solutions to the Tijuana sewage issues that affect the water quality.

City Clerk Jennifer Ekblad introduced Deputy City Clerk Kelsea Holian, who previously worked in Coronado’s recreation department before moving to Arizona, where she received her Certified Public Manager (CPM) certification from Arizona State University. She has also earned the prestigious designation of Certified Municipal Clerk and is pleased to be returning to Coronado.

City Attorney Johanna Canlas presented proposed changes to an ordinance pertaining to the qualifications of the five commissioners on the Design Review Commission (DRC).  She highlighted that the current ordinance limits the members of the DRC to three professionals in some field of design, one businessperson, and one member with qualifications established by the City Council at its discretion. These restrictions limit the pool of applicants available to apply for DRC, so the proposed changes would increase the potential applicant pool, while still maintaining a preference toward appointing certain design professionals likely to have the desired experience and background to serve as effective commissioners. The proposed amendment is: three members of the commission are preferred to be professionals in some field of design, including but not limited to architecture, landscaping, interior design, or graphic design. One member is preferred to be a businessperson owning, operating, or managing property in the city of a commercial or industrial nature. The qualifications of the remaining members of the commission shall be established by the City Council at its discretion. After discussion among the council members, Councilmember Heinze asked that the word “strongly” be removed from the wording, and with this change the new DRC ordinance was unanimously approved.

An update on the free commuter ferry services contract and Transportation Development Act (TDA) Article 8 funds was presented by Community Development Director Rich Grunow. He detailed that the free commuter ferry service began in 1993 to Broadway Pier and NASNI, and that the NASNI route stopped in 2010, and was originally funded with bridge tolls with TDA Article 8 funding since fiscal year 1999/2000. The most recent three-year contract with Flagship Cruises and Events started in 2019 and expired on September 30, 2022. The commuter ferry service offers six free trips, Monday through Friday, from 4:50 am to 8:30 am. Non-commuter trips cost $7 per passenger each way.

Pre-pandemic ridership varied between 68,000 and 83,000 annual passengers; 2020 saw 43,000 passengers, and there were 51,000 in 2021. The 2019 contract had a sixth free trip added, with the city and Port sharing costs, for a total of $206,075 per year, with annual CPI. The current CPI adjusted cost is $221,888. Flagship has continued service since the contract expired, and has requested a yearly total of $302,022, which is a 47 percent increase over the previous contract. Flagship cited increased fuel, personnel, operation, and administrative costs, as well as research and development of energy efficient electric vessels, which is required by January 2026. The new contract projects 55,000 riders for 2022, with 116 riders per day, one way. The current contract is $4.04 per rider, assuming round trip fares, and the proposed contract is $5.50 per rider. The non-commuter fare remains at $7 one way. The ferry is financed by TDA Article 8 funds which can be used for multi transportation terminals, express bus and vanpool services, commuter ferry services, and any other modalities would have to be modified through SANDAG. Coronado received $242,595 in 2022 and will get $313,435 in 2023, which will fund Flagship’s contract proposal. The council discussed the increase and felt it was justified with rising costs.

There was discussion having MTS manage the ferry contract, which does not have to be done by the city, but there were concerns about what the city would be giving up doing this. Potential benefits could include expanded grant eligibility and less work for city staff.  The city conducted a two-day ridership survey on September 27 and 30, 2022, noting that it offered good data, but did not capture peak summer months. Fifty percent of the respondents live in Coronado; 38 percent were military, including active duty and civilian; 40 percent work in Coronado, while 30 percent work in downtown San Diego; 73 percent are commuters with 24 percent using it for recreational use, cycling, beach, etc. If the ferry was not free, 49 percent said they wouldn’t use the ferry, eight percent would, and 32 percent were unsure. During council discussion, grant eligibility was highlighted, because Flagship is a private company, which limits grant availability.

Councilmember Sandke pointed out that increasing ridership is crucial to making a large environmental impact. He noted that with the new Chula Vista waterfront development and Gaylord Hotel, there will be opportunities for long run ferries. He also noted that the current ferry system is not conducive to pivoting for special needs. He had three asks: the first was to have Congressman Scott Peters write a letter to the Navy requesting the ferry service be reinstated for NASNI; the second was to extend the contract through June 2024; and the third was to ask staff to explore moving the contract administration from the city to MTS. Both Councilmembers Heinze and Donovan advocated for talking to the Navy before having contact with Congressman Peters. Councilmember Tanaka said he felt the NASNI ferry had been successful but was halted due to security reasons. The council unanimously approved a motion to give Flagship the new increased rate retroactive to the previous contract end, have staff research the pros and cons of having MTS administer the contract, and talk to the Navy and then reach out to Congressman Peters regarding a letter.

Several people spoke during Oral Communication regarding their upcoming events. Matt Bettencourt, who is on the Board of Directors of the AWS1 James Buriak Foundation, talked about their upcoming event. The Foundation was founded after five Navy personnel were killed in a Navy helicopter crash off the coast in San Diego on August 31, 2021. The Foundation honors “Jimmy” Buriak, a naval aircrewman rescue swimmer (AWS), and offers pre-and post-mishap education and support for the Navy and Marine Corps aviation community and their families. Bettencourt noted that they held the first annual “Run to Remember LOOSEFOOT 616” on August 27, 2022, in Coronado with 400 participants, and one in Virginia Beach, and also a virtual run, for a total of 600 runners. He asked the council to consider approval for the second annual Run to Remember on August 19, 2023, to help remember those who were lost.

Jason Goyanko, Swim for Special Operations Forces (SOF) Event Director, noted that their 2021 event had 87 swimmers and raised $275,000 for the Honor Foundation. The 2022 event was September 17, 2022, a 3.3 mile swim and workout starting in Coronado, with an option to end at the USS Midway. Goyanko asked the council to support the event for next year on September 16, 2023. The Honor Foundation has more than 1,600 graduates to date, with campuses in San Diego; Virginia Beach, VA; Camp Lejeune, NC; Fort Bragg, NC; Eglin, FL; Tampa, FL; and two virtual campuses.

Fourth of July Interim President Robert Kraft said they had looked at what other cities were doing and got inspiration from the 92118 Day deciding to create a fundraising Freedom Fest Cornhole Tournament, which would include a beer garden, vendors, food options, and community and military booths. He showed a proposed layout for Orange Avenue/2nd Street, to which there were objections due to traffic and emergency vehicle logistics. Councilmember Tanaka and Mayor Bailey wanted to reward the Fourth of July committee for their hard work, and asked city staff to work further with Kraft and the committee to see if the Orange Avenue proposal was viable, and if not, then look at Spreckels Park as an option. Kraft also asked the council for clarification on where the Fourth of July concerts would be allowed on the golf course, and if the fireworks will still be at Stingray Point versus on a barge next year. City Manager Friend weighed in saying that she realized the need for expediency in these decisions and staff would provide answers soon.

The council praised Maples on her first presentation and staff for creating the decision criteria matrix, and unanimously approved the 12 major, 12 moderate, and two minor events requests, and a maximum distance of 12K for the Crown City Classic, as well as the seven associated requests for alcohol service waivers. An additional motion to approve the Orange Avenue location, with further staff exploration, for the Freedom Fest Cornhole location was approved with Councilmember Donovan voting no.

In closing, Councilmember Sandke gave highlights about a Chamber meeting he attended in Mexico City on the ongoing sewage issues. He learned that in 1970 only 20 percent of the Tijuana sewage was treated and now 85 percent is treated. He commented that the new sewage plant should start in 2023, with a completion date of 2025. There is a quick fix, which kills 60 percent of bacteria utilizing an aeration and chlorination approach that could take place before the more permanent solutions. He said that Mexico is paying 20 percent of costs and will be incentivized as work on the Mexican side gets completed. Mayor Bailey, City Manager Friend, and Assistant City Manager Winney have also been attending a variety of lobby and sewage-related meetings, to help move the project forward and ensure legislation is completed for the EPA monies to be available when needed.