The brief City Council meeting on October 18 began with Mayor Bailey giving a proclamation honoring Coronado Lions Club White Cane Day on October 29 to Lions Club President Gene Arnold, Board Member Floyd Ross, and Carrie Downey. Lions International, the largest service organization in the world, with 1.4 million members in more than 210 countries, just celebrated its 105th anniversary. The Coronado Lions Club started 83 years ago and hosts this event to give “The Gift of Sight.” Volunteers will be at Vons collecting money and eyeglasses for The Seeing Eye Dogs of the Desert, The San Diego Center for the Blind, and the Lions Club Optometric Center. 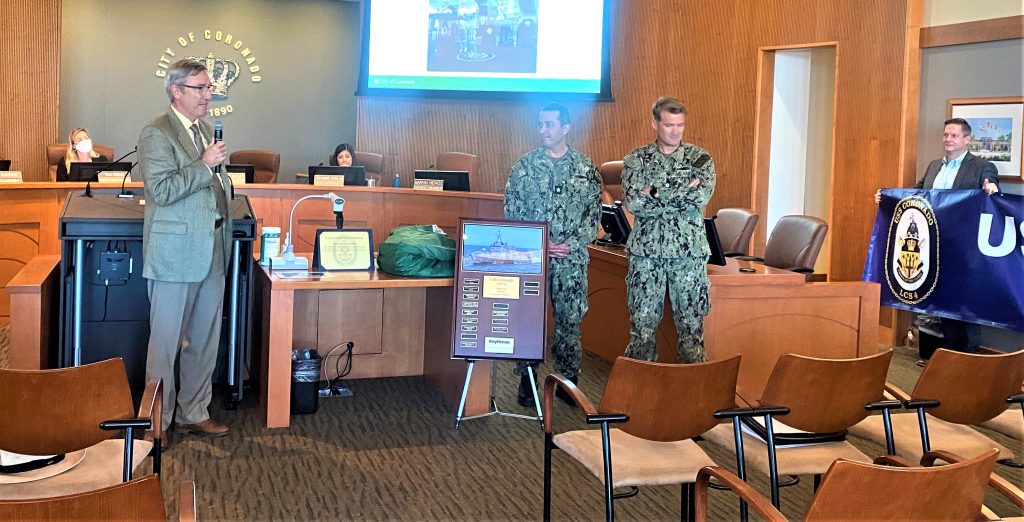 The Council accepted memorabilia from the recently decommissioned USS Coronado (LCS-4), which included a large city flag that was presented to the ship when it was commissioned on April 5, 2014, along with the traditional ship’s bell, and brass identification lettering. The last Commanding Officer Spike Lamson, and Executive Officer Joshua Freeze presented the items. Councilmember Marvin Heinze pointed out that this was the third ship named the USS Coronado, one of which he served on, and said he hopes there will be another one in the future. He also joked that our city now has the largest flag in the world. Former Councilmember Susan Keith, who was the ship’s sponsor, proposed having a group march with the flag during the Christmas parade, and asked the city to give the items to the Coronado Historical Association (CHA) for preservation.

Councilmember Donovan was absent from this meeting, and several additional items were approved on the consent calendar including a Policy #2 request from Mayor Bailey for an agenda item to review the level of service at signalized intersections along SR 75 and provide recommendations for improving traffic flow with priority on the intersections at Avenida Del Sol, Third, and Fourth Streets.

The Free Summer Shuttle (FSS) began as a pilot program in 2013. The report on the 2022 Coronado FSS noted that it operated from May 27 through September 5, and carried 79,741 passengers, an average of 731 riders per day, an increase of 45 percent over 2021. The route consisted of the MTS 904 route between the Coronado Ferry Landing and Coronado City Hall that provided 15 minute headways with four operational buses. The report indicated that ridership is rebounding since the pandemic. Interestingly, the peak ridership day in 2022 was on July 15 with 1,500 boardings, almost double the daily average. The lowest ridership day occurred on June 6 with 146 passengers. The Cays Fourth of July shuttle was just one day this year with a total of 917 riders, an increase from the previous year, which ran two days with 880 passengers. The cost to the city for the 2022 FSS Program was $179,562.