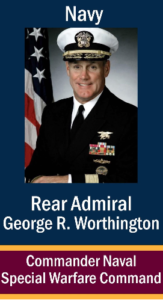 Born in Louisville, Kentucky, in 1937, Rear Adm. George Rhodes Worthington grew up in Tucson, Arizona, attended South Kent School in Connecticut, and spent one year at Brown University before matriculating to the U.S. Naval Academy. A member of 2nd Company, he graduated and was commissioned an ensign in 1961. His first tour was aboard USS Halsey Powell (DD-686), which participated in the 1962 Christmas Island bomb tests.

Following a two-year assignment as Flag aide with Cruiser-Destroyer Flotilla 7, Worthington volunteered for Underwater Demolition Team training in Coronado. He graduated with Class 36 and deployed in support of 7th Fleet operations. Rising through the ranks, he would command SEAL Team 1, Inshore Undersea Warfare Group 1, Naval Special Warfare Group 1, and Naval Special Warfare Command. He also completed staff tours with Naval Special Warfare Group in Vietnam, as naval attaché to the U.S. Embassy in Cambodia, on the staffs of the Chief of Naval Operations, and the first Deputy Assistant Secretary of Defense (Special Operations). A graduate of both the U.S. Marine Corps Command and Staff and National War Colleges, he retired from active duty in 1992.

Worthington was a member of the San Diego Military Advisory Council  and served on several boards, including Zodiac North America, L3- Communications/Wescam-Sonoma, and the Special Warrior Foundation, a nonprofit organization providing college scholarships for children of deceased members of Special Operations Forces. He worked on littoral warfare requirements and initiated the Navy’s Sea Fighter project.

Worthington penned chapters about the SEAL teams for two anthologies, “The Navy” and “United States Special Operations Forces” and co-authored the book “Naval Special Warfare.” His memoir, “Runnin’ with Frogs,” was published  in 2018. Along with being a U.S. Parachute Association “D” License sport  parachutist with 1,622 skydives, he was an avid skier and U.S. Masters  Swimming All-American.

Worthington died from complications of  Parkinson’s  at  home  on  Dec.  18,  2021. He is survived by his wife Veronica; children Rhodes, Graham, and Greer; five grandchildren Madeline, Mackenzie, George, Penelope and Rhys; brother, William; and former wife, Sydna Alexander Worthington, mother of his children.