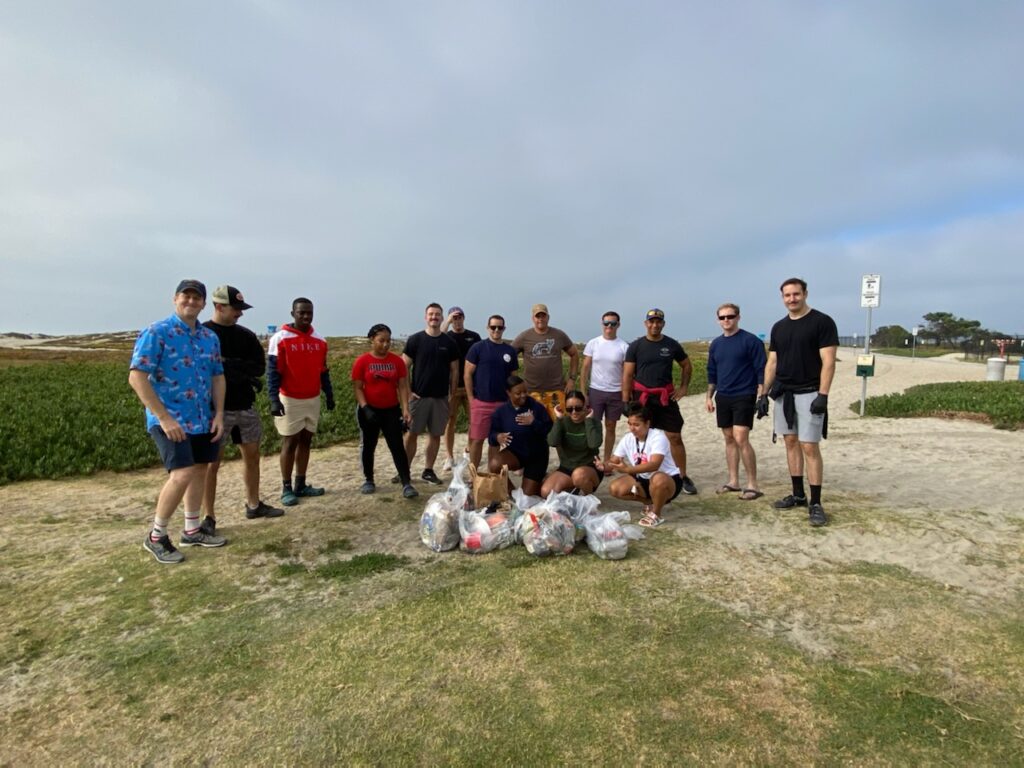 “I have a group of volunteers who like to clean the beach.” When Chief Petty Officer Kristjon Reuling contacted Emerald Keepers to inquire about the possibility of his command (Helicopter Maritime Strike Squadron 49 (HSM-49) — the Scorpions) participating in a beach clean-up, Reuling was pleased to learn he could organize a small group clean-up on Coronado beaches and a permit would not be required.

Emerald Keepers’ President Amy Steward “sweetened the pot” further by promising Reuling homemade chocolate chip cookies for everyone who showed up to help. True to her word, she delivered dozens of cookies on the day of the event.

Reuling and his team of volunteers arrived at Dog Beach at 7 am to clean Coronado’s North Beach. Chatting together in a small circle, their sense of team was evident from the start. With evident pride, Petty Officer Bernise Morales observed, “Our CO is here setting an example for us.” 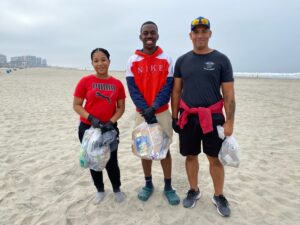 “We try to get out into the community as much as possible to do our part,” said Commanding Officer Dave Vogelgesang. “Most of the people in our squadron are service-oriented already, so it’s really easy to get them out to help our community.”

Vogelgesang went on to explain that roughly half the squadron is comprised of rescue swimmers who fly with a crew of three and are accustomed to teamwork. “The men and women do a lot of training in the bay and are out there for rescue swimmer stuff. They see a lot of plastics and know how much better it can be,” said Vogelgesang. “We’re here today trying to make it better for everybody.”

Rescue Swimmer Jeffery Miller captured the group sentiment, “We love the ocean. I see all the trash out here on the beach now, and half of it is near a garbage can. People just aren’t putting it in the garbage cans. If everyone would just pick up what they brought here! Less trash being out here means less infection and less trash when I’m swimming in the ocean.”

Christina Perea said, “I am a San Diego native, and I’m out here because I like cleaning the beach. I like to think if everybody has this mindset of picking up trash, we wouldn’t have to come out here and volunteer to do it.”

The men and women of HSM-49 cleaned the beach for over an hour, working from the waterline into the dunes. Near the end, they walked shoulder-to-shoulder to make one last sweep of North Beach. The result: dozens of trash bags full of trash and flotsam.

“I’m out here because it’s important that, as part of the military, we give back on a regular basis; and the local community is where we should start because it’s right outside our base,” Kent Gebicke said. “We love Coronado. We — Naval Aviation — have been here for over a 100 years. It’s important that we show our support because we are supported by the community.”

Bravo Zulu (“congratulations” in navy speak) and a hearty “thank you” to the men and women of HSM-49, our July Emerald Keepers of the Month.

Back to School Sustainability Guide