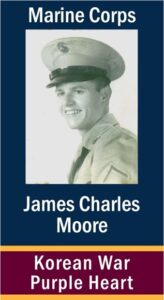 During World War II, two Marines from Swissvale visited his high school. He was impressed with their stories, foreign travel and opportunity to learn a trade as an aircraft and engine mechanic. They enlisted in February of 1949 in Pittsburgh.

After graduating from Boot Camp at Parris Island, South Carolina, Moore was ordered to Camp Lejeune, North Carolina, and assigned to the Second Medical battalion. Training complete, he was ordered to Rodman Naval Station in Panama for a two-year tour and trained as a Military Policeman.

In June 1950, the Korean war started. He wanted to volunteer immediately, but because of his orders in Panama until September 1951, he could not. After leaving Panama, he sailed to New York, past the Statue of Liberty and into Brooklyn Naval Yard.

Orders ensued to Camp Pendleton, California, for three months of combat training. He then left for Korea assigned to Dog Company, 2nd Battalion, 7th Marine Regiment, 1st Marine Division as an Infantryman. Dog Company was based in the Taebaek Mountains of North Korea. On Memorial Day 1952, Dog Company led an attack. Halfway up, intense small arms gunfire erupted, and grenades started rolling down. One landed four feet from Moore, who was wounded on his left side.

Moore settled in Coronado. He entered the apprenticeship program at Naval Air Station North Island and became an aircraft mechanic. He retired from civil service after 37 years as an Industrial Engineering Technician. He and his wife Carol, still live in Coronado. They have four children, and five grandchildren.