Coronado was buzzing a little more loudly yesterday than the typical “sounds of freedom” made by fighter jets and helicopters streaking across the sky. Tom Cruise arrived in Coronado on May 4 for a red carpet premiere and to treat Navy personnel to a highly anticipated viewing of Top Gun: Maverick. There were special screenings at North Island Naval Air Station in Coronado and also an appearance on the USS Midway (just a short helicopter ride across the bay for Cruise). The MTV interviewers and Tom Cruise / Top Gun fans were not disappointed. It’s been 35 years since the original release of Top Gun and at least two years of the movie release being delayed due to COVID.

With the lights turned down and every seat full, the energy in the room was bursting at the seams. Three words: Top Gun: Maverick. It hit the screen and clapping and shouts were heard up and down every row. There was no better place to watch this long awaited Hollywood film than North Island’s Lowry Theatre – Go Navy! The “home turf” advantage is evident as the audience enjoyed recognizable San Diego scenes, aircraft, and potentially friends posing as extras. 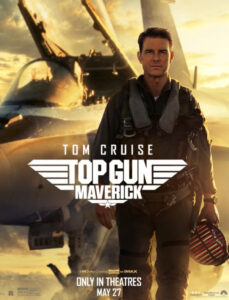 The first scene depicts our beloved Maverick now 30+ years older yet still displaying his unique essence and brazenness. We learned from the original 1986 film that rules were made to be broken, and no less does this theme ring true than in Top Gun: Maverick. Yet, pushback comes as new characters are introduced. The audience goes on a wild “Goose” chase as Maverick is commissioned with the job of instructing the new Top Gun class, including Bradley “Rooster” Bradshaw, the son of his best friend, LTJG Nick “Goose” Bradshaw who died in the first movie.

Tapping into our nostalgia, Goose’s son Rooster sits down on the set of North Island’s I-Bar and plays “Great Balls of Fire.” The scene sets the mood for the rest of the film as Maverick fights the nightmares of the past while trying to hone tactics and precision in the most elite group of pilots in the navy. The film was an impressive display of military collaboration, playing the heartstrings of the audience as it appropriately honored the US Navy and pays homage to the new technological advancements in military aircraft.

While not everyone will get the unique privilege of watching the film with Navy pilots and service members, the film offers an exciting, action-packed experience for the viewers. Two enthusiastic thumbs up.