Coronado Conversations and Connections for the Triangle Project 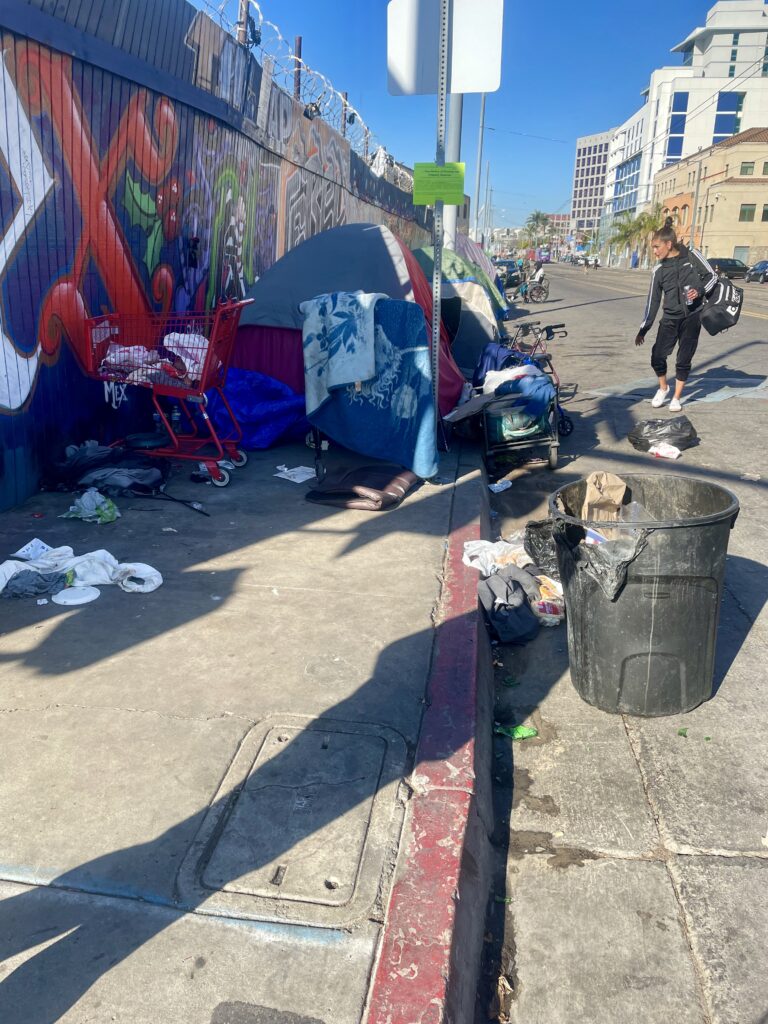 The early morning sun shone brightly as a group canvassing the San Diego downtown homeless encampment called out to the homeless. 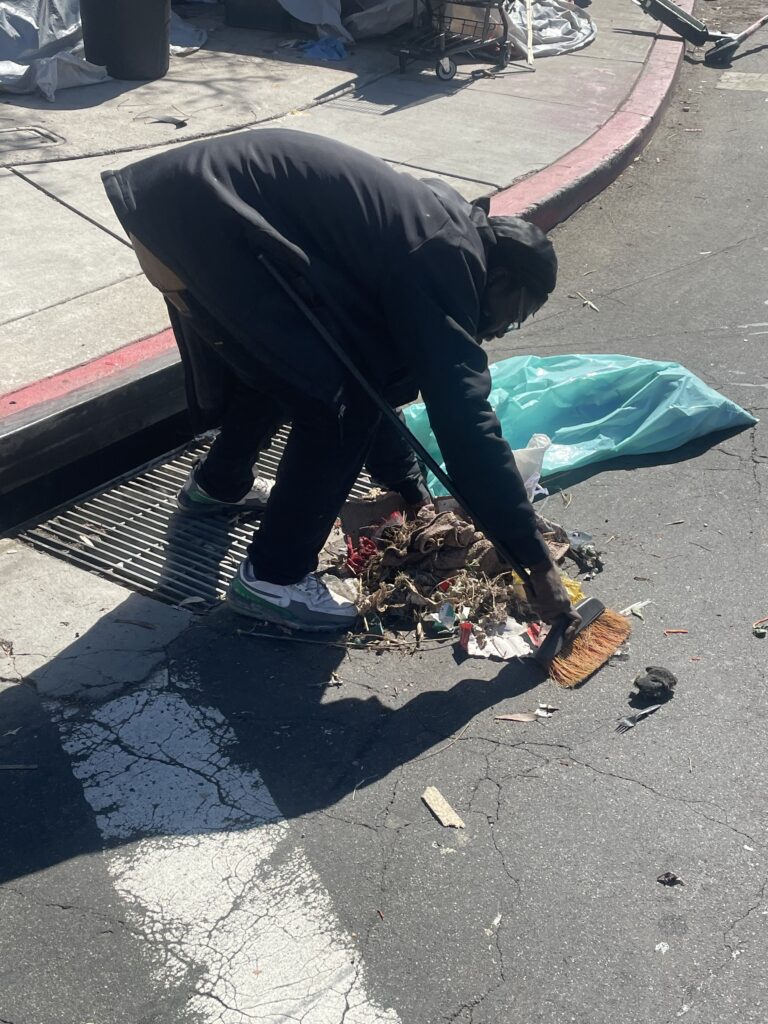 Walking down the line of tents, several volunteers engaged the homeless. “Good morning. Have you heard about the trash pick-up this morning? We are giving out $2 for each bag you fill with trash and bring to that dumpster around the corner. There’s someone there who’ll pay you for your bags. We’ll be doing this every Monday and Thursday from 8am to 11am. You want some trash bags?”

A bright-eyed young camper named Wella eagerly took several bags and the flyer explaining the novel concept. She was gone in a flash.

It wasn’t long before people carrying bags filled with trash began arriving at the dumpster. The first to drop off a bag — Wella.

“You are awesome,” a volunteer called to Wella. “Thank you so much.”

Wella thanked the volunteer for the opportunity to be able to clean her camp and moved off to fill another bag. The inaugural day of The Triangle Project was underway. 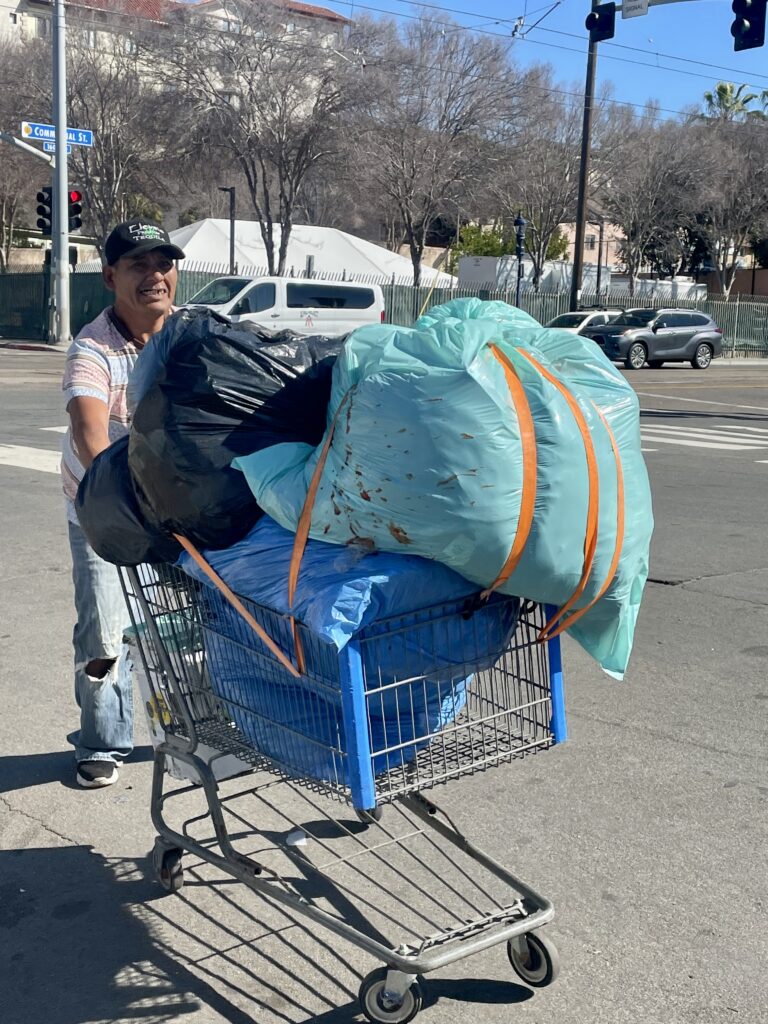 The Triangle Project began as a conversation between Emerald Keepers president, Amy Steward, and Coronado resident, Alex Yakutis. Having attended several SANDAG Litter Abatement Committee meetings last year, Alex was able to explain the big costs associated with working along major roadways (not to mention inconvenience caused to commuters). He estimated roadside trash collection could — conservatively — be accomplished at a fraction of the current cost. During the conversation, he wondered out loud, “What if the homeless were paid to pick up trash? They could grab it off local streets and before it reached the freeways or local waters.”

Trash along our roadways flows into storm drains following a rain event and ultimately ends up in the bay, ocean, and on beaches. It is estimated 33 billion pounds of plastic enter the world’s marine environment every year. During the pandemic, the plastic seemed to have quadrupled! 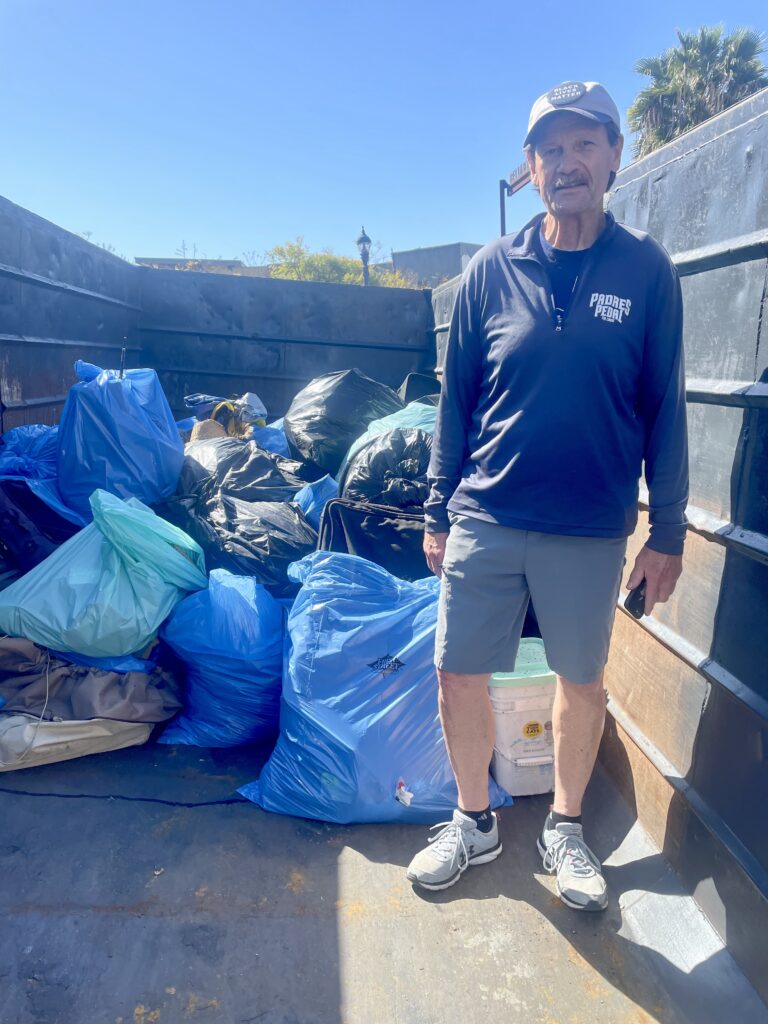 Steward contacted Brian Trotier — whom she had met through Coronado’s Neighbor to Neighbor (N2N) program in the early stages of the pandemic — knowing he worked with the homeless regularly. Trottier believed the idea could work. He had, in fact, considered not only having the homeless pick up trash, but paying them to add an appealing twist. Not only did the idea solve the trash issue, but more important to Trottier, it incentivized the homeless to be part of a solution and build their self-esteem.

Trotier brought the idea to the Lucky Duck Foundation — a group of local philanthropists led by the Kilkenny family dedicated to alleviating the suffering of San Diego County’s homeless population. The foundation approved funding a four month trial — paying EDCO’s dump fees, bags, and cash for bags of trash March through June.

“Brian did the heavy lifting to make this happen,” explained Steward. “He is passionate about helping the homeless. He and his wife have been helping them since 2006. 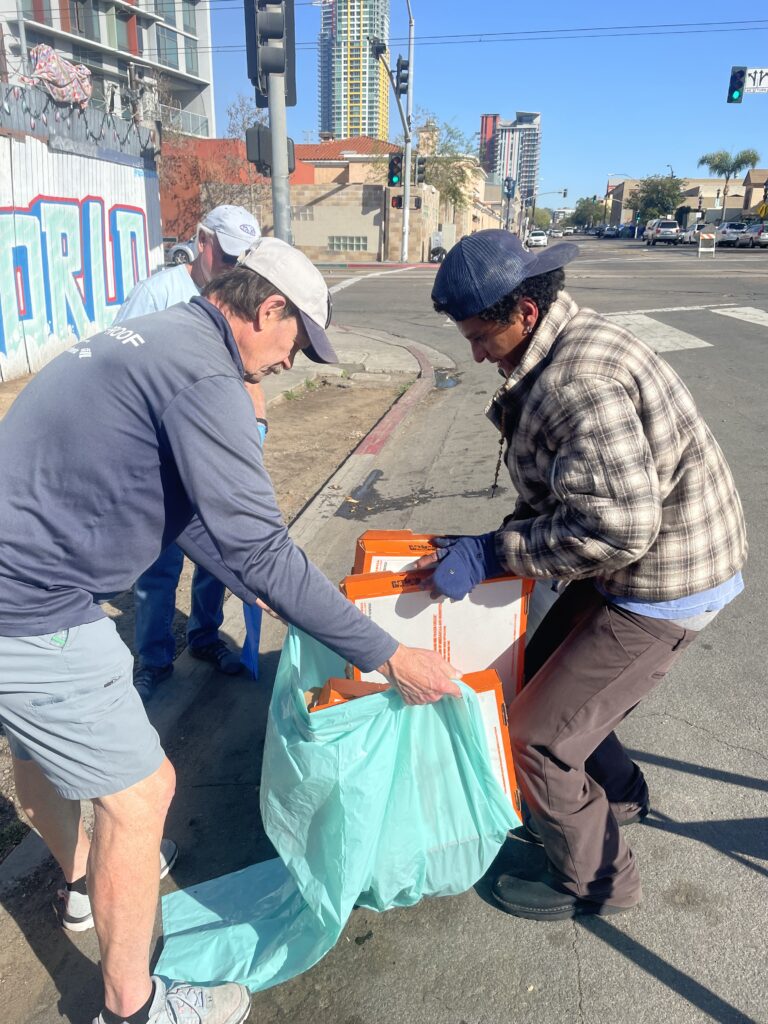 The concept is simple. EDCO delivers a trash skiff at 8:00am on pick-up days and picks it up at noon the same day so as not to create an attractive nuisance. The day prior, volunteers remind campers about the clean-up. On clean-up days, volunteers pass out trash bags, receive full bags, load the skiff, and hand collectors $2 per bag.

During a lull in receipt of bags, the Community Manager of an adjacent apartment complex, Oscar Sauer, came over to thank the volunteers and offer them the use of his bathrooms if needed. Saucer went on to say, “These people are my neighbors. Every other week, they have to move across the street to my side. I try to give them trash bags so they can clean up. We all have to get along… and do what we can each day. They are used to aggression from everyone. But they’re just humans and we need to see them as people.”

As more people arrived with full bags, Trotier, Yakutis, and Steward were overcome. There were tears, touching stories, joy, gratitude. A simple idea was taking root before their eyes. As word spread among the homeless and more bags were brought in, the volunteers recognized something special was taking shape. Soon three large cartons of trash bags had been distributed and the skiff was filling fast.

As Trotier was wrapping up the first day of this successful endeavor, two young homeless men appeared. “Here, I want to donate a dollar to this program. What you guys are doing is really helping. I wish I could give you more.” The second held out another dollar.

With tears in his eyes, Trotier thanked them and then said, “Keep your dollar and take this bag. Fill it up, and I’ll give you two more dollars.”

As Trotier observed several times during the morning: people too often pass by encampments and only see trash, not the people. This morning, the volunteers witnessed firsthand the people… their humanity… good humans trying to survive. And dignity restored.

Volunteers are needed to support the twice weekly Triangle Project through June and prove to San Diego’s leadership that the homeless are willing and able to be part of the solution. Want to be part of a solution? Contact Brian Trotier at [email protected].