“Losing my dad at the age of 12 had a profound impact on my life,” shared Francis Gary Powers, Jr., whose Airforce pilot father’s U-2 plane was shot down during the Cold War in 1960 in the USSR. His story was profiled in the 2015 award winning film Bridge of Spies, and was recently shown when the Coronado Historical Association (CHA) and the Coronado Island Film Festival (CIFF) partnered for a screening and commentary evening. A VIP meet and greet reception was attended by about 70 guests, who enjoyed mingling and nibbles from the charcuterie table from Little Frenchie’s restaurant, with 150 people attending the movie. Following the film, Powers Jr. shared his insights on what was fact versus fiction in the powerful movie, and his role in it. The powerful tale hits especially close to home, with current world events.

The riveting film was nominated for six Academy Awards, including Best Picture and Best Original Screenplay, and Actor Mark Rylance won for Best Supporting Actor, portraying Soviet Intelligence Officer Rudolph Abel. Under the direction of Steven Spielberg, Tom Hanks is notable playing James B. Donovan, the lawyer pivotal to the prisoner exchange, and Alan Alda also makes an appearance as his boss.

When Powers Jr. heard that Spielberg was making a movie about his father’s life, he knew he wanted to collaborate to ensure the truth was told. By sending emails to several of Spielberg’s associates, he ended up connecting, and became a technical consultant on the film, and even had a cameo role. He fondly remembers meeting Spielberg and Hanks, and enjoyed being with the crew, recalling when “lights, camera, action” was called on the bridge set in New York City.

Powers Jr. said that overall, the picture is historically accurate, with some of the details added for Hollywood drama. For example, in the scene where the house is shot at, it actually took place in an apartment building. “Some of the details were embellished to make it more dramatic, to keep the audience on the edge of their seats,” he shared. He also noted that it is hard to cover every detail of seven years of history, when condensed to just two hours.

An introvert in high school, he came out of his shell in college, and wanted to find out the truth about his father’s legacy. He purposefully chose a different path than his father’s military and media avenues, but has published several books and numerous articles. His latest book Spy Pilot: Francis Gary Powers, the U-2 Incident, and a Controversial Cold War Legacy, is an account of his father’s life, based on personal files that have never been previously available, including the transcript of his father’s debriefing by the CIA, other recently declassified documents about the U-2 program, and interviews with his contemporaries. When his dad returned, he said there was controversy as to whether he was a hero or a traitor.  He notes that as files of the U2 program were declassified through the years, the truth came out about his father not divulging secrets.

An avid history buff, he is the Founder and Chairman Emeritus of non-profit The Cold War Museum in Virginia. He also lectures internationally and appears regularly on the History, Discovery, and A&E Channels. 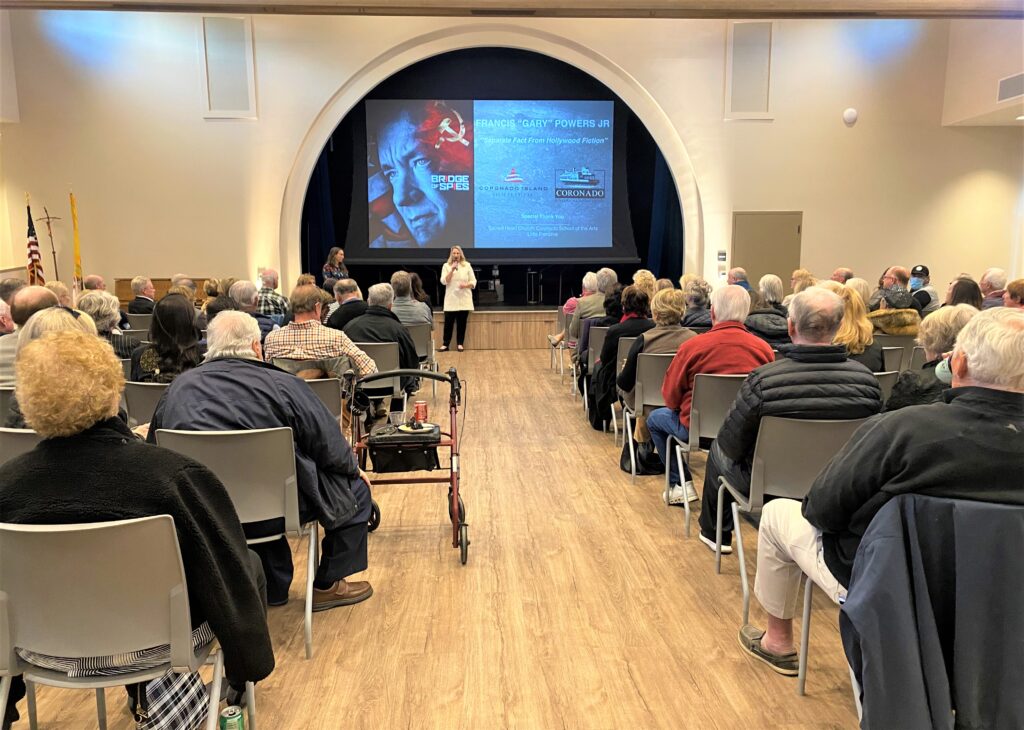 CIFF Executive Director Merridee Book shared that this partnership helped bring the community together to celebrate and is especially timely in the current geopolitical climate. CHA Executive Director Christine Stokes noted that Powers Jr. has attended other CHA events, but this collaboration allowed for the movie screening. Watch for more exciting upcoming events at  https://coronadofilmfest.com/ and https://coronadohistory.org/.

On Thursday morning, March 10, Powers Jr. will be at the Winn Room for an author talk.