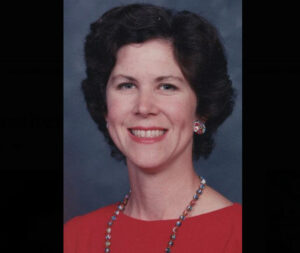 Jane Dee Lassiter, beloved wife, mother, sister, and grandmother passed away quietly in her sleep on Dec. 19, 2021, at her home in Coronado. She was 65 years old.

Janie was born on Nov. 20, 1956, to Don and Margaret Adams in Patuxent River, Maryland where her father was stationed with the Navy. The fourth of five daughters, Janie was doted upon by her big sisters. Her younger sister remembers her as being the best playmate because of the imaginative games she invented.

Much of Janie’s childhood was spent in Van Nuys, California. The family attended the First Baptist Church of Van Nuys where Janie was very active in choir and youth activities. She attended Los Angeles Baptist High School until the family moved to Coronado after her junior year. She continued to be involved in music both at church and in school. Janie graduated from Coronado High School in 1974 and was a member of the National Honor Society. In 1978 she graduated from Point Loma Nazarene University with a degree in Early Childhood Education and received her teaching credential.

Janie married the love of her life, David Lassiter on Dec. 16, 1978, and they moved to Vacaville, California, where they both taught school at the Vacaville Christian Academy. In 1985 they moved to Catalina Island where David was hired to teach and coach sports and Janie taught elementary school. Janie was active in school plays, and worship team at their church. In 1987 their daughter C.J. was born. During their time in Avalon the family enjoyed boating and exploring the backcountry of Catalina. Although she continued substitute teaching, Janie’s primary focus was on being a mom.

In 1995 they moved back to Coronado, where both of their families had deep roots. They rejoined the First Baptist Church of Coronado where Janie was a leader on the church music and worship team, while also helping to care for her elderly parents. Janie was subsequently diagnosed with early onset Parkinson’s Disease but continued to be optimistic, active and involved with her church and family.

Janie delighted those around her with her intelligence, kindness, faith, and clever sense of humor. Happy and positive, she never lost that spark of joy and playfulness that so many of us lose as adults. She would break into song frequently, and took advantage of any opportunity to dress up in costume, passing this love of spontaneous performance on to both her husband and daughter. Her knowledge of all types of trivia was legendary. Janie loved to sew and made numerous quilts, most of which she gave away as gifts. She loved the beach, especially boogie boarding, and continued to ride the waves even in recent years, with close support from family. She was the reigning queen of African Violets at the Coronado Flower Show.

Janie enjoyed a close and loving relationship with her sisters and delighted in the times they could be together to share memories of their childhood and their parents. Her family cherishes the frequent sister reunions they were able to have in recent times when out-of town family members made the long treks to Coronado from other parts of the country. Janie’s clever remarks and beautiful laugh made many precious new memories.

Janie and David’s marriage and family life were full of love, laughter, and music. Having passed on her passion for music to her daughter, she loved to listen to C.J. sing. She delighted in her two grandsons, and was forever grateful for the abiding love and care provided to her by David. Janie’s faith was central to who she was. She exemplified a life following the example of Jesus and his love for all people.

Janie was a bright light who will be missed by her family, friends, and all who had the good fortune to know her.

A celebration of life for Janie was held on Dec. 28 at the Coronado First Baptist Church.

Memorial donations can be made to the Michael J. Fox Foundation for Parkinson’s Research.