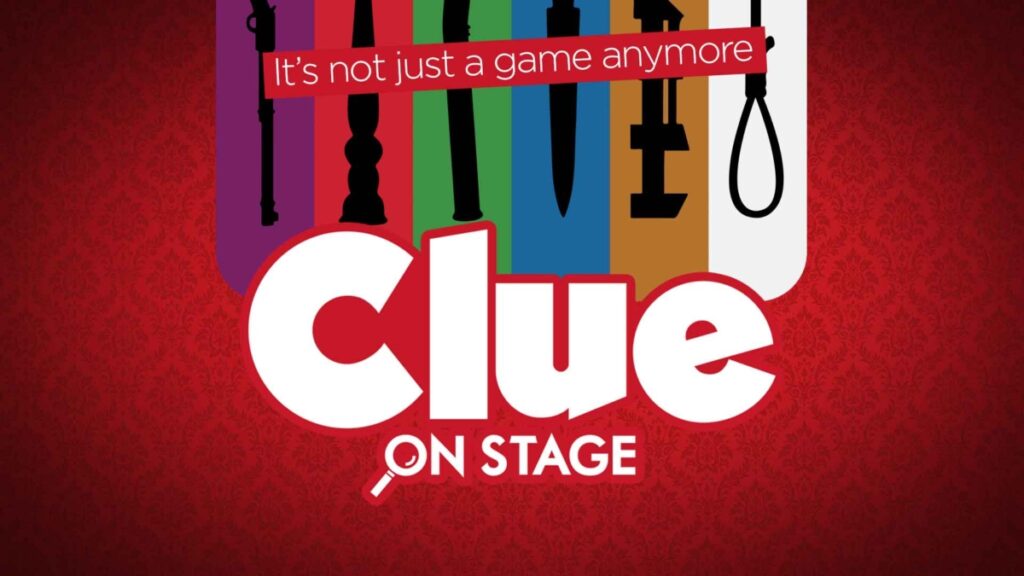 Coronado Playhouse closes its 2021 main stage season with Clue, based on the popular board game, performing live from Friday, November 5 through Sunday, December 12.

On a dark and stormy night, six oddball guests, a butler, and a maid assemble for a dinner party at the home of Mr. Boddy. When their host turns up dead, it is clear that no one is safe! Soon the guests are racing to find the killer and keep the body count from stacking up. Join the iconic Miss Scarlett, Professor Plum, Mrs. White, Mr. Green, Mrs. Peacock and Colonel Mustard as they race to find the murderer and out game each other.

The stage adaptation is lovingly based on the original cult classic 1985 Paramount movie which was inspired by the classic Hasbro board game, Clue. The writers include Jonathan Lynn, who directed the original movie, Broadway star and director Hunter Foster, who directed the world premiere of Clue on Stage, Sandy Rustin and Eric Price.

This hilarious farce-meets-murder mystery will keep you guessing, and laughing, until the final twist as you try to figure out…WHO did it, WHERE and with WHAT!

When blackmail and murder are on the menu, everyone is a suspect.

Coronado Playhouse is excited to welcome back seasoned director, Desha Crownover, to the project. Desha is an award-winning stage and musical director with over 75 shows to her name, ranging from intimate black-box style plays to fully-staged musicals. She has had the opportunity to direct, teach, and perform across the country for the past twenty- five years where her work has been commended by such theatre notables as Edward Albee, Ming Cho Lee, Patricia Zipprodt and Timothy Near. She holds a Master’s degree in Theatre from SDSU and a B.A. in Theatre with an emphasis in Performing from UCSD and has served on the teaching faculty of SDSU, Cuyamaca College, and Santa Fe Christian Schools teaching music, acting, theatre history, public speaking, and speech and debate. Her work as a playwright has been produced at UCSD, SDSU, and Santa Fe Christian Schools, as well. Desha currently serves as the Artistic Director of San Diego Junior Theatre where she has taught and directed for the past twenty years. She is honored to be back at CPH where she has directed Seussical, The 39 Steps, Macbeth and The Old Man and the Old Moon.

Part of Coronado Playhouse’s mission is to give back to the community. For each show, Coronado Playhouse partners with a local non-profit to raise awareness and funds in support of their work. For this production, the Playhouse is focusing on raising awareness and funds for the San Diego Police Officers Association’s Widows & Orphans Fund. In the tragic event of an officer’s death, the fund provides monetary support to the member’s beneficiary. For more information, please visit www.sdpoa.org.

In honor of the Playhouse’s 75th anniversary, they are inviting you to join the 75 for 75 campaign. For only $75, you will be helping Coronado Playhouse stay afloat in this pivotal year and your name will be added to a list of founders that intend to keep the Playhouse moving for the next 75 years. The goal is to raise a minimum of $7,500 for the year. With your support, we intend to continue to inspire audiences, young and old, to see the world in new ways. Together, we invest in fresh perspectives that inspire our community.

Help keep Coronado Playhouse a San Diego tradition for an additional 75 years and beyond. Visit coronadoplayhouse.org/75for75/ to join today.

Coronado Playhouse is currently requiring patrons to provide proof of vaccination or negative PCR covid test result taken within 72 hours of the performance in order to attend. Face coverings are required when not actively eating or drinking. Please check Coronado Playhouse for any updates to the policy.

This is the sixth and final main stage show in the CPH 2021 Season, which is the 75th anniversary for the Playhouse. CPH has prepared shows that will adhere to standards necessitated by COVID-19, while being comfortable for patrons and performers alike. The shows at the beginning of the year have been smaller in scale but had a big impact in terms of entertainment and significance. The shows later in the season will bring music and some of the larger scale productions patrons have come to expect from the historic institution.

Single tickets are available for the remaining shows of the season. Subscriptions for the 2022 season are available now. Please contact the box office.