The relatively brief September 21 City Council meeting was the first for new City Manager Tina Friend. It was her fourth day on the job, and she thanked her predecessors and staff for their excellent work and commented that she is pleased to be inheriting such a well-run organization.

Friends and family were there to celebrate as Mayor Bailey presented former Executive Director of the Coronado Chamber of Commerce Sue Gillingham with an honorary proclamation of September 21 as “Sue Gillingham Day.” She served in her position at the chamber from May 2015 through June 2021, helping to promote economic vitality in the city and serving as a public policy advocate for the local business community, which proved especially challenging during the COVID-19 pandemic. She is now looking forward to spending time as a grandma, travelling, and working on family genealogy.

The Tijuana River Sewage Issues were the theme of the next presentation, with regards to federal lobbying efforts, by Andre Monette of Best, Best & Krieger. He shared that after sewage issues escalated in 2017, the cities of Imperial Beach and Chula Vista, along with the Port of San Diego, the Surfrider Foundation and the San Diego Regional Quality Control Board filed three lawsuits in 2018 against the federal government, and updated that those have been delayed until at least February 2022.

The most positive step in finding a solution is the modification of the United States-Mexico-Canada Agreement (USMCA) to include $300 million for infrastructure enhancement projects to address cross border sewage flow in the Tijuana River Valley. The EPA started this process with an evaluation of 10 projects, proposed by the City of San Diego, that has been narrowed down to the top three contenders. The first is a comprehensive alternative, the second is a wastewater treatment alternative, and the third is a hybrid alternative. (see chart below for details). The total cost to do all three projects is $566 million, almost double the allocated funds, but there are options of doing pieces of each project and finding more funding to do all of the projects, which would be the goal to yield maximum results.

Councilmember Sandke promoted having an economic dialogue with Mexico via the USMCA to look for cross border funding. Councilmember Tanaka brought up the question of having a private company come in and modernize and make the needed upgrades to the San Antonio de los Buenos Wastewater Treatment Plant and then profit from selling the recycled water as a commodity. Councilmember Donovan asked about the realistic prognosis of getting additional funding, to which Monette answered, “It’s not going to happen overnight. We must keep chipping away at it.” Mayor Bailey noted that the congressional delegation agrees that the initial $300 million is just a down payment for the solution.

In other legislative issues, Monette said that the Infrastructure Bill that was going to help the International Boundary and Water Commission (IBWC) build infrastructure projects passed the House but not the Senate. There is also a continuing resolution to keep the federal government open through December 3, 2021, and a proposed $3.5 trillion budget reconciliation package with major tax changes to pay for programs. The National Defense Authorization Act (NDAA), which includes spending for defense, including Naval Base Coronado, is on schedule to pass the House.

Assistant City Manager Dominique Albrecht gave an update and proposal for the Zuniga Jetty, which is the shallow, mile-long stretch of rocks that extend off the tip of North Island, near the entrance to San Diego Bay where boats are often abandoned. She highlighted that the area can impact the Navy and city beaches with environmental and hazardous issues like oil spills. In 2019, a two-hour parking limit was set for unoccupied vessels, and a pilot program was funded by San Diego with a partnership with the Port of San Diego Harbor Police initiated. Although there were no abandoned vessels during that time frame, the prior year six vessels washed ashore. Coronado does receive funding of between $6,000 and $13,000 for each abandoned vessel that washes onto our beaches. Since the Navy can’t spend money for enforcement on non-federal property, city staff are proposing using the $50,000 set aside in this year’s budget to partner on this project. The city and Port of San Diego want to restart the enforcement program and have affected jurisdictions contribute towards the $200,000 to fund the program, with the goal of obtaining long-term funding.

The mayor asked if there were creative ways to monetize recreational vessels at the jetty and advocated for a long-term solution without a budget line item. All the councilmembers wondered about how strict the two-hour enforcement was and how it would realistically be enforced. While they are in favor of regional cooperation, they have issues paying to enforce San Diego laws. Councilmember Sandke made a motion to direct staff to continue negotiating with the partners in this issue and report back to the council.

Councilmember Heinze pulled an item off the Consent Calendar regarding a five-year agreement with Vigilant Solutions for License Plate Recognition (LPR) hosting and interface for up to $117,199. He asked what the difference was between this expenditure and the one last year for a parking LPR. Police Chief Chuck Kaye noted that this is geared towards criminal justice and commercial data and would co-exist and enhance the existing systems. The council unanimously approved this purchase. 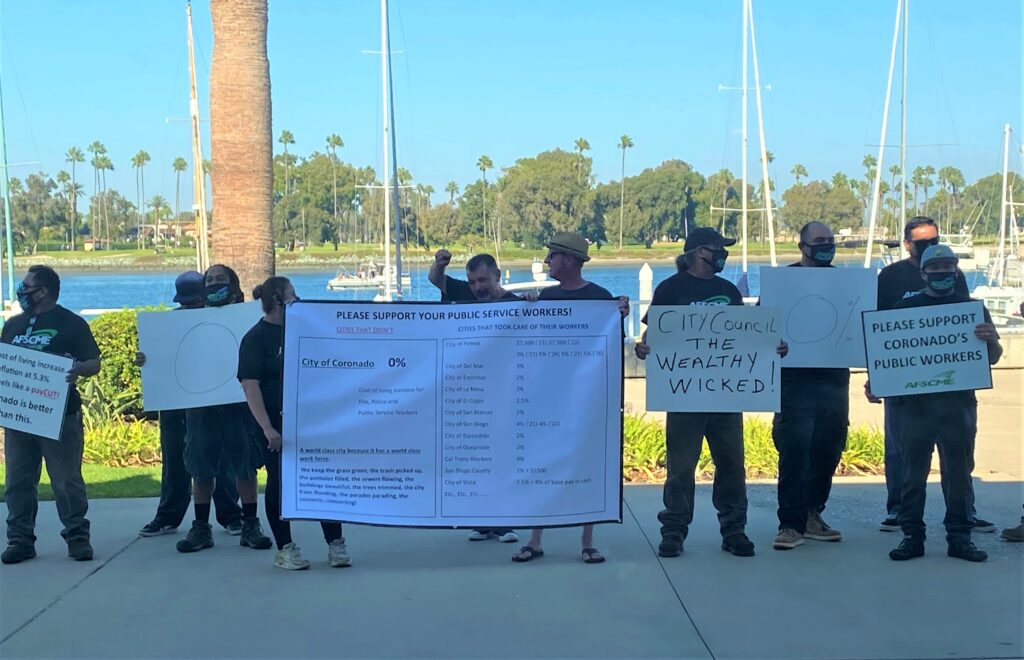 During Oral Communication, Jason Sevier spoke on behalf of the Public Services Wastewater Department to welcome the new City Manager and make her aware of the latest labor bargaining proposal with payroll negotiations currently underway. He was there with a group of approximately a dozen employees who held signs and peacefully chanted outside council chambers.