It was a complete surprise when Blue Bridge Hospitality Principal David Spatafore received an email a few months ago from Michelin asking about general background, operational, and food details for his Little Frenchie restaurant. At the time, he had no idea what it meant, but last week it became clear when he received the news that Little Frenchie had received the prestigious 2021 Michelin Plate award. The honor was also given to four other San Diego restaurants, including Animae, Callie, Fort Oak, and Menya Ultra. From the letter, Spatafore gleaned that the judges had come to Little Frenchie at some point for brunch and liked what they saw and tasted.

“I was shocked and honored to receive this accolade. We opened in May 2019 with a vision, and then had to shut down due to the pandemic in March 2020, pivoting to take-out food and a market. We are glad to be back doing what we originally planned, so getting this award was an especially big deal for us,” Spatafore noted, and said that sometimes people are intimidated by French food, but his goal has been to provide the highest quality food from multiple regions in France in a casual bistro setting. “I feel like the building’s architecture lends itself to our theme and the outdoor dining has been especially helpful during the pandemic.”

Little Frenchie’s Beef Dip, Le Burger, and quiche are the most popular menu items, with everything made with fresh ingredients. Fifty percent of the menu stays the same and the other half appears on a rotating basis with new and seasonal dishes. And while the summer months saw strong sales at Little Frenchie and the other Blue Bridge Hospitality restaurants, the labor and food costs keep increasing. Spatafore is insistent that his restaurants won’t use less expensive ingredients and will always maintain a high service standard for guests.

More than two days is how long the authentic Onion Soup Gratinée at Little Frenchie takes to prepare. It starts with roasted beef bones simmering for 24 hours to create a rich stock and then there are onions to caramelize, and melting imported aged Comté French cheese with a toasted crouton adorning the top. “Our soup has layers upon layers of flavor to make it true to the classic traditional French way,” says Spatafore. Matt Sramek, Blue Bridge Hospitality Executive Chef, is classically trained and works with Estefan Gamboa, the Chef du Cuisine for Little Frenchie. Spatafore says they collaborate on the menu and merge ideas as they each make their case for changes, and sometimes he wins and other times Sramek’s ideas prevail, but often they compromise. For example, for the French onion soup, Spatafore knew how much work went into the dish and wanted to find a fancier way to present it, to showcase just how special it was. Sramek advocated for staying true to the traditional classic but agreed to add a toasted crouton across the top.

Progressive is one way to describe the Michelin brothers who started the Michelin guide books in France back in 1900. They already had a growing tire manufacturing business which they started in 1895, but decided to branch out to judging food. The first star was awarded to a French restaurant in 1926, later establishing the elite three-star measurement in 1931. In 2020, there were 2,651 restaurants worldwide with at least one Michelin star, and only 106 boasting three-stars. France has the most Michelin star restaurants, followed by Japan and Italy. In the United States, there are 192 Michelin star restaurants with only 14 having received the coveted three-stars. Since 2019, Addison is the only San Diego County restaurant to have been awarded a Michelin star.

The Michelin Plate Award is an all encompassing award which denotes a restaurant serves very good food. It is the first step to entering the Michelin system, which includes the Michelin Bib Gourmand and the coveted three-tier Michelin star honors, all of which add a cachet to the restaurants on whom they are awarded. This honor puts Little Frenchie on Michelin’s radar for potential future awards. Michelin will announce its 2021 San Diego County Michelin Bib Gourmand honors on September 22 and Michelin Plate honorees on September 28.

“I feel that French food isn’t as accessible in the U.S. as some other countries, so there’s definitely a market for it here, so people can learn to savor the authentic dishes,” Spatafore highlighted, along with remarking they have seen an immediate uptick in customer reservations and look forward to a bright future.

Little Frenchie is located at 1166 Orange Avenue. Reservations can be made at this culinary star online at littlefrenchiesd.com or by calling 619-675-0041. 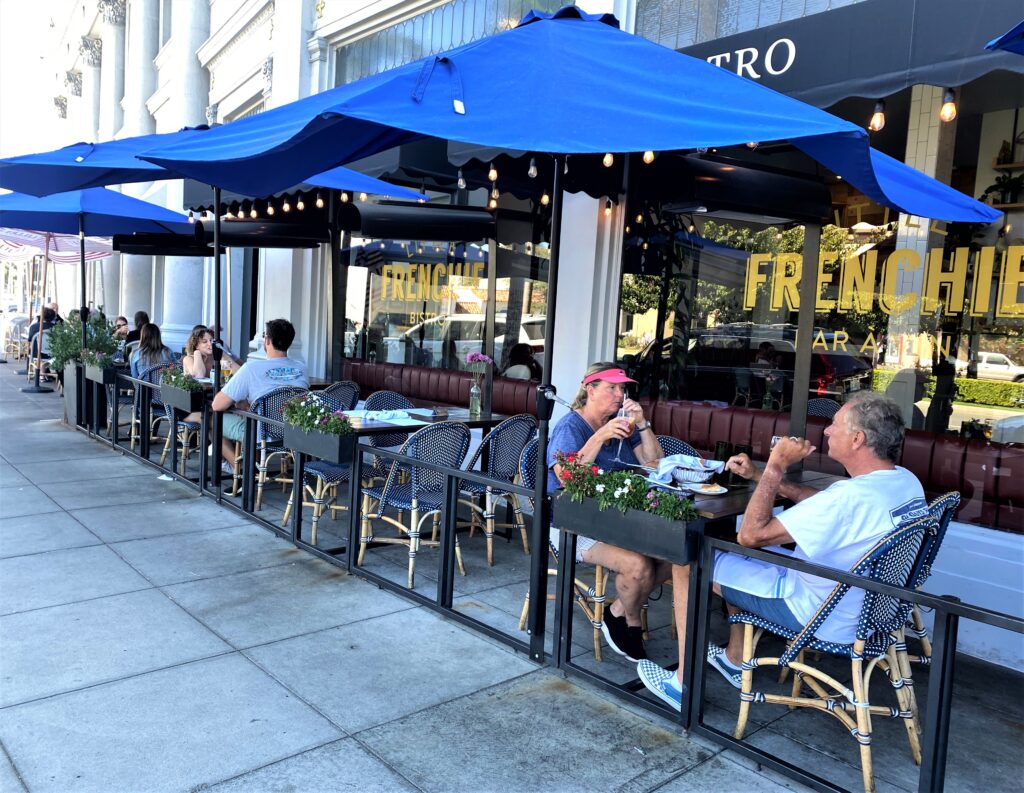