An inside look at the iconic Hotel del Coronado is what you’ll experience by stopping into the newly renovated Ice House Museum, located on the right side of the new entrance driveway. Filled with permanent exhibits and rotating displays, highlighting historical photos and pieces, including land deeds, dinnerware, signs and much more, it’s worth a visit to get a true perspective of the incredible history of this majestic hotel. Admission to the museum is free (and be sure to take a photo by Marilyn Monroe before you leave). The building was built in 1889 and churned out ice for the entire city, which people noted for its excellent taste. The entrance features Legacy Court, which is constructed with authentic reclaimed 1910 bricks that will soon be customized for donors. The space can also be booked for events.

Three informative tours begin at the Ice House Museum. The daily 90-minute Legendary Tour started in 2018, but has been on hiatus during construction and just restarted again a month ago  when the renovated Ice House Museum opened. Heritage Manager Gina Petrone and her staff of eight team members offer the tour daily at 10 am and it costs $40. The 45-minute Haunted Happening Tour promises to divulge spooky secrets for $30 and is offered on Friday and Saturdays at 7 pm. The Self-Guided Tour has 20 stops complete with audio, and is offered during museum hours from 10 am to 5 pm; it lasts about 60 minutes and costs $25. Private tours are also available.

Want to learn how many types of wood were used in The Del’s construction? The infrastructure details are fascinating, especially when you realize the hotel was built in eleven months. Go inside the Oxford Building, which incidentally was moved several times. See the curved brick entry leading to flirtation walkway. Learn about the original pieces, like stained glass windows, clocks, bars, and more, that have been incorporated back into the hotel during the renovation. Hear about the original construction costs and the exorbitant furnishing budget, with imported European linens and china. The Del’s landscaping has an interesting history as well, with original trees, the Dragon Tree famous for its movie debut, and even a Kate Sessions connection.

It’s interesting to learn about the Queen Anne architecture style, for which our tour guide Liz Brunton said that people who like it often call it extravagant, unconventional, and exuberant, while others think it disorganized and lacking symmetry. Features of the style include wood, asymmetry, many windows, lots of texture (as demonstrated in the siding), the inclusion of porches and verandas, spindles, turrets, and towers. The Del is certainly a shining example. 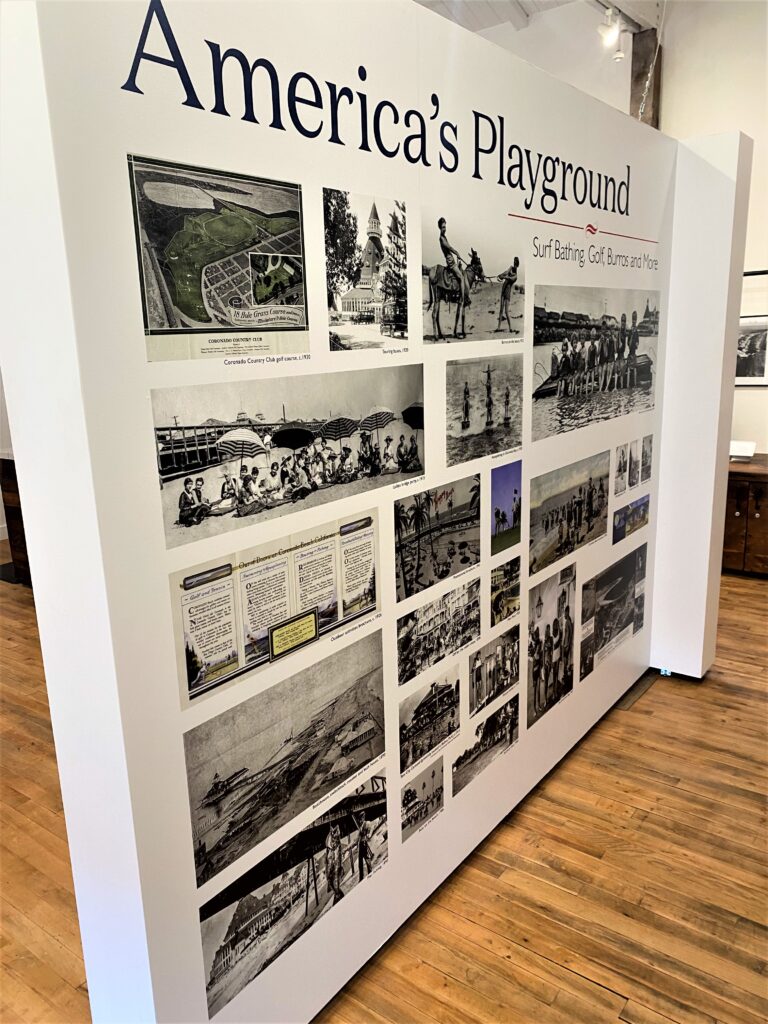 I learned that previously there was a billiards hall and Kodak picture studio, as well as a Turkish bath.  Originally, there were no ocean front rooms because verandas ran the length of the corridors. Back in the day, the most expensive rooms were ground level garden rooms, due in part to the guests’ comfort, or lack thereof, in riding in elevators, which were a new invention. The Crown Room has some amazing history with famous dinners, chandeliers designed by notable people, and even a space called the Gold Coast area. 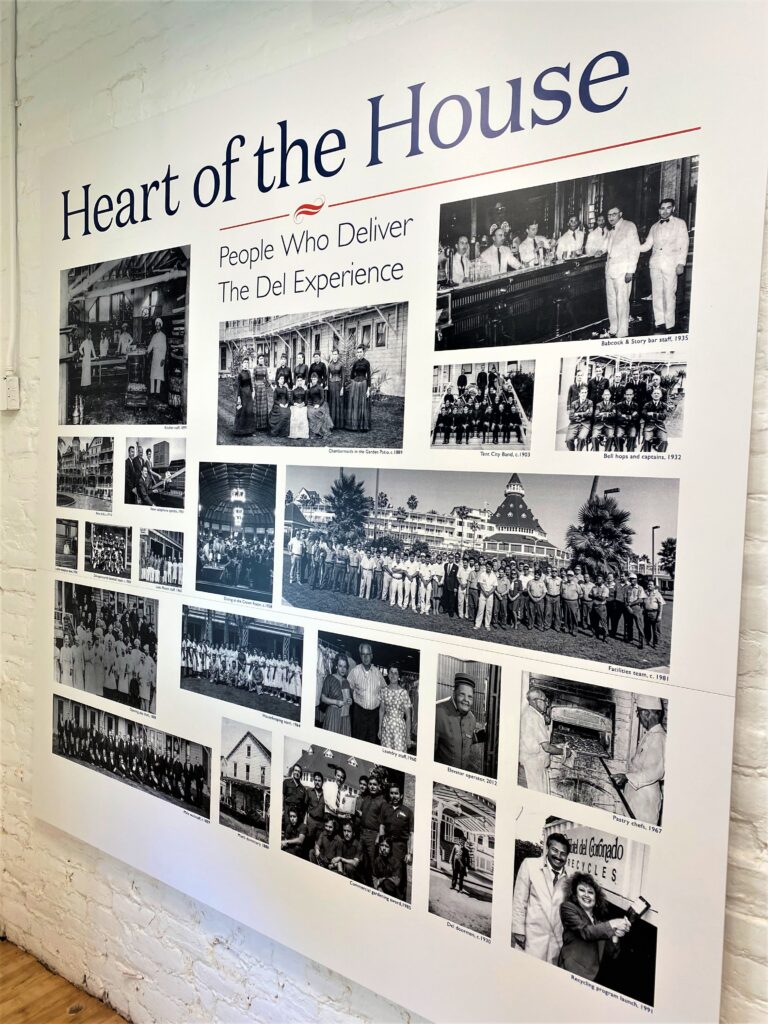 We can’t forget about the colorful Tent City history from 1900 to 1938. Subsidized by John D. Spreckels, in 1914 there were 10,000 people staying there. It appears to have been a precursor to the glamping of today and came unfurnished or furnished with retired hotel furniture. 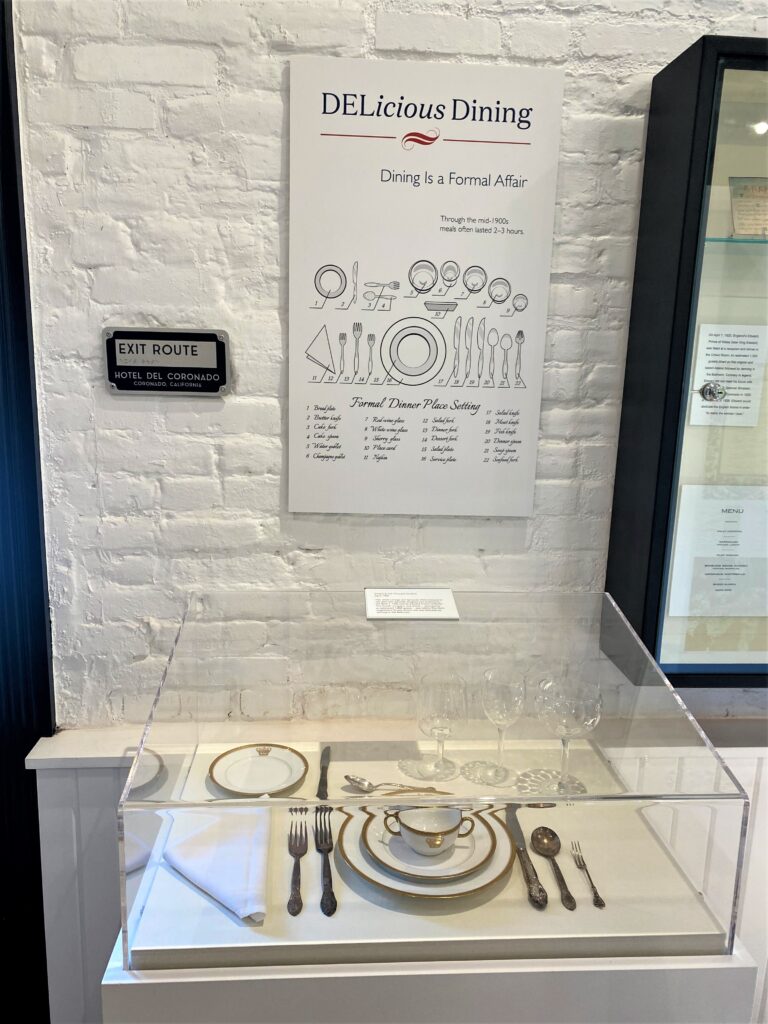 Petrone has been with The Del for ten years and is in charge of all things historical. The extensive archive contains a treasure trove of original Babcock letters, menus, guest registers, and much more, and they are starting to digitize the collection. She noted that they are collaborating with the Coronado Historical Association (CHA) and the Coronado Public Library to share assets and make the collection more accessible.

With the recent opening of the Ice House Museum, Petrone says, “We are grateful to have a dedicated space to put the artifacts in. It’s nice to showcase actual historical pieces and be able to show them in pictures.” 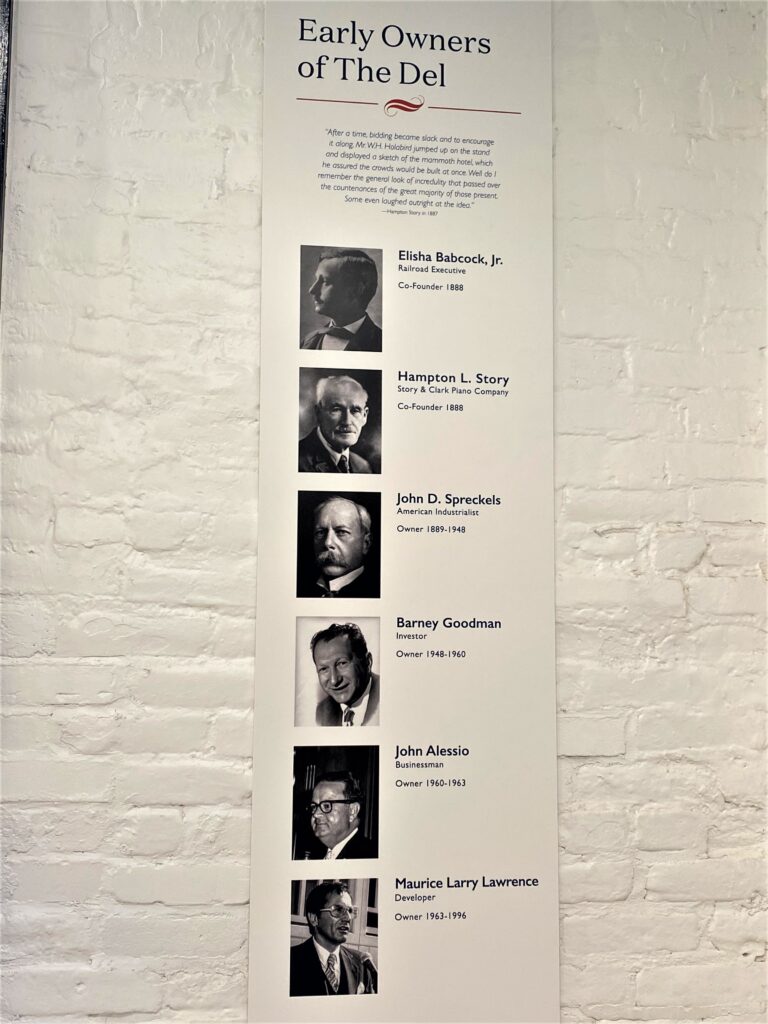