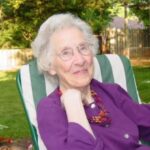 Helen Baker Gelzer, age 103 passed away peacefully Monday, June 28, 2021. Raised in Haddonfield, New Jersey, Helen attended Randolph-Macon Women’s College (now Randolph College). She married John R. Gelzer on February 8, 1941. They raised four daughters and enjoyed 59 years together prior to his passing in 2000. She and her husband John eventually settled in Columbus, Ohio where John started Gelzer Systems Company and the couple worked alongside each other to run the business. She was active in the League of Women Voters for many years and a supporter of the Columbus Symphony Orchestra as a member of its Canterbury Chapter. Later in life, she and John lived part-time in Palm Desert, California where they developed many treasured friendships.

A homemaker for much of her adult life, she was a nurturer of both people and plants. She opened her heart and home to others freely and there were often extra seats at the table for people from many different walks of life who became “honorary members” of the Gelzer clan. She was an extraordinary gardener, embracing organic gardening decades before it became popular. She passed along this passion to her daughters.

Throughout her long life, she was intellectually curious about everything, passionate about politics, outspoken and tons of fun. She was always reading, always thinking, and always growing. An avid bridge player her whole adult life, she embraced yoga in her sixties and taught herself to paint in her seventies. She left us with an amazing legacy of how to live life.

Survived by daughters Barbara Gelzer, Helen (Sig) Kupka, and Katherine (Richard) Murphy, and grandsons Jon Magnuson and Matthew Murphy. Predeceased by her husband John, daughter Jay Gelzer, and grandson Connor Ireland. She will be remembered and celebrated privately by her family. In lieu of flowers, donations may be made to the Columbus Symphony Orchestra.