During Thursday, April 15th prelims David swam the 100 meter breaststroke posting a time of 1:04.14 breaking the Para Swimming American Record. Returning for finals Abrahams broke his own record with a time of 1:04.07, posting the fastest time in the world for his category in the 100 meter breaststroke. Abrahams is a visually impaired swimmer, classified as a SB-13 athlete, the least restrictive group for visual impairment. Abrahams has his heart set on breaking the current World Record of 1:03.58 set back in 2013 at Para Olympic Trials this June. 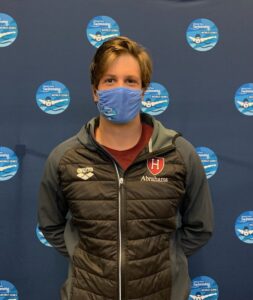 “We are very proud of all the hard work Abrahams has displayed during his time here in Coronado” Coach Marsh, Team Elite Head Coach and CSTE’s Program Director. “Abrahams has done a tremendous job staying focused, he’s been making minor stroke adjustments that will pay dividends for him in June. We are excited to watch him race at the Para Olympic Trials.”

President of CSTE, Peter McVey said, “We are thrilled to watch the hard work and dedication of David materialize into such an amazing accomplishment, I can not wait to see what he does at Paralympic Trials and potentially for Team USA in Tokyo.”

Helping to foster well-rounded excellence, Coronado Swim Association – Team Elite believes in providing a technique-focused swimming environment that encourages its athletes to reach their full potential, both in and out of the pool. For more information and to contact CSTE visit their website www.swimcoronado.org or you can follow CSTE on INSTAGRAM @swimcoronado or on Facebook @coronadoswimming.

Coronado Swim Association- Team Elite (CSTE) is a 501(c)(3) nonprofit competitive swim team and a proud member of the USA Swimming organization. Since 1963 (Originally CNSA) CSTE’s professional coaching staff has offered unmatched technical instruction and year-round training for all ages, from beginner to elite level swimmers. Catering to Coronado and its surrounding neighborhoods, CSTE prides itself on providing an atmosphere that inspires character, excellence, and confidence. In Fall of 2020 CSA partnered with a La Jolla based program Team Elite Stingrays, giving CSTE a southern and northern training program, forging Coronado Swim Association-Team Elite as the premier swimming program in all of San Diego.