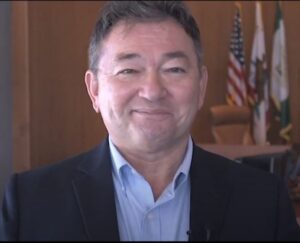 One month shy of eleven years, City Manager Blair King will leave his position in Coronado on April 29, and head to Bainbridge Island, Washington to take over as the City Manager there. With 36 years of local government experience, 25 of those as a City Manager, in Imperial Beach, Lodi, Half Moon Bay, and Soledad, King brought an extensive skill set to overseeing the complex issues required to successfully oversee city government here in Coronado. King was selected for his new position from a field of 66 applicants and is looking forward to being closer to family. He took a few moments to reflect on his time here from beginning to end, and details crucial issues for Coronado’s continued future success.

Thinking back, what was the main reason that tipped the scale for you in deciding to come to Coronado as City Manager?

I was the city manager of Imperial Beach in the mid-90s. At that time, we very much enjoyed visiting Coronado. In late 2009, an executive recruiter contacted me about my interest in another larger city. I was not interested. At the end of our conversation, more as a throwaway comment, he said he was recruiting for Coronado also. I said I was very interested, and the rest is history.

What was your biggest challenge or challenges during your tenure?

What are the unique issues that a city manager in Coronado faces?

What are a few of the accomplishments of which you are most proud?

I am pleased that we maintained the trajectory of the city as a financially strong municipal cooperation. We have established specific reserves for the replacement of major facilities and to stabilize pension costs. I am proud of how we managed the dissolution of Redevelopment and won the lawsuit against the State of California. I am pleased to see the arts community continue to thrive. We have been able to kick-off a variety of transportation improvements and initiate new initiatives for sustainability. But most importantly, in the face of significant pressure, the essence of Coronado, a beautiful small-town beach community, has been maintained.

What are some key projects that are still in the works?

The Recycled Water Plant is a complex project that is important to the city over the long-term. Relinquishment of State Routes 75 and 282 took an unexpected turn and is still pending a final outcome. I hope it is getting back on track. The Parker Pump Station needs to be rebuilt. How Coronado will address the Regional Housing Needs Allocation is a real mystery. The Cays Park rehabilitation needs to be completed. On the horizon is the redevelopment of Coronado’s two Fire Stations. The Climate Action Plan is nearing approval and then implementation. The Hotel del Coronado’s Master Plan Development project took years to get to this point and is about a year and a half away from completion.

Can you talk about working with city staff in running the city?

Cities deliver services via people, equipment, and facilities. Of these three elements, human resources is the most unpredictable and fun. Coronado has a solid staff. We attract experienced job applicants. The City of Coronado’s work force is held to a high standard and the public should be very proud of the City of Coronado’s employees.

This past year, with the pandemic, has been especially challenging, can you give us a brief overview of how the city will come out of this?

Working in the era of COVID has indeed been challenging. Society has been disrupted. For Coronado, our tax revenue, specifically Transient Occupancy Tax, declined significantly. We needed to respond and watch our financial condition carefully. Simultaneously, we offered help to the community. Loans were offered to selected businesses. We made allowances for outdoor dining and pick-up locations. We used Spreckels Park as a community picnic site. Coronado worked to protect the public’s safety. We purchased and gave away face masks to encourage wearing of face masks. We followed County direction to close parking lots and facilities, and then open facilities and parking lots. We established special lines of communication to inform the public. We established a community testing site, and then worked with Sharp Hospital to open a community vaccination clinic. All of these COVID related tasks were in addition to the “normal” workload of the municipal corporation. Coronado’s response to the COVID crisis is something the community of Coronado again should be very proud of.

What do you think is the most important quality for a city manager?

To maintain perspective; empathy; and the ability to pick and choose your battles.

What are the biggest issues the new city manager will face for the future and what is the recruitment process?

Coronado and the next city manager are going to be challenged with maintaining local land use control. This is by far, the biggest threat to Coronado.

City Spokesperson Janine Zúñiga said this about the recruitment process, “An interim city manager will be announced soon. An executive recruitment firm will be engaged to assist with the search for Coronado’s next city manager.  I expect a smooth transition with minimal disruption. Coronado has a strong and capable staff.

What are three of your favorite places in Coronado?

I love Coronado and/or Strand Beach on a stormy winter’s day when the beach is vacant, the ocean is angry, and the waves are pounding on the beach. The Ferry Landing in the off season, looking across at the downtown San Diego skyline.  Orange Avenue during the Fourth of July parade.

What favorite memories will your wife Nancy and your daughters take away?

Just off the top of my head, I’d say that my wife and I will always remember the Carrier Classic. I have fond memories of watching our daughter while she was cheerleading (the Point-Loma Basketball game was a lot of fun) and traveling to watch the Coronado High School sailing team regattas. My wife was the volunteer children’s choir director at Saint Paul’s Church. She remembers every child who was in her choir. Our favorite community function every year was the Military Ball, and we have so many memories of many community celebrations and functions.

What will you miss most in Coronado?

Our friends from church, clubs, neighbors, and professional colleagues.

Coronado has a history of sound management. I am pleased that I could be a part of that legacy. Coronado is a premier community and will continue to be unique and special.

King will be greatly missed by colleagues and friends alike. He was given a standing ovation by the mayor, councilmembers, and audience at the March 16 council meeting where he formerly announced his resignation. Everyone thanked him for his outstanding service and wished him the best in his new endeavor.  Former Councilmember Michael Woiwode said, “The most important task of the City Council is that of hiring the City Manager. He’s the CEO of the municipal corporation, charged with running the city in accordance with policy set by the City Council. In my eight years on City Council, helping select Blair was the most important action taken. It was also the best decision we made. He’s been an exemplary City Manager. The current council faces the daunting task of selecting his replacement. The good news is that, having worked with Blair, they know what a great City Manager looks like. I always found Blair approachable, knowledgeable, straightforward, and willing to tackle the toughest issues. I will miss him.”

In a press statement sent out by the city, Mayor Richard Bailey commented, “Blair’s accomplishments are significant, wide-ranging and will have an enduring impact on this community for generations to come. I know I speak for the entire council when I express gratitude for Blair’s dedicated skilled leadership. He will be missed, and we wish him the best in his new role.”