The City of Coronado was named Emerald Keeper of the Month by President Amy Steward, along with Board Members Ginger Cox and Christina Slentz who highlighted the many ways the city is taking measures to help the environment with sustainable practices including green LEED building designation, a clean marina, 14 electric vehicle charging stations, supporting computer ferry service and Orange Avenue banners, more than a dozen water bottle refilling stations, LED lighting in public buildings, water savings, and more.

Mayor Bailey presented a proclamation via Zoom to Carol Dedrich from the Girl Scouts of San Diego, naming March 7 through 13 as “Girl Scout Week.” Dedrich commented that the Coronado Girl Scouts are exceptionally led by Melissa Bennett and her extraordinary team. This past year has been especially challenging with COVID, but she noted that “the girls have persevered and are resilient.” She mentioned that this is the 20th anniversary of Operation Thin Mint which has provided more than 3.25 million boxes of delicious cookies and handwritten notes to service members. A heart felt video, showcasing the Coronado Girl Scouts capped off the presentation.

City Manager Blair King commended City Clerk Jennifer Ekblad for her recent completion of two certifications, which will advance her knowledge and career. The first was Master Municipal Clerk from the International Institute of Municipal Clerks, and the second was Certified Public Manager from Arizona State University. “We are pleased to have her on our Super Bowl winning staff team,” commented King. The Mayor chimed in that she is the, “Tom Brady of City Clerks.”

The council unanimously approved an ordinance clarifying that new development projects which include both a new single family residence and an accessory dwelling unit (ADU) are required to comply with floor area ratios (FAR) and other applicable development standards. This is a follow-up from the February 9 council meeting, and city staff cited that “the ordinance amendment would not introduce any new or modified standards or regulations. It would merely codify the city’s existing practice to enforce adopted residential development standards for projects proposing new single family homes simultaneously with ADUs while making the applicable requirements clearer to property owners and their consultants. The new language will provide greater transparency into the city’s process for staff, applicants, and residents.”

Matthew Gelfand, in-house litigator for the Californians for Homeownership, a nonprofit organization sponsored by the California Association of Realtors (CAR), spoke via Zoom about the lawsuit they filed in January against the city citing that the ordinance was unlawful. He noted that they have reviewed ordinances in more than 200 cities in California, and they feel this goes against state policies. Before the vote, Mayor Bailey asked City Attorney Johanna Canlas if this ordinance was in compliance with state laws and she said that it is.

The council appointed several new members to various committees during this meeting.  The first was the Cultural Arts Commission (CAC) for which Teresa Espaniola and Lainie Reuter applied. The council approved Espaniola, who spoke via Zoom, to serve the remainder of the term expiring December 31, 2021. The second was the Historic Resource Commission (HRC) who had three applicants: Michael Tontz, Suzanne Heap, and Mary Farley. Farley, who gave her credentials via Zoom, was selected to serve the remaining term. Finally, the council appointed Mary Berube to the Street Tree Committee to serve until October 31. 2023. She talked via Zoom about her work in helping restore Grand Caribe Park in the Cays and other accomplishments. The field of applicants also included Shannon Player, Daniel Hunting, Richard Tugend, and Lynn Hamilton. The mayor thanked all the qualified applicants for their willingness to serve and encouraged them to apply for future positions. Also, with regards to board terms, on the consent calendar the council approved a one-time extension of board, commission, and committee member terms due to the COVID-19 pandemic.

Unsheltered in Coronado was a presentation given by King and Police Chief Chuck Kaye regarding the plan of dealing with the homeless in town with compassion and enforcement. The city’s concerns focus on the humanitarian aspects and quality of life issues for residents and businesses. In 2020, the city entered into an agreement with St. Vincent de Paul to provide a bed and basic services, three meals a day, laundry, wash station, recreation, employment and education services, and access to health services. So far, the police have taken 11 people to utilize this service, and King said they are looking at adding a second bed in the future. King noted that the cost is $3,802 per month and is paid from the Successor Agency Housing funds.

“This has worked out very well and allows us to enforce by providing a bed,” he commented, and added that lack of state resources has forced local governments to use their own resources. Kaye said that his officers were grateful to have this bed option. 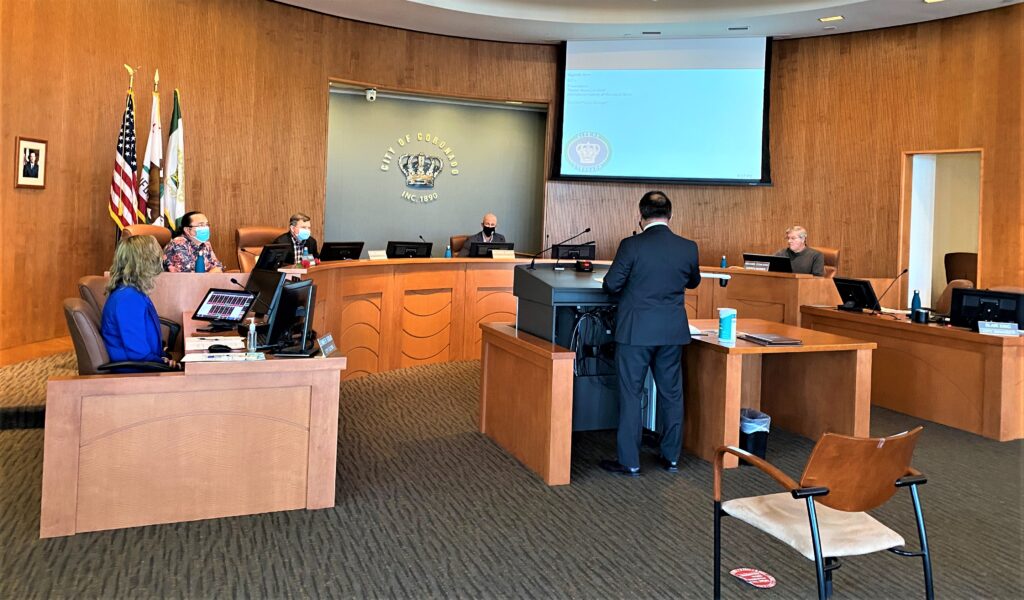 Lastly, King presented 54 projects on the 2021 City Workload List to show the council and the public an overview of what city staff are currently working on. He noted that “the workload is expansive, and staff are maxed out and need to get some of these things out of the way before taking on new projects.”

For the complete list of the 54 project, open the PDF here.

Interim City Manager, recognitions, home building projects, utility undergrounding, and Orange Avenue improvements were among the items discussed and voted on at the April...
Read more
City of Coronado

Mary Jane Osmeña Perry, Commander, USN (Ret), passed away on April 6, 2021 at the age of 53.Born into a Navy family on September...
Read more

At the council meeting on March 16, City Manager Blair King announced his resignation as of April 29, and he presented flowers to his...
Read more
Business

Building a new home is an exciting endeavor, and it typically takes months to see significant progress. But a new construction project at the...
Read more
Advertisement
Sponsored Partner Links