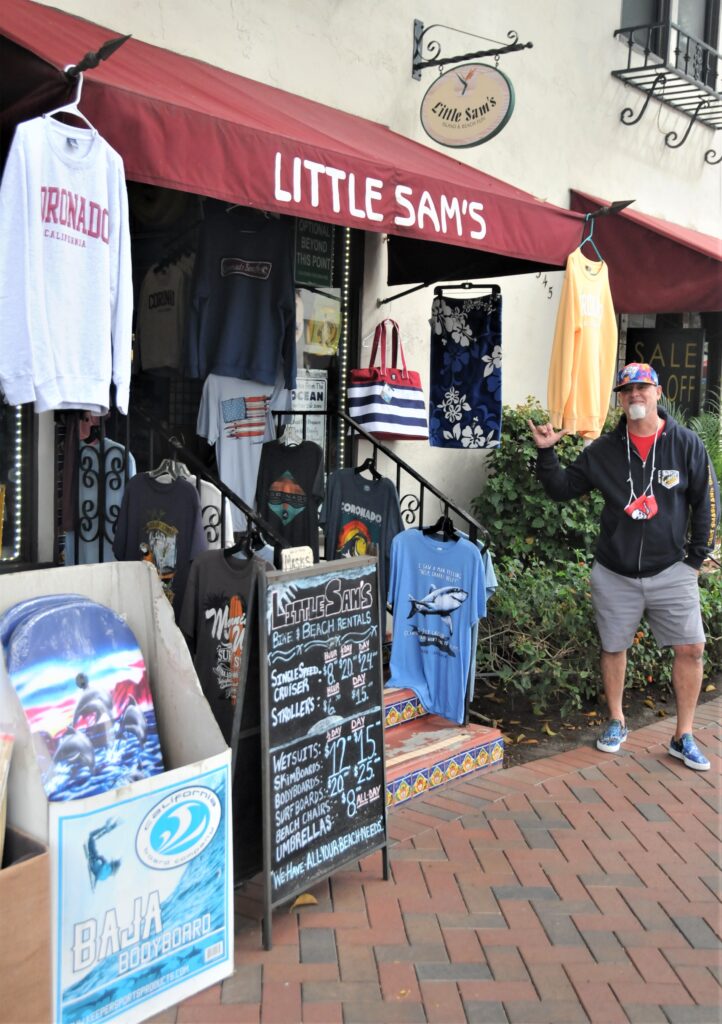 You never know who will walk in the door at Little Sam’s Island and Beach Fun says owner Sam Frederick, who took over the shop and renamed it, after working as the manager when it was previously Mike’s Bikes in the early ’90s. With 95 percent of his business from tourists, Sam has seen less east coast customers during the pandemic and more from Orange County, Northern California, Utah, and Nevada. Over the years, many celebrities and famous athletes have passed through his store while visiting Coronado, but Sam treats everyone the same and greets them all with his gregarious charm. 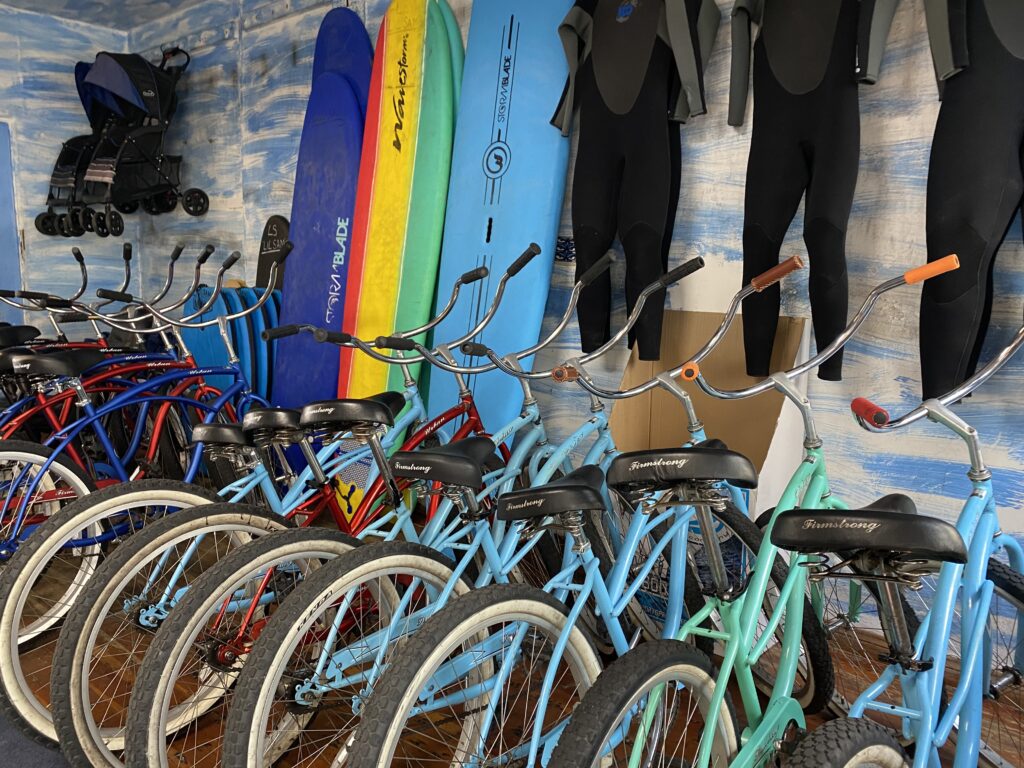 “The little beach shack,” as he likes to call it, is his life, and he rents everything from bikes, surfboards, boogie boards, skim boards, and wetsuits, to beach chairs, umbrellas, and strollers, with rentals by the hour or the day. He also has a retail side and sells beach chairs and umbrellas, beach toys and games, Coronado tees and sweatshirts, sunscreen, sunglasses, hats, souvenirs, and more recently, colorful masks.

Since he started, Sam had never missed a day opening his shop, until the pandemic hit.  He vividly remembers he was closed from April 6 through May 6, and says he nearly went bonkers as he worried and waited to see if his business would survive. “This was all I knew. I’m not a materialistic or big change guy. I prefer things old school, so I didn’t have a clue what the outcome would be,” he comments. He is thankful for the loan from the city and was impressed with the ease of the process. Currently, his son, who graduated from CHS in 2020, helps him in the shop, and many Coronado teens have worked for him throughout his many years in business.

After the initial pandemic panic, he figured out additional sanitization procedures for his rental items. He found that once he reopened on May 6, each month got better and better, as people needed to get outside, and tourists started returning to our ideal climate to bike and enjoy the beach. “I’m stoked that we were way up in rentals for July through November 2020 over [the same period in] 2019,” he said. But just as he began to feel good about the comeback, his business was hit hard again during the second lockdown, and only saw decent business on holiday weekends, when there was also good weather. He hopes things will continue back on an upswing with spring and summer coming. 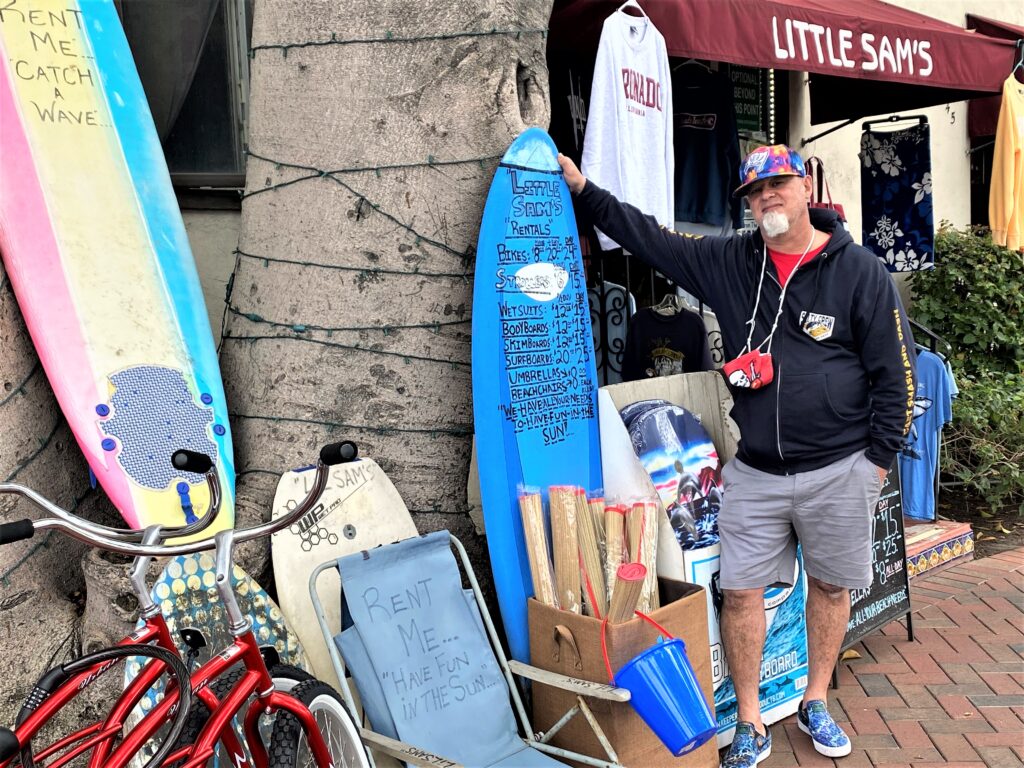 Little Sam’s is one of the longest original-owner-owned businesses in Coronado, having been here since 1993. He sees light at the end of the COVID tunnel, but says as much as he loves living and owning a business here, he doesn’t see himself here forever. He appreciates the climate, which is conducive to his love of paddle boarding, but someday wants to seek adventures in forests and near lakes, so his future plans include getting in an RV and travelling around the U.S.

Located just a block from The Del and the ocean, Little Sam’s is located in the El Cordova Hotel complex at 1343 Orange Avenue. With no social media or website (he’s “old school”), Little Sam’s is best reached by phone at 619-435-4068, or just stop in between 9am and 5pm.

With the recent reduction in COVID-19 restrictions and the expansion of vaccinations, City of Coronado staff is making the following updates to various schedules:...
Read more