San Diego has seen an outbreak of a bacterial infection among dogs that is called leptospirosis. The San Diego Country of Health and Human Services recently sent an advisory of the outbreak to local physicians and veterinarians. 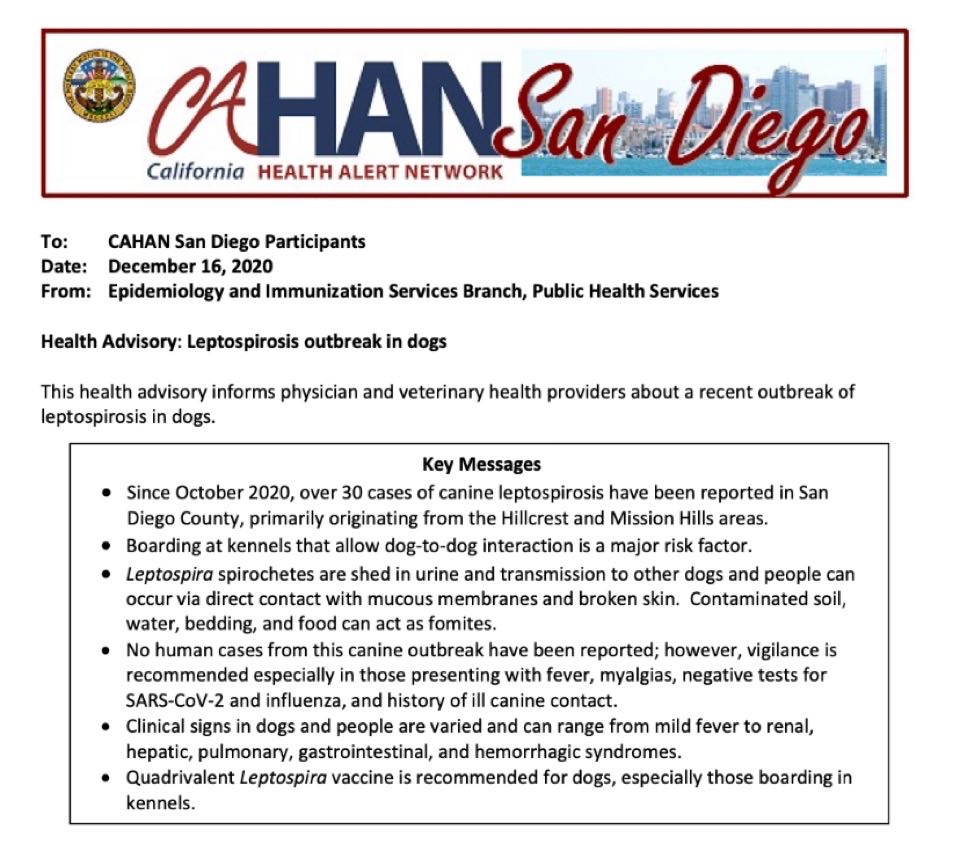 Since October 2020, 34 cases have been reported, primarily in the Hillcrest and Mission Hills areas. As of December 22, Coronado does not have any confirmed cases. However, Coronado veterinarians are encouraging pet owners to be aware and cautious of this contagious bacteria.

Purple Paws Pet Clinic in Coronado shared, “Owners can take dogs anywhere as long as the necessary precautions are being made.” Primarily, owners should be vigilant to ensure pets do not eat or drink anything off the streets.

Leptospirosis is a bacterial blood infection spread through the urine of infected animals. According to VCA Animal Hospitals, “If your pet drinks out of a collected water source such as a puddle, pond or lake, they can get the virus. They can also get it just by walking where an animal has urinated then licking their paws.” Several San Diego dogs have been hospitalized and one dog was euthanized due to the infection. Younger animals are more affected than older animals.

Symptoms of the leptospirosis infection can include:

If your pet displays any of the symptoms listed above, owners are advised to call their veterinarian immediately.

According to the County of San Diego, “These bacteria can infect multiple species of mammals, including humans, dogs, rats, mice, raccoons, skunks, and opossums.  The bacteria are shed in the urine of infected animals and may contaminate food, water, soil or bedding. Dogs and people can get infected through direct contact with skin abrasions, mucous membranes, or drinking contaminated water.”

A major risk area for exposure to leptospirosis is kennels. The majority of the San Diego cases have come from kennels. “When dogs visit kennels and parks and play, lick, and sniff each other, they are at risk of getting these bacteria,” said Wilma Wooten, M.D., M.P.H., San Diego County public health officer.

Fortunately, there is a vaccine for Leptospirosis that can be administered at both Coronado vets: Purple Paws Pet Clinic and Coronado Veterinary Hospital. Immunity requires an initial vaccine followed by a booster vaccine 2 to 4 weeks later. The vaccine is not part of the core vaccines, but is highly recommended for any pets expected to board at a kennel.

While humans and other animals can be infected by the leptospirosis bacteria, there have not been any reported human cases.

Coronado's Gavin Serna (age 7), along with Pack 122, is raising money for the San Diego Food Bank. Gavin is a Wolf Scout and...
Read more
Community News

The City of Coronado has been making measurable contributions to reduce energy and greenhouse gas emissions. They are working toward implementing sustainable best...
Read more

A total of 486 students, representing 16% of the student body, left the Coronado Unified School District (CUSD) between the start of the Spring...
Read more
Community News