Binational ‘Meeting of the Minds’ on TRV Contamination

July 15, 2020 2:30pm – This article has been edited from the original to remove the statement that the San Diego Regional Water Quality Control Board and California Environmental Protection Agency were in attendance at the meeting, they were not.

California State Senator Ben Hueso (D-San Diego) convened a half-day meeting at the South Bay International Wastewater Treatment Plant on July 9, 2020 between officials from both sides of the border to discuss the binational efforts that are underway to stem the flow of toxic wastewater in the Tijuana River Valley. 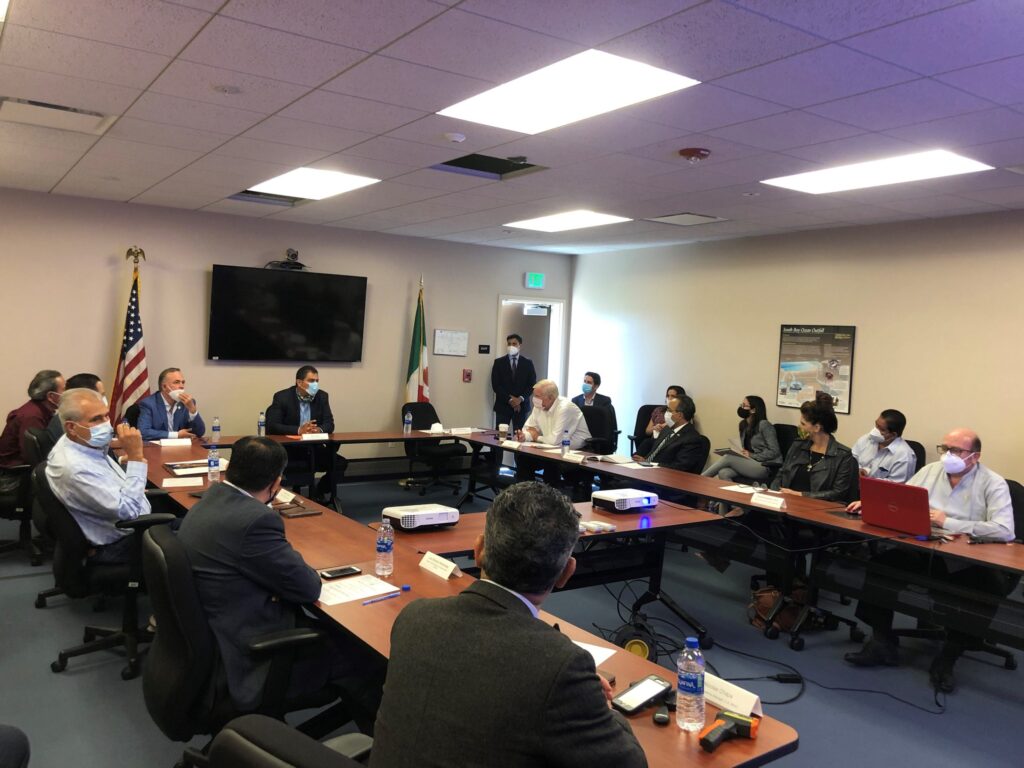 Sen. Hueso kicked off the meeting by discussing efforts underway in the US and funding recently secured by colleagues in the State Legislature and US House of Representatives, including a $300 million allocation in the USMCA to fund projects outlined in the County of San Diego’s needs assessment (commissioned by Sen. Hueso’s SB 507 from 2017). He also shared that the California Senate recently passed his bill, SB 1301, which would direct the San Diego River Conservancy to create a Binational Watershed Management Plan for the Tijuana River Valley. A binational watershed management plan will help to create an ecosystem-based strategy to conserve, restore, and protect the Tijuana River Valley and enhance the overall health of the watershed while addressing transboundary flows of pollution across the border through goals, timelines, and potential action items.

Next was a presentation by Rigoberto Laborin, Director of State Public Utility Commission of Tijuana, about the Mexican government’s planned infrastructure development efforts along the Tijuana River and their efforts to mitigate trans-boundary sewage flows affecting the City of Imperial Beach. The State Public Utilities Commission of Tijuana announced the procurement of three new effluent pumps to replace the outdated infrastructure currently in place. Tijuana’s water agency confirmed the replacement of three existing pumping stations with the newly acquired pumping systems in order to re-direct contaminated flows to the Punta Bandera Effluent Outfall, located more than 12 kilometers south of Imperial Beach. This diversion of untreated waters to a more southern location would result in a short-term solution to the sewage discharge affecting Imperial Beach, as discharge would not be close enough to contaminate the city’s coastline and beaches, as well as diminishing the contamination to the Tijuana River Estuary. Director Laborin stated that his agency’s work of replacing and installing the newly acquired effluent pumps is underway, with a project termination date of July 20 of this year.

At the conclusion of presentations, attendees took a tour of the South Bay International Wastewater Treatment Plant led by Nicolas Chapa, Area Operations Manager for the U.S. International Boundary and Water Commission (USIBWC). The tour took them through the operations of the facility, which is a secondary treatment plant located in San Diego County about 2 miles west of the San Ysidro Port of Entry. The plant treats 25 million gallons of sewage originating in Tijuana per day, and discharges it to the Pacific Ocean through the South Bay Ocean Outfall.

“Everyone in attendance recognizes the need to take decisive actions to bring a solution to this decades-old problem affecting both our countries,” said Sen. Hueso. “It is imperative for governments of both Mexico and the United States to share efforts in this common objective. The State of California and our local cities have been carrying the weight for far too long, so I am happy to see that Mexico is making progress toward their commitments with the repairs being completed this month.”

Sen. Hueso represents the 40th Senate District, which encompasses the entirety of California’s border with Mexico, and serves as Chair of the Senate Select Committee on California-Mexico Cooperation.

A VA home loan is a $0-down mortgage option that is issued by private lenders and partially backed by the Department of Veterans Affairs...
Read more

Due to a slowing of appointments at COVID-19 vaccination sites, the County of San Diego today expanded the category of those eligible to include...
Read more
Advertisement
Advertise Here (Get Rates)