The Man Behind the Mask: How Brad Willis Faced Off the COVID-19 Crisis with the CoroMask Campaign

Brad Willis is no stranger to crisis or pandemics. As an award-winning journalist and former international news correspondent working in war-torn regions of Afghanistan, Iraq, and Africa, Brad knows that illness is something to be taken seriously.

“I’ve been in Afghan and Iraqi refugee camps where mass illness broke out due to lack of sanitation,” says Brad. “A lot of people died. Having worked in Africa, I followed the Ebola crisis closely.”

But the longtime Coronado resident never imagined it could happen here.

“I knew pandemics were devastating, but I never really pondered the likelihood of it happening here,” says Brad. “It has been sobering.”

Brad–who is also the current acting Coronado Public Arts Commissioner–was very involved in the social media movement to close local beaches. He even consulted with the contagious disease expert he worked with when he was a war correspondent. When the beaches finally closed after much tumultuous debate, Brad wanted to bring the community together in a positive way.

“I immediately thought of a fundraiser for free mask distribution,” says Brad. “I put up a FaceBook Fundraiser with a $1,000 goal, and within 24 hours the wonderful citizens of Coronado had donated $2,000. I called it the CoroMask campaign.”

“In total, 130 residents donated to the campaign,” says Brad. “I was so proud of Coronado when so many residents responded with their generous donations.”

But he didn’t do it alone.

“We purchased masks from Stitch Studios, FiveLoaves TwoFish, and Stephanie Basden who made them in her home,” says Brad. “Steve Albert, whose wife owns the flower stand at Rotary Park, has been amazing, making graphics for us and volunteering to pass out masks and direct traffic during our distributions.”

According to Steve, he knew there was a big opportunity to help the small island community when he saw the experts reverse their position in regards to the general public wearing masks. 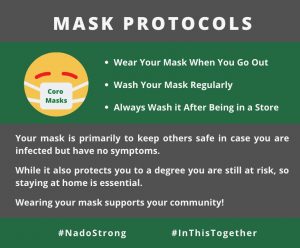 “Brad was one step ahead, so I jumped in with him and offered some graphic design services to help get the word out,” says Steve, who also volunteered to pass out masks at the distribution sites. “It sure beats sitting helplessly on the couch, watching scary news reports.”

Steve saw first-hand the thankful expressions on the residents faces.

“I saw a lot of relieved and grateful faces, especially on the elderly folks who came out for the first run,” says Steve. “I think the vast majority of Islanders wanted to follow directions and stay safe. But they didn’t know how they were going to accomplish that goal with no access to masks.” 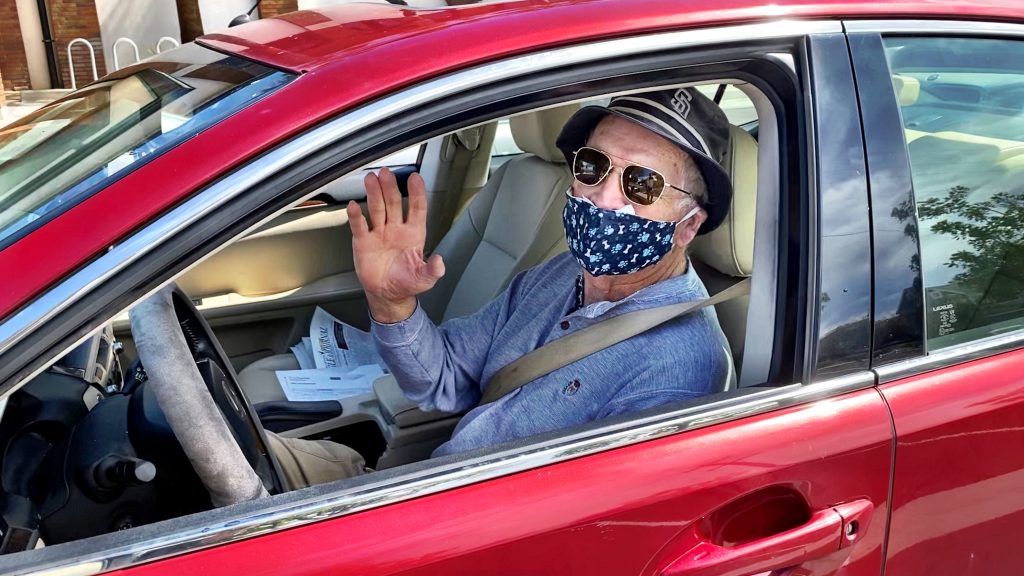 Even the police got in on the action.

In addition, Brad’s family–his wife Laura Plumb, and son, 22-year-old Morgan Willis–were very supportive. His son even helped him pass out masks at the big distribution day at the CHS parking lot in the rain.

“Everyone was extremely grateful,” says Brad. “They felt a community spirit, and this gave them hope and protection for themselves and other residents.”

Music teacher and vocalist Lisa Solis and her daughter Gabi were just two Coronado residents excited to get their masks at one of the distribution sites.

“We want to do all we can to keep ourselves and others safe,” says Lisa. “And when we got to the area to pick up the masks, I was so filled with a sense of gratitude towards Brad for empowering the community to be safe, and organizing all of the wonderful volunteers who were so full of joy and purpose and so happy to take care of us.”

But that doesn’t mean there weren’t some bumps in the road. When Brad initially set up the ropes on Orange Avenue for the first distribution, he was approached by a police officer.

“I thought, ‘oh no! This is going to be over before we start, and I’m going to get in trouble,'” says Brad. “Luckily, the officer relayed what was going on, and the Coronado Police got behind the campaign 100%.”

Another day, a car broke down in one of the two distribution lanes where hundreds of cars waited. “We had to push it out of there immediately before those behind got upset,” says Brad.

Although the campaign was stressful at times, Brad will always remember how the community came together.

“The CoroMask Campaign has consumed all my time from morning to night since I launched it,” says Brad. “I felt tired a few times, but I mostly felt invigorated by all the wonderful volunteers and recipients. It was so gratifying to see the community come together over this.”

“For me, it’s an amazing feeling to give back to this community, which has helped my family numerous times when we’ve been down and out,” says Steve. “I’m definitely going to remember the selflessness and generosity of our super citizens who stepped up and made lemonade out the mountain of lemons we were dealt. It’s easy to sit behind a keyboard and complain, but it’s a special thing to behold when you can collaborate with people who put others first and ask for nothing in return.”

Although California is in quarantine until further notice, Brad says his family is making the most of it.

“The silver lining for me is the increased time with my family, the silence in the community, and the remembrance of what is truly important: family, friends, and community service,” says Brad.

His son, Morgan, graduates from the Walter Cronkite School of Journalism and Mass Communications this year. Like most graduating students, his graduation ceremony is cancelled. As a Dean’s List student who has worked several non-profit jobs with an impressive resume, he was on his way to a great job. Although it has dissolved for now, Brad says Morgan has handled it “beautifully.”

Brad’s wife, Laura, is a practitioner of Ayurvedic Medicine and works from home when not traveling leading workshops and retreats here and abroad.

“She has been able to help and inspire so many via her webinars and online counseling,” says Brad. “I’m so proud of her.”

When all this is over, and he looks back on the COVID-19 crisis, Brad says he will remember the enduring spirit of the community and our nation as a whole.

“I’ll remember how beautifully Coronado came together, and the amazing Front Line Health Heroes across the nation risking their lives and sometimes sadly losing their lives fighting this pandemic and caring for so many victims,” says Brad. “From now on whenever I encounter a nurse, a hospital worker, or an emergency room doctor, I’ll tell them from my heart, ‘Thank you for your service.'”

Thank you Brad, for YOUR service. 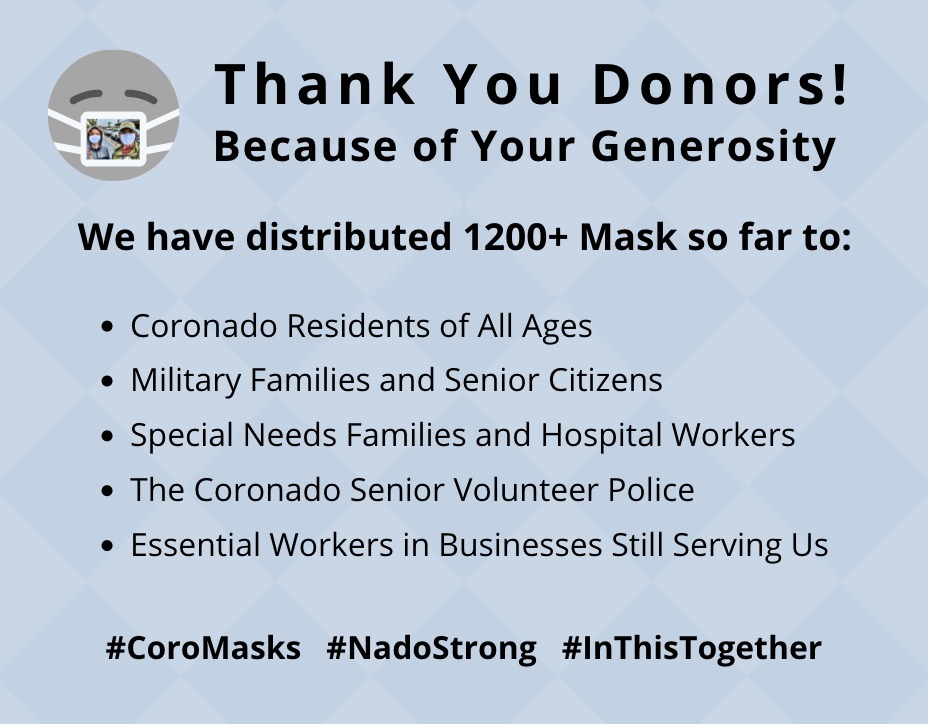 What does it take to get accepted to Princeton, graduate a tennis star with a 4.65 GPA, and earn the title of Salutatorian? Just...
Read more
Entertainment

Coronado resident Barbara McNally knows a thing or two about determination. In fact, it’s taken her over a decade to write her book, Four...
Read more
Business

Starting a personal concierge and errand-running service was something Emily Parker had on her mind for a long time. In fact, she—along with her...
Read more
Business

Feel like getting perky (or porky)? Your favorite chatty chums are ready to serve up everything from a chai latte at Coronado Coffee Company,...
Read more
People

Chapped lips, grey roots, and dull skin, oh my! Not exactly the stuff of your wildest beauty dreams. The quarantine has got many of...
Read more
Advertisement
Advertise Here (Get Rates)