NOTE:  THIS EVENT HAS BEEN CANCELLED

Note:  In just a few hours from Coronado, you can be watching the top tennis players in the world. 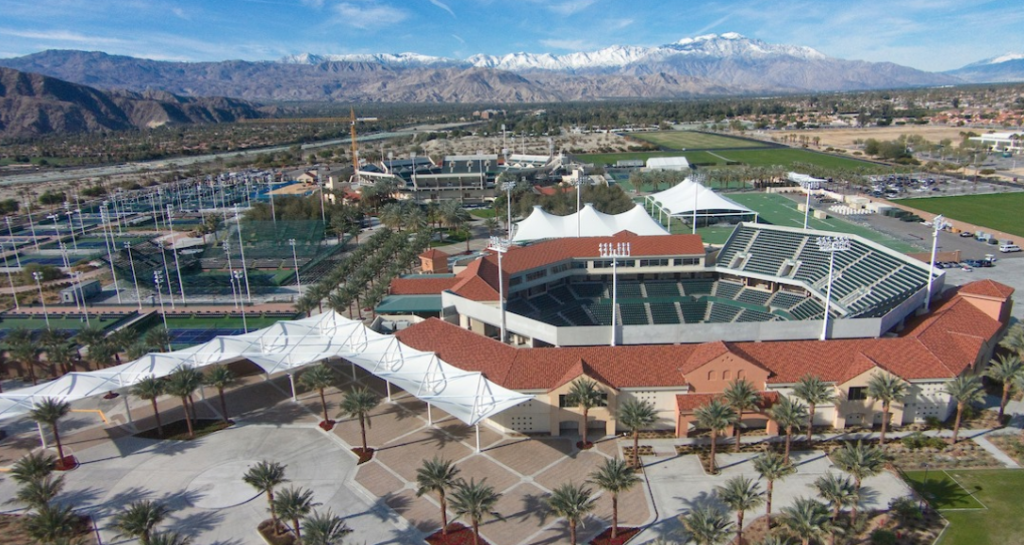 Tennis Season has officially arrived in the Coachella Valley, and the BNP Paribas Open is ready to welcome fans to Tennis Paradise with a host of festivities leading up to and during the largest combined ATP and WTA tournament in the world, to be held March 9-22.

This year, the BNP Paribas Open welcomes new partner Motorola as the Official Smartphone Partner of the tournament, as well as the presenting partner of the Official 2020 BNP Paribas Open Mobile App, now available for download in the App Store (Apple) and Google Play Store (Android). Motorola will have an activation booth on-site throughout the tournament where fans can learn about the all-new, re-imagined Motorola razr.

Also new in 2020, Audi– the Official Luxury Vehicle of the BNP Paribas Open – will invite fans to test drive their new, all-electric e-tron. Throughout the event, fans can sign up at the Audi activation space on-site to take the e-tron for a test drive around the area. Audi will also continue their popular ping-pong fan activation in front of Stadium 2, where solar phone charging stations will also be available.

For fans who can’t wait until March 9 to get their fill of professional tennis action, the Oracle Challenger Series returns to the Indian Wells Tennis Garden from March 2 – 8. This combined ATP Challenger Tour and WTA 125K event features nearly 30 Top 100-ranked players, including former Top 10 player Lucas Pouille and 2011 US Open Champion Samantha Stosur, as well as a strong contingent of hungry Americans such as Frances Tiafoe, Steve Johnson, Jessica Pegula, Taylor Townsend and more. Indian Wells is the fourth and final stop of the 2019-2020 Oracle Challenger Series, and will determine which two American men and women earn main draw wild cards into the BNP Paribas Open. The tournament is free and open to the public.

Fans are also encouraged to take advantage of free admission days on Monday, March 9 and Tuesday, March 10 as qualifying action gets underway for both the WTA and ATP Tour.

For fans who can’t get enough tennis action, be sure to check out the stars of tomorrow in the annual BNP Paribas Open Collegiate Tennis Challenge presented by Oracle (Saturday, March 21 – Sunday, March 22). Admission is free with a valid BNP Paribas Open ticket or event credential.

Guests looking for a cocktail at the Indian Wells Tennis Garden will have a host of new options this year, including Sipsmith London Dry Gin, the new Official Gin Partner of the BNP Paribas Open. They will be serving up refreshing beverages all tournament long at the Sipsmith London Bar located in the Retail Courtyard, including their signature “Smith Your Tonic.” In addition, Kim Crawford – the Official Wine Partner of the BNP Paribas Open – will have an expanded footprint at the Indian Wells Tennis Garden in 2020, with an all-new wine bar concept. The Kim Crawford Clubhouse will serve up classics such as Sauvignon Blanc, Rosé and Pinot Noir, as well as their popular signature frozen Kim Crawford Ace Frosé cocktail. Corona Premier, the Official Beer Partner of the BNP Paribas Open, will have two new locations on the Loge level of Stadium 1 this year – Corona Court and the Corona Oasis.

Möet & Chandon, the Official Champagne Partner of the BNP Paribas Open, will once again dazzle fans with their luxurious Circle of Palms Lounge located in the heart of Tennis Paradise. The lounge will feature private bottle service cabanas and a variety of Instagrammable #MoetMoment photo opportunities, including a life-sized frame, bottle tower and a Vintage Airstream. Moët & Chandon will also be serving up a brand-new signature cocktail, the Tennis Paradise Paloma, a refreshing mix of Moët & Chandon Impérial Rosé Champagne, Volcán Blanco Tequila, grapefruit juice, lime juice, honey syrup and soda water.

On Saturday, March 7, the Indian Wells Tennis Garden welcomes families with children of all ages out to the venue for the annual popular Kids Day, a free event with a host of fun activities both on and off the court. The event will feature clinics, yoga, arts and crafts, a climbing wall, live music, Harper for Kids, and special appearances by ATP Tour and WTA professional players. Kids Day festivities run from 11:00 a.m. – 2:00 p.m. and no pre-registration is required.

You won’t want to miss the official making of the draws for the 2020 BNP Paribas Open, with The Draw Party, WTA Edition (Monday, March 9 at 1:00 p.m.) and The Draw Party, ATP Edition (Tuesday, March 10 at 1:00 p.m.) both happening at Stadium Plaza. Star players will be in attendance, and you might even have the chance to participate yourself. As is BNP Paribas Open tradition, murals for defending champions Dominic Thiem and Bianca Andreescu will be unveiled during the first week of the tournament.

The popular Bank of the West Radio Live at the BNP Paribas Open is back for the 2020 tournament beginning Wednesday, March 11. Bank of the West will once again provide free earpiece radios for fans on-site to listen to live play-by-play and commentary from Tennis Channel and ESPN throughout the event. Radios will be allocated on a first-come, first-served basis at the Bank of the West activation booth on the north side of the Indian Wells Tennis Garden, with a limited quantity handed out each day. In addition, BNP Paribas and Bank of the West are proud to celebrate every ace served at the tournament and will plant one tree per ace in Southern California areas affected by recent wildfires.

This year’s Bank of the West interactive photo experience, Champions of Change, allows fans to engage with tennis legends through the magic of augmented reality and also help plant thousands of trees in communities affected by recent wildfires.  The video experience provides the opportunity to uniquely interact with one of five tennis greats, such as John McEnroe, Billie Jean King and Martina Navratilova, before receiving a final photo to share on social media.  For every tagged social media share, Bank of the West and BNP Paribas will plant a new tree in Southern California.

As part of their efforts to build a more sustainable future, title sponsor BNP Paribas will be recycling used tennis balls from March 14-18. From 10 a.m. – 12 p.m. and 5 p.m. – 7p.m. each day, fans are encouraged to bring used tennis balls to the North and South Gates to be entered to win prizes.

Evening Entertainment kicks off with the ever-popular Bryan Bros. Band on Thursday, March 12 from 5:00 pm – 7:00 pm. Thanks to our partner Motorola, the greatest doubles team in the history of the game and two-time BNP Paribas Open Doubles Champions Bob and Mike Bryan and their band will take to the Village Stage for a rocking performance featuring drummer and vocalist Jim Bogios from Counting Crows. Before the performance, the Bryan Bros. Foundation will recognize high school doubles teams from throughout Southern California with an awards presentation. This night session is also Champions Night, where a percentage of all purchased evening session single tickets is donated to The Champions Volunteer Foundation. Other evening entertainers throughout the fortnight include Mic Dangerously and the Cartoon Cowboys (Saturday, March 14); Incendio (Sunday, March 15); Michael Keeth Band (Monday, March 16); Faults of Andreas with special guest Mindi Abair (Tuesday, March 17); John Stanley King Band (Wednesday, March 18); Kal David, Lauri Bono and The Real Deal(Thursday, March 19); and Grady James Band (Friday, March 20).

The ever-popular Tennis Talk is back and better than ever in 2020, as Tennis Channel’s Steve Weissman returns to host this daily live talk show that will feature a star-studded lineup of current ATP and WTA Tour players, legends of the game and other celebrities. Tennis Talk takes place at the Village Stage each day beginning Wednesday, March 11.

Tennis Warehouse will once again host daily autograph sessions with star players in front of their store. The retail giant will also have a new standalone footwear space in the Retail Courtyard featuring a variety of on-court performance shoes.

More exciting events and activities throughout the BNP Paribas Open are continually being added, so for the most up-to-date information, check out the complete calendar of events.

At Coronado Bliss, we are committed to your safety and wellness throughout your entire experience with us! Here are some of the extra precautions...
Read more
Business

What does a new restaurant on the verge of opening do when a pandemic strikes? That has been the question facing Liberty Call Distilling...
Read more
Community News

We all want clear skin. Yet, hormones, daily exposure to pollution, and the constant bombardment of other pore-clogging dirt, dead skin cells, and toxic...
Read more
Dining

Not only is May 5th Cinco de Mayo, but since it falls on a Tuesday, it's also Taco Tuesday at Costa Azul! They are...
Read more
Dining

You deserve something sweet and Gelato Paradiso is featuring Horchata as their flavor of the month.  In addition, they are offering a BOGO for...
Read more
Advertisement
Advertise Here (Get Rates)