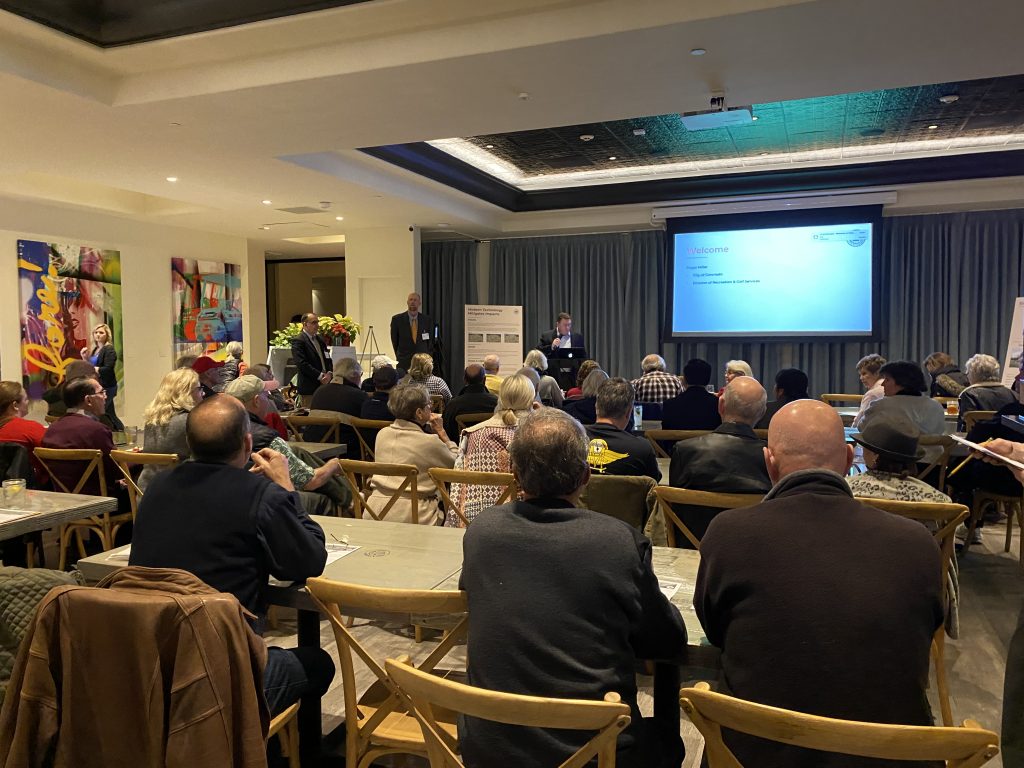 A full house of about 100 people gathered at Feast and Fareway this week to hear details and ask questions about the Golf Course Modernization Project, which includes three key components: a Satellite Water Recycling Facility (SWRF), a new Turf Maintenance Facility, and an updated irrigation system and updated holes. A variety of key city staffers, consultants, and Councilmembers Heinze and Donovan, along with former Councilmember Carrie Downey and Port Commission Garry Bonelli also attended.

Roger Miller, Director of Recreation and Golf Services, introduced the project and turned the mic over to Cliff Maurer, Director, Public Services and Engineering. Mauer gave a brief history of the project, which started when the golf course was built in 1957, upon entering into the first five year agreement with the then California Water and Telephone Company, now California American Water (CAW). He also discussed the water recycling history of the Navy who identified three potential sites for a water plant but deemed the sewer infrastructure non-viable due to high effluent and cost to convert salinity in the water.

Why now? was an important question that Maurer addressed. The multitude of reasons include: the more frequent and severe drought cycles the region is experiencing, new legislative mandates calling for expansion of recycled water systems, CAW projects a 20 percent cost for potable water over the next three years, the repair and replacement of the existing aging infrastructure is overdue, no access to public recycled water supplies, and potential future competition for wastewater for direct and indirect reuse.

The current proposal began back in January 2017, when the City Council approved a feasibility study and Brezack and Associates was hired for this design-build project. Project Manager Jim Brezack has 30 years as a planner in California and several other states and works with a team of experts in this field. The study identified three potential sites:

The size of the project includes three acres of ponds, which cannot be positioned underground due to high water and salt levels. The size of the new turf facility would be approximately 6,000 square feet to accommodate modern operations, compared with the current 4500 square foot facility. There is potential to redesign three or four holes, including creating a premier waterfront hole. Coronado’s golf course is desirable with more than 100,000 rounds played each year.

Brezack emphasized what this facility would do for Coronado:

A new Turf Maintenance facility would increase worker safety, meet modern standards, and reduce environmental storage handling and disposal risks. It would move the maintenance noise away from the residential area, eliminate employee street parking and position crews nearest starting holes one through four to get ahead of play. Alleviating safety concerns of errant golf balls and shallow groundwater are also added benefits. 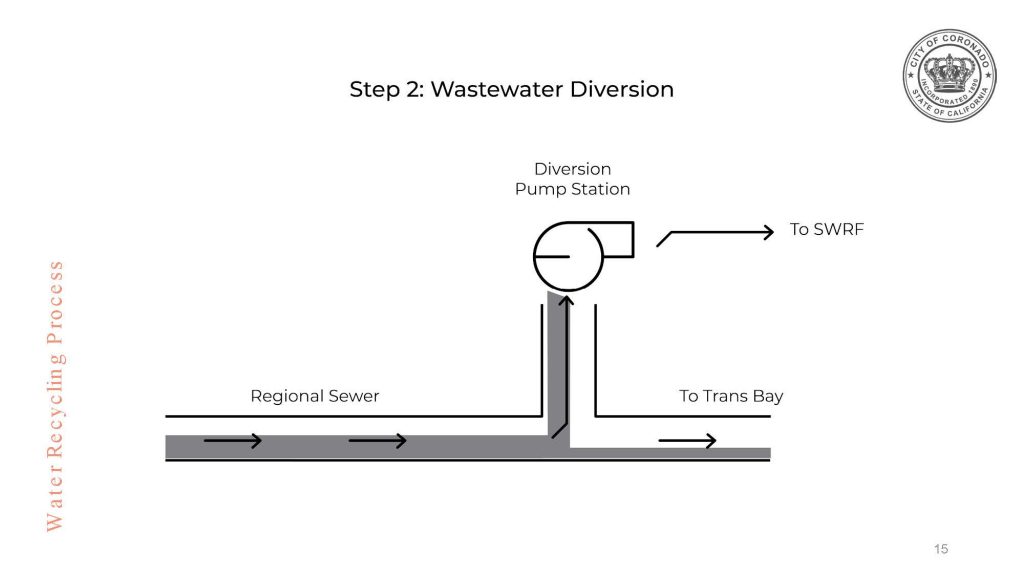 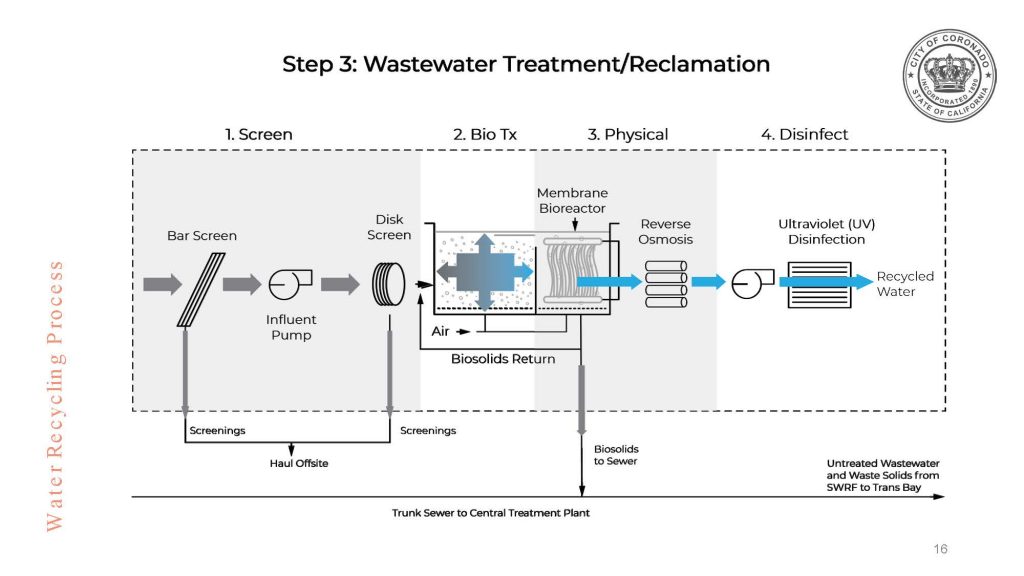 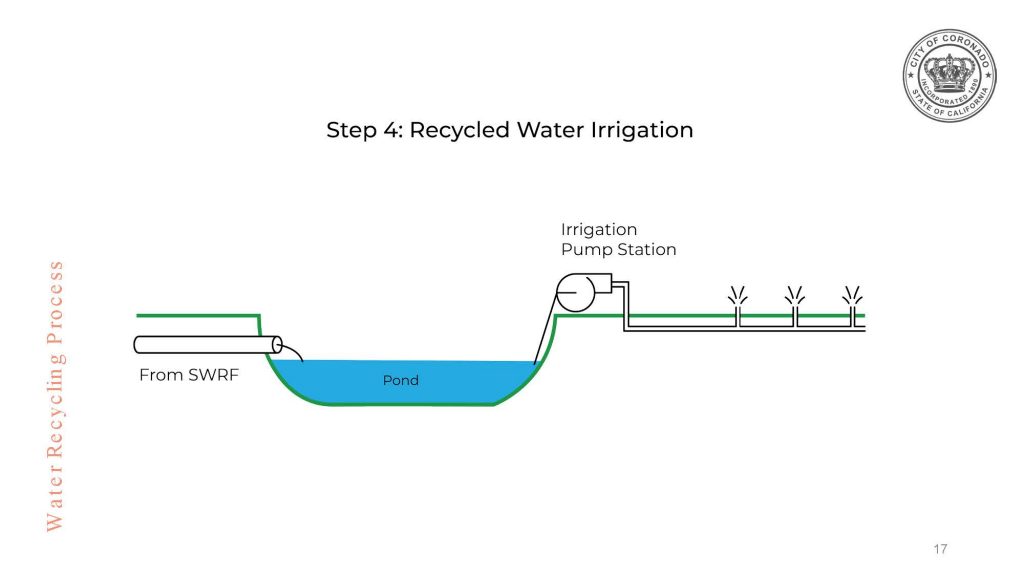 What a Satellite Water Recycling Facility (SWRF) entails:
(see charts above for water recycling process, with step one starting at home)

Dozens of examples of similar facilities were given, both private and in municipalities like Pacific Grove and the City of Anaheim.

Community members in attendance asked questions ranging in scope from how technology has improved and how will it continue to develop in the future to odor and noise mitigation concerns. A desalination plant option was queried with Maurer citing the Santa Barbara project that cost millions of dollars and was never used due to the high costs, brine production environmental issues, and intensive energy needs.

In response to concerns regarding aesthetic, odor and noise and vibrations concerns, both Maurer and Breznack assured residents that modern technology mitigates the impacts of these concerns. This new facility would conform with Title 22 requirements to ensure safe and effective non-potable water reuse applications. Addressing a concern over the earthquake impact, Maurer pointed out that the Coronado Bridge was designed to withstand an 8.0 earthquake, and he also noted that Coronado’s current largest sewage system is three stories located right in the middle of the Ferry Landing with heavy pedestrian traffic.

When asked about the Navy’s and the Port’s fiscal contributions, Maurer said that the new Navy SEAL base will tie into the current Cays system and the Port will pay their share. Port Commissioner Garry Bonelli also confirmed that the golf course’s current lease which expires in 2039 will be renewed.

The cost of the project is estimated at $24 million.  Financing could take various forms including 30-year bonds, grants, state and federal funding, and nominally increased greens fees. Maurer pointed out that once state mandates are implemented, the cost will most likely go up exponentially and this project will result in cost savings for the city in the future.

Next steps include the completion of a Mitigated Negative Declaration (MND), which is prepared for a project when the initial study has identified potentially significant effects on the environment, but the effects now pose no significant effect on the environment because the project was revised. When this is complete later this year, the results will be presented to City Council and then the public has 30 days in which to submit comments. After that, regulatory permitting should occur in spring 2021 with completion of the project planned for 2022.

Attendee Marsi Steirer, Friends of the Library President and a 25-year resident, who lives near the golf course and supports the project, summed it up by saying, “Recycled water is a dependable, year-round source that is locally controlled. The proposed Coronado Golf Course Modernization Project will also upgrade the existing irrigation system, so that it will operate more efficiently, and provide a new Turf Care Maintenance Facility replacing a building more than six decades old. Recycled water is safe and has been used in California for more than 100 years: first in agriculture and farm irrigation and then landscape irrigation. The most common use of recycled water is for landscape irrigation of golf courses, parks, playing fields and medians. In proposing this project, the City of Coronado is taking an important step towards water reliability and ensuring that our golf course, parks and medians stay green.” Steirer was the project director of recycled water studies for the City of San Diego for more than a decade including during the Water Purification Demonstration Project which is now the Pure Water Program, and she encourages residents to take a free tour to learn more and see how the city plans to use the technology to produce one-third of San Diego’s water supply locally by 2035. For more information on that, visit https://www.sandiego.gov/event/public-tour-pure-water-demonstration-facility.