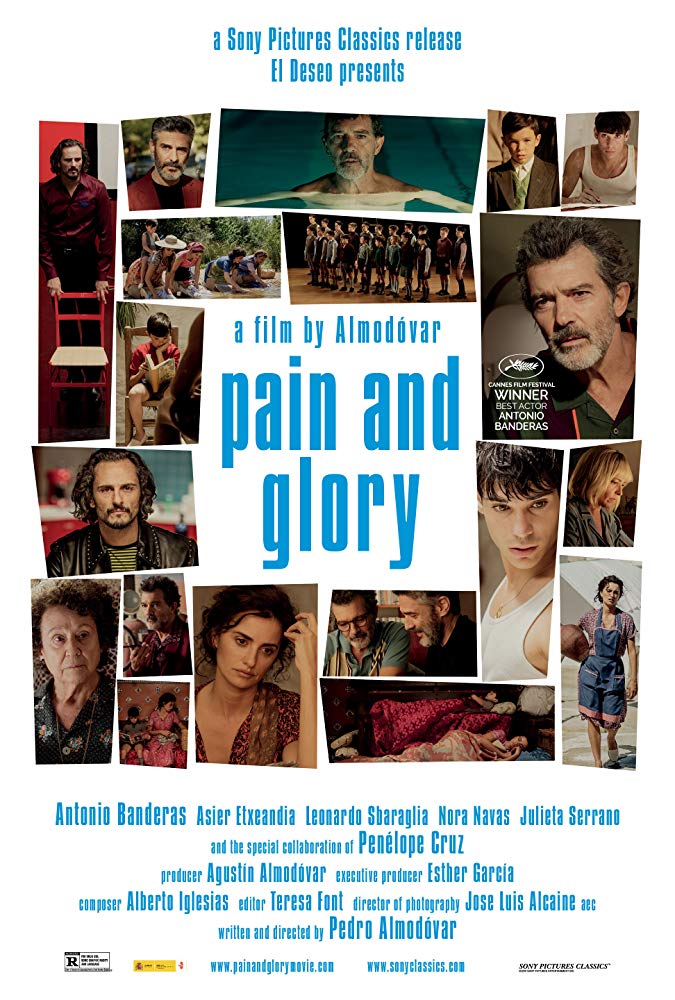 “Pain and Glory” covers a range of issues authentically and honestly. Be prepared for full frontal male nudity, many scenes of heroin use, and subtitles. The story follows Salvador Mallo (Antonio Banderas) alternating between present day and childhood. After directing a very successful movie that ended up costing him his friendship with the lead actor Alberto Crespo (Asier Etxeandia), Salvador’s career fades. His film becomes a classic and twenty years later Salvador tracks down Alberto to attend the re-screening of the film and participate in a Q&A. Reflecting on their major project, Salvador wonders if he handled things the right way with Alberto. Salvador’s friend and confident Mercedes (Nora Navas) shares, “the film hasn’t changed, your eyes have.”

Walking through parts of Salvador’s memory, the idea is what has changed in reality and in perspective. Banderas and Etxeandia present such raw characters. While Salvador is getting older with a myriad of medical issues and this newfound desire to dissect the past, Alberto seems the opposite- like he never left the past. Clashing with the Spanish style of dress and environment, Alberto wears a faded Guns N Roses shirt, jeans with holes at the knees, and is decorated in rings and necklaces.

While the plot focus seems to be this reforming of an old friendship, it is also about balancing other aspects of Salvador’s life. For instance, his childhood (being overly talented and poor), his natural exploration of men, his complicated relationship with his mother, addiction, and looking at the same situation decades later when you are not the same person that you were. Allowing the space to grow, mature, and reflect. The music choices were very different in the Spanish film than in American films, the songs were more pronounced, adding the dramatic feel, and less boppy than we typically see. The film itself pushes the edge of what audience members may be comfortable with, but it does it in a tasteful way. Not looking for the shock factor, and not romanticizing or heightening the moment, just showing it as it is.

Rating: Rated R for drug use, some graphic nudity and language.

Fun Fact: Julieta Serrano and Antonio Banderas already played mother and son, more than 30 years before, in another two movies by Pedro Almodóvar: Women on the Verge of a Nervous Breakdown (1988) and Matador (1986)

Arguably one of the most popular New Year's resolutions is getting back into the gym. But what does that look like this year? A...
Read more
Business

Gift of San Diego is a local business that rolled out in April of this year. Even with the looming pandemic, Marla Farrage and...
Read more
Advertisement
Sponsored Partner Links