There was much to celebrate with four ceremonial proclamations starting off this week’s City Council meeting. Good news that the city’s Fire Insurance Rating improved. A letter is being sent to the California Department of Housing regarding the formula for determining the extreme Regional Housing Needs Assessment numbers for Coronado. Residents and non-residents will see changes in the pool fees, the Free Summer Shuttle had its best year yet, and a warm goodbye to City Clerk Mary Clifford. 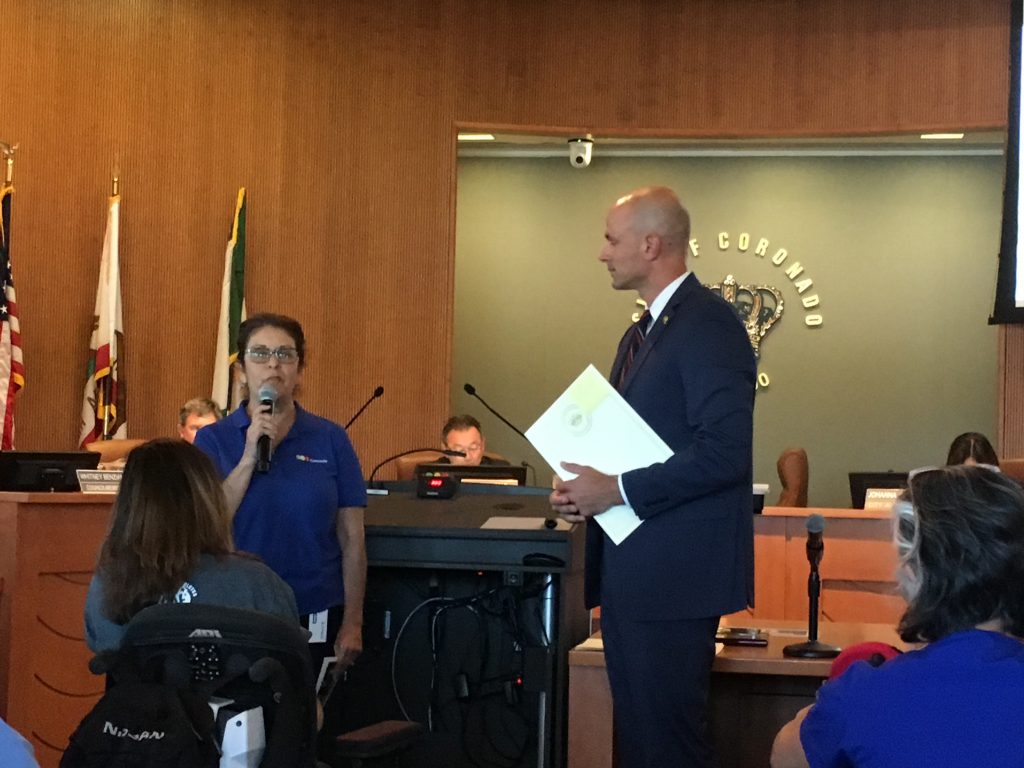 To start off the meeting, Mayor Bailey proclaimed September 30 through October 4 as National Rideshare Week in Coronado as he presented a proclamation to SANDAG Account Executive Patty Talamantes. Rideshare Week 2019 celebrates alternative commute choices and encourages employer and commuter participation. On October 2, riders can try transit for free on Free Ride Day/Clean Air Day with MTS and NCTD. 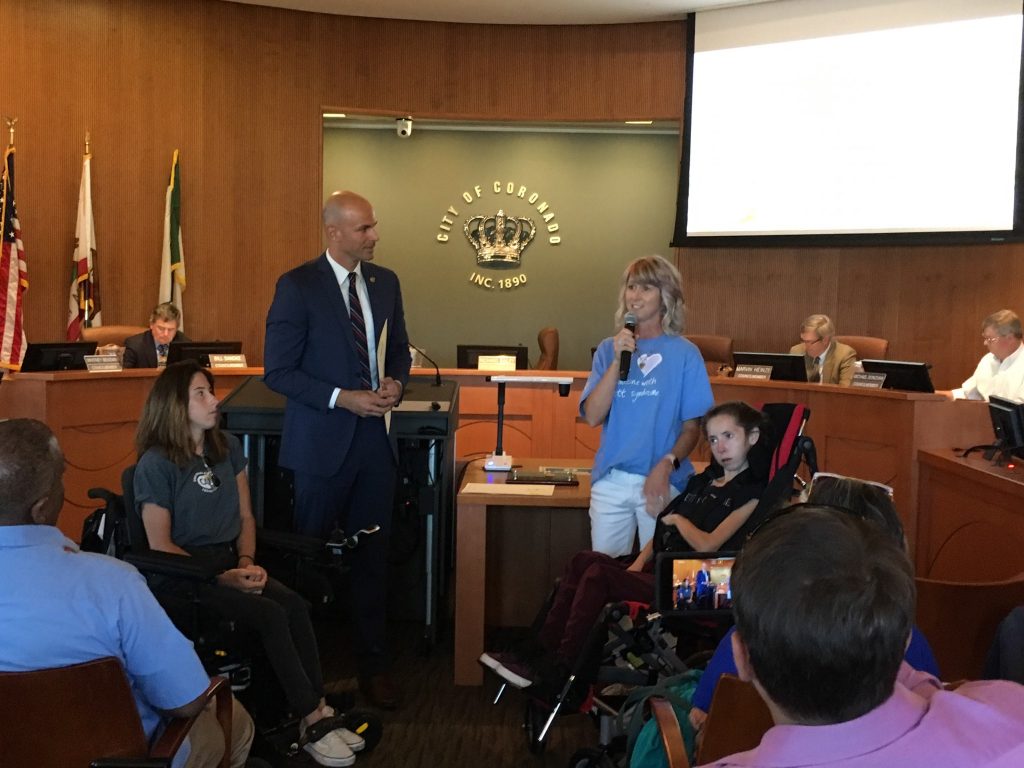 Disabilities Awareness Month will be celebrated during October 2019 and Mayor Bailey presented a proclamation to Veleria Fabiszak and Quinn Waitley, which focused on the abilities of all people with developmental and physical disabilities, wounded warriors and their families, friends and associates. Everyone is urged to take time to get to know someone with a disability.

Coronado Fire Chief Jim Lydon and his fellow firemen were on hand to receive a proclamation from Mayor Bailey proclaiming October 6 through October 12 as Fire Prevention Week. The theme is “Not Every Hero Wears a Cap. Plan and Practice Your Escape.” He emphasized having a home escape route in place and invited the public to attend the annual Public Safety Open House on Sunday, October 6 from 11 am to 3 pm at the Fire Department Headquarters, 1001 Sixth Street and the Police Department Headquarters, 700 Orange Ave. 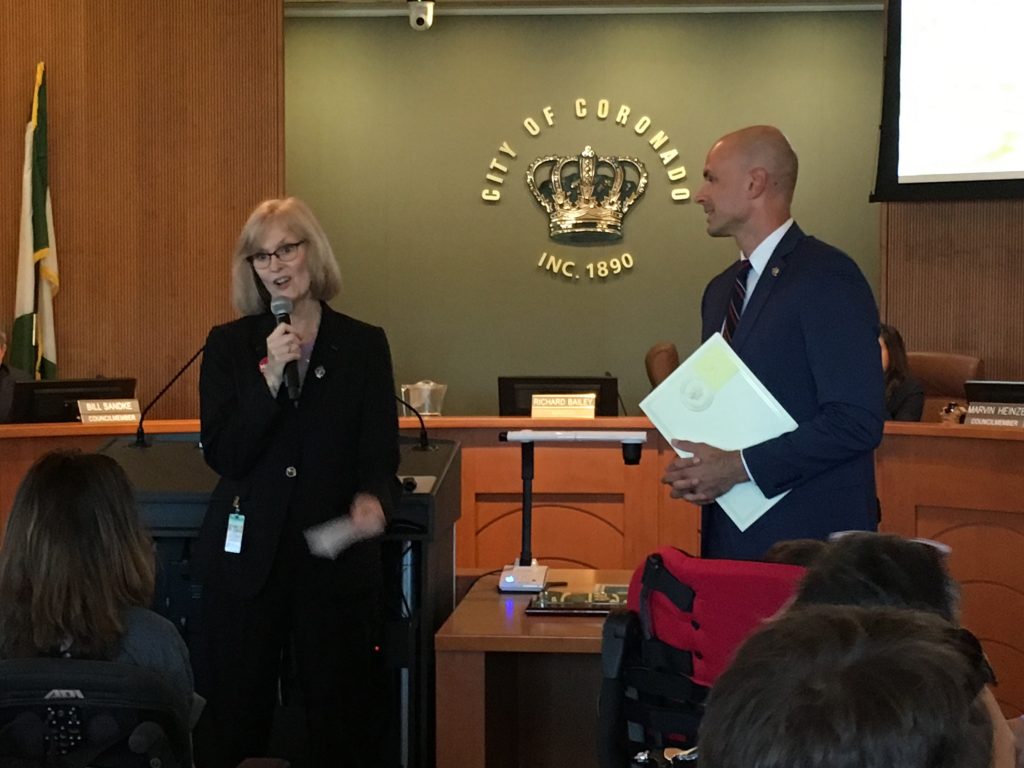 In a heartfelt goodbye, Mayor Bailey presented City Clerk Mary Clifford with a proclamation proclaiming October 1 as Mary L. Clifford Day. Having served as City Clerk since 2013, she was previously the executive assistant to the Coronado City Manager for 11 years. Bailey highlighted how Mary keeps everyone organized, is a stickler for starting council meetings on time and is known as the “keeper of the city fridge and general City Hall maintenance monitor.” She will be greatly missed.

Rich Grunow, Director of Community Development, presented the highlights of a letter that the city drafted (see images below) to send to the California Department of Housing regarding the proposed 2021-2029 Regional Housing Needs Assessment (RHNA) Plan.  Highlights of the letter include the formula for the assignment of Navy jobs, California Coastal Zone restrictions, and the unique geographical limitations of only 2.2 square miles. The mayor and all the councilmembers praised the letter and voted unanimously to approve sending it with recommendations from the meeting. The mayor then made a new motion suggesting forming a council subcommittee to address this issue and after Councilmembers Sandke, Benzian, and Donovan volunteered, the mayor selected he and Councilmember Donovan to comprise the subcommittee. This was approved 3-2, with Councilmembers Sandke and Heinze voting against the motion.

Rachel Szakmary, Active Transportation Planner gave a report on the free Summer Shuttle, highlighting that this year had the highest ridership since its inception in 2013. With an increase of 24 percent and 154,026 boardings, the shuttle ran on an every 15-minute schedule from Memorial Day through Labor Day. It is no surprise that the highest ridership was on July 4 with 3,593 riders. The program cost the city $145,930 which amounts to $.95 per boarding. Interior bus advertising sales revenue was $5,750 and Discover Coronado paid $25,000 to wrap the bus. She also said that the city provided a free 4th of July shuttle for the Coronado Cays which had a ridership of 557 which was up 4.5 percent from last year. The cost was $1,939 making the average cost per ride $3.48. She said that the 1,244 Cays free MTS day passes were passed out by the Cays Homeowner’s Association to 187 households, which cost the City $7,464, for an average boarding cost of $3.

She highlighted that the majority of riders throughout the summer were visitors, but many residents also used the service and toted everything from wetsuits to fishing poles across town for a true Coronado experience. Sue Gillingham, Executive Director, Chamber of Commerce asked what it would take to run the free shuttle all year and asked about the holiday program which will not be funded by Discover Coronado this year.

City Manager Blair King gave a report on the city’s Insurance Service Office (ISO) Public Protection Classification, also known as the Fire Insurance Rating, positively stating that the ISO gave Coronado a new rate effective December 1, 2019 which was improved from a four to a three. He pointed out that the city is close to a ranking of two. The ranking system is from 10 to 1 and rewards better rates to lower rankings. To give a nationwide perspective: 19,537 communities were rated at class six or higher; 9,214 were rated class five; 6,991 were class four; 3,490 were rated class three; 1,597 were class two; and 348 were rated as class one. Coronado scored 78.78, out of 80.00 for a class two rating. Fifty percent of ISO’s classification is attributed to the Fire Department with factors such as equipment, staffing, training and operations. Water supply accounts for forty percent, including items such as hydrants and hydrant testing, with emergency communication/dispatch making up ten percent of the score. King praised Fire Chief Jim Lydon and his team for making strides in this area and pointed out that the Fire Department is reviewing the ISO report to look for cost effective way to further improve Coronado’s score. He pointed out that lower rankings benefit homeowners and business owners.

The Mayor also asked King to address issues that were raised during Oral Communication. The first was in regard to if the city buildings were solar and he pointed out that almost all of the city’s buildings were LEED silver certified, which means they are environmentally friendly. King also said that the new ordinance banning gas powered leaf blowers will be delayed allowing for additional public comment. It was scheduled to go into effect January 2020. They are also looking at addressing time limits during the day for usage. The city and its contracted vendors have already converted to all-battery weed whips and blowers with great success. The last item he addressed was a proposed Bike Rodeo for military kids and he pointed out that the city had done these in the past and it would be a good project for the Mobility Commission.

Roger Miller, Director of Recreation and Golf Services, gave an extensive presentation on the proposed new fee schedule for the Aquatic Center Pool at the Coronado Community Center. For background, the last pool fee revision was in June 2011. In April 2019, Hunsaker and Associates presented a detailed report to the vity regarding the pool’s fiscal impact and how that could be maximized. The recommendations include restructuring monthly and annual pass fees. Monthly annual pass fees will now include use of the Fitness Center and will be reduced to encourage participation (see chart above). It was determined that the current fee is $2 less than other San Diego Aquatic Centers so this will be increased. A new Summer Family Pass will be implemented for use during Memorial Day weekend through Labor Day.  Also, a new lane rental and shower fee schedule were part of the proposal.

Miller pointed out that this five-year implementation plan, incorporating these changes, will result in an increase of $123,000 in revenues and decrease expenses by $50,000. The effective date will be January 1, 2020. The city will also be pursuing pool use agreements with Coronado Swim Association and Legacy Swim Association, which has received letters of complaint from several residents and comments during Oral Communication. The mayor encouraged residents to make the councilmembers aware of their concerns. Councilmember Donovan asked staff to develop an easy to read format usage data chart for the next council meeting and to also notify current pool users of the changes so they can give input. The council unanimously approved this motion.

Dave Rolland from Senator Toni Atkins office gave a report on the legislative session that ended September 13. He highlighted funding for homelessness, education and issues like police use of force and controlling exorbitant rent fees. He mentioned that $5 million has been set aside for the Suicide Prevention Barrier for the Coronado Bridge. He also mentioned that Arts Grants are available from $3,000 to $50,000 and suggested that the city apply. He introduced Toni Duran as our new liaison, as Rolland will be taking on other responsibilities.