Mr. Benjamin’s Cotillion, Because Being a Good Person Never Goes Out of Style 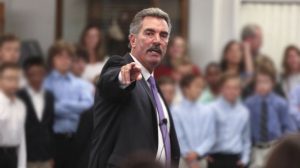 Outside CMS on many Thursday nights throughout most of the school year, you may notice a (large!) crowd of dressed up sixth graders and their curious parents. Girls are in dresses, boys with ties and belts and dress shoes. This exciting right of passage taking place for many Coronado middle schoolers is cotillion. Donald Benjamin founded Mr. Benjamin’s Cotillion in 1954 to teach the finer points of social amenities and ballroom dancing in all areas of San Diego, including Coronado. In 1983, Donald’s son Peter Benjamin began teaching some of his own classes. When asked if he took over for his father, Mr. Benjamin laughs, “there wasn’t a date where there was a changing of the guards!” An analogy only someone focused on etiquette could pull out on the fly.

In this day and age, people arguably run on technology. Attached like a limb, a phone is never too far away. Which begs the question- is a 65 year old etiquette class for sixth graders even relevant anymore? Many businesses adapt and evolve with the times and the needs of customers. Mr. Benjamin’s has remained a rock in the storm of trends.

You won’t find Mr. Benjamin in the news by choice. He shared that our interview was the first interview he has participated in with someone who has not had a child in his class. You are not able to DM him, don’t bother Yelping him, and while I have learned that you can “check in” to his class on Facebook, I doubt he is aware.

So, in an ever changing world, why not adapt? Mr. Benjamin shares, “this may sound oversimplified, but kids haven’t changed that much. Sixth grade is the perfect age. Young enough to be open minded, enthusiastic, and have fun.” Also, the fundamentals of the class have not changed, frankly, because they shouldn’t. “I love the message, the positivity. I show them through dialogue, through making eye contact. It is about being kind, nice, and thoughtful. I know these are cliched words but it is how we raise kids. It’s not as absent as the news makes it seem. There are tens of thousands of good people. Most of your day is good. Once in a while you get a jerk on the freeway, but mostly your day is good.” He also breaks down a misconception about cotillion, “it’s not about white gloves and teacups. It’s not virtual life, it is about communication. How to listen and respond. The skills they need when they become young adults and beyond.” 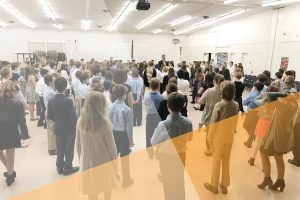 What Mr. Benjamin enjoys the most about the class is participation and positivity. Participation comes in all forms. When in class, he encourages his students to participate. However, where 15-20 parents used to sit in a few decades ago, he now estimates there are over a hundred parents that stay. Mr. Benjamin shares that this is, “a fantastic opportunity. It’s great for the kids to review what they learn with their parents.”

Over 150 sixth graders can be found in one of Mr. Benjamin’s classes, most with a waiting list. Not only is there no online presence aside from an out of date website, but there are no applications available online. To be invited to Mr. Benjamin’s class, you request an invitation here. So, how does one fill a class of 150 without bombarding parents with BOGOs and a barrage of e-mails? The mom network. Mr. Benjamin compares this to the concept of a watering hole centuries ago, where people would connect and share information with one another. He does acknowledge it may happen in other forms now with texting and e-mails but the message remains the same. “It’s a parent saying ‘my kid went two or three years ago, you should do it!’ or ‘my child is doing it next year, is yours?'” Mr. Benjamin also shares one of the special aspects to being part of something for so long, “I had a young father at my Coronado class. He told me, ‘my dad was in the class that your dad taught, and then I was.’ He was dropping off his own son. It is a three generation tradition.”

While the program has been around six and a half decades, Mr. Benjamin isn’t sure what will happen in the next six and half. He says that even if it isn’t Mr. Benjamin’s, he hopes this type of program will continue. However, he does share that he has no immediate plans to retire. The program continues to survive and thrive. He shares the insight that, “Mr. Benjamin’s is old school but applicable to common day.”

After years of planning, Erin Ayres opened her studio, Yoga on C, in the beginning of July. About a week later, Governor Gavin Newsom...
Read more
Education

As the summer winds down, CUSD is actively preparing for a unique and engaging 'Back to School' for both staff and students. In these...
Read more
People

The latest Community Hero video from the Coronado Library’s Dive into Discovery Summer Reading Series. Thanks to Surf’s Up Studios for the video.https://youtu.be/ePfWJySojuk
Read more
Business