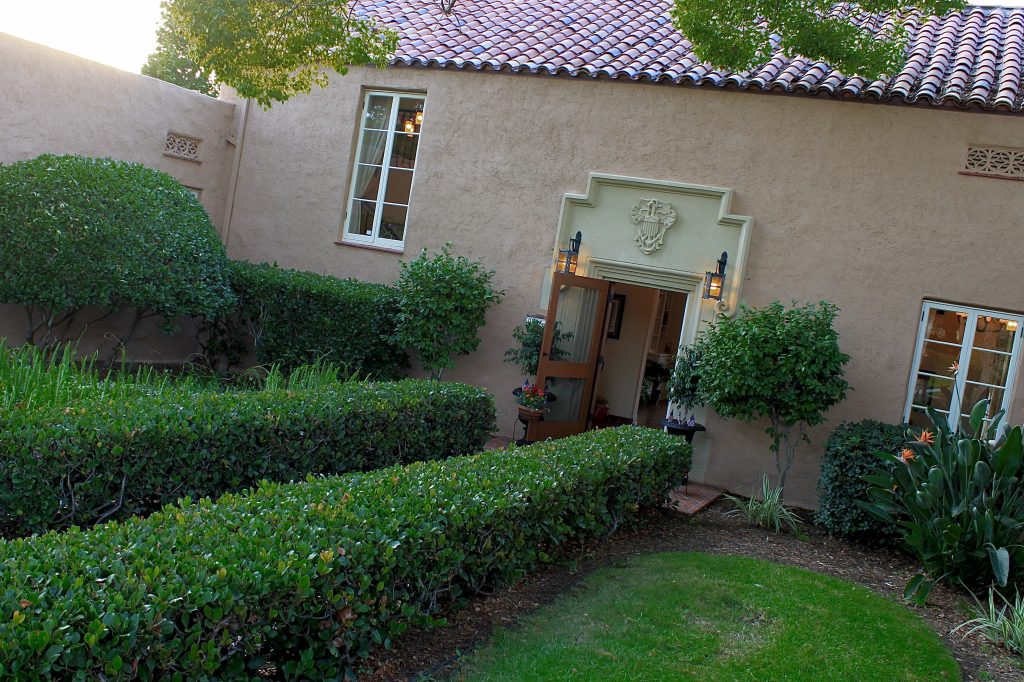 Miller and his wife, Ellen, graciously opened their home on Thursday evening, September 26th, hosting over one hundred guests on their sprawling lawn. Attendees were encouraged to explore the lower level of the 1919 historic home designed by renowned architect, Bertram Grosvenor Goodhue in conjunction with the Navy Bureau of Yards and Docks.

Goodhue rose to prominence as lead designer and site planner for the 1915 California-Panama Exposition in Balboa Park. His Spanish Colonial Revival style inspired an architectural movement across California.

The site plan for the NAS San Diego Historic District was influenced by the early 20th century Beaux-Arts tradition—axiality, symmetry, and unity of composition. But the married officer’s housing departs from this scheme by situating it in a curving cul-de-sac. Cmdr. Leonard M. Cox, civil engineer, was instrumental in overseeing the construction and vision of Goodhue’s plans.

Quarters A, also known as the Commandant’s House, is reflective of Goodhue’s Spanish Colonial Revival style, also known as Mission Revival. What makes this historic home and surrounding buildings exceptional is the functional and simplistic form illustrating Goodhue’s foray into Spanish Military style.

Miller notes how the layout of the home “seemed to be designed with naval aviators in mind.”

Known for their hard and fast lifestyle in the heyday, officers often held raucous dinner parties. The spacious lower level rooms and flow towards the back patio make for easy entertaining. Ellen said her favorite spot is the “secret garden” an area located in a cozy enclave with a swing.

Throughout Quarters A, the Millers have placed their personal touch on the décor. Ellen repainted the interior in a yellowish hue, brightening up the home. And Miller’s distinguished aviation career can be tracked along the foyer walls where sketches of an F/A-18 and A-7 hang.

When they leave the residence, Miller said he plans to leave a reproduction of “barnstormer” Eugene Ely wearing bicycle tire tubes fashioned by his wife. Ely was preparing to be the first pilot to takeoff from a ship, and she feared for her husband’s safety because he couldn’t swim.

Photographs spanning over a hundred years of naval aviation history on North Island functioned as centerpieces for tables. Guests wandered from picture to picture with the US Navy’s “Destroyers” band providing musical accompaniment.

While Coronado was originally known as “Tent City,” the Navy’s tent encampment on North Island was dubbed “Camp Trouble,” according to Pescador. The name arose due to the numerous training aircraft crashes. Later, conflicts with the Army occurred who were also stationed on the Spanish Bight in the 1910s.

[Note: It was later discovered after the centennial event that Captain Tombs was asked to leave Quarters A due to Vice Admiral Welles having seniority when he arrived. Tombs was never officially recognized as the “first resident” according to the plaque in Quarters A.]