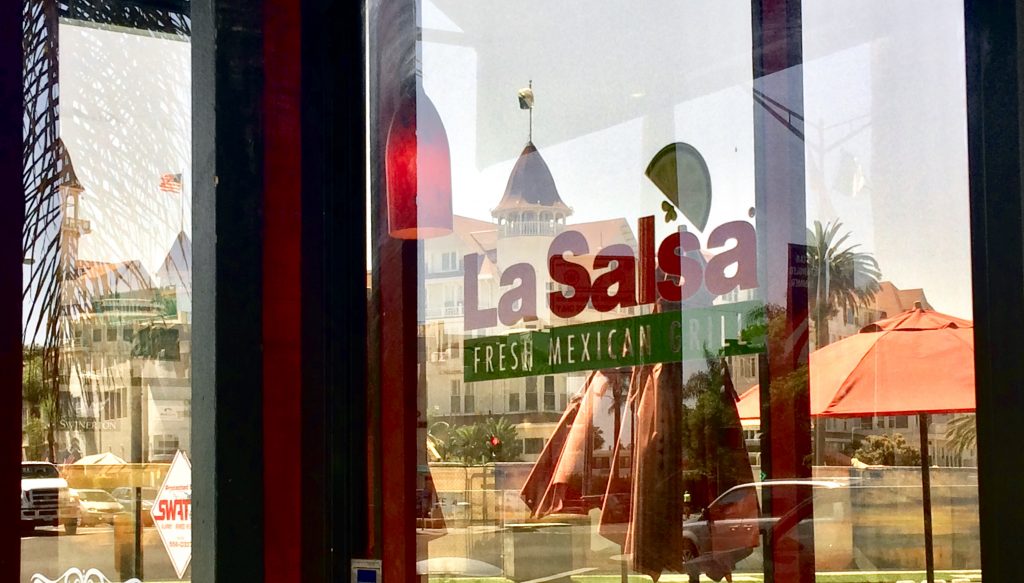 The bright red La Salsa sign has been removed from the storefront, but customers still frequent the fast-casual Mexican food chain for lunch and dinner. The economically priced food options and name recognition made the chain a popular spot for patrons.

Social media claims La Salsa will be closing their Coronado location on September 15th, but after speaking with restaurant workers the date may come sooner than expected.

Less than two weeks ago, La Salsa employees received notification that their site would be closing in September and the former manager has already taken permanent leave.

As the only La Salsa location in the greater San Diego area and confirmed by an employee, workers will need to find new places of employment after its doors close permanently in September.

The reason for its closing remains unclear to employees, but the La Salsa national brand has undergone numerous changes in ownership over the past few years. Originally founded in Los Angeles in 1979, the company is now owned by Scottsdale-based Kahala Brand, a subsidiary of the Canadian MTY Food Group. The Coronado location has been in operation since 1989.

According to news reports, La Salsa restaurants in Arizona ceased operation in December 2018, signaling trouble for the Mexican food chain.

Situated in one of Coronado’s prime business locations, the restaurant property with an outdoor dining option acquires much of its business from military service members, beachgoers, and guests staying at the historic Hotel del Coronado.

CRBE, a commercial real estate services and investment firm, placed the 1474 square foot “former restaurant space with patio seating” up for lease on its website. The company highlights the location as “the gateway to the Orange Ave Retail District” with over 2 million visitors annually.

Joel Wilson, a representative for CBRE, said he doesn’t have any information regarding the reason for La Salsa’s closure. He received a call a few weeks ago to advertise the property space for lease. Wilson said “there’s been a lot of interest in the property,” but can’t say for certain what type of business will occupy the space.

He does believe that since the location is already restaurant-ready, there is a good chance it will be home to a new eatery.

Coronado lifeguards posted warning signs to let the beach-going public know that a mature White shark was observed just off the shore in the...
Read more
Business

OTB Shopping at San Diego Westfield Centers to Resume May 29

Westfield shopping centers in San Diego, which include Westfield UTC, Mission Valley, North County, and Plaza Bonita, announced that they will re-open for the...
Read more
Education

“Today is going to rock!” is the perfect uplifting mantra for these quarantined times. It also aptly describes the life of Joe Kane, nicknamed...
Read more
Crime

May 27, 2020 Updated to reflect the second arrest.UPDATED May 27, 2020 - The Coronado Police Department announced this afternoon that Coronado Detectives have...
Read more