DCM: The Heart Disease Scare, Is It For Real or Not?

It was my passion for pets that led me to buy Coronado’s pet store, Wag’n Tails, in 2005. From the very beginning, it was much more than a business. I wanted my store to be a destination for pet owners, with a welcoming environment and the healthiest pet food and treat options available. We also began building warm relationships with our customers through product education and being actively involved in the community on many levels.

While there have been plenty of challenges along the way, including competing with the “big box” retailers, dealing with product recalls, and staying up-to-date on pet nutrition and health, nothing prepared me for what happened one day in early spring this year when a longtime customer walked up to the counter and said, “My veterinarian just told me the food I’ve been buying here for my dog can cause heart disease and death… something called DCM.” She was shocked, frightened and confused. I was devastated. Had I been selling what I believed was a great product that actually was a threat to lives of the pets and a terrible disservice to their owners whom I had come to know and love?

I immediately started researching DCM, which stands for dilated cardiomyopathy, a rare but deadly canine heart disease. As I did, more and more customers came in with the same concerns. Their veterinarians had warned them off the grain-free pet foods we carried, or they had read about DCM online or heard it from friends. No matter what the source, they were terrified. Some were, understandably, even angry and outraged.

By July of this year, the FDA Center for Veterinary Medicine released a report confirming the investigation of a “potential link” between grain free diets and DCM. They named 16 brandnamed products known by some in the pet food industry as “BEG” foods. “BEG” is an acronym for “Boutique, Exotic and Grain free.” The New York Times reported it. Social media went crazy. More panic ensued. But the more I delved into it, the more doubtful I became.

The fact that only 16 brands out of hundreds were named immediately made me suspicious. How was it possible that only these foods, many of which we carried at Wag’N Tails, had a possible link to DCM? With that burning question I endeavored to dig deeper into the FDA report. Here is a bit of what I discovered:

The Truth about pet food article asks, “Why is the FDA providing important information regarding a supposedly unbiased investigation to this trade association well in advance of updating pet owners?” “Did the FDA intentionally give industry details in advance of pet owners to give industry time to spin the soon to be released data?” The article states they have been inundated with email complaints by pet owners about their own veterinarians pushing them to purchase only grain-based pet food produced by Purina, Mars Petcare or Hill’s. Some veterinarians are even going as far as to state these products are the only brands that are safe.

We at Wag’n Tails have heard these statements echoed by so many frightened customers with some choosing to follow this advice because, understandably, it comes from their vets. Many veterinarians are going as far as to say there are thousands of new cases of DCM reported daily. This is untrue and even evidenced by information released by the FDA. 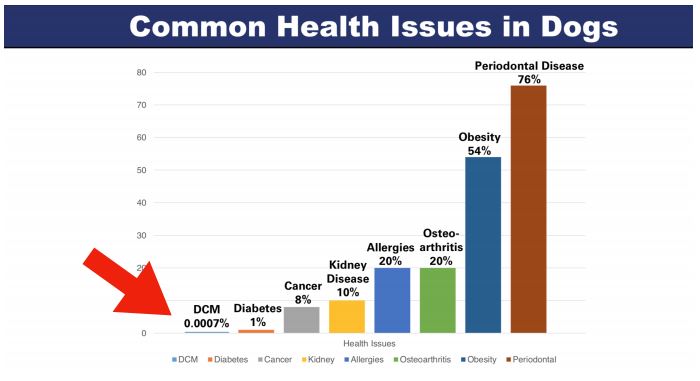 The most important fact detailed in the chart above, is that while DCM is a serious disease, it affects only 0.0007% of dogs. Also, in reviewing the cases of DCM reported to the FDA, I found the majority of brands involved, including Purina One, Hill’s Pet Nutrition, Halo, V-Dog and Lotus, are not boutique brands, but are stocked in big box stores, veterinary clinics and grocery stores. Further, most veterinarians have little to no training in nutrition, but most do have relationships with corporate pet food producers. In fact, as Truth about pet foods.com points out, “Manufacturers, trade associations, veterinarians, pet store chains and even the regulatory system itself are all interwoven into a system where industry prevails and consumers (and their pets) struggle.”

In “Bad Science and Big Business Are Behind the Biggest Pet Food Story in a Decade,” an article by Daniel Schulof in August this year, a retraction of the DCM reports is being demanded. It’s worth a full and thorough read. The first three points that stand out to me are:

Schulof ends his article by noting these facts:

I agree, it’s pretty strange. It’s disconcerting. It’s caused too much anxiety and panic. And it looks a lot like misinformation designed to support the big producers of grain-based dog food who dominate an industry worth more than 70-billion dollars. That same grain-based food, by the way, has its own health risks. The big producers mostly use GMO grains (typically corn and soy) that contain the herbicide glyphosate (brand name: Roundup). Dogs Naturally reports that dogs harbor up to a whopping 5,000% more glyphosate than humans, which is associated with cancer, liver disease and heart disease.

So what does Wag’N Tails recommend?

First, I believe dry dog food might not be the best option for our pets, but if budget and time constraints make it the only option, it should be free of GMO products, contain meat rather than meat byproducts, not have fillers, and be as fresh as possible. This said, I personally recommend whole fresh foods above any other. Here is how I rank what is best for your pets:

As a final note, I still feel the heartache I felt when that valued customer first came to me with their DCM worries. I feared I had let them down. I second-guessed myself and wondered if we were selling something dangerous when our entire mission at Wag’N Tails is to provide the very best nutritional options for your beloved pets. After months of endless research, consultations with medical experts and spending a great deal of time with canine dietary specialists, I can say we fully believe in the products we have chosen to carry. We also fully believe in your right as pet owners to know what’s going on and why. We will stay on this issue and will continue to communicate with you in every way possible.

The bottom line is that all we want to do is nourish our pets as best we can, to love them, play with them, and to keep them happy, healthy and whole.