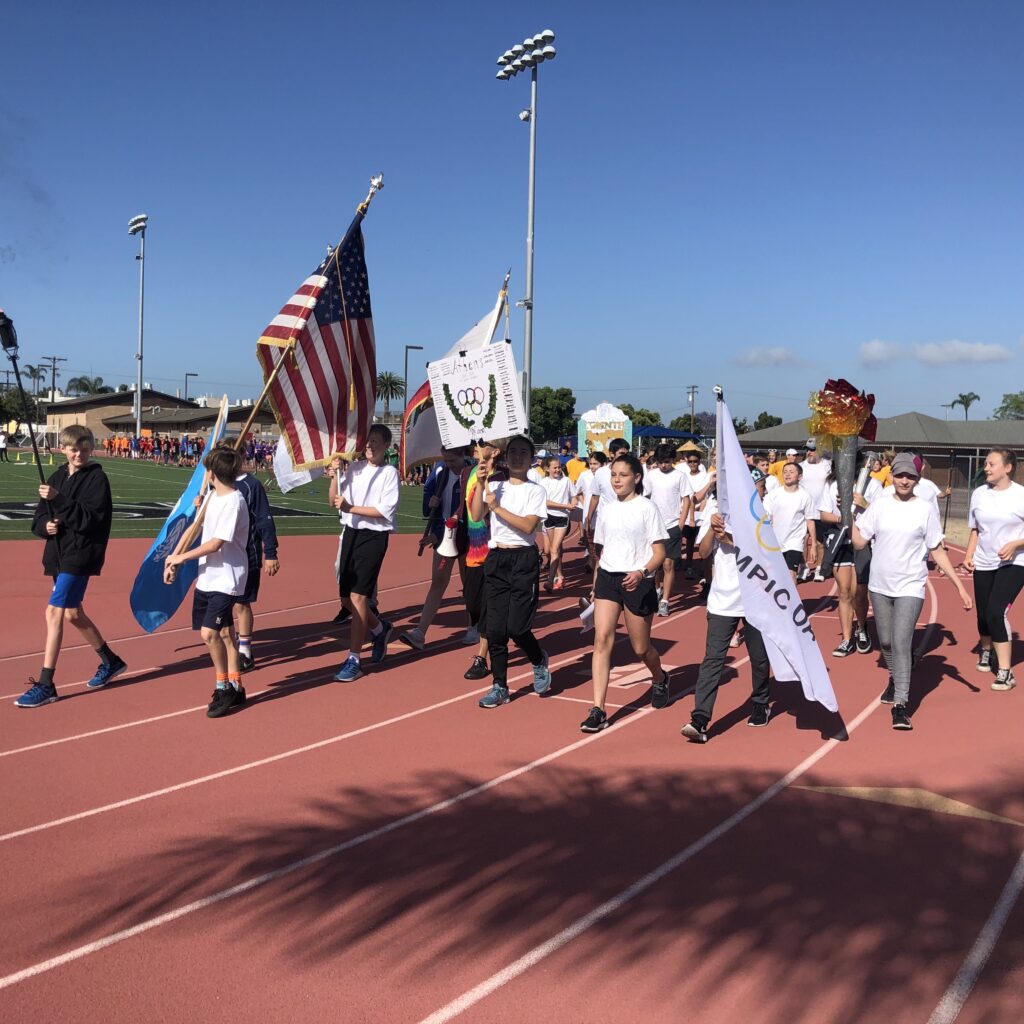 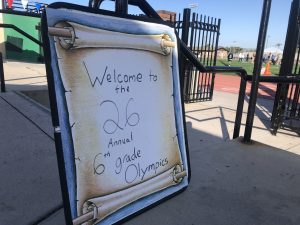 The Olympics came to Coronado Middle School, May 24, as the 6th grade homeroom classes competed for the title of Olympic Champions. A rainbow of colors marched along the track in the opening ceremonies led by Ms. Bonnie McCann’s homeroom class dressed in white, carrying the Olympic flag, the American Flag and Banners.  Every homeroom had a specific color, a character trait and chant they shouted to encourage their teammates as they competed.

During the opening ceremony words of encouragement were provided by Karl Mueller, Coronado Unified School District Superintendent, Principal Karin Mellina, and Counselor Mike Crooker who told students, “Today is not all about being THE BEST, it is about being the best YOU can be.” Each classroom also had students give remarks to encourage demonstrating the character traits CMS represents and to motivate the crowd. The student presentations were entertaining and humorous ranging from rap songs to chants, and achieved their mission of inspiring the students.

“Sixth Grade Olympics is a fun and exciting day for students as they compete in a real life, simulated Summer Olympic Event.” Said Bonnie McCann in a letter to parents, “Sixth Grade Olympics is designed to teach the California Standards for History related to Ancient Greece as well as the California Physical Education Standards which teach students to understand the workings of a large group athletic competition all the while using their Physical Education Content Knowledge of Skill Performance and Goal Setting.” 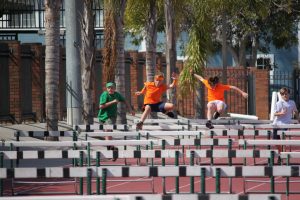 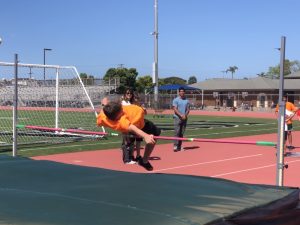 The morning events kicked off with the 80 meter hurdles and the field events including high jump, long jump, shot put, and softball throw. Each student was required to compete in three competitive athletic events during the games with track and field in the morning and a swim meet and water polo tournament in the afternoon. When students weren’t competing they were cheering on their teammates and enjoying the day away from the classrooms.

“Along with traditional Modern Olympic Game Events, there are a few other events like an obstacle course and distance throwing events to ensure all students have a chance to compete in something they are good at and enjoy doing,” said Ms. McCann. “All in all, Sixth Grade Olympics is an enjoyable educational experience for all students at CMS.”

During the closing ceremony, all the classes joined in a circle in the middle of Coronado High School Niedermeyer Football Field for the awards presentation. Along with the traditional Gold, Silver and Bronze medals awarded, there were also ribbons for 4th, 5th and 6th place, and the Gold Medal winner also crowned with an olive wreath as was tradition in the original Olympic games. At the conclusion of the ceremony, the long-awaited announcement of which homeroom class earned enough points to be Olympic Champions was revealed. Ms. Miller’s 6th Grade Math 6H class took home the honor, cheering and running a victory lap in celebration.

Coronado Middle School continued its proud tradition of Take a Vet to School Day as they honored veterans ranging in service from WWII to...
Read more
Dining

Coronado Island Film Festival (CIFF) returns for its fourth year, bringing with it a variety of films, panels, parties and workshops for attendees to...
Read more
Community News

In the wake of recent deaths and lung illness cases caused by vaping, or the use of e-cigarettes, the Center for Disease Control (CDC)...
Read more
Dining

Coronado Cays park was filled with hundreds of residents and friends of the Cays on Saturday Sept. 28, as they celebrated the Cays turning...
Read more
Advertisement
Advertise Here (Get Rates)