Hazardous Materials Teams working with the U.S Environmental Protection Agency (EPA) have been working around the clock to secure and remove nearly 25 pounds of spilled mercury after a garage containing over 100 mercury-filled thermometers caught fire in Coronado earlier this week.

The cause of the fire is still under investigation. The extensive cleanup, which shut down 5th Street between Orange Avenue and D Avenue until further notice has left many residents wondering who is paying for the HAZMAT removal and use of city personnel.

“Generally speaking, release generators and landowners where releases occurred are responsible,” Margot Prez-Sullivan, with the U.S. Environmental Protection Agency, said. “The EPA’s Criminal Investigation Division is aware of the release.”

Environmental crews reported the spill included about 24 pounds of mercury and responders set up a safety perimeter around the scene. One fluid ounce of mercury weighs almost one pound. It is still unknown why that amount of mercury was in the garage.

“We can’t speculate as to an individual’s motives for having mercury or devices containing mercury in his or her home,” Perez-Sullivan said.

The EPA website is a great resource for those interested in learning more about mercury exposure and how to clean up a mercury spill, in the event that a thermometer breaks.

However, given the magnitude of Monday’s spill, “the City of Coronado formally requested the U.S. Environmental Protection Agency assume responsibility for the cleanup,” Janine Zuniga, Senior Management Analyst for the City of Coronado, stated in a press release.

EPA and City of Coronado Reassure Residents of Their Safety

And while no evacuations or injuries have been reported, residents are left wondering if they should be fearful of exposure, especially after runoff from the water used to extinguish the garage fire puddled several blocks away. Perez-Sullivan and Zuniga agree, residents shouldn’t be worried about mercury emissions in the air or water. 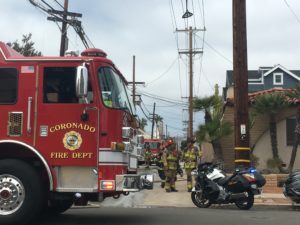 “Environmental Health staff monitored the gutters from there back to the scene with no indication of contamination,” said Zuniga. “The water was pumped into barrels for disposal after further testing. There was no indication that any of the water entered the storm drain. Health officials evaluated the gutter and driveway directly fronting the scene on Wednesday, June 6, and determined those areas to be clear of contamination.” 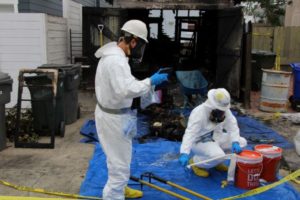 A large trash bin was brought in and the ground underneath it was covered with plastic on Tuesday. Crews in white coveralls and safety masks have continued to remove debris from the garage, which included dozens of shattered glass vials of mercury and other items that may have been contaminated.

On Thursday, an excavator and several large blue storage containers were hauled onto the scene by Patriot Environmental Services, a contracted provider of comprehensive environmental services in the Western United States. “If [mercury is] detected, the EPA removes the materials for disposal at a permitted facility designed to handle the waste,” said Perez-Sullivan.

The garage fire started at about 2:30 p.m. on Monday in an alley behind the 400 block of Orange Avenue. First responders extinguished the flames within 10 minutes of arriving at the scene. Damage to the structure alone is estimated to be $20,000.

This is an ongoing story. We will publish updates as they become available.